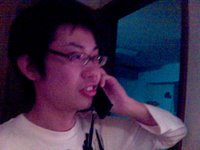 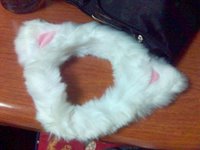 As I’ve told Qiuyue…this is a belated birthday present from Satoshi. He said that he went around looking for this because he calls me an “otaku” and “otaku” often cosplay (costume playing). Hence, he gave me part of a cosplay thing..as a birthday. I must say that I am NOT an otaku. Satoshi calls me one because I read manga and watch anime..and according to him, all his female friends are considered otaku to him. He and his logic…which can be rather illogical…ask me one day about him and his “Cherry Boy”! Oh…and that’s Satoshi talking on his mobile phone with his girlfriend…he was trying to avoid having his picture taken but he couldn’t escape! Hahaha…!