More on my holiday!!!

Day 4 – Tue, 2 Oct
I had booked a day tour for Gor and myself over the internet before leaving Singapore. So we headed off for the tour which included the Gothic quarters of Barcelona, Gaudi’s (http://en.wikipedia.org/wiki/Antoni_Gaud%C3%AD) famous works, the Spanish Village as well as entry to Picasso’s museum.
Thoughts – it’s rather intriguing that Barcelona has mainly Gothic architecture but there are few Baroque or Classical styled buildings around. Gaudi is an eccentric genius. All his works were inspired by nature and Gor commented that his buildings looked rather underwater. The most intriguing thing to me is that Gaudi is a man beyond his time. His architecture, designs and concept of living belongs more to this era than during his (late 1800s). You guys just have to check out his last work, the Sagrada Familia (http://www.sagradafamilia.org/) in order to only start to wonder at how his brain works.

Picasso, Picasso…another one of those geniuses that are hard to understand. Seriously, I don’t really appreciate his kind of art. I understand his contribution to the art world with regards to cubism, the thing about deconstructing and reconstructing. But…I’m really not into his art. I prefer Monet and Van Gogh thank you very much. Nonetheless, it’s quite interesting to see how Picasso’s art work transformed throughout the years. That said, the only work of Picasso that I like and appreciate is Guernica (http://en.wikipedia.org/wiki/Guernica_%28painting%29). It’s a huge artwork/ mural that’s just in your face. I like *grin*. Gor kept saying that he didn’t know that Picasso was Spanish (somehow the artists seem to come from France and Picasso seems like a somewhat frenchy name).

Ok…the tour ended and we’ve kinda satisfied our artistic soul. Now for some touristy and modern food! We went to the famous La Rambla for dinner and we chose a restaurant that was recommended by the guide book. What did we eat? Your typical paella with sangria and Gor ordered an additional tortilla. Now, in Spain, tortilla means omelette. It does not refer to the flour dough thingy that resembles roti prata. That’s Mexican.

Woke up lazily late (because we finally could!) and had brunch at some cafe (I think I ate donuts bought from the supermarket opposite our hostel though…Gor poo-pooed the donuts and threw them away ‘cos they didn’t taste nice. Wasting food is a sin, Gor!).

Then we spent the rest of the day shopping at Zara, Mango, Desigual and some other stores. Sing and Moon – you ladies will go nuts in Zara and Mango. The Zara in Barcelona is HUUUUGE. It’s 3 storeys, including the basement. I didn’t know until that day that Zara had its Home collection. Zara sells pillows??!! Their full price items are the prices of Zara items on sale here in Singapore. Ditto for Mango. 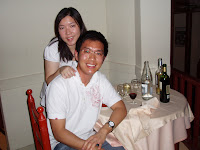 After a full day of shopping, dinner was at the Spanish Village with the flamenco show. I HIGHLY recommend this, even if you’re like my bro and you hate ‘artificial’ villages etc. Yes, yes, I know that flamenco isn’t very Barcelonian…it belongs more to the south of Spain (Madrid etc.) but it’s still a wonderful dance to watch. The guitarists who perform with flamenco dances are also FANTASTIC! Gosh…the way their fingers fly across each fret. Jealous. =P We paid EUR 64 each and this inclu 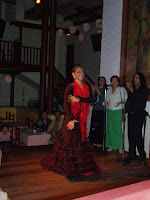 des a 4 course meal with a full bottle of wine each – unless 2 people order the same type of wine. Gor and I actually drank half a bottle of wine each. He had red, I had white. Pretty ironic since I had ordered meat for my main course while Gor ordered fish. My rational is this – bad red wine tastes worse than bad white. So unless a colleague/ friend/ family member orders the red wine…I’ll stick to white. Whites are fruitier anyway.

I really enjoyed the flamenco show and dinner but Gor just HAD to spoil some of my fun by joking about how they were stamping their feet and clapping. ( -_-;) Someone please skin him alive and give him a bit more artistic inclination!!

I think it’s the wine. We were just too lazy to wake up early. Haha…ate breakkie at a cafe that was nearer to La Rambla and then we just walked along La Rambla since we didn’t manage to get a good view of it the night before last. Did we do any shopping? Mostly Gor. We found Massimo Dutti. Need I say more? Yes…Massimo is A LOT cheaper than home. Now, why didn’t I buy anything from there? Cos I still don’t think I’m earning enough to buy blouses that cost SGD 100 or more. SGD 80 is already pushing it. SGD 100 and more are meant for dresses in my current cheapo shopping list.

Anyway, around 3pm, we went back to the hostel, repacked some stuff and headed off to the airport. Roma…here we come! Oh so we thought….

1. We were on a 7pm Iberia flight…which turned out to be a Clickair flight!
2. We checked ourselves in and rushed to the gate blah blah and even went into the plane only to get an announcement that there was a technical error on the plane and we were to be transferred back to the airport waiting area
3. It was raining and as far as budget airlines get, it’s a bus. There’s no nice thingy to connect plane to building.
4. No further explanation as to how long we’d have to wait etc.
5. We asked them whether an announcement would be made regarding the boarding and they said yes.
6. It’s 11pm…we checked again and turns out that we could board! Now…where’s that bloody announcement??!!!

It’s midnight and we finally arrive in Rome. Great. We missed the last train from airport to the city centre. There’s a sign about buses but when we tried to walk to the bus stop…we couldn’t find it. The taxi drivers there are HAWKS. They started asking us whether we wanted to take a cab and such rippers they are! They quoted prices that ranged from EUR 40 to 60. *Faint* We’re tired and we really don’t need this crap. Finally, we went to the taxi driver who agreed that he’ll only charge us what the meter reads. Thought while sitting in the cab: this guy could take a longer route to our hostel and we wouldn’t know. *Shakes thought away*

We finally arrive at the hostel at 1am. Meter read EUR 47. He charged us EUR 50 because of our luggage. Gor was dumbstruck. I told him that let’s not argue. EUR 3 isn’t alot to argue a lot to me…especially when other idiots were quoting us EUR 60.

Reached the hostel to check-in and guess what? They don’t have credit-card facilities because their machine broke down. This is how the conversation went (roughly).

Staff 1: Sorry, cash only. Our machine broke down. There’s an ATM further down the road
Gor: Well, that’s your problem isn’t it?
Staff 1: (repeats after my bro) That’s my problem….
Staff 2: Sorry…the machine broke down and we can only accept cash.
Gor: I don’t have cash. When did your machine break down?
Staff 2: It’s been about 2.5 weeks now.

Ok…at this pt in time, if I wasn’t tired and in need of a bed, my response would’ve been: “2.5 weeks?????!!!!! I may not know how Italy works but 2.5 weeks is way too long to leave a machine broken and unrepaired. Do you need help in getting it fixed? Just tell the credit card company that 2.5 weeks is unacceptable as you’re running a business, you’ve told your customers that there is credit card facility AND credit card companies don’t earn if credit cards aren’t swiped, right?” Anyway, back to the ridiculous ‘drama’ that was unfolding.

Gor: Well, too bad but we really don’t have any cash now. I don’t have enough Euros as I just paid the taxi driver EUR 50.
Staff 2: There’s an ATM just around the corner.
Gor: My card doesn’t work for these ATMs.
Staff 2: Do you have enough cash for 1 night then? It’s our policy that we receive full payment upon check-in…if not it’ll screw up our system and blah blah blah…
Gor: No. Anyway, I’ve already paid an online deposit. Isn’t that deposit a sign of good faith?
Staff 2: It’s not a matter of trust but it’s about our policy. (To staff 1) Could you call Eric? (back to us) What I can do for you is if you could pay for 1 night and I’ll cancel your booking for the rest of the nights. There are beds still available for the next 3 nights so finding a bed wouldn’t be a problem.

At this point, this illusive Eric couldn’t be reached and an Aussie guy who was working at the hostel’s Bar came through. He heard what was going on and asked Staff 2 to keep our passports and only return them when full payment’s made the following morning. Mind you, he said this to his colleague as if Gor and myself were NOT there. That ticked me off even more. Gor got ticked off even more as well. What happened to the “it’s not a matter of trust” bit? BS. Puhleese…most hotels don’t collect payment until you check-out.

Ok…anyway, to cut the long story short, Gor pretended to go to the ATM while checking out the hotels in the same building. They were quoting EUR 130/night but the problem was that they were full. Gor came back saying to the staff that just as expected, he wasn’t able to withdraw any cash. Anyway, in order to get some rest, I said that let’s heck it and just pay for one night. However, I told Staff 2 that we shouldn’t need to pay so much cash since we’ve already paid a web deposit. *rolls eyes* we even had to give EUR 10 deposit for the keys and bedsheets. Unbelievable.

The night was terrible. We had to share the room with 2 other blokes who didn’t come back to the room till 3am-ish? They tried their best not to make a lot of noise but they kinda spoilt it when they came in. I was woken up and you know how difficult it was for me to fall back asleep. To make things worse, we had to wake up @ 9am as we had to check-out at 10am. In a nutshell, we’re never going to stay at THE YELLOW (http://www.yellowhostel.com/) in Rome and I advise you to not stay there either.

It’s 10 am and we checked-out. We IMMEDIATELY went to the hotels opposite (http://www.hotelromae.com/en/) and found one that’s cheaper and -get this- PRIVATE! We didn’t need to share the room with others and we had the whole darn toilet to ourselves. EUR60/room/night in this hotel compared to EUR 75/pax/night in that hostel. No brainer. Although the fact that this hotel and the hostel are in partnership.

The yellow’s selling pt. – fun, fancy and stylish. Ok. Good selling pts. However, if you’re running a business…especially one that’s service oriented. Take a good look at your policies and how unhappy you’re making some people felt. Those who have a good time seem to be those who are more concerned about bar hopping and drinking. I don’t understand these people sometimes. You’re in a foreign land for a limited period of time and you’d rather spend the night drinking and clubbing? Hmmm…I really hope that most of them do take the time to see the sights. Ok enough of my ranting.