Let me retrace my holiday….

Day 1 – Sat, 29 Sep
5:05 am Landed @ Heathrow, dreary-eyed.
5:15 am Breezed through immigration and finished collecting luggage
6:05am Gor still isn’t @ the airport and unable to reach him on his mobile.
6:10 am The driver that Gor hired to pick me up (i was carrying 3 pieces of luggage thanks to someone) found me. Gor is STILL not at the airport. We decide to pick him up from the tube station instead. Noticed that there was a merc parked next to my driver and the merc driver was inside the car.

6:15 am Realised that the driver had forgotten to put my bag of Duty Free items in the boot!!! I dared not tell him that the bag contained more than SGD 700 worth of cosmetics…did a U-ie to grab that bag from the trolley. Now I’m wide awake.

6:25 am Driver went to the trolley and the bag wasn’t there anymore. I insisted on going to look for it myself. Noticed that the merc driver was still there. Tapped on the window. He took one look @ me and went “ah…wait!” Got out of his car, opened his boot and passed me my bag. Phew.

7:20-ish Reached Gor’s apt. The driver now has the cheek to want to charge extra for the accident!! Gor refused to pay. I would too. It was his fault for forgetting to place that bag anyway. Ok…sleeeeeeeeep……

10:30am Woke up and showered. Hit the tube and went to Canary Wharf as Gor forgot to put his ‘out of office’ profile into his office email. Btw, Windows Vista sucks for remote access.

3:00pm onwards – went to buy tix to “Lord of the Rings – the musical”; walked around Chinatown, Oxford Street, Regent Street.

7:30pm Watched “Lord of the Rings” and was quite disappointed. I nearly fell asleep during one period….but I have to say that the costumes, stage direction, stage design and lighting were very innovative and rather fantastic. Otherwise….it’s a big fat yawn from me. I really don’t think it’s jetlag.

(At 8 something a.m.) Sniffles. Dry, almost sore throat. Sniffles. Bloated. Went to the toilet and realised that my ‘friend’ has arrived. Great. Period AND a cold. Great.

Woke up yet again after 10am. Wasn’t too bad considering that Gor and I were to meet his friend, Phoebe, for dim sum at this 2 Michelin-star restaurant named “Yauatcha”. Food was pretty good (think Din Tai Fung, Crystal Jade and Imperial Treasure meet La Strada) but the whole set-up was too chi-chi and pretentious for me. They don’t even allow you to take photos inside the restaurant. Not of the food nor of yourselves. Seriously. It was quite funny how Phoebe ‘scolded’ my bro for making me eat Chinese food instead of ‘ang moh’ food. 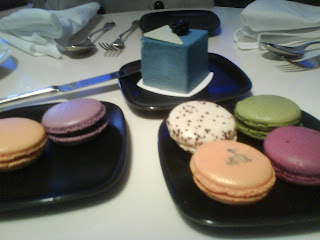 Look at the Macarons that we bought at Yauatcha! And that cake is a Blue White Tea cake that tastes a little like very light cheese cake with the slightest hint of tea. I still wonder what that blue thing was made of. I ordered it because it looked funky.

After lunch was yet another bout of shopping…walking along…um…oops, I can’t remember what street. Oh, we walked through one of the parks that led to Buckingham. After which, we walked through St. James’ Park to see West Minster. After that, we walked slightly further up to the River Thames to get a better view of the Millenium Eye. By then, it was 5pm and we had to rush for the 6pm mass. Singaporeans – please don’t complain about travelling half an hour to anywhere. Average travelling time in this city is an hour. Ditto for most parts of Japan. So don’t complain.

Mass was surprisingly good. I wished all masses in Singapore were that simple and that the homilies were that concise and filled with a message that was clear. Yes, I know that we can’t choose priests who speak well…but I think that priests should ALL take a course on how to be simple, concise and interesting.

We met Phoebe once more in church and after mass, all 3 of us had sore, tired feet that were in need of rest. Our stomachs also needed to be filled. At the lack of any inspiration or cravings, I mentioned fish and chips. That led us to Covent Garden. Unfortunately for us, ALL the pubs were not serving food by then. Strictly drinks only. Bah. Gor then reminded me that we’re in London. Europeans treat Sunday as the day to spend with your families and maybe a quick swig in the pub with your close mates. Ok. Fine. But we were hungry. Found a Japanese restaurant and not caring about the price, we walked in (the fact that actual Japanese were eating there was quite comforting too). Weird thing happened. The sushi chef spoke to us in Japanese and asked us how many people. Haha. I find myself speaking Japanese in England. Wonderful. Get this…a Katsu don here cost GBP 13. That’s SGD 36. For a bowl of katsu don. At least it was delicious.

Day 3 – Mon, 1 Oct
Woke up at….c’mon, make a guess…yes, after 10 am!!! Typical rainy London day. Too tempting to stay under the blanket. Anyway, decided that we needed to do some laundry and to cook lunch! I had brought this honey garlic pork rib mix from Singapore and it just so happened that Gor had bought pork ribs the week before. He also had chicken thighs. So we cooked the ribs with the sauce that I brought from Singapore and cooked some herbal soup with the chicken thighs. Yum.

After lunch, we did some last min packing and it’s off to Gatwick airport and welcome Barcelona!!!!!!!

Landed in Barcelona around 10pm and by the time we cleared customs, baggage claims etc, it was around 11pm. We took the Aeroport (bus) and I must say that it’s rather silly that the Aeroport, which is meant for people going to and fro the airport, has only 1 area for putting luggage AND the stairwell is narrow.

At this point in time, I’m feeling rather lethargic and my nose was completely stuck. Looks like my Clarinase only lasted for a couple of hours.

Thanks to clear directions from the hostel, we arrived there in one piece (each) and checked-in. Popped a panadol and went to bed.