Ok…I’m starting to get bored of blogging about my holiday cos there’s so much that I can say and that little time that I can do so. Anyway…back to my hols 🙂 Btw, I have also updated my previous posts on my holiday through adding pics etc. So do re-read them again if you’ve got the time and patience.

We walked around Rome with our trusty little map and here are the sights! 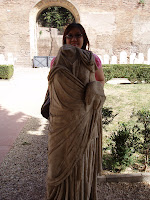 At the ruins of a Roman Bath. This was my idea and this ang moh couple there copied my idea. Intellectual property rights!! 😛 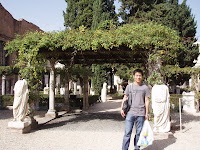 The view of the garden before entering the bath. There used to be more marble but they’re obviously gone. 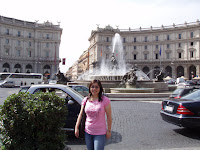 Sorry but I don’t remember the exact name of this piazza as there are too many piazzas in Rome and I don’t have my map next to me. Anyway, Rome was very sunny when we were there and you’ll continously see me in my sunnies. 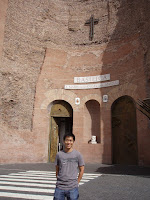 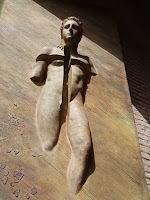 On the left is the front facade of the ‘Church of St. Mary and Matyrs”. On the right is a modern piece of artwork symbolising the risen Christ with his cross to bear. Don’t you just love the mix between old and new? I liked how it’s blended in rather than jarring in your face fusion. 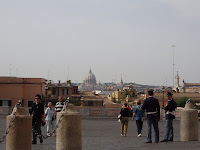 Our first peek of the Vatican City. That in the background is the St. Peter’s Basillica. 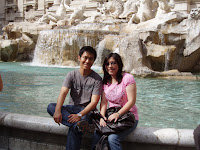 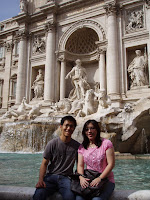 The Trevi Fountain in the background. The water was surprisingly cold and it was very clear. Threw 2 coins in….which means that I’ll be going back to Rome twice! Gor said that one coin was on his behalf (fair enough) and we’ll be going back to see the Vatican City Museum (something that we missed ‘cos we didn’t Q and didn’t realise that they don’t open on Sundays). 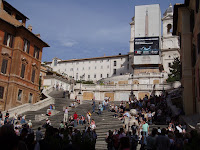 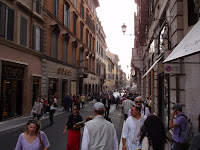 Ok, this street is facing the Spanish Steps and its quite non-descript if it weren’t for the lovely signages. I was in designer heaven with Gor constantly yanking me back to reality. Designer wet blanket! 🙁 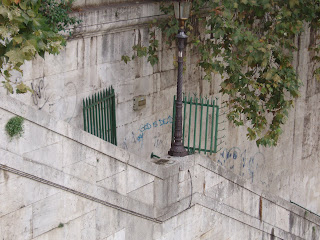 This is one really ironic vandalism that I just HAD to take. It reads “God is Dead”. On a bridge, in Rome with the Vatican City in the background (not shown). 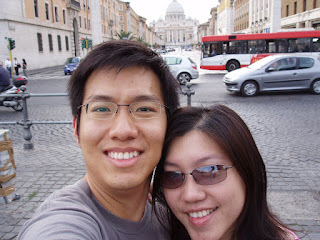 Lookie…that’s the Vatican City at the back! 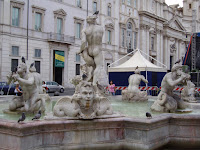 Ok…I dont’ remember this fountain nor the plaza’s name…Gor…Help. 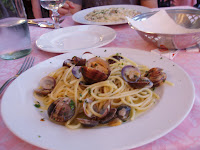 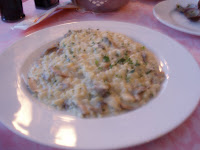 Dinner at the Plaza! On the left is my Spaghetti Vongole while Gor had the Risotto Fungi.
Verdict: Tourist trap. 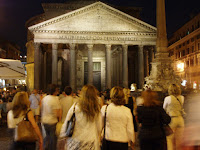 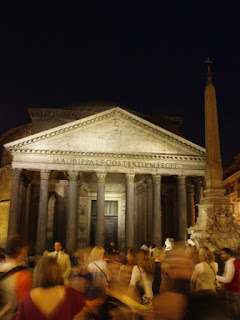 The Pantheon at night!

Day 8 – Sat, 6 Oct
We had aimed to wake up early today to go start queuing at the infamously long queue to the Sistine Chapel (Gor heard an American teen call it the Sixteen Chapel…hahahahahahaha). However, we only got up at 8:30am and took the metro there! 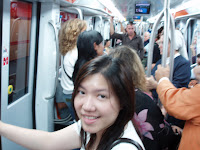 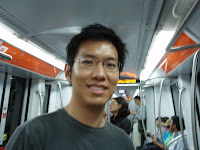 Pics of Gor and myself in the Roman metro on the way to the Vatican City. 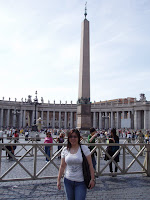 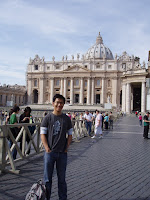 St. Peter’s Basilica!! The famous square, which actually is oval in shape, and everything else! Gor…need your input here. Brain is fuzzy about the details and names 😛

Anyway, as mentioned, we didn’t queue to get into the Sistine Chapel to see the famous frescos by Michelangelo because it was just horrendously long. Instead, we went to the St. Peter’s Basillica. There’s more queuing….we queued for a good 45 mins before we could even reach the front door of the Basilica!

In there, I overheard this Chinese tour guide misleading 2 Chinese tourists that those statues of the saints were statues of Catholic gods. -_- EXCUSE ME! Those are saints and not gods. He even told the tourists that Catholics worshipped those saints. This got my blood boiling and I wanted to give him a piece of my mind. He was telling untruths to those 2 poor chinese tourists who were actually smart enough to question with a “But wasn’t Catholicism the start of Christianity?” That stttttuuuuupid tour guide actually answered this question with a “Yes, they did but then they started worshipping Mary and then had other gods.” I was really pissed off by then and was shaking my head profusely while staring at BOTH the tourists and tour guide. Gor refused to let me go up to them and correct the stupid tour guide. Thinking about it, I should’ve gone up to them. Defend my faith. Haha. However, on a serious note, its disheartening to know that there are so many people who are severely misled about Catholicism. I have even heard this Christian friend of a friend insist that Catholics aren’t Christians. We would’ve gotten into an argument if we weren’t considerate enough to think about our dear friend. *sigh*
Previous postPrevious Post Next postNext Post