A lot to blog about

Wow…quite a load of things have happened within a span of 2 days and well…for those who love pics…be glad that this entry will have TONS of them.

Let’s start off chronologically so that its neater. My mum had received a bag of belimbing (sour fruit that apparently belongs to the starfruit family) 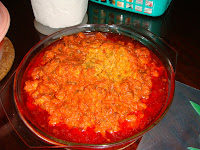 and she decided to cook it the traditional peranakan way (err…is there any other?). Voila (to the left)!! Its not chilli hot at all (although its bright red) but its sour and savoury. Reminds me of peranakan achar minus the peanuts. Love the prawns in there…yumm…..

I just HAD to blog about it because most of you prolly aren’t peranakan or have peranakan heritage so you wouldn’t have a clue what Belimbing is (side note: Marriott Hotel in Orchard has a meeting room named Belimbing room). 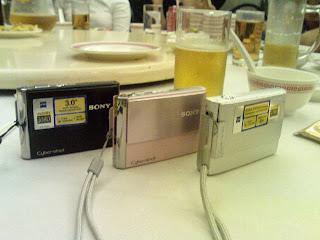 Had reunion dinner last night and guess what? Ailian and I have the exact same camera except that hers is black and mine is pink. Wenqing has a Sony camera too!!! How many cousins have the same camera??? 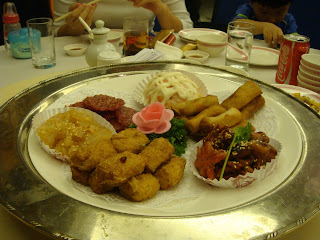 1st course – assorted platter of spring rolls, baby octopi (looks a little larger than the usual ones you get), ngo hiang, jellyfish, prawn mayo on a bed of mango and bbq pork. This reminds me of weddings already… (-.-) 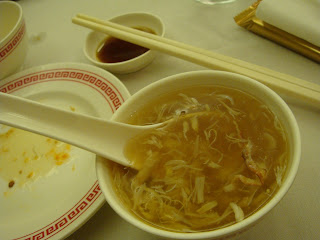 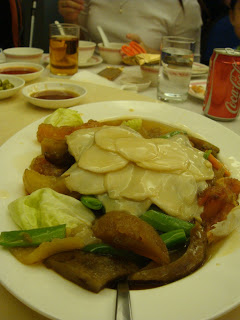 3rd course – sliced abalone atop pork tendon and sea cucumber. Here’s my critique:
Abalone = nothing exciting. It wasn’t tender.
Pork Tendon = passable but the gravy didn’t give it the oomph.
Sea cucumber = mix of soft and hard pieces. Uh…were they cooked at the same time??? 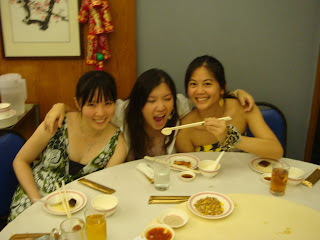 I was just pretending to be yau kwee ok….we did take nice shots with Ailian’s and Wenqing’s cameras. I want them!! 😛 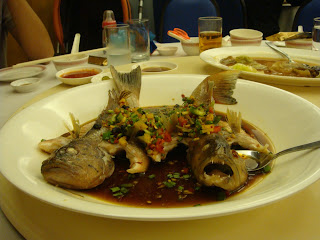 At this point in time…Zhi Jian was teasing how 3 of us were whipping out our cameras each time a new dish came and he even asked the waitress whether she had seen such people before. Haha….actually, Wenqing and I would’ve forgotten to take pics if it wasn’t for Ailian – our resident food blogger. 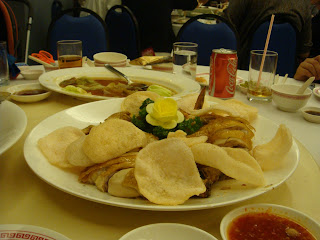 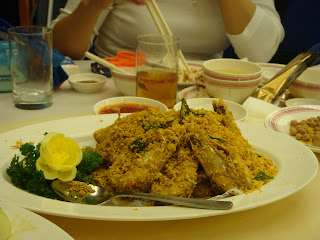 6th course – curry cereal prawns. Knowing how much butter goes into this dish just makes me stay off it…ate only 1. Not bad but…buutteerr…*cringe and looks at tummy* 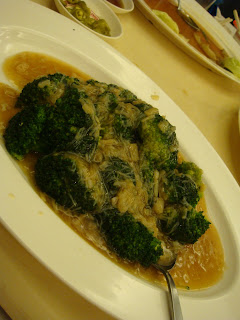 7th course – broccoli with shredded scallop. Ailian was disappointed that we didn’t get whole scallops (I feel you babe) and our nephew Ming Ming spat it out. Hey…veggie’s good for you!! 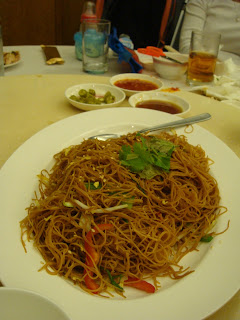 8th course – the usual fried staple dish. This time it is fried bee hoon. Not bad but as usual, we’re all filled to the brim at this point in time. Took a couple of mouthsful and left the rest behind. I know…we shouldn’t waste food but you’re not fat like me 😛

While waiting for dessert, we all got bored and started mucking around. Me admiring Wenqing’s 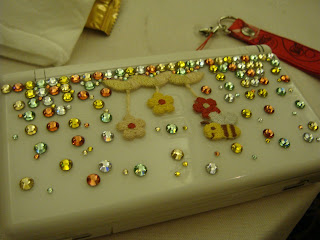 decorated Nintendo…amusing ourselves with our nephews’ reactions to having toy cars ‘stolen’ by my uncle. 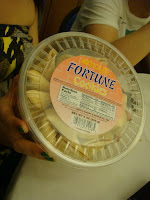 And then Ailian whipped out a box of fortune cookies that her aunt from the US bought.

Yes…fortune cookies…the not-quite-Chinese-but-yet-Chinese “invention” that Chinese outside of USA are exploring and are having fun with. 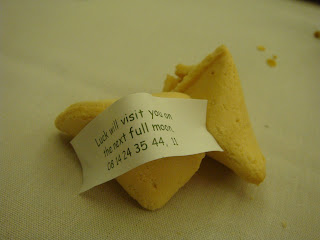 Here’s my fortune: Luck will visit you on the next full moon. I hope so. I hope and pray that OopsIWannaSay.com will take off 🙂 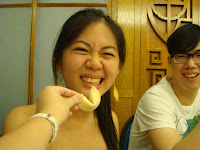 Dessert’s still not here and more mucking around. Here’s me ‘feeding’ Ailian a cookie and she looks pained. Wenqing has another shot where Ailian looks as if she’s eyeing my cookie. Haha…again, I WANT THAT SHOT!! This one’s funny though…hahaha….. 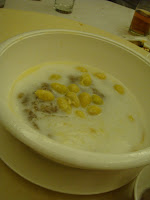 Finally…dessert arrives. After distribution…its a pathetic amount in our bowls. Less than half man…and it seriously, looks better than it tasted. Ah well…at least that wraps up dinner!