What is wrong with people? 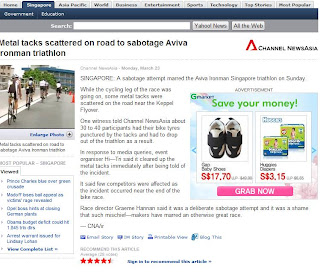 I happen to read all these news this morning and I’m appalled at people. What’s wrong with these people? Talk about humanity. Sometimes I think humans are less than animals. Take the pic above, some idiot actually threw metal tacks during the Aviva Ironman triathlon, causing 40 racers to drop out of the race because their bikes were punctured. At least they didn’t get hurt. Imagined if their bikes were punctured and then they fell on those metal tacks?? WHY the heck did that person throw metal tacks? Sheeesh. Yet another case. This woman gave birth mid-air and then abandoned her baby in the bin!! Oh my goodness. How heartless can one get? Why did she bother carrying the baby to full term even? What was going on in her head? Oh wait…air sickness caused her to not think properly?? -__- 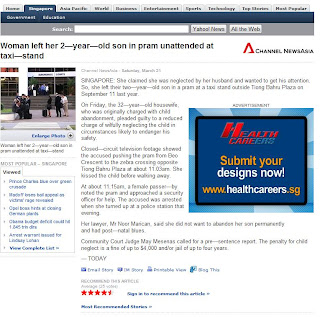 Before you think that this only happens overseas, think again. Above is the news about a Singaporean mum abandoning her baby in a pram at a taxi stand. Her reason? To get her hubby’s attention. What kind of stupid, irresponsible mother is she? Wanna get your husband’s attention? Go buy some kinky lingerie and do a lapdance on him when he gets home. That oughtta get his attention.

What’s wrong with these people? Sheesh.