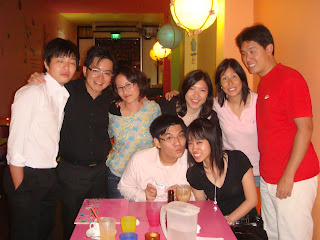 We planed a surprise birthday party for Alex (he actually ‘complained’ to his gf that we probably had forgotten about his birthday…HAHAHA) on Fri @ Miss Clarity Cafe, Purvis Street. The whole concept of the cafe kinda reminds me of the cafe version of Surfer Girl where there were bright colours and cutesy cartoons. 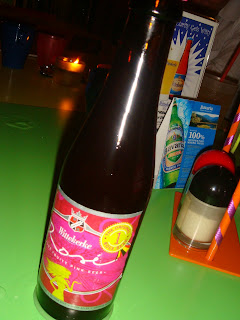 First up – we ordered a bucket of Rose beer. Now, there’s supposed to be a line above the ‘e’…so its not the flower but rather a reference to the hue of the beer. It is a beer that I’d actually drink because its fruity, sweet and doesn’t have that characteristic bitter after taste of the usual beer. Not bad considering that we only paid $40 for 5 bottles. 🙂 Xan found it too acidic or gassy, which caused him to be unable to finish up his mains. Such a waste. Ah well…

Anyway, most of us ordered their sets (very reasonable!!) 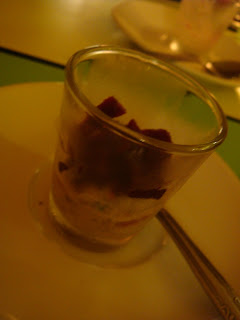 and the sets come with a pre-starter (a.k.a. amuse bouche. Say..amuz bush).

The amuse bouche is a mousse of probably some chicken or tuna and topped with beetroot cubes.

Traditionally, the amuse bouche is supposed to tingle the taste buds and to prepare guests for the upcoming meal. Moreover, it is supposed to showcase the chef’s 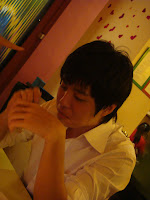 Alex, Chowchow, Sing and I shared a dozen escargots, which surprisingly came with a twist – they were spicy! Interesting. Having to dig them out with a satay stick kinda ruined that “ooh…we’re eating fancy stuff” mood. 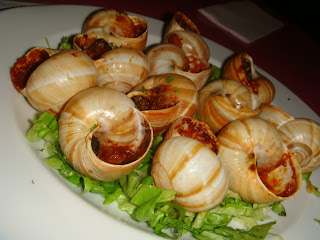 Sing happily ordered the foie gras (say: fwa gra) as a starter to share as well. I loooooove foie gras despite the whole hoopla about the geese and ducks being forced fed (they’re gonna get killed anyways…so what’s so cruel about fattening them up?). The slightly caramelised onions 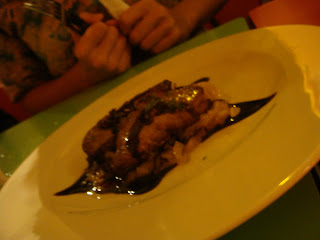 that were served with the foie gras was excellent and made a good combination. However, I still feel that Garibaldi’s and some other upmarket restaurants still do it better. How so? Well, these other restaurants that I’ve eaten foie gras at manage to pan fry the liver till its slightly crispy on the outside but oh so tender and soft on the inside. That takes skill man!! I doubt I’d be able to do the same. I’d prolly burn the outside to a crisp.

I ordered a duck salad and it was good! Although I wished that they had given me a knife to cut the really large leaves. Oh, and I had asked for the 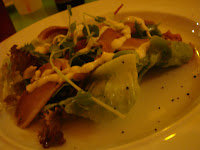 dressing on the side but they had forgotten. Ah well, at least they’re not like other places where they drown the salads in dressing. So, its forgivable. 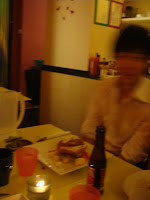 Xan was trying to avoid me taking a pic of him! Ah well…that’s him with his fish cordon bleu (say: core don bleuh…NOT core don blue). I pronounced it correctly and the rest of the table thought I was making a joke that Xan was ‘blur’ as he didn’t hear the waiter asking who was having the fish cordon bleu.

If this is the first time you’re hearing about a fish cordon bleu, you’re not alone. Normally, its two pork schnitzels with cheese and ham in between. In this case, its two pieces of fried fish with cheese and ham on top of one of them. Hmm…didn’t try it as I was trying to finish up my steak. 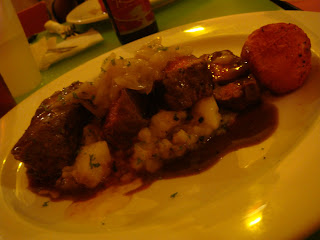 Tada….my Black Angus steak – supposedly Medium rare. Hmms….I miss my Stuart Anderson’s Black Angus steak already. BUT I must say that Miss Clarity’s Cafe’s steak is value for money. Where else can you get a Black Angus steak for $18.80? This is even cheaper than Botak Jones’ Sirloin steak (going for over $20 if I remember correctly.) All they need to do is improve on the grilling of the steak and they’d really make this dish ‘WOW’. Oh…more caramelised onions too! 🙂 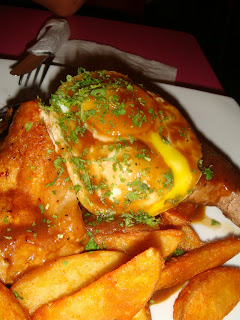 Alex ordered the palette cuts (a.k.a meat platter). It even comes with an egg (didn’t notice this until Alex pointed it out)!! There were potato wedges, sausages, ham, bacon, steak, chicken and lamb. If you love meats – this is it! Alex actually had trouble finishing this up. Maybe they can start some contest about finishing this up in 10 mins….hahaha….

For dessert, I ordered the Banana Tart and this is the single dish that I WOULD NOT recommend to you. The vanilla ice cream was the only thing that I finished. 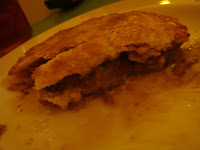 Some how, the tart itself tasted a little sour and odd. It didn’t go well with the ice cream either. I thought it was just me but Alex the monkey (haha…he loves bananas la) took a bite and he too stopped at that bite.

Their mud-watever (sorry, forgot the name) and their mocha dessert (oops…didn’t get pics) were much much much better for sure. Must be fate that I ordered the banana tart – curb my dessert intake!! LOL.

I didn’t manage to take a pic of the cheesecake that we ordered because I arrived late. Technically speaking, I had arrived at Purvis Street at 7.10pm but I spent a good 20 mins circling around the area for a carpark lot and ended up parking at Raffles Hospital. Some of you must be gasping and saying, “But that’s so far!” Umm…its only about 10 mins walk away? Not that far. Same distance from my place to Queenstown MRT. The parking after 5pm is cheap too – $1.83!

Conclusion: we had a swell time talking and catching up on Fri night. Best thing is that Alex was happy that we didn’t forget his birthday and we even surprised him!! 🙂 Cheers Alex! Have fun!!