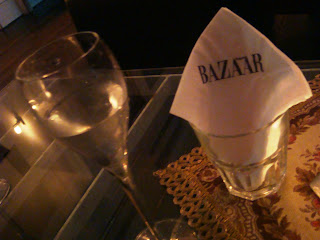 Went to Harper’s Bazaar Absolut Party tonight together with Mel Li (my fellow self-employed fashionista..teehee) and yes, I did wonder what this party was about. Was Absolut launching some new type of vodka?

Learnt half way through the night that it was just an excuse to have a party and to kickstart the Audi Fashion Week with a slight bang.

The party was held at Mimolette (next to the Saddle Club) and I love this place. The decor’s so chic and love the room upstairs. Its cosy, full of an eclectic mix of things and the chairs there are sooo comfy. Only thing that I don’t like is the horse ‘fragrance’ that hits you when you step out of the taxi/car. Oh…and that it is quite out of the way. But then again, that is its appeal as well.

Mel Li says that their Macaroni Cheese is divine but this is the first time that I’ve eaten anything out from their kitchen but the canapes are yummy. The creme brulee was good too! They were presented on individual plastic spoons that look like your chinese spoons. I would’ve loved to take pics of those but its kinda hard to juggle my drink, clutch and the spoon. Besides, I think I would look rather swa-ku doing so. We’re at Mimolette with all these chi-chi tai tais and fashion people. Thou shalt not make thyself look a fool. 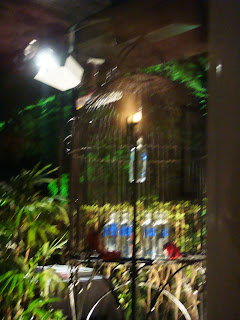 Absolut is one of my fave brands in the world. The bottle itself is so iconic. Would love to elaborate about its origins and how its soo iconic but I shall do that another time.

The first pic is that of vodka with passionfruit. Yummy! Like the champagne flute too (Veuve Cliquot, if you wanted to know). Quite impressed that Harper’s Bazaar was bothered to have napkins with their logo printed on them too!

Since its meant to be an Absolut party, check out the deco! Its a huge bird cage with bottles of Absolut vodka and a red high heel ala Devil wears Prada. Makes absolut sense 😉

Drink count: 1 vodka cranberry, 2 vodka passionfruit and 1 vodka goodness knows what (thanks Natalie). The vodka cranberry was weak. Tasted like pure cranberry juice. Haha. No, I’m not an alcoholic. 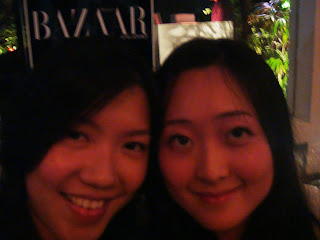 There were models in the crowd and it was quite irritating to see these tall lanky women dressed to the nines. They didn’t even try hard to be made up with inch-thick make up. They dressed simply and classily. Quite enviable.

Celebrity spotting: Benedict Goh and Shabnam Melwani-Reis. Benedict Goh looks good with his new hairstyle. He was with a bunch of friends and they sat near the bar sipping and chatting.

Ms Melwani-Reis had a very cute mini Birkin in orange. I think its the 25cm one. I just called it the baby Birkin but I’m not sure whether that’s the proper name.

Wanted to take more pictures but it was a very chi-chi fashion industry party where it was an excuse to just drink and chit chat with friends. You could see that most people knew each other and there was only one photog who went curiously missing after 10.30pm. Maybe he was drinking too…haha, don’t know. I was just enjoying the drinks. There wasn’t much to snap anyways.

Spotted tons of Chanel 2.55s in all shades and colours, including the limited edition Union Jack one. Saw someone carry a limited edition Veneta Bottega bag too (ooh, the leather must be real soft…I wanna stroke it…hahaha). Tons of clutches (myself included) and this lady carried the Fendi oversized clutch. 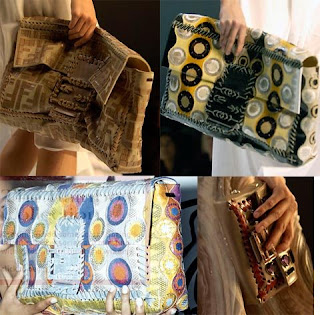 I like the look of the oversized clutch but somehow, I think that you would tend to grab the whole corner of the clutch, which bunches the sides etc and it doesn’t look that glam anymore. Can I say that they are extremely expensive things that look like folders? But yep, oversized clutches are the ‘in’ thing spilling over from last fall/winter collection.

The party was good to people-watch. There surprisingly weren’t a lot of air-smooching. You’d expect tons of it when it comes to high society and the fashion industry.

There was this woman who typified the kind of person who wasn’t cool but has cool friends, invited to cool party/club by cool friends and therefore, she tries so hard to be cool. Know what I am talking about?

Let me now describe our situation. We went to the loo and she and her friend came in shortly after us. I was washing my hands at the sink and she started admiring her reflection. Fine. We’re all vain people. Mel Li & I were having a conversation at the sink since Mel was washing her hands while I was finishing up. She walked in between us and started doing this posy pouty thing to the mirror. Ughs. That woman had a serious case of backne too but it was kinda semi covered with her sheer shawl.

Anyway, we walked to the couches after that and we couldn’t really be bothered with that ‘extra’ person despite the fact that she walked in between us while we were having a conversation. Her trying-so-hard-to-be-cool act kicked in again when she walked towards the end of the room (where there was a side chest of drawers and a mirror) while fanning herself with a chinese fan and trying to ‘boogie’ to the beat of the music.

Her shawl was now oddly draped only on her right shoulder, looped somehow through her bag and some was left hanging and I wondered whether it was going to fall onto the floor. As she suddenly walked across the floor to that chest of drawers, the group of people who were already huddled there in conversation looked at her with quizzical faces. Don’t blame them as that ‘extra’ looked as if she was walking towards that group of people and wanted SOMETHING. She then quickly picked up a copy of Harper’s Bazaar Daily and then proceeded to study the damn thing very intently. Its only 3 pages for goodness sake. More pictures than anything.

She reminded me of this girl in secondary school whom nobody liked and she was relegated to being an outcast. Quite mean of us all and the whole thing is sad actually. I feel guilty whenever I think about her. I don’t even remember her name. She transferred to another school in Sec 3 because she couldn’t stand not fitting into ANY group. Her problem, like this ‘extra’, is just trying too hard to be cool. Just relax, don’t try to be busy doing something all the time and most importantly – be yourself.

Since the party was on a Wed night, most people started leaving by 10.30pm. We kinda got bored with the dwindling numbers, lack of male eye candy (approx 80% attendees were female) and well, we hardly knew anyone there (was pleasantly surprised that Natalie remembered my name though. Must be my surname). Left for supper of fries and tissue prata after 11pm. Am feeling a wee bit tired but very fulfilled in general.

Can’t wait for my free facial treatment tomorrow (or rather, later today) at Touche as well as Fri outing where I plan to walk into Hermes as if I own the place (ahahaha). C’mon…haven’t you ladies wondered how the inside of the flagship Hermes in Singapore looks like? Yes, I’m referring to the one at that corner next to Zara and opposite the Thai embassy. I highly doubt that they’ll allow me to snap pics (yes, how disappointing) but hey…cheap thrill that you can try one day!

Okie pokes, off to bed to catch some beauty sleep. Toodles!