Much Ado About London…. 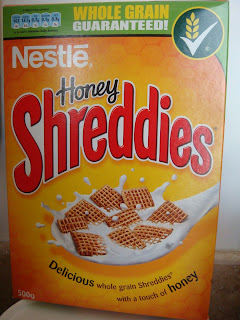 This post is entitled “Much Ado About London”…so please be prepared for a super long post. Okie dokes, moving on…I love this cereal. It’s so yummy and its full grain! I can snack on this all long. I’ve been eating this for breakfast for the past week (except when I had scones from Waitrose – that rocks too!). Can’t find this in Singapore right? 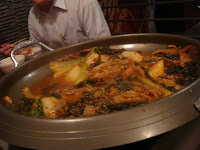 Went to watch “Star Trek” on Fri night but before that, the whole bunch of us (mix of Singaporeans, Malaysians plus 1 American and 1 PRC) met up for dinner at this Korean restaurant named Corean Chilli. 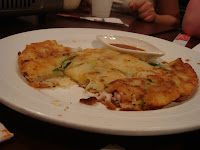 That’s Pork Ribs & Veg Hot Pot on the right and a seafood pancake on the left.

You must try their fried rice cakes with fish cakes in spicy sauce. Its like those that you see in Korean dramas and this restaurant makes it SPICY! 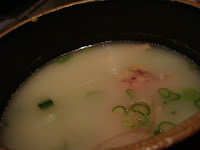 On the right is Gor’s beef bone soup. Non-spicy since Gor is allergic to chilli. Quite nice but it has a very strong beefy taste. 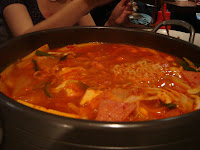 To the left is another hot pot. This time its rameon, rice cake, veggie and beef. I didn’t eat it but it looks like a whole blob of red. When it came, the rameon was the dried instant noodles and all of us went, “Maggi Mee!” Hmms…would you pay GBP22 for instant noodles? Ok ok…it came with lots more stuff in it. 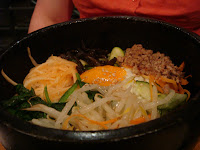 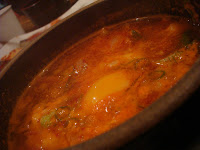 To the left is my beef veg stew. Looks good right? There even is an egg inside.

Taste-test verdict? Um…disappointing. I’d rather you go and eat this particular beef stew at the Korean restaurant at Amara Hotel in Singapore.

That being said, the restaurant is pretty good. If you’re in London, take the tube and alight at Leicester Square. Exit towards Chinatown, turn left when you come out and just walk straight. Its the first restaurant that you’ll see once you cross the street. Corean Chilli. 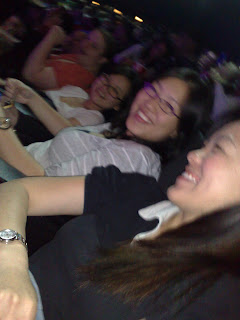 “Star Trek” at the IMAX theatre was good!! Its a bit like watching it at the Omni theatre in Singapore just that its not half a dome but a huge screen that seems to stretch from floor to ceiling. Most certainly did make the action seem a little more exciting. The movie wasn’t 3-D though. Now, I am a little thankful that I didn’t win the free movie tickets to “Star Trek” before I left Singapore. Hee. =) 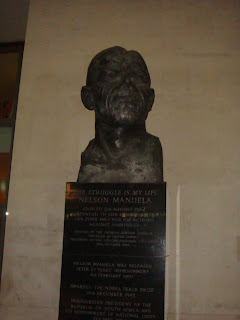 We watched the 11.30pm screening but it started a little late. It was approximately 2.15am when it ended.

Gor and I had to walk from the IMAX theatre in Waterloo to Trafalgar Square to catch a night bus home.

While walking past the Royal Festival Hall, I spotted this Nelson Mandela bust.

The Brits seem to love him a lot. He celebrated his birthday last year in London with tons of celebrities like Oprah Winfrey. 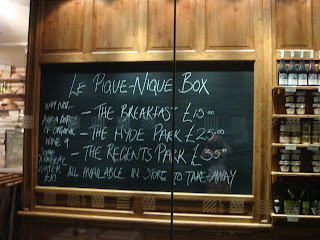 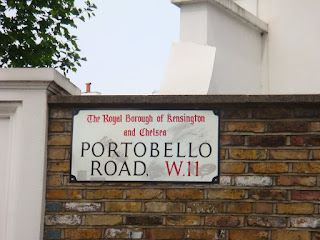 On Sat, we went to Portobello Market, which is near Nottinghill. There were loads of vintage jewellery (not willing to buy any for GBP 5 each) but I bought a miniature tea set! Keep watching this space to see how I make them into jewellery! 🙂 Lovely weather! Sunny and temperatures were around 20 deg C? 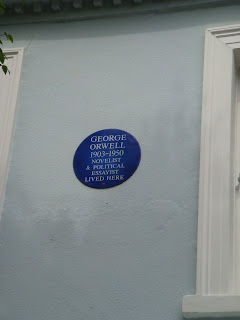 While walking towards Portobello Market, we spotted this house, which George Orwell lived in. He wrote “Animal Farm” by the way. 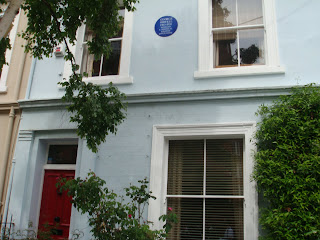 I love how all the houses here were painted blue, red, yellow etc. Funky!! Bursts of colour are always nice. 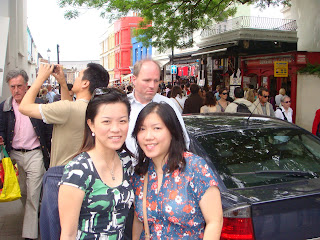 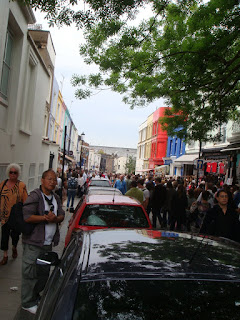 That’s Portobello Market in the background and it stretches far far down. We spent 2 hours just walking up and down. Gor and Sharon didn’t believe I could take a nice picture of the market with me just stretching my arm out and snapping. Hah. Proved them wrong. Not blur too! 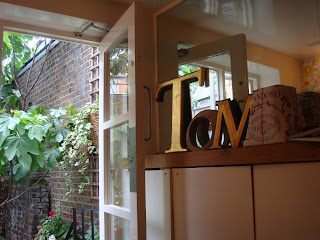 Gor and I didn’t eat breakfast since we woke up at 11.30am on Sat so we decided to pop into this brunch place called “Tom’s” which is located at Westbourne Grove…just a short walk away from Portobello Market. The place is really crowded and we were placed in some cosy corner and there was this stairs that led to a small garden with 2 tables. All taken, of course. 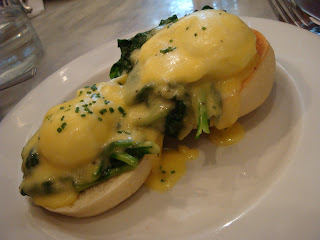 My Egg Florentine – poached eggs, with spinach on English muffins and topped with Hollandaise sauce. My bro wants me to tell all you readers that this was very expensive…it costs GBP 8. Taste-test: yummy. 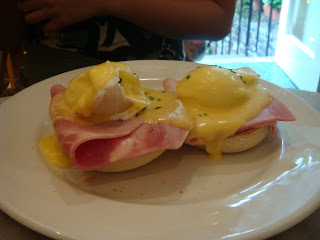 Sharon’s Egg Benedict – poached eggs with ham on English muffins and topped with Hollandaise sauce. She quite liked it. 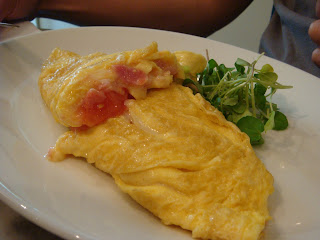 Gor’s 3-type omelette – eggs, ham, cheese and tomato. The taste of the ham was quite strong….but quite fluffy and yummy. Gor was grumbling cos I made him cut the omelette into half and place one half on top of the other just to get a nice shot. Sharon was laughing away and saying, “Of course…you need to show what’s inside!!” 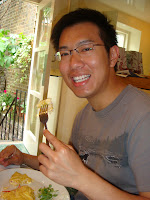 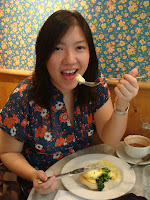 Happy munchers!! I think my shot of Gor is nicer than Gor’s shot of me cos I actually said “1,2,3…” whereas my bro was taking soooo long to take this pic. My jaw was tired from just posing. =P Ooh…my top matches the wallpaper. 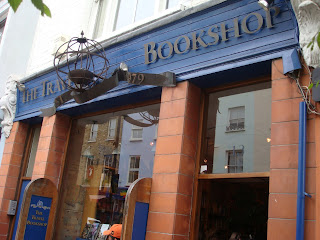 Tada…the famous (actual) bookstore that was used in the movie “Nottinghill”. There was someone snapping shots INSIDE the bookshop but I felt that there wasn’t a point as the place is already refurbished since the movie was filmed. The inside (and even outside) looks completely different from the film. 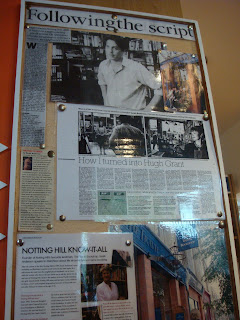 There’s a small noticeboard with newspaper clippings about the movie etc. 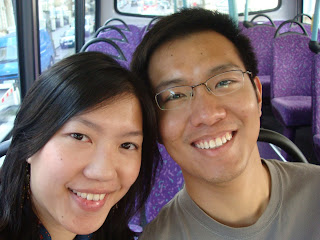 Random self-cam shot of the new bus (neither Gor nor Sharon had the luck to sit on a new one prior to this). Purply seats…reminds me of Barney. Not a nice shot of me…but heck, too lazy to reshoot.

We took the bus from Nottinghill to Oxford Circus. Not to shop (although we ended up doing so. Sing & Moon – got your souvenirs already). We were there to meet a couple of other people for dinner at this place called “Le Relais de Venise” where they only have 1 main course – L’ Entrecote steak. 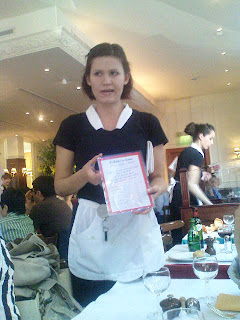 Their waitresses’ uniform is like the typical French chamber maids!! So cute. Like those maid cafes in Tokyo too…but the waitresses here don’t act cute. 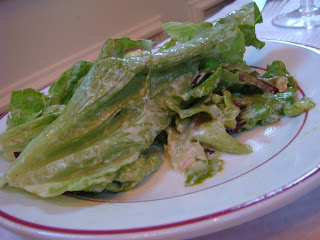 First up – salad with walnuts. I hate the mustard dressing that faintly tastes like wasabi. Yucks. 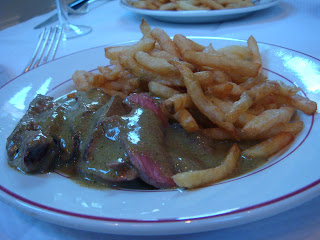 The mains!! Thinly sliced beef that is very very tender. The sauce is supposed to be the highlight and its (but of course) a secret recipe. Taste-test: sauce is made of olive oil, basil, garlic and a squeeze of lemon. Perhaps some mint inside as well. The fries were excellent as well! Before you think that this serving is small (yes, that was my initial thought too), they will come around with a second serving once you’re done with your first. Their reasoning is that they want you to enjoy the steak at its best temperature etc. All of that for GBP 19.99. 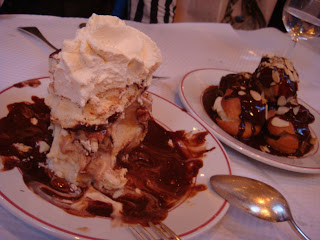 Since there were 5 of us, we went all out on dessert! Profiteroles and this layered meringue thing with ice-cream. Haha…the menu’s in French!! We just asked the waitress what was good to share. Well, the GBP 19.99 that I mentioned earlier doesn’t include the dessert. Our bill came out to be GBP 23.10/pax.

Le Relais de Venise
120 Marylebone Lane
London W1U 2QG
Tel: +44 20 7486 0878
They don’t accept reservations and they open for dinner at 6.30pm. Be there early because we ended our meal at 9 plus and there was a queue around the building.

By the way, that’s pronounced as Mile-bone (with a slight ‘le’ in btwn) Lane. Looks like Mary-ler-bone to me…but yeah…just like Leicester is pronounced as Les-ter, Covent is cor-vernt, Gloucester is glous-ter…the list goes on…I’m just as confused as you are. =P

Previous postPast week in London Next postRandom things that happened