Yes!! I have finished the mad dash that is known as translation!! Gor had said, “Why are you taking so long.” and this was echoed yesterday by his flatmate. -__-; Excuse me…direct translation may be easy but with any proper translation, one has to reinterpret the lines so that it suits the English grammar, regular speech AND we need to ensure that puns etc aren’t too lost in translation. Moreover, for manga, I’ve got to take note of the space of the speech bubbles plus manga tends to have loads of slang and sound ‘words’. Complained to a friend who used to translate dramas/ anime and he completed understood my irritation.

Anyway…Vol. 14 of “Ouran High Host Club” is translated!! I’ve sent it to my editor and the editorial team will work their own magic on it. 皆さん、よろしくお願いします！いつも日本語を助かったの友達は本当にありがとうございました！！ 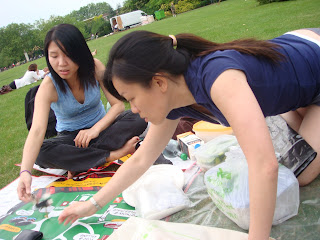 Last Mon (omg…has it been a week already?), we went for a picnic with some of Gor’s friends (soon to be subsumed by me as ‘friends’ too) at Regent’s Park, which is near Baker Street. Mon was a bank holiday here in the UK, hence the crowd in the park. 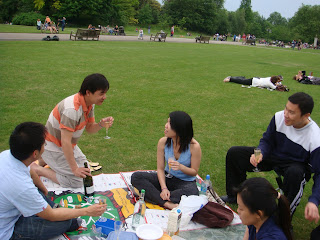 I think I brought the sun with me because London has been rather warm for the past week. And by warm, I mean in the 20s…which is uncommon!!

The guys played frisbee while the girls laid out the mats and food (how typical). We were all crossing our fingers that it would not rain (forecast was thunderstorms) as we wanted a nice picnic AND some of us were going to watch “Much Ado About Nothing” in the open air theatre in Regent’s Park. 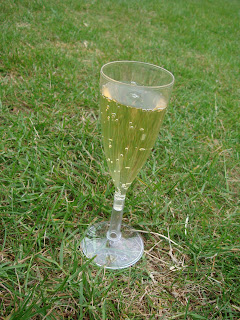 We had bubbly! Nice…a little bit of posh to counter our spread of chicken rice, chips and sandwiches (Gor and I made egg mayo and tuna sandwiches!). 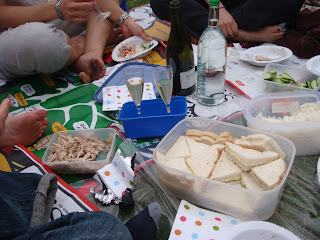 Sharon made the chicken rice and chilli sauce from scratch. Power!! Most of these people in this picnic have been living in London for more than 10 years…so they were really happily chomping on the chicken rice. 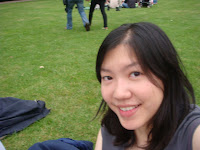 Such a nice day and I was the only one snapping pictures. =P

Dr. P was late (yes Gor, that’s my nick for you-know-who). He came at 7pm when we had arranged to meet at 6. We were all shushing him because he had kept reminding us that the forecast was for thunderstorms and that it always rained on a bank holiday…

Guess what? He was right. We felt a drizzle but went, “Oh…it’s a passing cloud.” We were in total denial. Soon, the rain drops got heavier…so we had no choice but to pack up and seek refuge in the nearby cafe. Murmurs of “will they cancel the play?” started and Dr. P went, “Nope. This is not heavy enough. I have sat through plays where the rain was heavier than this.” (-__-) Depressing to think of sitting in the rain to watch a play…

Luckily, the rain lightened and it was relatively dry throughout the play. There were gusts of wind and it was chilly though. It was quite funny how all of us opened our brollies when it started raining a little heavily, pulling it down so that it doesn’t block those behind us and then promptly closing them once the rain lightened. Instead of thunderstorms, we had intermitten showers, which is much better I think.

I like the play!! It is as good as most Shakespeare plays are!! It’s amazing how old these plays are but they’re still a joy to watch. The actors were very good (although Gor kept muttering about seeing their spittle while they were saying their lines). 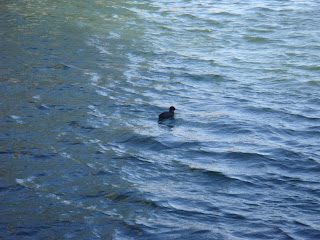 I spotted a duck on Sat at Canary Wharf!! Even saw a squirrel yesterday downstairs. There’s wildlife in this urban centre!!

On Sat, Gor and I went to the Arts Academy to view the Kuniyoshi art exhibition. Kuniyoshi is a Japanese artist who lived during the Edo period and has produced many prolific woodblock artworks. I had bugged Gor about it for the longest period…so…we finally managed to do it on Sat!! 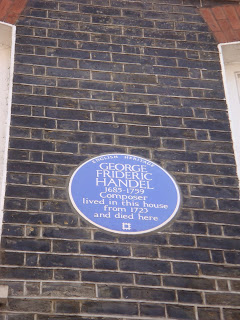 While we were walking to the museum/art academy, we actually passed by the house that Handel lived and died in. Gor thinks that he probably composed ‘Messiah’ in there. I’m in awe whenever I’m literally touching history. That’s probably also why I liked visiting Rome. 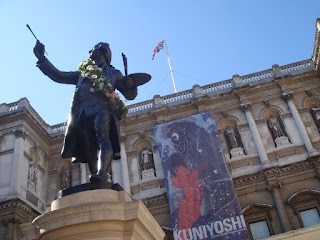 I like this picture because there’s a juxtapose between the Japanese art and the English architecture. I could go on about the artwork of Kuniyoshi…but I think I’ll save it for another time. I might end up writing an essay. One shocking thing was that it was CROWDED. The only times I ever saw such a crowd in Singapore museums were when Singapore brought in the art from the Vatican City and when the Peranakan museum opened. If this exhibition was brought into Singapore, it’ll be the perfect outing for us JS peeps. でしょう？

Guess what? Found out that the Reynolds Room in this Royal Art Academy is the same room where Charles Darwin presented his famous paper on evolution!! Wanted to take a picture of that plaque but was wondering whether I’d be caught…especially when there were so many cameras around. 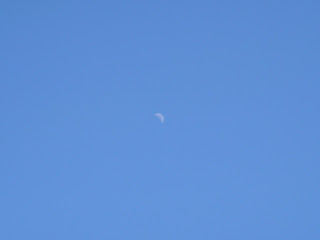 Oh, check this out. I took this picture at 4.30pm. Look how bright the sky is, how cloudless and…there’s the moon! *Gasp*

After the exhibition, we were walking along and we happened to pop into this Japanese tea/ traditional sweets shop called Minamoto Kitchen. I felt like I had gone to Ginza. The staff were all Japanese, dressed in kimono. There was a table and bench with a large red paper umbrella where you could sit and drink tea/ eat snacks. Really a taste of Ginza…at Ginza prices too. The average price was GBP 2 (about SGD 4.50) per piece.

We walked to Carnaby Street again and I went into shoe heaven at Irregular Choice. The shoes are sooo unique and I had loved them since the first time I saw them in Singapore. They’re sold in some shops in Haji Lane as well as Isetan (I think) but each pair is sold for around SGD 300. Over here, the average price is GBP 60-70. So do let me know if you want any!! Drop me an email at melissa.fann@oopsiwannasay.com with the model no. and shoe size once you’ve viewed their website (link is given above, just click on ‘Irregular Choice’).

Ok…I’m pooped…I’m gonna chill and shower and then catch on sleep. Adios for now!!