Had a very packed weekend…continuation

On Sunday, my bro had organised another get-together with another bunch of friends. This time, we had lunch with them at this fine dining restaurant called Arbutus. Gor and I had eaten at their sister restaurant Wild Honey where they served wonderful honey comb ice-cream.

Anyway, I just found out that Arbutus is owned by a Michelin-star chef as well as Will Smith. They claim to use the freshest seasonal ingredients and to make it simple and affordable. Hmm…one of Gor’s friends said that she had the exact same menu at Wild Honey. Fresh, seasonal but unimaginative? Anyway, the company was great as always…but here’s the taste test! 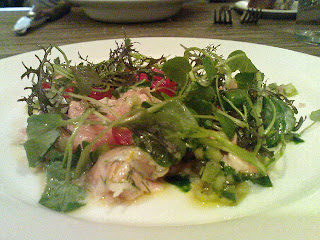 My starter of a salmon Salad. The salmon must’ve been sitting in some vinaigrette or some acid because the salmon was semi-cooked and was very tender. The dressing wasn’t too sour and complimented the vegetables and salmon perfectly. Yummy! 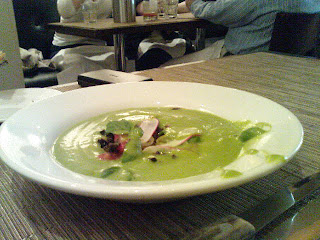 I ordered rabbit for my main course…and in my hunger, I forgot to take a picture. Oops. 😛 It rabbit stewed in a creamy mustard sauce with new potatoes, broad beans and petit pois (hahaha…that just means peas). The rabbit tasted like chicken with a ducky aftertaste. Sure beats the stir-fried rabbit that I had in Beijing though. 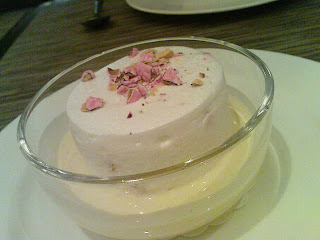 Dessert was called “Floating Island with Praline on a sea of vanilla cream”. That floating island is a meringue with bits of crushed praline inside. The dessert was good on the first bite but then became increasingly too sweet. It isn’t something that I’ll crave for and order again. What I’m interested in is how they managed to make the floating island come out in a nice disc like that…hmm….

Would I go back there if I had the chance again? Hmm…well, I must say that I wasn’t too impressed by them. I’ll go if someone pays for me! Hahaha!

Time really flew by and it was already 4pm by the time we finished lunch (we started at 2pm)! Then…as a huge group of 10 people, we headed to a nearby cafe for coffee/ tea to chit chat till closing time (5pm). 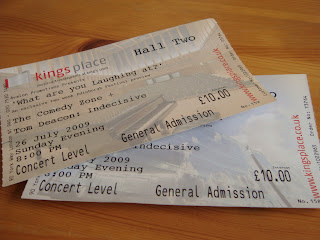 That evening, Gor, myself and P went with some others to watch a comedy fest preview. For GBP10, we watched 4 stand-up comedians do their thing as a preview for their material in next month’s Fringe festival in Edinburgh, Scotland.

I must say that I enjoyed myself quite thoroughly that evening and I do wish that Singapore had more stand-up comedians or pubs/ bars with more open mic days etc.

Well, it is about a week before I return home and I can’t wait!!