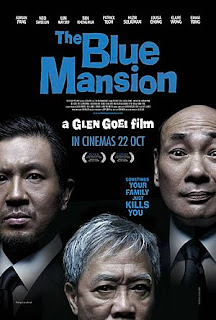 As per my previous post, I went to watch Glen Goei’s “The Blue Mansion” on Sunday after a fun-filled day at Sentosa. I saw the trailers ages ago and had wanted to watch it way before it opened. I’m a big supporter of local films (except Jack Neo…sorry, but he makes movies, not films) and I must say that “The Blue Mansion” went beyond my expectations and far delivered more than it markets itself.

The story tells of Wee Bak Chuan, a pineapple tycoon and philanthropist although his children would call him a tyrant/ dictator. He dies a sudden death and he is left in limbo figuring out whether he died of unnatural causes. His death allows him to see the fractions in his family and how little he knew and understood his family.

“The Blue Mansion” has everything – comedy, mystery and drama. It even skims the topics of forbidden love, sacrifice, guilt and when love can become overbearing.

The script was hilarious and the acting was top notch, as one would expect from the stellar veteran cast of Adrian Pang, Lim Kay Tong, Neo Swee Lin, Emma Yong and Tan Kheng Hua.

What more can I say? Just go on and watch it!!!