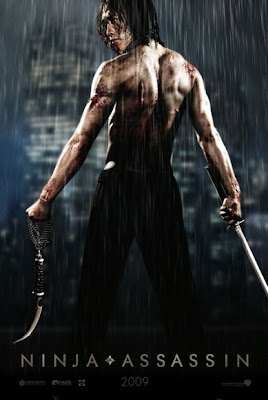 Went to watch “Ninja Assassin” with my family today and boy was it violent and gruesome. Not much of a plot nor storyline (was expecting that) but it was cool nonetheless (expected that too)!

Rain is the ninja assassin Raizo who was kidnapped as an orphan into the ninja clan, Ozunu, when young and trained to kill. He betrays the clan after seeing his loved one killed after her attempt to flee. He then makes it his mission to kill the leader of the clan and wipe them out.

The same people who brought you the “Matrix” trilogy are the ones producing this film, so there were some funky camera shots that zoomed in and out while shifting between slow-mo and normal speed during one key fighting scene. The violence is ala Quentin Tarantino where there are dismembered body parts, beheading scenes and blood spurting everywhere. But of course, there was none of that sense of comic-irony that’s signature of Tarantino.

Watch this to oogle at Rain’s fatless body (maybe I should go on a chicken & veg only diet), oooh at the cool film making, aaaah at the exciting martial arts sequences (ie. fighting scenes) and marvel at the fact that this is one Hollywood film with TONS of Asians! Wooohoo!! Not to mention, how Rain’s gonna really be huuuuuge in the international scene. 😉