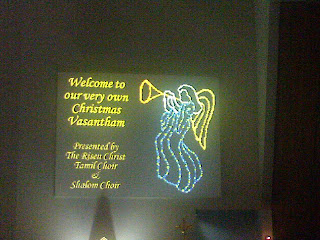 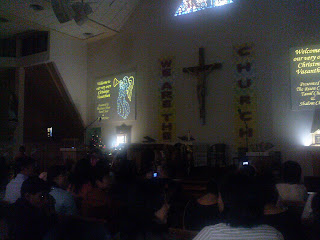 My family and I went to midnight mass on Christmas and prior to that, there usually is a Christmas pageant. This pageant isn’t like a beauty contest (despite its name) but rather a re-enactment of Christmas Day or a short skit (normally revolving around a family where someone forgets about the true meaning of Christmas). This year, this church decided to do it Bollywood style and so, it was called ‘Christmas Vasantham’. Haha….

It was really quite interesting as to how they made all the traditional Christmas carols into Indian-like tunes and there were little girls dancing in traditional Indian dances to the tunes. It was quite lively and the whole church was really into it!

After mass, the church gave each parishioner a small pack of chocolates and there even was a small lucky draw followed by a small reception. Too bad we drove away pretty soon after so as to allow other cars to drive off. 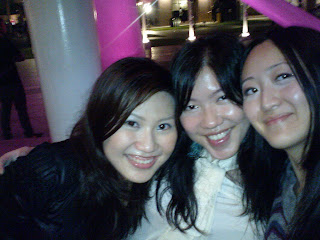 On Christmas evening, met up with Moon and Mel Li for dinner at the Esplanade followed by a night of partying at Zouk! It was my first time at Zouk and yes, I know….you’re probably thinking: What? First time? You’re kidding?!! No…I’m not kidding. I hate queues and everytime I went to Zouk previously, the queue itself was a turn off. Ah well…we ended up at Zouk at 11pm and it was empty. Seriously, not funny kind of empty. The music was fantastic though! The music transition was way way way better than that in Butter Factory.

My ears are still ringing….

I love Christmas!!!!! 😀 Rocking on…will definitely go back to Zouk another time…especially since I found out that dancing for 3 hours burns off about 1000 calories. Now, all I’ve got to do is lay off on the alcohol… 😛