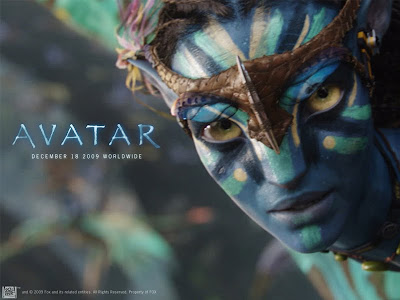 Finally…I went to watch Avatar, which is James Cameron’s HUUUUGE and widely talked about sci-fi flick. I must say that the planet of Pandora is gorgeous!!!

I’m not going to give you guys the synopsis of the film as you can read that from the website itself and from newspaper and magazine reviews. What I’m going to ‘talk’ about is whether the film deserves the hype that it got.

First off – 3D. You’ve GOT to watch this in 3D as it only makes the picturesque planet of Pandora become further alive. Take my advice and bring wet wipes to clean those oily thumb prints off the lenses (and maybe oily nose rests too). Wear contact lenses if you have them as it’ll be more comfortable. The film in 3D is not meant to have that popping effect or things flying into your face effect. It just draws you into the story…as if you’re part of it.

The movie is blatantly political and I like it! LOL. Lines such as “Pre-emptive strike” and “show of shock and awe” are nice jabs at Mr. Dubya Bush 😉 I find it such sweet irony that it takes a Western folk to write a film about how the West just comes, take over and rape the land off the indigenous people. Two thumbs up for 3D and political message!

Ok…plot wise…it still follows the prototypical Hollywood film: boy thinks he’s ‘better’, infiltrates ‘primitive’ tribe, falls in love with the chief’s daughter…then fights FOR the tribe. All ends well. Tribe is together and happy…boy remains behind with girl. Nevertheless, we all are suckered into loving these types of stories and I’m no different 🙂 I’d love to be one of these blue aliens and fly on those dragon-like beasts. Way cool man!!

Should you go and watch it? Of course! And watch it in 3D please!!