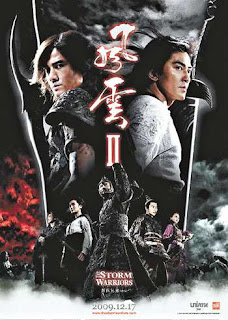 Hey peeps! As promised, I’m dedicating a full post on the movie “Storm Warriors”, which I watched last Sat night with Siew Mai and Mel Li.

This sequel to “Storm Riders” tells of how Wind (E-Kin Cheng) goes into the dark side in an attempt to overthrow the Lord Godless (Simon Yam) who is trying to take over China. It also shows how Cloud (Aaron Kwok) tries to bring Wind back from the evil side. While Wind learns the evil kung fu, Cloud learns new sword techniques from Nameless and creates a new sword style.

Now, this is where the laugh-out-loud moment occurs. Cloud asks Nameless to give the new sword technique a name and Nameless dramatically carves a word into the wall of the mountain. Nobody recognised the word and when Cloud asked Nameless politely what the word was, the whole cinema sniggered and laughed. Then Nameless replied that it is a newly created word that is “是云而非云，是剑而非剑” (translated to mean: it is cloud but not cloud, it is sword but not sword). Hahaha…I like how he’s able to carve out a word using only his sword and qi. That line is also very unique la! The word is a hybrid of cloud and sword. So unique. Oh…and it is to be read as ‘ba’.

The whole cinematography of the movie was obviously inspired by “300” in the slightly comic-style, slow-mo and slightly pop art. The music was MORE dramatic than 300 though. There were several scenes where the actor will glance, then dramatic pause. Those pauses would cue super drama music that harbours between operatic and noise. What’s with the stupid dragon thingy that’s so important and ‘holds the secret to China’?? It seems to have some mysterious power to calm Wind down from his demonic state. However, I nearly burst out laughing when Lord Godless picked up the bones and let out his evil victorious laugh while raising the bones up. I couldn’t help but turn to Mel Li and said, “BUT IT’S JUST A FREAKING SPINAL CORD!!”

My advice is this: watch this movie only for the cool special effects and to oggle at Rambo-like Aaron Kwok, uber cool E-kin Cheng (how does he manage to look so hot at 40?), very bad-boy cool Nicholas Tse and for those laugh-out-loud corny lines. Duds were the 2 females in the movie. The one acting as Chu Chu was really a vase to add some romance and awww moment (yep…no plural). What’s-her-face acting as Second Dream (err….is there a First Dream or Nightmare?) was bordering on whiny. The females only seem have these few lines: Brother Cloud/ Brother Wind/ Has Brother Wind become a monster?/ Stop fighting! Ok…maybe Second Dream had 2 more lines than that. Not bad being paid so much for such few lines and scenes. I also want. 😛 HAhahaha….