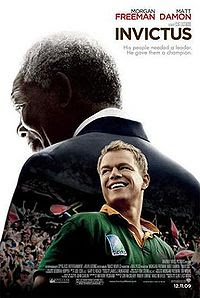 When I first saw this movie poster, I couldn’t believe that it was Matt Damon….they managed to photoshop him until he doesn’t look like himself.

“Invictus” tells the story of the newly elected President Nelson Mandela who uses rugby to unite the whole of South Africa. Of course, he couldn’t do it without the help of then South African rugby captain Francois Pienaar.

Don’t we all love feel-good movies, especially those that tackle (no pun intended) racial discrimination? I like the part where Mandela talks about how the blacks have to forgive the whites in order to truly move on from the apartheid. It is easy for humans to give in to petty revenge, but true building or re-building of a nation requires everyone to forgive and move on.

The story is rather simple. South Africa was never deemed to be a good rugby team and was losing match after match. To add, the blacks in South Africa were cheering for foreign teams as the Springboks were a symbol of the whites and apartheid to them. However, South Africa was to host the World Cup in 1995 and Mandela forsaw that the sport would be a chance to unite the whole country. He too said that it was wrong to remove the Springboks as taking away what the whites cherish would only turn the whites’ fears into reality, which will only pit the whites further against the blacks.

As history would have it, South Africa eventually won the 1995 World Cup against New Zealand’s All Blacks.

Out of the night that covers me,
Black as the pit from pole to pole,
I thank whatever gods may be
For my unconquerable soul.

In the fell clutch of circumstance
I have not winced nor cried aloud.
Under the bludgeonings of chance
My head is bloody, but unbowed.

Beyond this place of wrath and tears
Looms but the Horror of the shade,
And yet the menace of the years
Finds and shall find me unafraid.

It matters not how strait the gate,
How charged with punishments the scroll,
I am the master of my fate:
I am the captain of my soul.