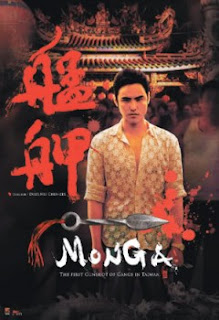 Monga (艋舺), directed by Doze Niu Chen-zer (鈕承澤), is a classic gangster tale. The scene is set when Mosquito, played by Mark Chao (趙又廷), a new boy in the high school finds himself being picked on. His brave response catches the attention of Dragon, played by Rhydian Vaughan (鳳小岳), who is the son of Geta, the boss of the Temple Front. He is inducted into the gang and forms part of the group of five that also includes Monk, played by Ethan Juan (阮經天). Monkey and Dog Boy complete the line up.

The film then centres itself on the relationship between these five lads and how their bonds are tested with gangster politics coming to play.

I must say that I was hyped to watch this movie after reading the rave reviews in the newspapers and I wasn’t disappointed. All the actors were so convincing as Hokkein-spewing vulgar gangsters that I really have to take my hats off to ALL the male leads. Ethan Juan looks good with his shaven head, Mark Chao is so adorable and Rhydian Vaughan is just hot. Girls will love this movie for all the eye candy while guys will enjoy the fight scenes, the brother-brother camaraderie.

Speaking of fight scenes, they were well shot and choreographed. Highly unlike all those pseudo-fights in Taiwanese idol dramas. The blood and gore were so convincing that I gasped out loud at times, much to the amusement (irritation?) of my neighbour.

It has been a long time since I’ve heard ‘good’ Hokkein vulgarities on screen although I kept hearing them pronounce “Monga” like “Mang-ga” which means mosquito bite in Hokkein. LOL. Must be my hearing.

So, two thumbs up for this film!! I think you’d enjoy it even if you don’t understand Hokkein/ Mandarin although understanding these 2 languages would certainly add depth to understanding the film. Good job Doze!!