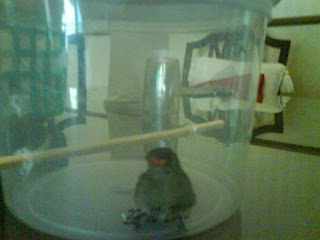 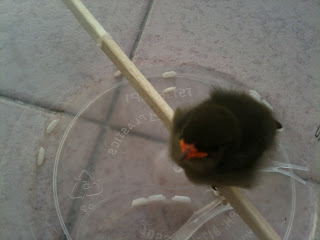 A small tiny wee green bird flew into my flat on Thu afternoon and didn’t know how to fly out. So, seeing how ‘rare’ this bird is in my neighbourhood, my mum cleverly put it in a makeshift ‘cage’ so that I could see it when I came home. It really is quite small and cute…until this morning.

The stupid bird doesn’t sing or screech. It’s chirp sounds like an alarm clock that doesn’t stop beeping. Irritating bugger woke me up at 6.30am with its stupid incessant beeping (not chirping). It shut up when I walked to it. I opened the top of the ‘cage’ and left it on my balcony floor, thinking that it’ll be smart enough to sense that it is no longer trapped and fly away.

Finally, I shook the ‘cage’ towards the air and it FINALLY flew out. Stupid bird. No wonder there’s the term “Bird Brain”.