It’s the new year and as I woke up only at 1pm on New Year’s Day, the parents and I decided to have lunch at Anchorpoint. There was a new sushi bar, Sushi Odayama (if I remember the name correctly), that we were hoping would open on the New Year and lo and behold…they decided to do their soft opening on 01.01.2012!! 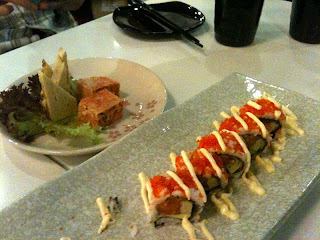 Above is their California Roll, which is very reasonably priced at $6.80 for 8 pieces.  The layer of rice is very thin and it’s chock-full of avocado and salmon!  The owner also recommended the Tamago yaki (currently named as ‘egg plate’ on their temp menu…my feedback to the owner was to change it to Tamago yaki) which is topped with their secret powder.  I’m guessing that their powder is a slightly variation from the traditional pink floss-like sugar. 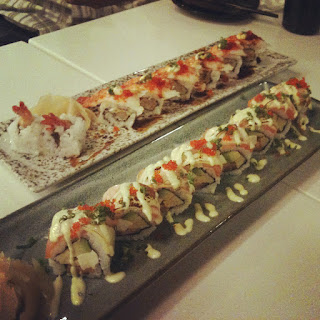 We also tried their Double Ebi roll (top, priced at $13.80) and their Grilled Salmon Cheese roll (bottom, priced at $12.80).  The Double ebi roll was quite a delight as the prawn inside is actually tempura prawn while the top is simply boiled prawn.  The texture of the crispy tempura crust goes nicely with the unadulterated boiled prawn on the top.

As for the Grilled Salmon Cheese roll, everything was good except for the wasabi mayo that was drizzled on the top.  As you know, I detest wasabi.  Yes, I can taste it although it was very much diluted in the mayo.  Still makes me gag. Sorry…you wasabi lovers can go to your own corner. 😛

Anyway, back to the food.  The owners are a young couple from China but recently got their PR status here in Singapore.  The chefs are also from China but have many years of experience working in Japanese restaurants back in their native Shanghai.  All in all, the food’s quite good but as today was only their first day, there is a lot of tweaking to be done!  We were quite forgiving as such and do support them as I do want this stall to stay in Anchorpoint!  Hee hee… 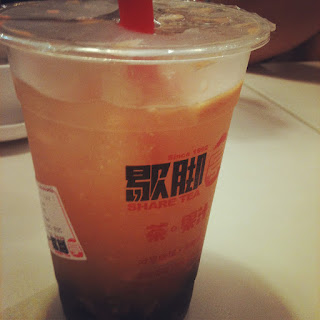 For dessert, I opted for a bubble tea from yet another new store in Anchorpoint.  It’s Share Tea and it is also from Taiwan, joining the ranks of Gong Cha and Koi.  Taste test – yum!  Above is my grapefruit green tea with pearls and aloe vera at $3.60 (extra charge for the aloe vera).  I was expecting grapefruit essence/ extract but was pleasantly surprised with fresh grapefruit juice and grapefruit pulp! Really refreshing and made me feel like I was really eating healthily, especially after my sushi lunch (I know, I can lie to myself).  I’ve tried their QQ Family Tea before (milk tea with lychee nata de coco, jelly and pearls) and it was like a tea party in the mouth.  Ok…am soo going back for more. 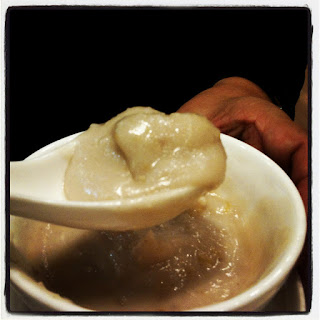 The parents went for the more traditional desserts of Ou-ni (yam paste with gingko nuts) and peanut paste. 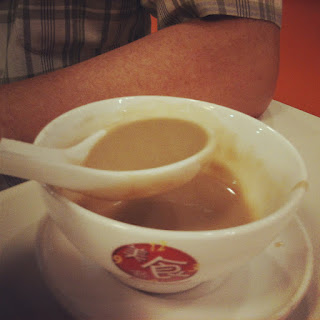 All these food stalls can be found at the basement of Anchorpoint, 370 Alexandra Road, just opposite IKEA and next to Queensway Shopping Centre.