Movie Review – The Woman In Black 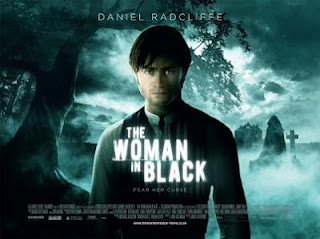 I won a couple of tickets to watch “The Woman In Black” so Mel Li and I headed off to watch it together.  No way was I going to watch a horror flick all by myself.

Based on the book by Susan Hill, “The Woman In Black” is a supernatural horror-thriller film starring Daniel Radcliffe.  Radcliffe stars as a young solicitor, Arthur Kipps, who goes to Eel Marsh House to handle the estate of Alice Drablow.  When he arrives in the village, he was not welcomed and was constantly encouraged to return to London as soon as possible.

At Eel Marsh House, Kipps sees a woman in black and soon, other strange things happen as he unravels the reason behind all the strange deaths of the village children.  Through this all, Kipps is constantly thinking about his wife who died 4 years ago during childbirth as well as his 4 year old son.

It was quite interesting for the director to cast Radcliffe as Kipps because of Radcliffe’s young age (he’s only 22!).  Needless to say, Radcliffe really tried to show his acting chops by emoting his grief over his wife while trying to convince the audience that he’s grown up enough to be a father.  Did he succeed?  To a certain extent but it doesn’t help that the other actors are a lot older than him and they too have young children in the movie.  Nonetheless, kudos to Radcliffe as this movie really helped him shed the Harry Potter image.

The movie proves to be scary and they did go along with the usual method of using creepy music and some shock tactics.  That said, the movie achieved its goal of scaring you but at least having some depth to it.  The ending was really bittersweet and it sorta lingers in your head even after the movie ends.  Verdict? 1 thumb up and try not to watch this while holding onto a drink/ popcorn…you do not want a shower of soft drink or popcorn confetti.