Recovering Well & Nails For The Day?

I just removed my stitches yesterday so I feel a lot more comfortable now! 🙂  I now have 2 small crosses (scars) and a line…haha…’battle wounds’.  Anyway, thing is that endometriosis is a long term condition so I am currently on a treatment where I get a series of injections that block my oestrogen so that I go into a semi-menopausal state to prevent this endometriosis from recurring.  Well, I’ll have to stop it when I want to get preggers.  Such joy, isn’t it?  You can read an article written by my gynae here regarding this condition.

Anyway, to celebrate my removal of stitches as well as finally solving my whole really bad period problem, I decided to put on the fake nails ($3.50) which I bought some time ago. 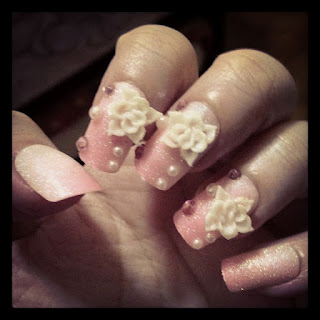 Looks a little chin chiong, I know, but I found it rather sweet.  However, if you follow me on twitter, you’ll know that the caption read “Nails for the Day?”  I normally change my nail design once a week.  In this case, the stupid pack only had ONE nail per size.  How silly is that??  I couldn’t deck out all my nails in the end because there wasn’t any nail small enough for my right index finger!  Ok…this is the follow up to my tweet.  The nails didn’t even last an hour.  The left pinky dropped out after an hour.  Then when I went to bed, the left fourth nail came out.  When I woke up this morning at 10am, all the white flowers had dropped out.  After my shower, the left thumb dropped off.  Pathetic glue and bits.  The next time I decide to go cheapo, it had better be from Daiso.  As I’m typing this, only the right third and fourth nails are still attached.  I’m going to take them off soon.  😛

So…instead of being a fun girly nail affair, it turned into a teeth-baring “I-wanna-rip-you-guys-off” moment with said nails.  Sigh.  Shall celebrate in other ways.  Korean BBQ anyone?

Previous postOn the road to recovery Next postRandom Fashion Musings