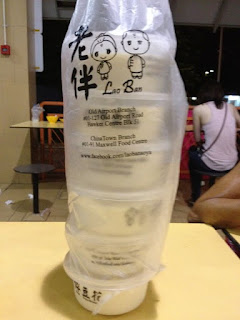 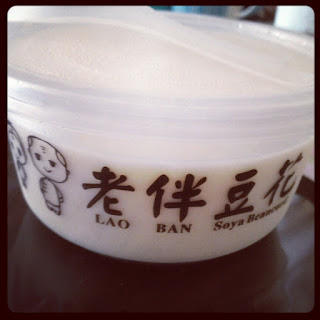 Finally managed to get my hands on the one and only LAO BAN SOYA BEANCURD!!  This store is the one that started the whole craze for silky, creamy and smooth soya beancurd that you can slurp with a straw.  The fact that it wobbles in the bowl is enough to make you imagine how soft and silky it is.

Thank you Gor Gor!!  My elder bro and his friends were having dinner at Old Airport Road Hawker Centre and one of them was willing to queue for half an hour in the heat for these babies.  😀

Now, I’ve also eaten the one at Old Army Market and people have told me that it’s comparable to Lao Ban.  So…I’ve been very curious as to how the original Lao Ban one tastes like.  Unfortunately, I couldn’t eat it on Saturday night, which was when my bro bought it, as he came home at 11pm.  Thus, the beancurd became my breakfast on Sunday morning.

First thing I notice was the skin forming at the top and the cracks that started appearing thanks to me moving the bowl around.  The thickness of the skin was probably due to the fact that it had been unrefrigerated for a couple of hours before finding refuge in my fridge.  Otherwise, the taste is almost the same as the one at Old Army Market!!  It’s that same silky, smooth, Horlicky taste!!

I’m not a fan of queues so…I’ll go to whichever is cheaper and has a shorter queue, which is the one at Old Army Market.  😛

If you haven’t tried either, WHAT ARE YOU WAITING FOR????  Just go to any of the Lao Ban branches and Beanz at Old Army Market!!