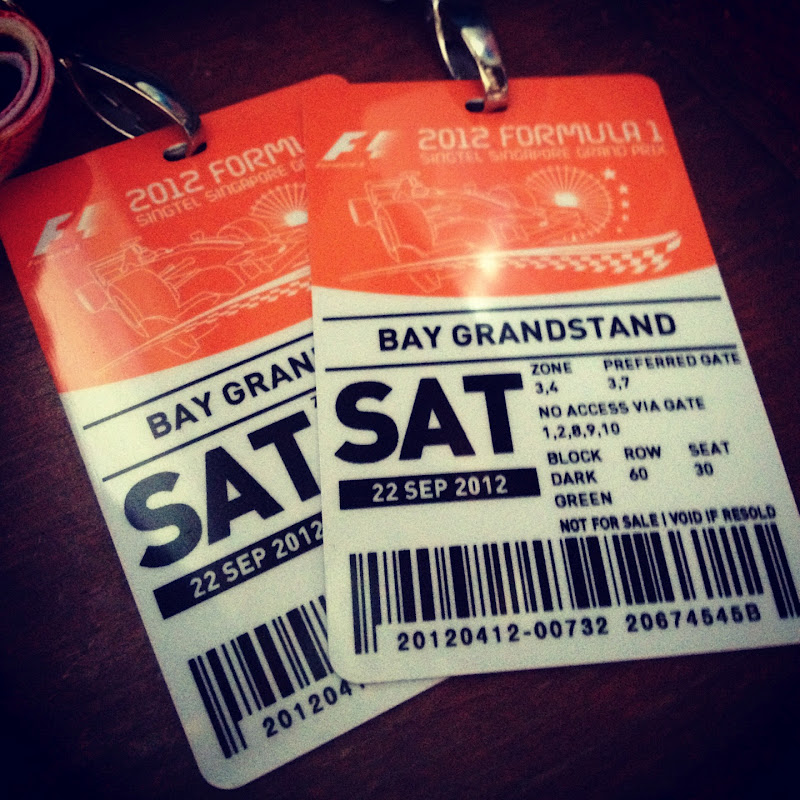 I’ve always avoided F1 because it’s crowded, noisy and I simply don’t really bother much about racing.  I’d rather be the one racing than watch cars do laps in front of me while I wear ear plugs.  Anyway, I decided to go to this year’s F1 race simply because I wanted to watch Maroon 5 perform. 🙂 Thanks to my friend, who is a marshal, I managed to score a pair of tickets to Sat’s race/ performances! Thank you H!! 🙂 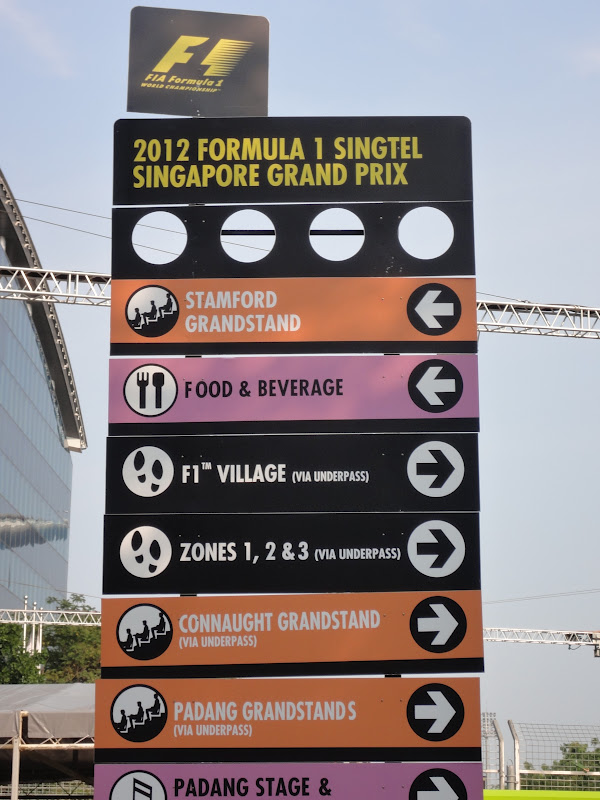 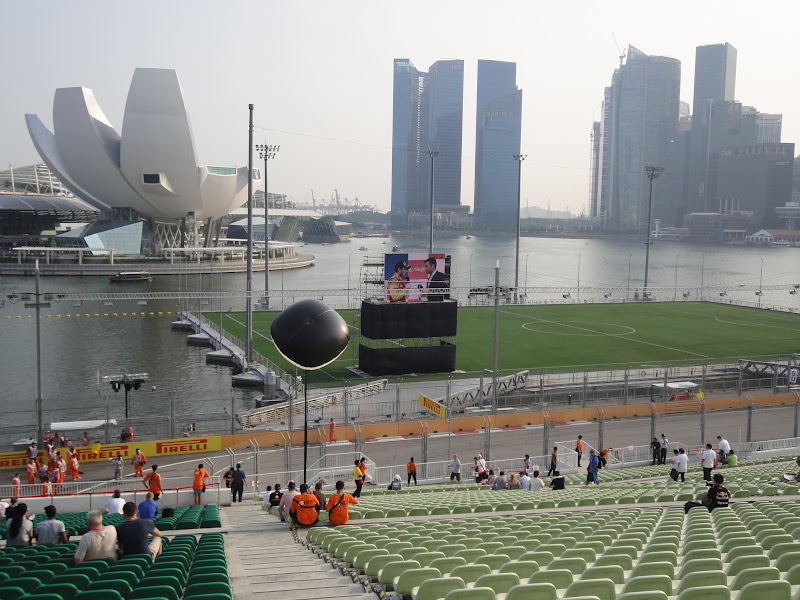 The view from the Bay Grandstand…also known as The Float @ Marina.  My first time on this floating stage so I just had to sit there and soak in the view. 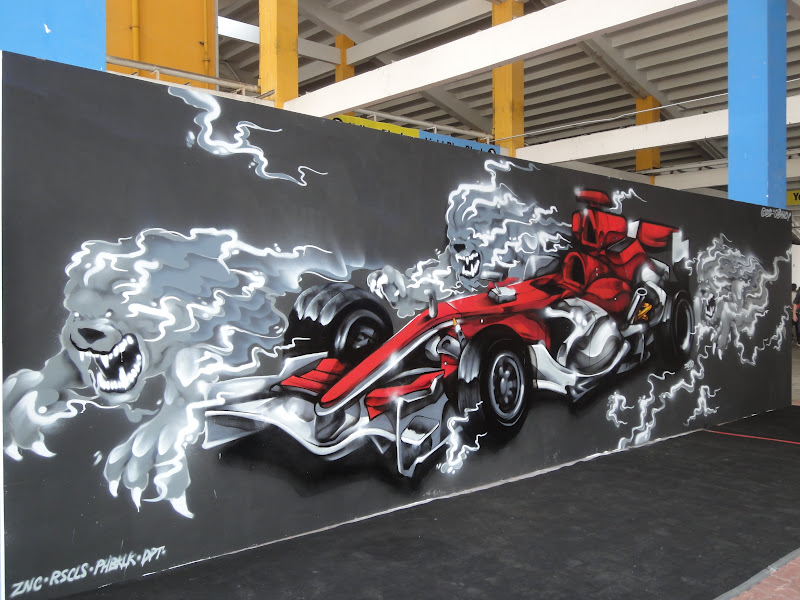 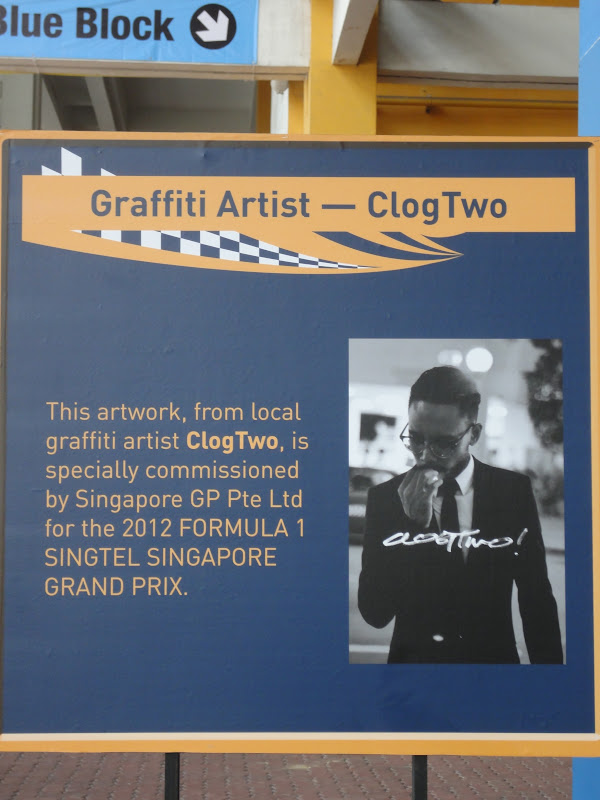 Great graffiti art at the Bay Grandstand! I wasn’t expecting this but I really like the carnivalesque flavour of the whole afternoon/ evening so far. 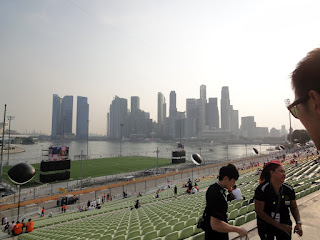 View from the Bay Grandstand aka The Float @ Marina. This is my first time here so I decided to sit and just soak in the view before the race began. 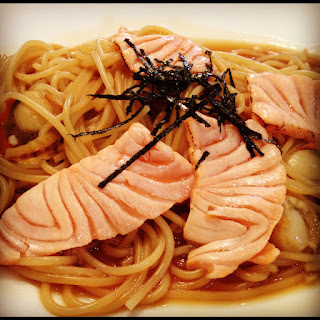 We went to MOF at Marina Square for dinner and I thought I’d try their Japanese Pasta so the above is Salmon and baby scallop spaghetti in a teriyaki based sauce.  Verdict – don’t bother.  Go to Yomenya Goemon or Pasta de Waraku for better Japanese-style spaghetti and at almost the same price of $15.90.  What a rip off. 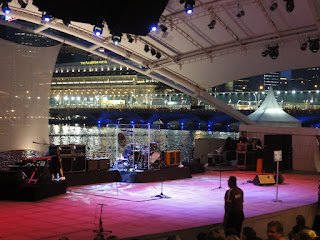 After dinner, we headed to the Esplanade Outdoor theatre and people were already seated at 7pm, waiting for The Pretenders to perform at 8pm!!  Instead of waiting, bro and I decided to just walk around the track and see what other sort of entertainment there was. 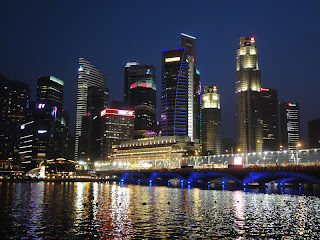 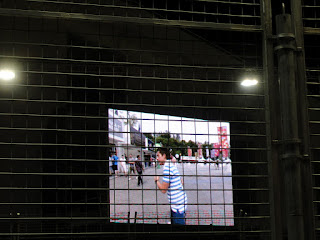 There were several large screens dotted around the track and during this period, we caught a clip of Max Loong checking out the various F1 merchandise. 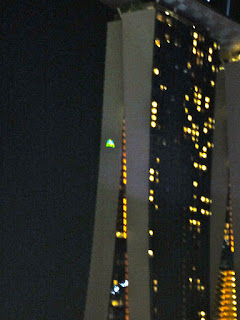 You probably can’t see it too clearly in this photo but I thought that it was rather cute that there were laser light ‘shows’ of F1 cars driving up the Marina Bay Sands.  Bro thought it was tacky.  Ah well. 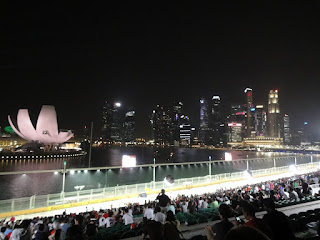 The glorious track all lit up! Everyone was starting to go to their seats and watch the drivers go through their qualifying rounds. 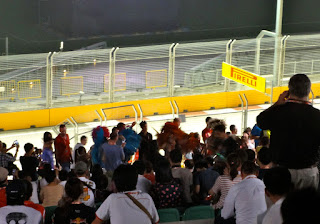 While waiting, Samba girls were there to entertain the crowd as they danced and roved around. 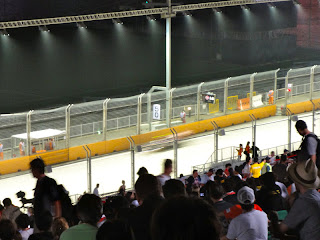 Vrroooom……After 15 minutes, I was bored to tears but Gor was sleeping thanks to his jet lag so we didn’t move off till about 9.45pm so that we could start getting a good spot in the Padang stage area. 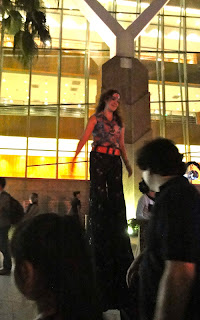 On our way, we met dancing hippies on stilts.  There were 2 of these dancers and a DJ too.  It was quite cute. 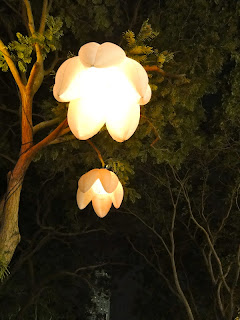 Love the gorgeous flower lights that hung on the trees lighting one’s way to the Padang entertainment and food area.  Really apt since we are approaching the Mid-Autumn festival.  Nope, there were not any stalls selling mooncakes.  They only had a lot of burgers, hot wings and alcohol. 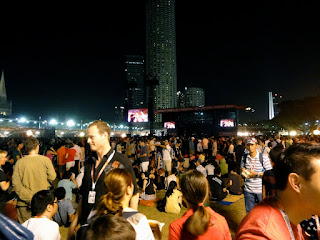 Check out the crowd!! Mind you, this is only HALF of the Padang area and soon, we’ll be skipping and hopping our way further front 😉  THIS is what I really came for… 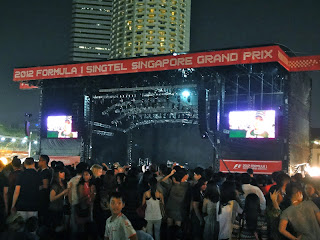 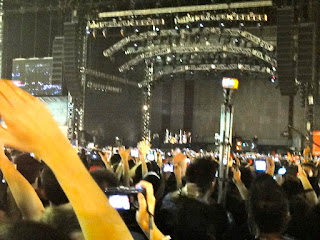 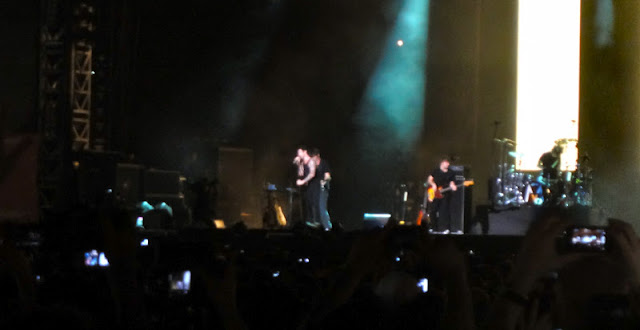 Awww…he’s so cute and he can really sing! He definitely moves better than Jagger and man…what an entertainer!!! 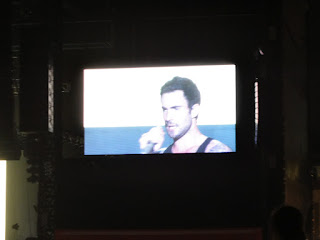 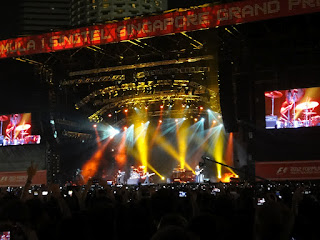 The energy from the crowd was great and everyone sang along to all the songs which I think really pleased the guys as Adam kept smiling. 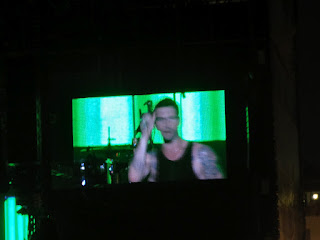 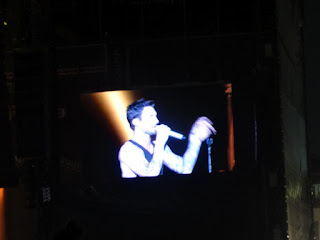 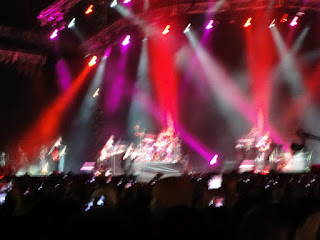 Maroon 5…please come back to Singapore for a full length 3 hour concert!! I will definitely buy a ticket and scream my heart out while singing along.  😀 More concerts please!!!

Now that I’ve seen the actual cars doing their rounds, I think from next year onwards, I’ll go to F1 just for the concerts.  Haha…and only if I have free tix! Ladidadida