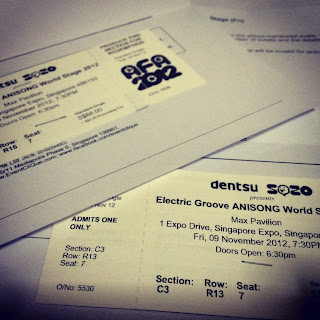 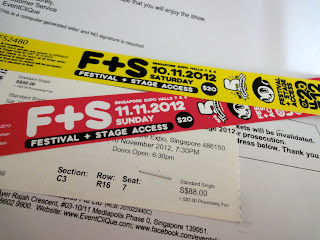 Got my concert tix to T.M.Revolution on Fri, 9 Nov and then 5 artistes on Sat, 10 Nov.  The 5 artistes for yesterday’s concert were: BabyMetal, Fripside, m.o.v.e., LiSA and FLOW.  I was mainly there for LiSA and FLOW. 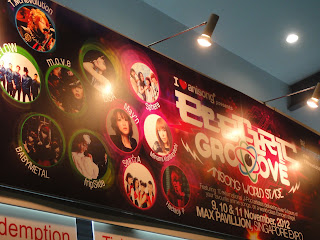 There were other artistes performing today (May’n, Sea.A and some others) but they were those whom I wasn’t interested in.

Sorry folks but I didn’t take any photos of the T.M.Revolution. I was being a good girl.   🙂  Having said that, T.M.Revolution proved to us what a rock star he is with his outstanding and entertaining performance, which was backed by his equally great band! Below is post-T.M.R with Siew Mai pouting over the fact that it is over. 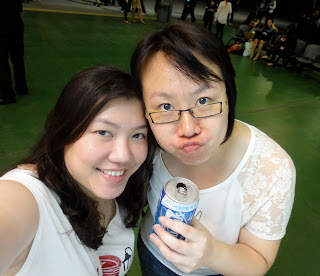 Onto Saturday’s Festival and Stage area! They were giving out these fans at the entrance as well as at Amuse Inc’s booth.  Rurouni Kenshin!! I’m so excited that the movie is coming out! I was reminiscing with a friend that we started watch the Kenshin anime when we were in JC.  It has been THAT long. 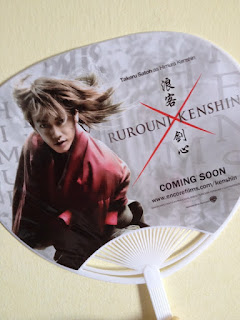 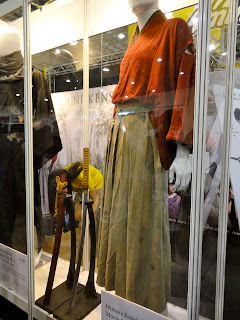 The costumes worn were on display!! Weeee~~~ 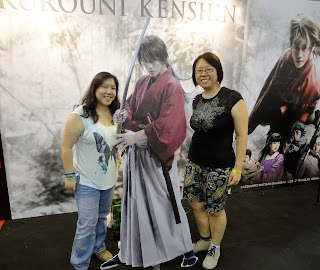 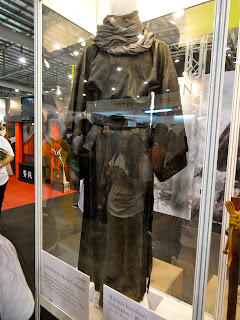 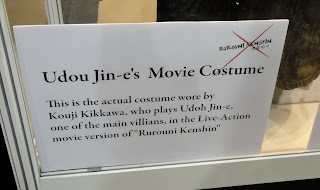 I saw the above costume and I was really tempted to get it but then…it’s meant for males and I wouldn’t have any chance to wear it except during the annual AFA.  The price wasn’t very cheap either. 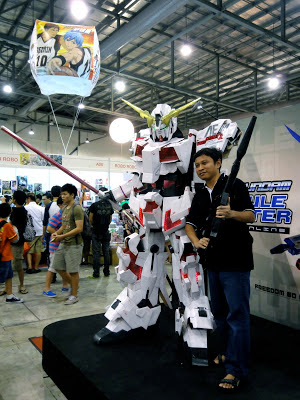 I really have to give it up to this Gundam cosplayer.  You can’t really see from this photo but the whole costume was made of cardboard.  Amazing.  However, I couldn’t help but think: how does he go to pee? 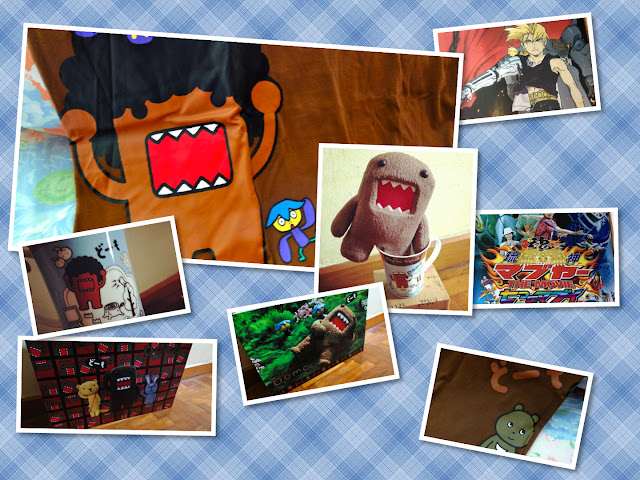 My stash from Odex booth! I know…a lot of Domo-kun stuff.  Siew Mai and I love Domo-kun so we shared the cost of the Fukubokuro and my T-shirt. $29 for T-shirt & Fukubokuro which contains 1 pen/pencil, 1 mobile phone holder, 1 mobile phone strap, 1 mug, 1 other mobile phone thingy, 3 L- folders and 1 mystery item.  Add $5 for a domo-kun cushion.  The T-shirt alone costs $12.  With these purchases, we received a free hologram poster of “Mobile Suit Gundam – Trailblazer”, a free “Ryu Mabuya” poster and a choice between “Full Metal Alchemist” poster or some other poster. 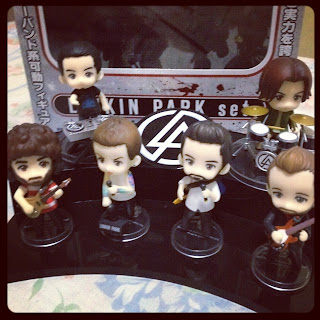 We went to the Stage area at 5pm only for me to realise that I had missed the 4.30pm Greeting Session by LiSA. Doh! LiSA is such a great live performer who is very energetic and entertaining.  I kinda regret not getting her CD last year as this year, the only LiSA merchandise being sold was a pair of earrings at $13.  (0_o)  Nutso.  I’m not going to buy a pair of rubber earrings for $13.

Nonetheless, it was the screening of the 1st half of ‘Eureka Ao 7’ after the greeting session and it seems rather interesting.  Plus point is that the opening theme song “Bravelue” is sung by FLOW who made a ‘surprise’ appearance. 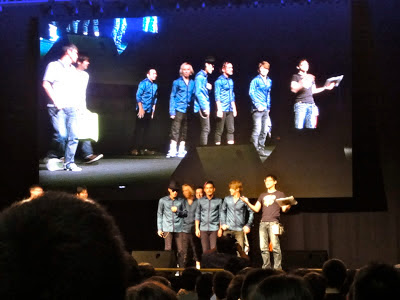 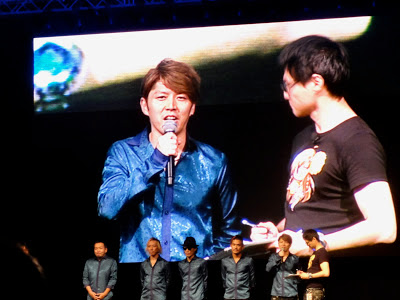 After a quick dinner, we headed off to the Max Pavilion where the concert was held at.  The ticket stated that the concert would start at 7.30pm so I didn’t really understand why the organisers only announced on their FB page that it would start at 7pm to ensure that people are able to catch the last train home.  Um…I love social media and all that but when we’re at the Festival, it’s not a habit of ours to check FB all the time.  Couldn’t there be announcements made over the PA system?  In the end, the concert started at 8pm due to technical issues.  As a events organiser, I can’t really blame them for the technical faults as shit always happens even after testing like a gazillion times.

The concert opened with BabyMetal who really annoyed me with their helium-induced-like voices and the jarring mix of rock, pop and goth. Square peg, round hole. You get it.  The otakus in the crowd loved them though.  That said, Siew Mai and I were among a large group of sitters.

After BabyMetal was m.o.v.e. who managed to rally the crowd into a rave despite the really really long wait in between.  That’s possibly because their music is the trance/ euro-beat genre which I felt was more suited to a club.

m.o.v.e. was followed by fripSide where they had mic issues and the lead singer’s voice couldn’t be heard properly.  Didn’t help that her voice is so high and weak while the music was so loud.  Perhaps they should’ve tuned down the music.  The poor girl had a frozen smile but I guess it didn’t matter in the end as the crowd loved them.  Siew Mai and I were back on our chairs during their set.  Sorry…not our cups of tea.  I was very impressed and entertained by the side entertainment of some otaku boys who synchronised their dance during FripSide’s set.  Below is the video clip that I managed to take.

Finally…after a super long wait due to equipment change and technical issues…LiSA!!!! 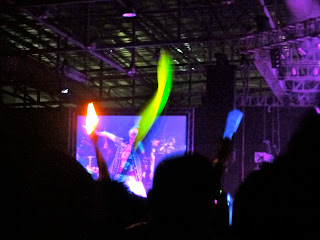 LiSA again wowed the crowd with her superb vocals and entertaining performance! She teased and interacted with the audience while we were also taught a hand gesture/dance along with her.  Her rendition of 「一番の宝物」is as great as ever and she nearly turned emo again but I guess the lack of time caused her to go to her next song really quickly and she didn’t get the chance to cry.  I was so disappointed that she only sang 4-5 songs with NO encore!! WTH!! もう一曲聞きたいな〜〜〜

Again, with another long equipment change etc, FLOW came on with the Superman theme song as their entrance background song.  Cheeky boys. 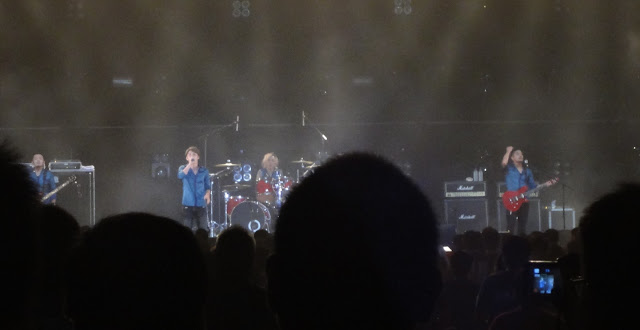 I can’t repeat enough times how great FLOW is during their live performances.  They only sang 4 songs!!! Again, NO ENCORE! The crowd was pumped up and continued singing along to ‘Go!!’ although it was played only as a background song.  You could tell that the band didn’t want to leave as they were still on stage waving to the audience despite having all the house lights on.  They were also apologising to us fans via twitter on how it was too short and they promise to come back to Singapore again.  Yes please and don’t make us wait a whole year! These guys ought to do a FULL concert on their own. Fark AFA.  I know I’ll be happy 🙂

I can’t fault the organisers for the technical issues but I think that they should’ve added in more buffer time for it.  Not to forget that it was streaming live on Nico too…which made me wonder whether the long in between waits was also due to advertisements on Nico?  I also think that having 5 artistes perform within 3 or 4 hours is overly ambitious.  That doesn’t allow time for encores nor as I had mentioned earlier, buffer time.  One has to know your audience too…the older ones couldn’t care less for Babymetal or fripSide…so perhaps an afternoon concert with these 2 could’ve been held?  After all, the Max Pavilion was already rented for the whole day…should maximise time and ticket sales.  The staff/ volunteers ought to be taught to be a bit more polite too.  Nobody should say to guests “The Hall is about to close. Please leave.” PR skills sorely lacking.  The right thing to say ought to be, “Sorry but you’ll have to leave soon as the Hall is closing.”

After we left the hall, I couldn’t help but feel super disappointed and it didn’t end on a high for me.  It was like I was starving and someone gave me a starter, only to take it back after I had a bite.  Really upsetting.  🙁  I really hope that this doesn’t happen next year.  Seriously.