As you know, I went to AFA (Anime Festival Asia) over the weekend so a girl has got to eat right? So…Siew Mai did a bit of googling and found ‘Heath Bistro’ at Expo via hungrygowhere.com. 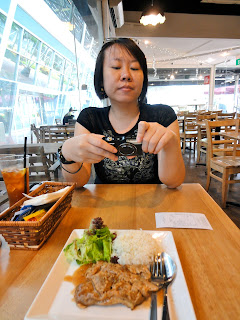 That’s Siew Mai pretending to take a photo of my food.  Below is my Chicken Chop Rice which came with a small side of salad with balsamic vinaigrette.  Verdict – so-so. Nothing really special. 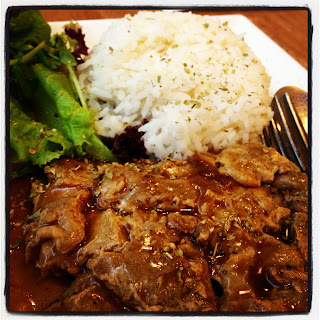 Siew Mai ordered the Pizza Margherita and added $1 for chicken toppings.  I didn’t try it but she said that it was good.  Thin crust pizzas rule! 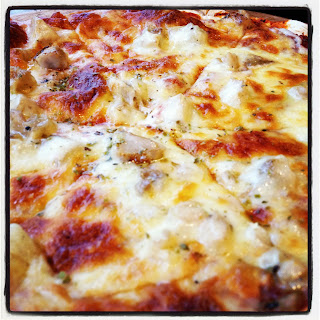 Both were part of their sets which cost $9.90 and came along with a soup.  I didn’t take any photos of the soup because it looked grey.  It was mushroom soup and I liked that the mushroom soup wasn’t creamy and still had obvious mushroom bits.  Didn’t like that it tasted like seawater. Salty.

The service was a bit lacking and they only had 2 wait staff.  1 auntie was just doing the serving and clearing while the younger girl had to do that as well as take orders.  Hmm…not a good idea on a Saturday with 4 exhibitions going on simultaneously.  No wonder the place wasn’t crowded.

I don’t think I’ll go back there again unless I want to beat the crowds.  That said, the lure of $9.90 set meals is quite strong if I’m at Expo since I’ll only go there when there’s a major exhibition.