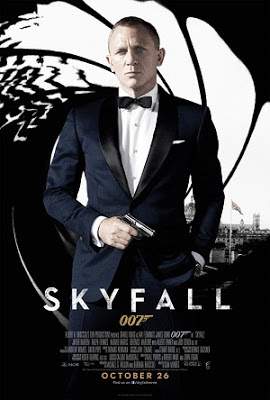 “Skyfall” is the 23rd James Bond movie and it also marks the 50th anniversary of Bond.  In the film Bond investigates an attack on MI6; it transpires that it is part of an attack on M by former MI6 operative, Raoul Silva. The film sees the return of two recurring characters after an absence of two films: Q, played by Ben Whishaw, and Miss Moneypenny, played by Naomie Harris. Skyfall was the last film of the series for Judi Dench who played M; a role which she had played in the previous six films. The position is subsequently filled by Ralph Fiennes‘ character, Gareth Mallory.

Overall, it is a very good Bond movie and it certainly pays tribute to old school spy thrillers where the storyline is simple and just a lot of action.  There were some side jokes in reference to gadgets that had appeared in previous Bond films which were quite funny if you got them.  The most outstanding actor in this film has to be Javier Bardem.  His acting was SUPERB and he brought in that flair to the character of the villain whom you love to hate but secretly want to be simply because he’s quite a genius (albeit a crazy bloodthirsty one).

Women (and feminists in particular) will prefer this Bond film to the rest because the usual sexy Bond girl(s) here are sidelined and hardly play any role in the movie, with exception to Moneypenny but then she doesn’t sleep with Bond.

So, what are you doing reading this review? Just go watch it and enjoy it as an entertaining action flick that will not disappoint.