My brother ate the fried chicken at Bonchon Chicken in New York and was telling me how much he enjoyed it as well as how popular it is in NYC. As such, I decided to try the Bonchon Chicken at Bugis+ for lunch. Started with the spicy Tteokbokki ($12.90++) which not only was the rice cake but also noodles which tasted suspiciously like spaghetti. SPICY!!! I’d rather they gave more rice cake than the noodles. 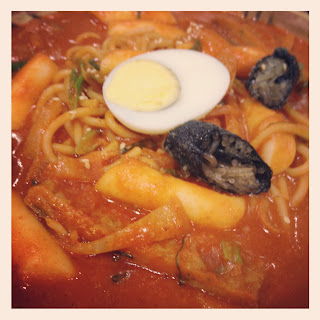 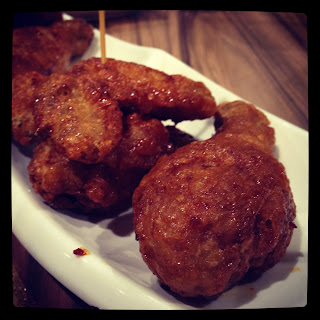 The star was of course the fried chicken.  My colleague and I ordered the Medium Combo ($15.90++) which had 2 drumsticks and 6 wings (I’d argue and say that it’s 3 wings since they counted the drumlet as a wing), and you can choose a side (rice/ edamame/ kimchi).  As for the sauce, half of the plate was spicy while the other half was garlic soy.  Trouble was that the tteokbokki was so spicy that the sauce on the chicken didn’t really stand out to me.  I love the crispy and not oily skin.   However, the meat tasted a bit weird although it was tender.  It wasn’t juicy and lacked that yummy chicken taste…if you get what I mean.  As such, the more flavourful chicken part has to be the wing but I’m a drumstick gal.  They claim that the sauce is designed to stay on the skin and not on your hand.  Verdict on that? 95% true.  There’s a reason why there are packets of wet towels on the table.

I would go back again but if I’ve got a craving for the sauce but if I wanted to eat fried chicken, I’ll be heading off to KFC/ Texas Chicken/ Popeye’s.  Sorry Bonchon.