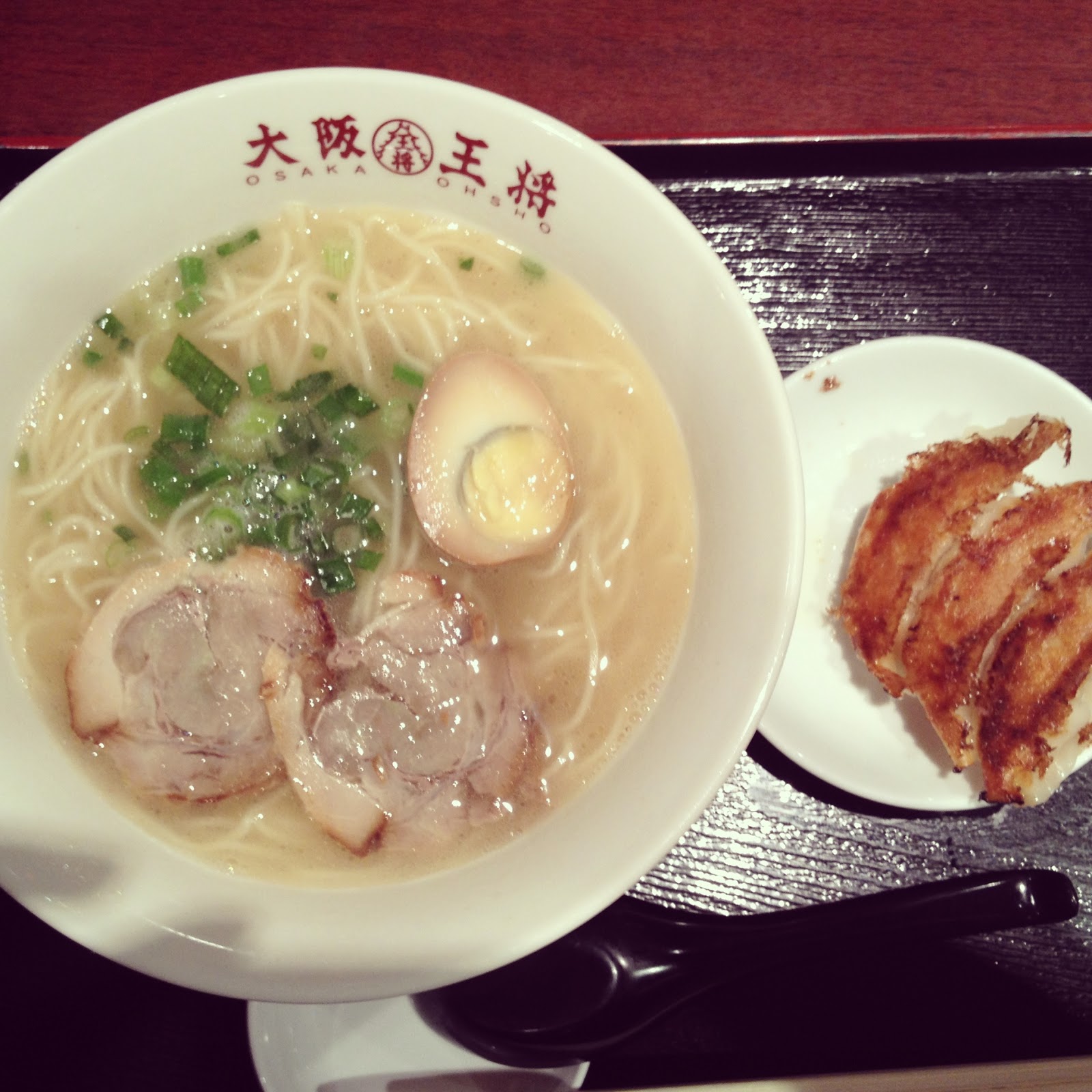 So…Japan Foods Holdings decided to revamp the Champon restaurant at Raffles City Tower basement to “Osaka Ohsho” – the king of gyoza.  Good strategy because it keeps people interested in the place while the parent company brings in yet another ‘heavyweight’ from Japan. Decided to try the place out since gyoza is supposed to be their specialty.

Ordered their smaller ramen lunch set ($9.90++) which has 3 pieces of gyoza, a bowl of ramen and a choice of hot or cold houcha (tea).  I honestly don’t get some of their lunch sets because they’re exactly the same price as stated in their ‘normal’ menu…so what makes them so special?

Don’t be fooled by the plastic gyoza on display.  The real thing is about 3/4 the size of those plastic models.  But of course, the taste of them gyoza isn’t plastic.  I liked that the gyoza was not fried in tons of oil so it wasn’t oily but yet the crispy side was crispy without being dry.  Because of the lack of oil, these morsels of pork dumplings do tend to stick to each other but who cares when you’ve got a spoon to use as leverage and the whole plate is yours.  Haha!  What I found slightly weird was that the vinegar had soya sauce added and wasn’t sour enough.  I like my vinegar sour and pure, thank you very much.

The ramen is quite ok too but it reminded me of the instant ramen that I bought and cooked for myself when I was a poor student in Japan on a summer programme.  The char siew in the ramen was tender and not disappointing.

If you want to just eat gyoza, you can choose from 6pc or 12pc to share.  However, they have A LOT of sets to choose from, most of them having a side of gyoza.  They’re not very expensive at $3.90++ for 3 pieces.  The taste is definitely better than buying those frozen gyozas and cooking them at home.

I found it so interesting that the taste of the fare in “Osaka Ohsho” is how Chinese food in Japan is like but to the normal person on the street, this probably tastes Japanese.  Weird that it’s being imported back to Singaporeans who are used to a more authentic Chinese taste.  But then “Osaka Ohsho” sells itself as Japanese, with the name proudly stating 「和食処」 (meaning place for Japanese food).  Well, I guess it’s the exoticism of Japan which sells, in this case.