Greedy friends and I went to Saveur again after dinner at Jai Thai, Purvis Street, for dessert (and dinner round 2 for a super greedy friend).  Note that we originally wanted to have dinner at Saveur but when I arrived at 6.50pm, the waiting list was so long that we would have to wait 1.5 hours before we could get a table.

Nonetheless, friend did leave his number behind and we did have a nice Thai meal in that 1.5 hours.  However, this post is on the yumminess of Saveur…let me proceed: 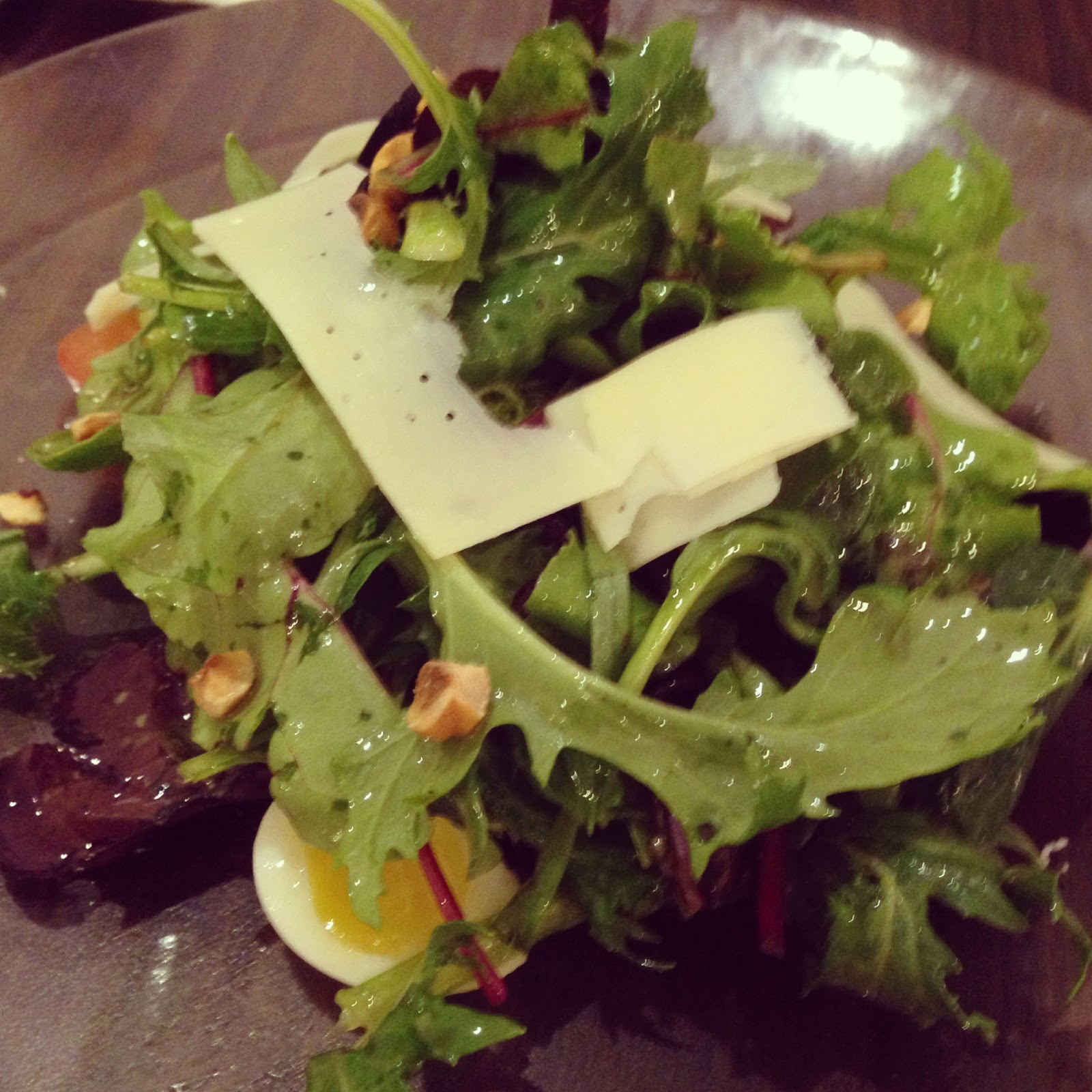 Looks like a simple salad?  Do not let it fool you.  Their salad has a quail egg that’s cooked just right, with the yolk slightly runny.  What’s the MOST spectacular part of this is the salad dressing! At first, I thought that it was uber oily but when I tasted it, I was pleasantly surprised and how NOT oily it was! The dressing was the perfect blend of tangy citrus and olive oil.  In fact, it seemed as if there was a perfume of citrus fruits.

Anyway, super glutton friend had a duck confit and angel hair pasta too but you can read about that in my previous post.  This time round, I managed to try the angel hair pasta and well, I wasn’t too wowed by it.  It’s a very simple pasta tossed with olive oil and pepper and topped with the sakura ebi.

We were there mainly for dessert and I ordered the “Cookie Milk ($9.90++)” off their special menu.  It has been a LONG time I’ve been served froth.  Last time I saw so much edible froth was in 2009 at Tom Aiken’s in London. 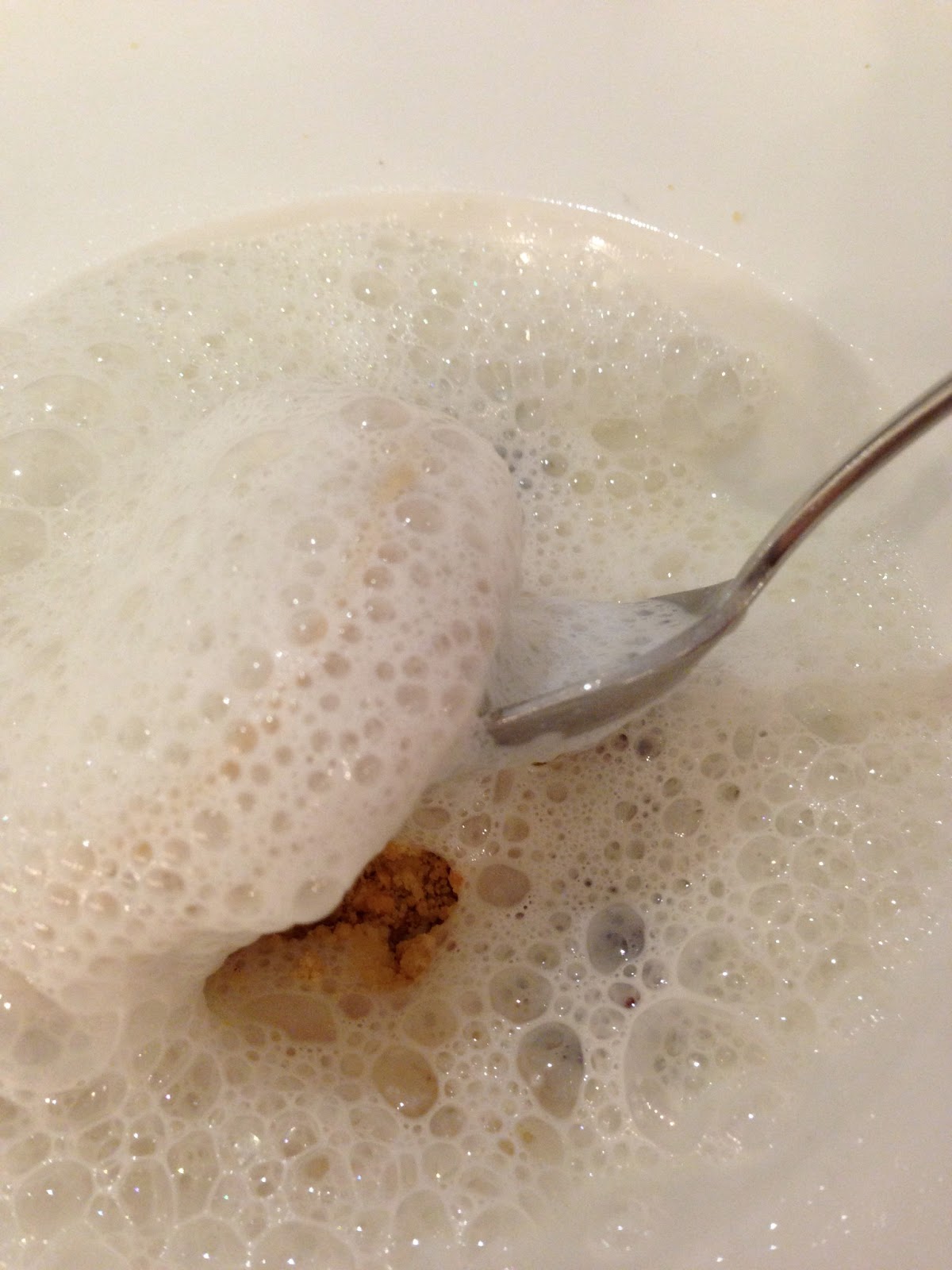 Ah…what treasures lie beneath?  It’s ice cream with peanut butter and milk froth.  Wait.  There’s a surprise in it.  They have sprinkles of honey pops or whatever and it’s like fireworks in your mouth!  Super fun dessert!! Will definitely bring out the kid in you. 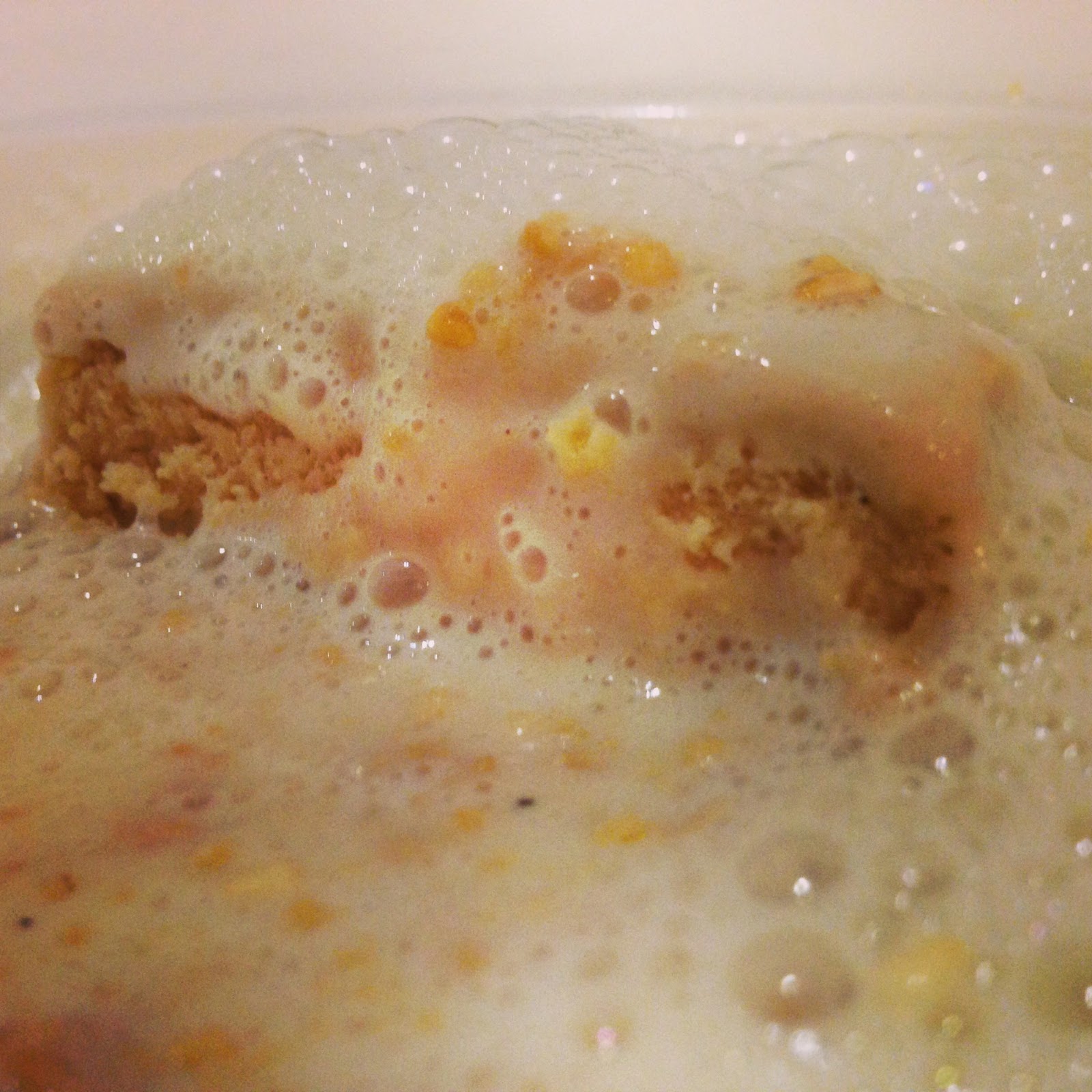 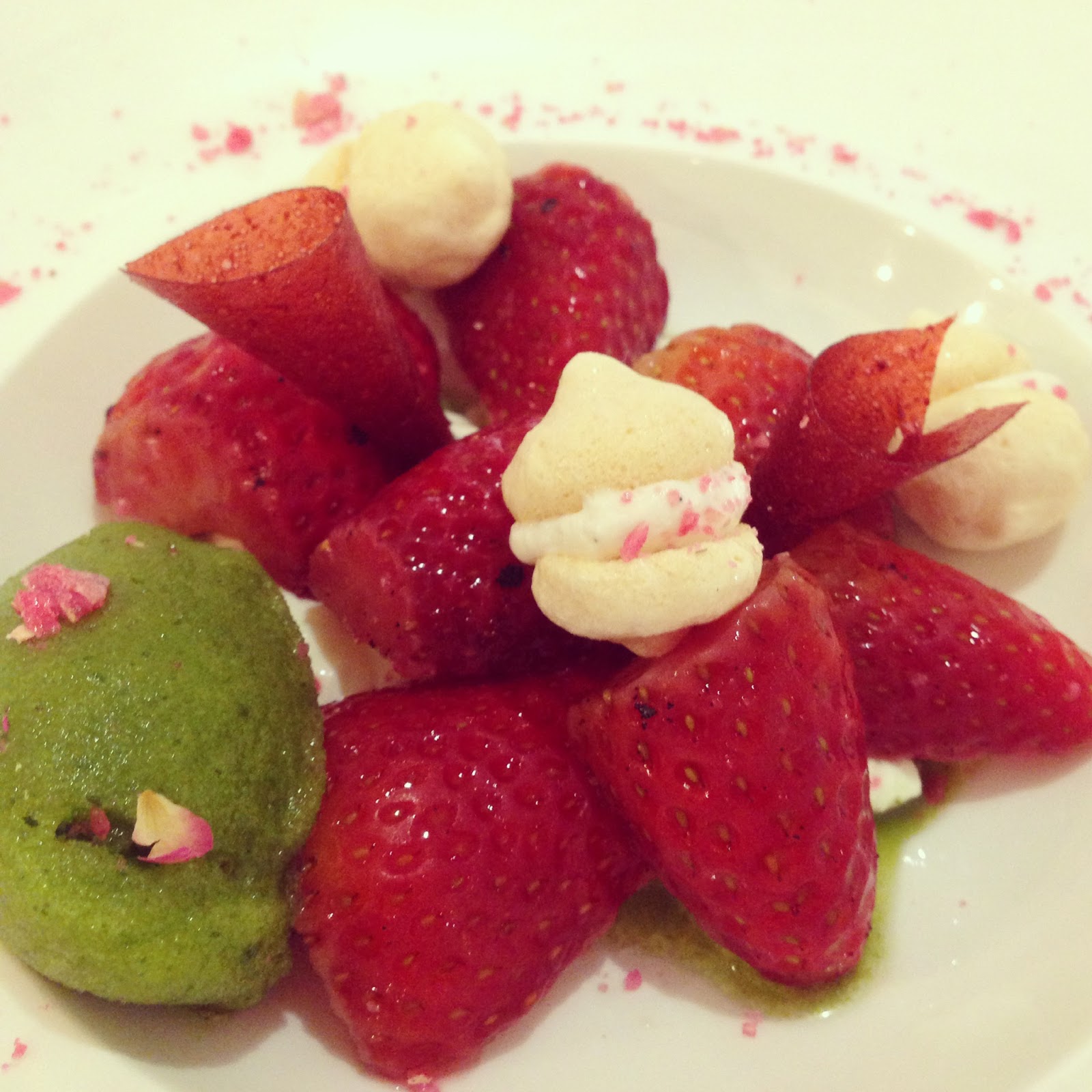 My friend ordered another dessert from the special menu which was Strawberries with a basil sorbet and mini meringue biscuits.  Basil sorbet? Yup…I frowned when I read that initially but I tried it and it was very very refreshing.  Amazing how everything just came together and was the perfect mix of sour, sweet, cold, soft and slightly crunchy.  Wow.

The week after that, I just HAD to go to Saveur for lunch with my colleagues.  I ordered their Beef ribs ($14.90++) and the Cookie Milk again. 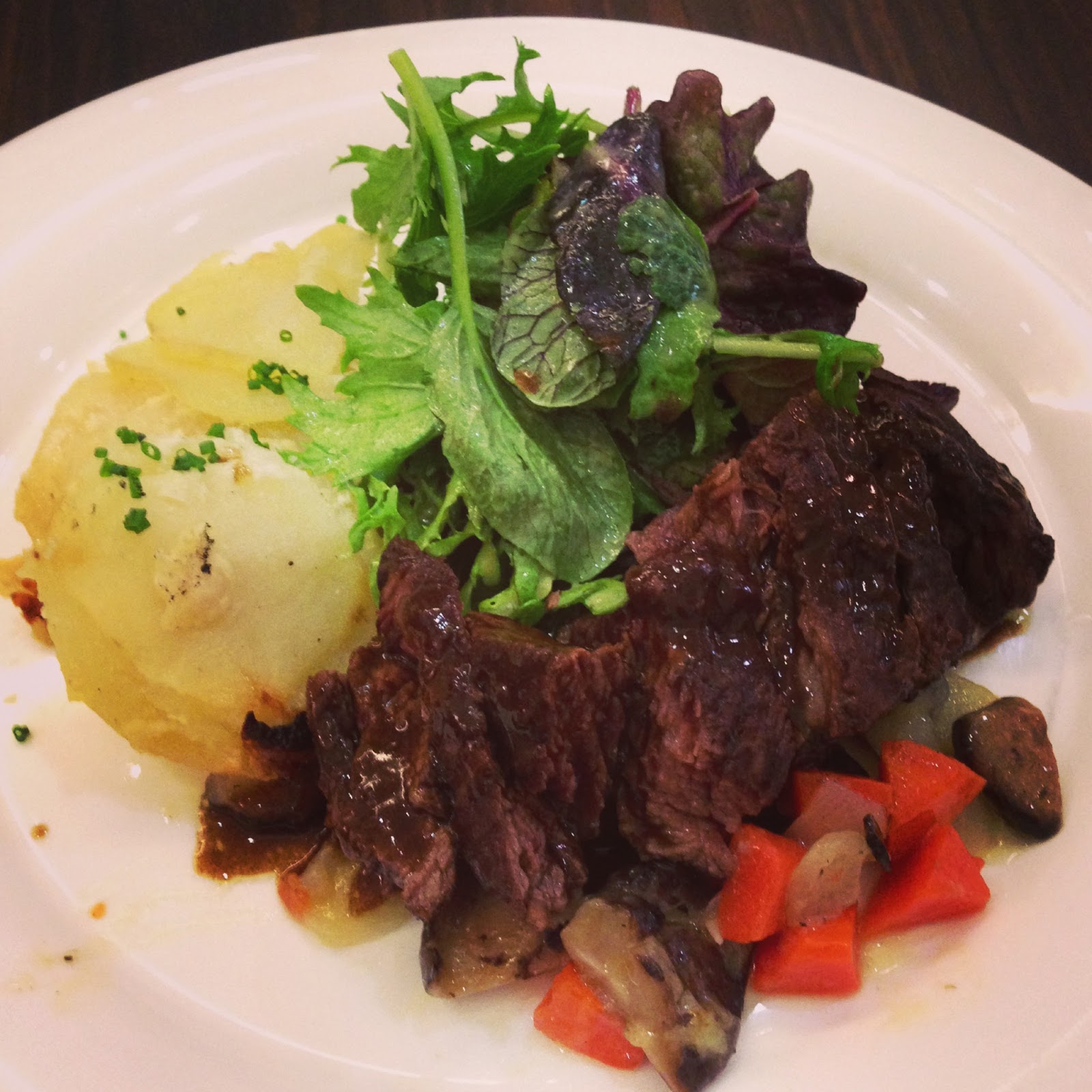 The beef was cooked wonderfully.  Each piece was so tender that no knife was necessary.  You will use the knife to halve the slices so that you get to savour each morsel of beefy goodness twice as many slices as there are.  The potato gratin was also cooked perfectly.  My only complaint was the horseradish dressing in the mesclun salad that accompanied the dish.  I hate wasabi and horseradish.  But if you like them, it is a very nice pairing with the meat and potatoes.

Colleagues and I have fixed Saveur as a weekly lunch destination.  ‘Nuff said.  Are you sure you’re not going to try the food there once?