This year, we didn’t celebrate our parents’ birthdays together because Mum had a special 60th birthday party.  So, for Dad, we decided to go to the Spanish restaurant Catalunya located at Fullerton Pavilion. 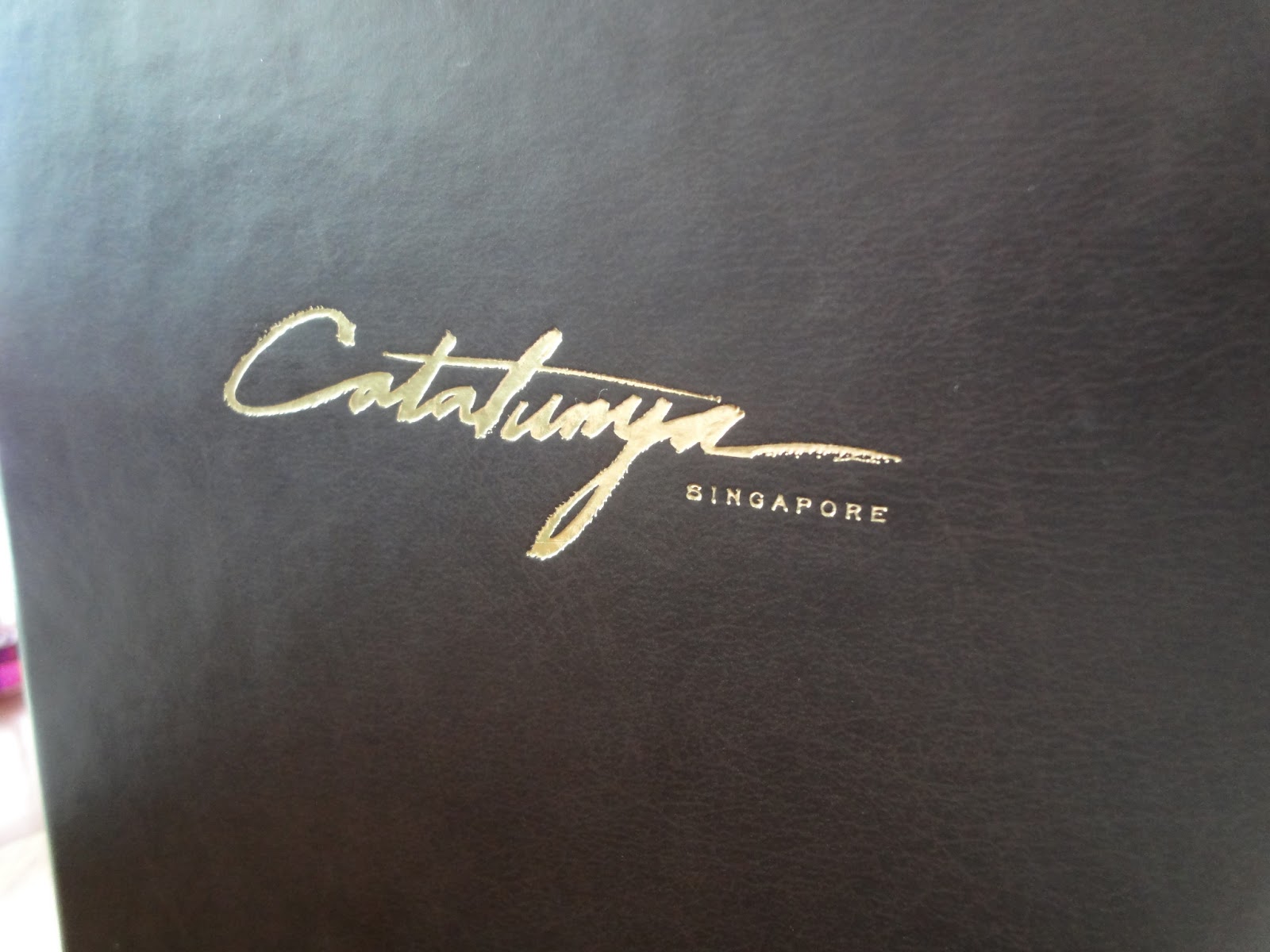 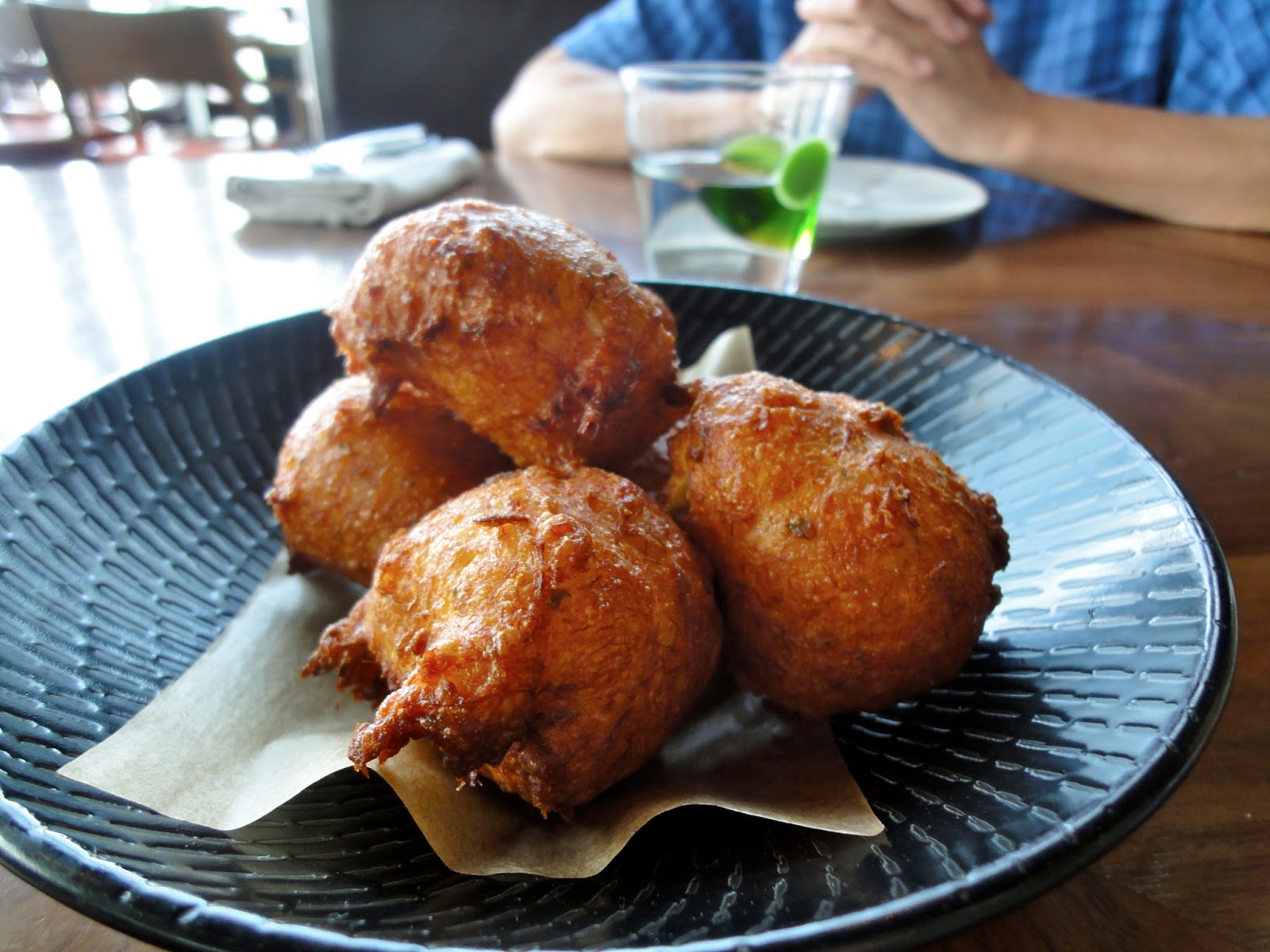 For starters, we ordered some tapas, like cod fritters (above) and bread with tomato and olive oil (below).  The cod fritters were quite tasty as it was smashed up fish mixed with flour before frying and after it’s golden brown, garlic aoli is stuffed inside to give it a creamy burst. 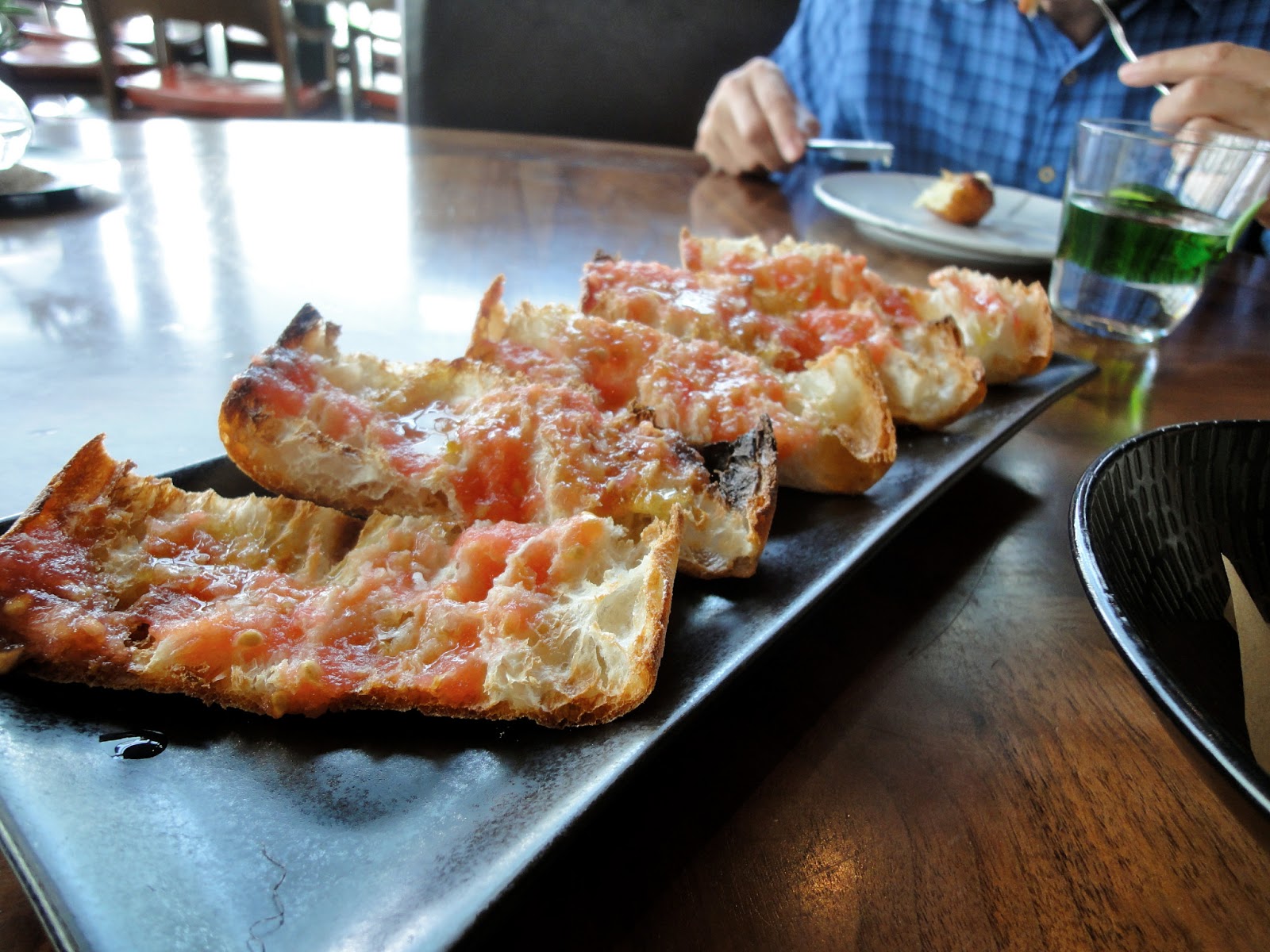 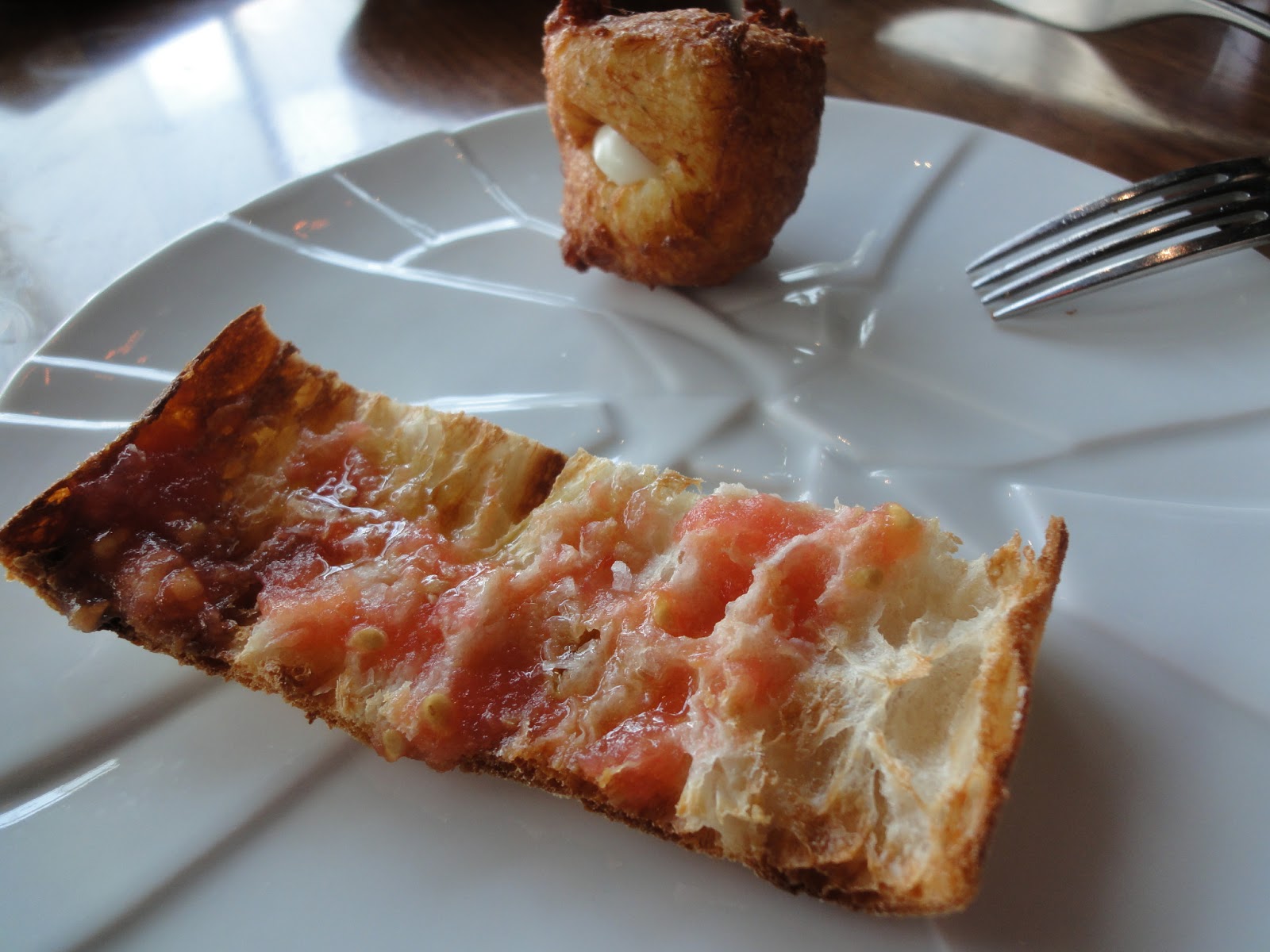 The bread was very yummy and it was like a dry and flatter version of a bruschetta.  I think it’s overpriced at $10++ but still make a good tapas.

Below is the Tortilla de Trumpco (if I remember correctly).  One must realise that tortilla in Spain actually means omelet and not the flatbread/chips.  Verdict for this tortilla? Slightly weird tasting.  I’ll stick to the normal tortilla of eggs and potatoes. 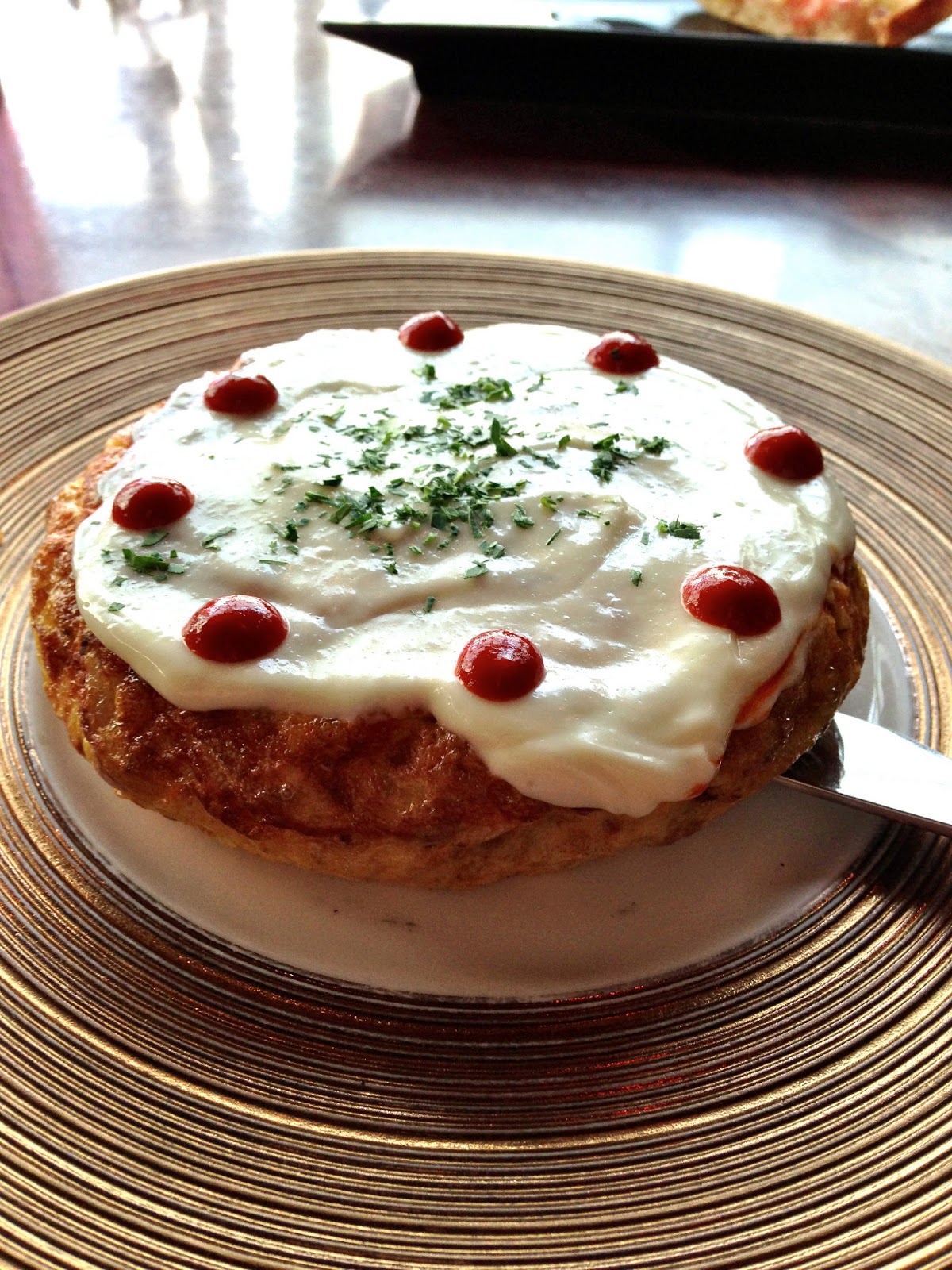 We also ordered the roast meat canolene…which I’ll call a roast meat canoli instead.  It’s minced beef and chicken mixed together, wraped in a light pasta-like pastry and baked. It is served with cheese and a creamy sauce.  Quite yum, this dish. 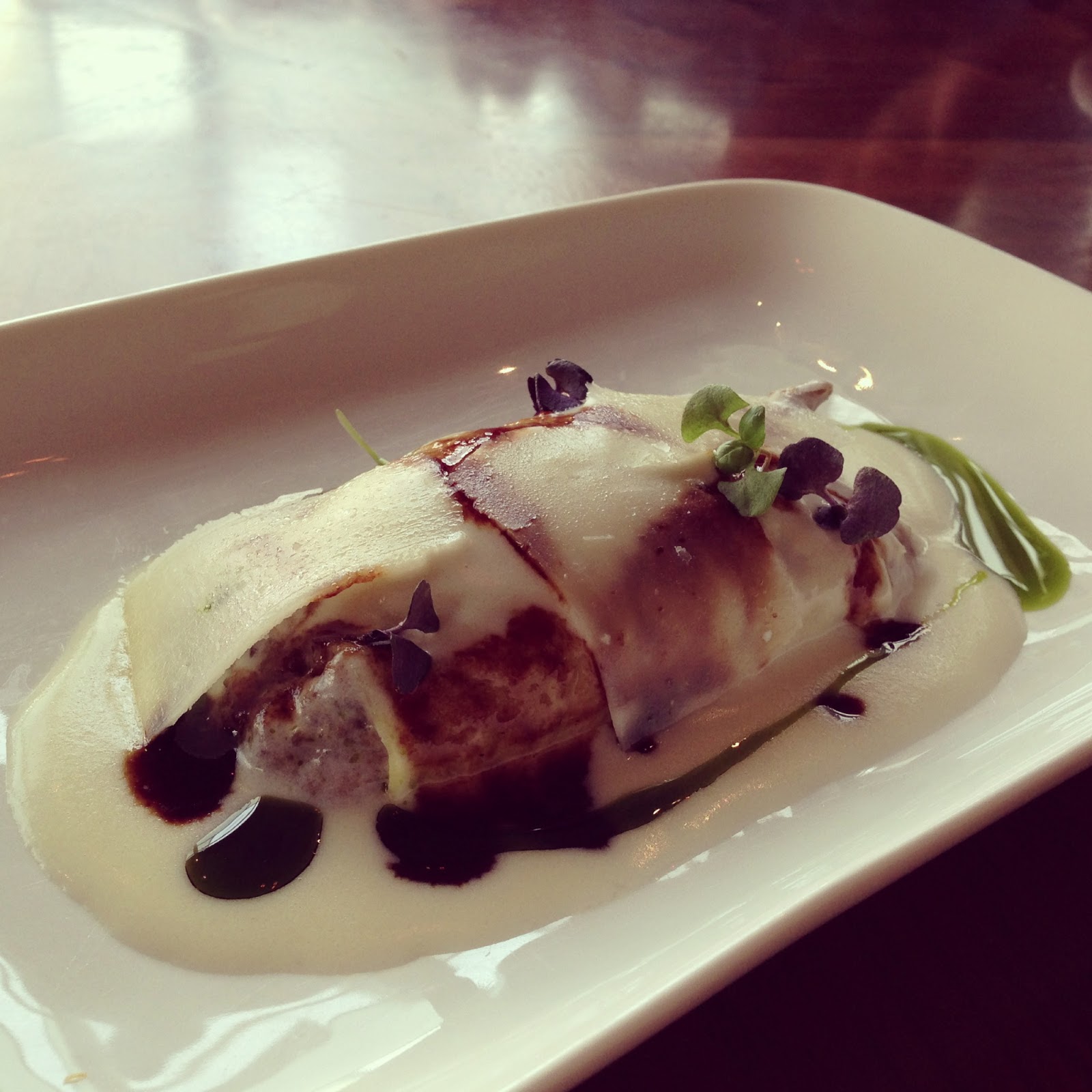 The highlight of our meal was the roasted suckling pig.  This is only half a piglet at $160++.  They serve it on a chopping block and… 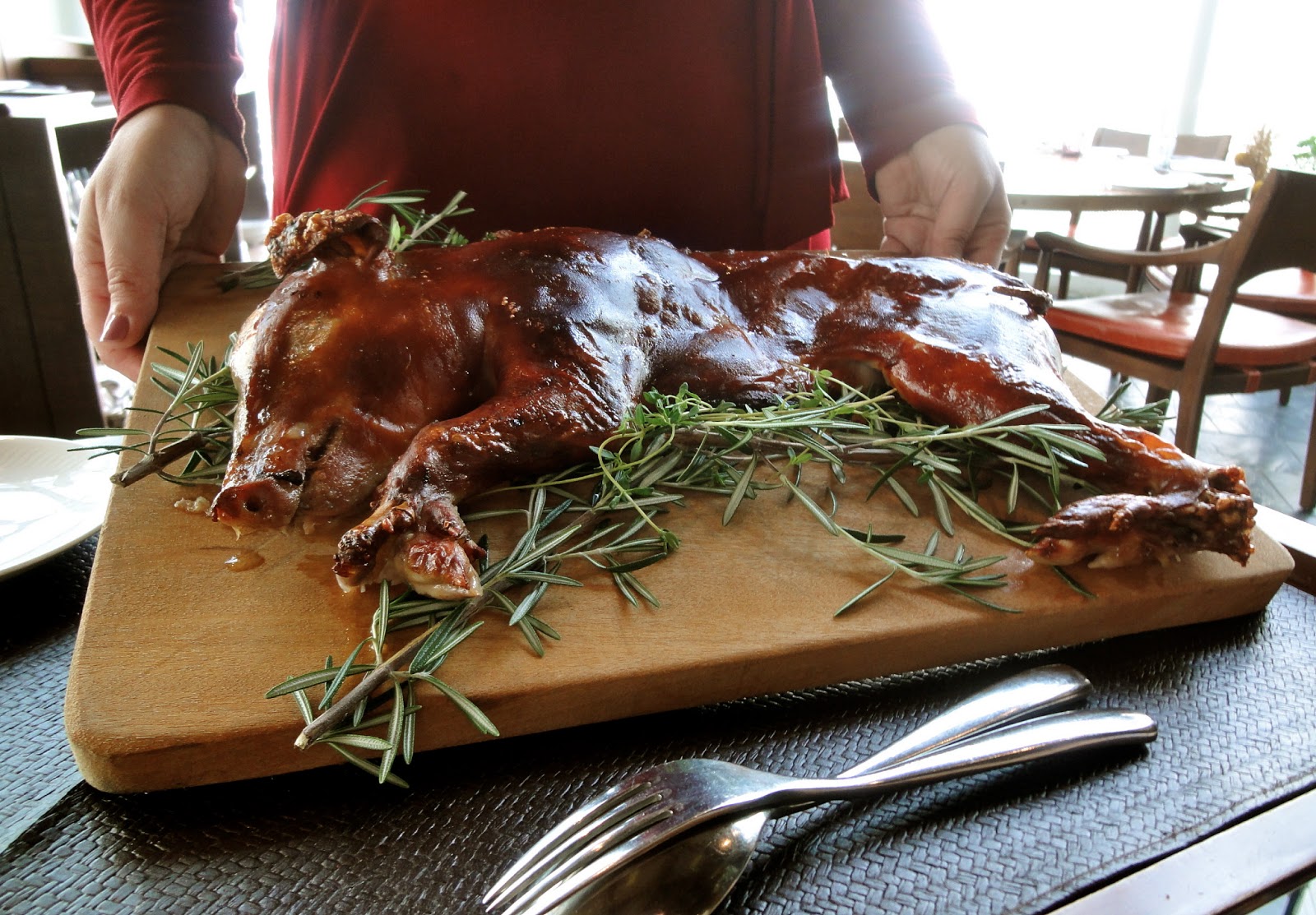 It is so tender and soft that they traditionally chop it up with a small plate!  Best parts of the pig? The ears for crispiness and cheeks for tender, melt-in-your-mouth porkiness.

Pardon the blur photo as the light was coming in from the window so I had to turn on the flash…not the most ideal. 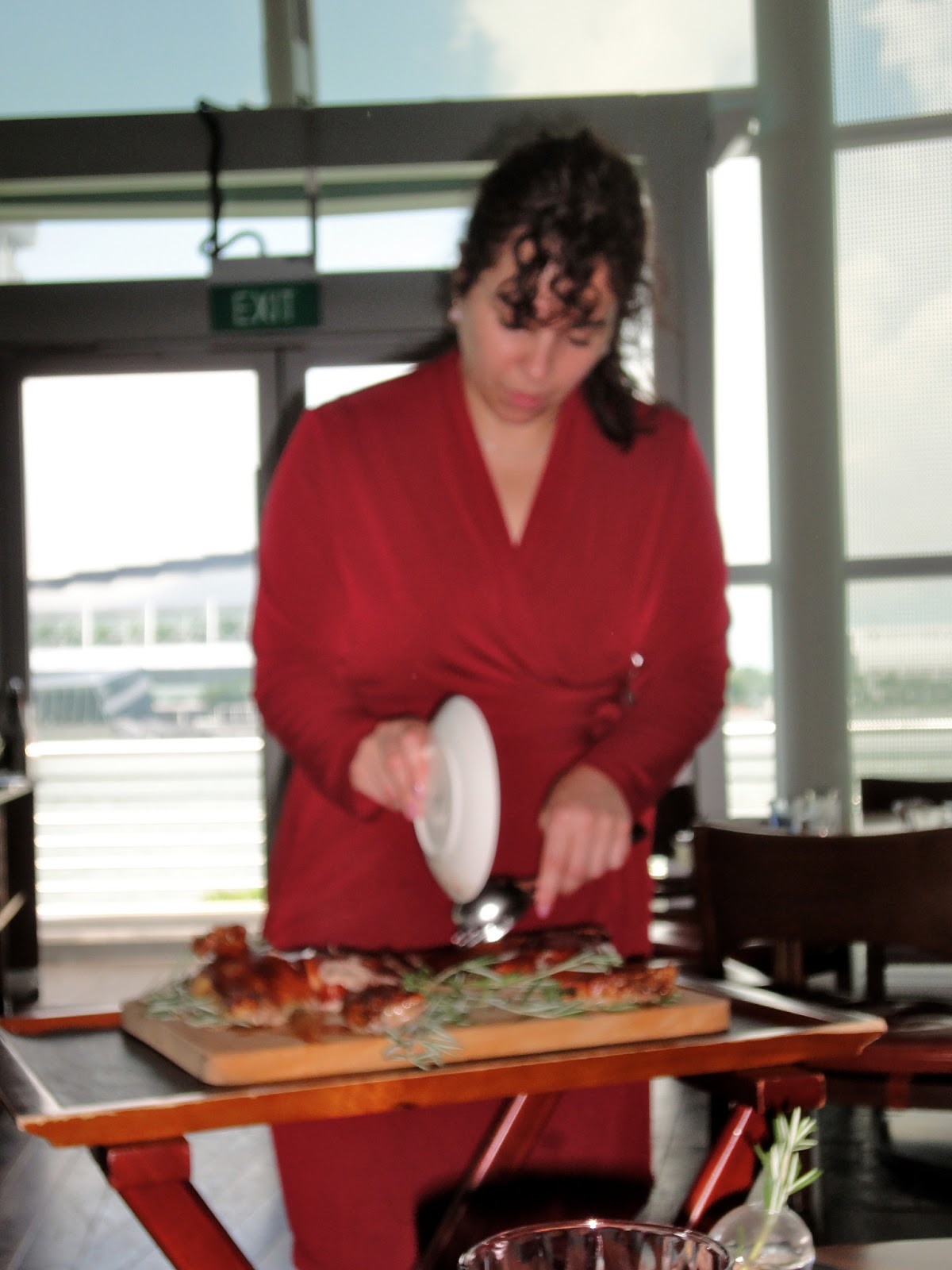 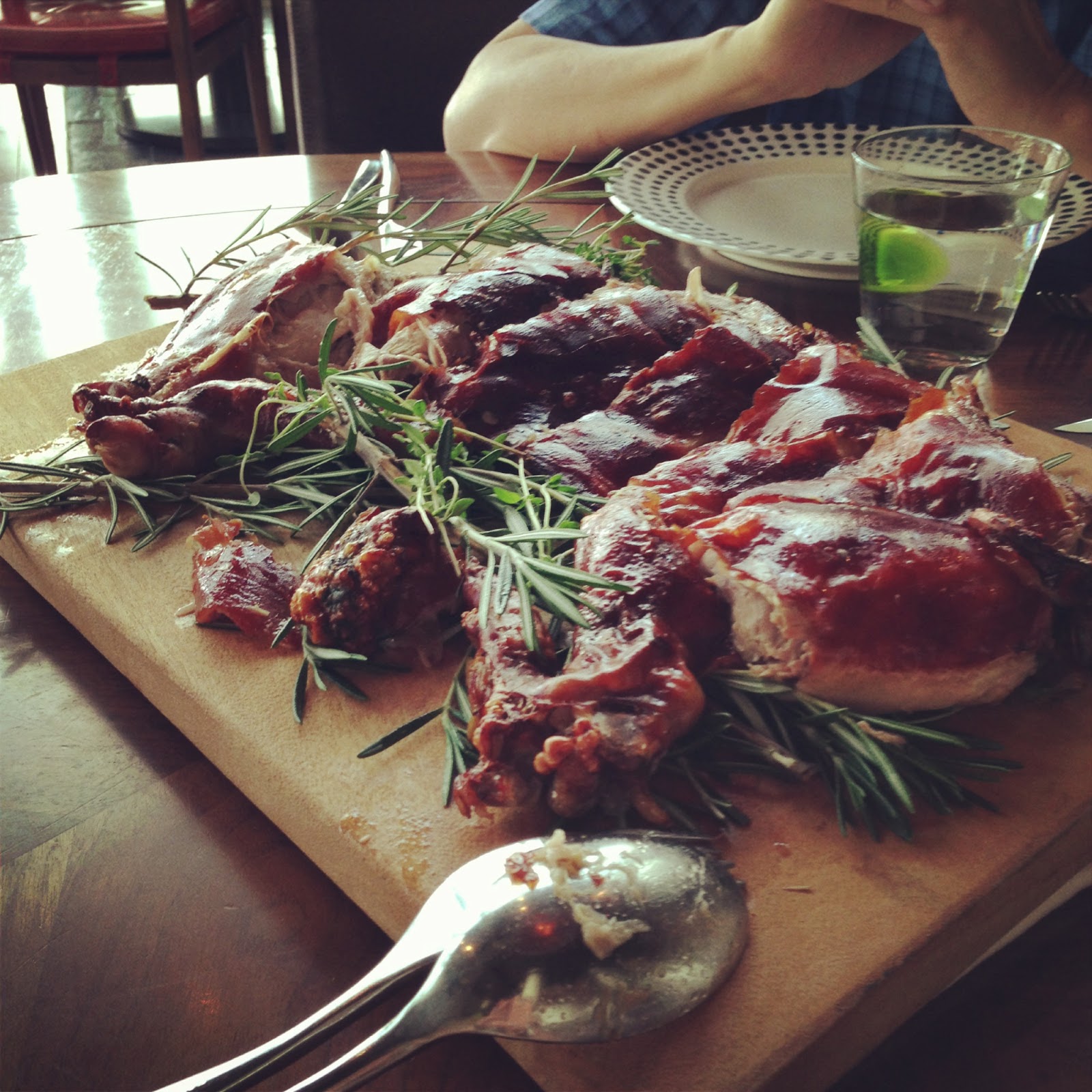 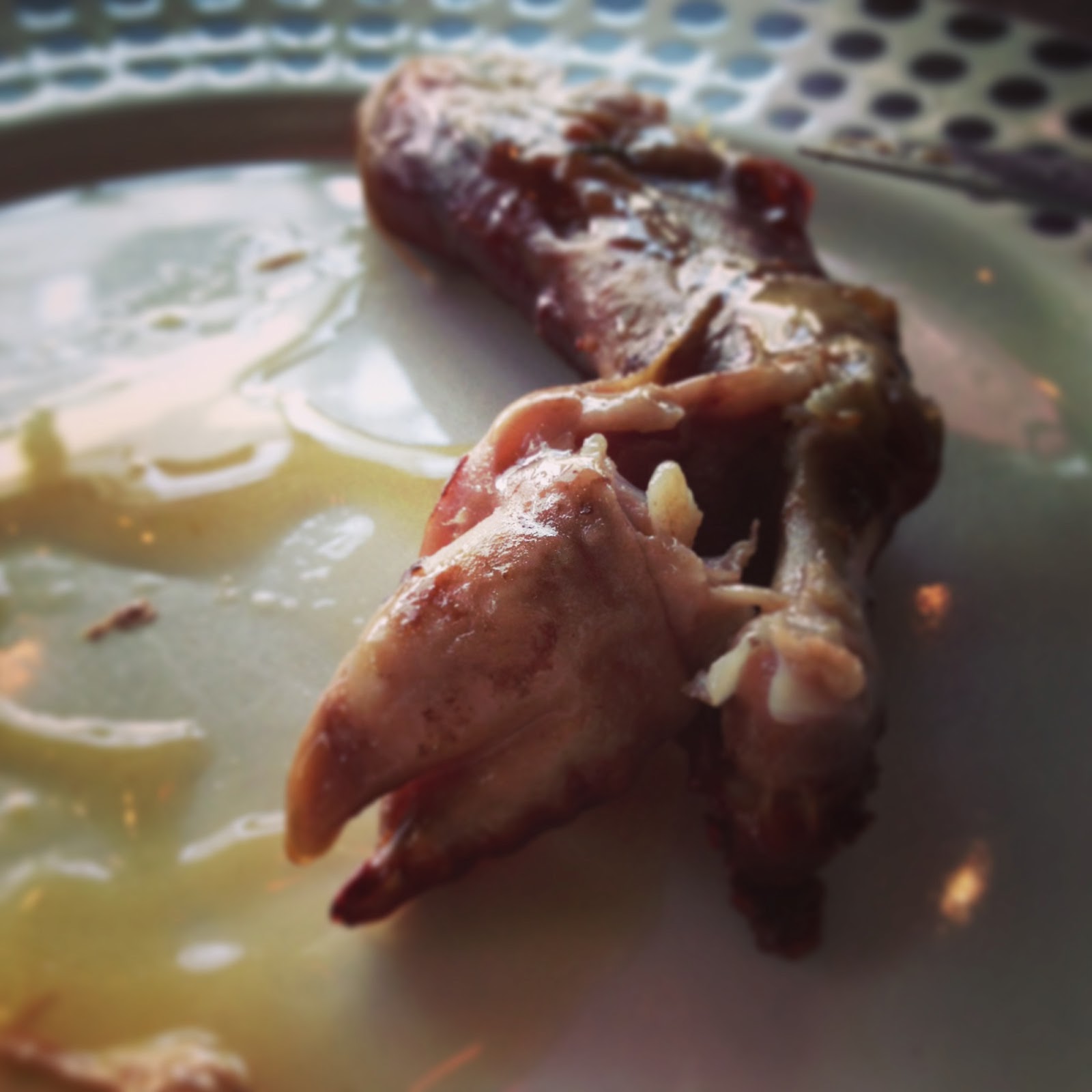 For our mains, we ordered the squid ink paella that comes with aoli. Best part? One of the few paella I’ve eaten in my life where the squid is still uber tender.  However, it was a tad salty but the chef and the maitre d’ insisted that it’s not salty but it’s just very flavourful because of the stock from the seafood.  Okkk…not going to argue with you on that.  We’ve eaten very flavourful but not salty paella before… 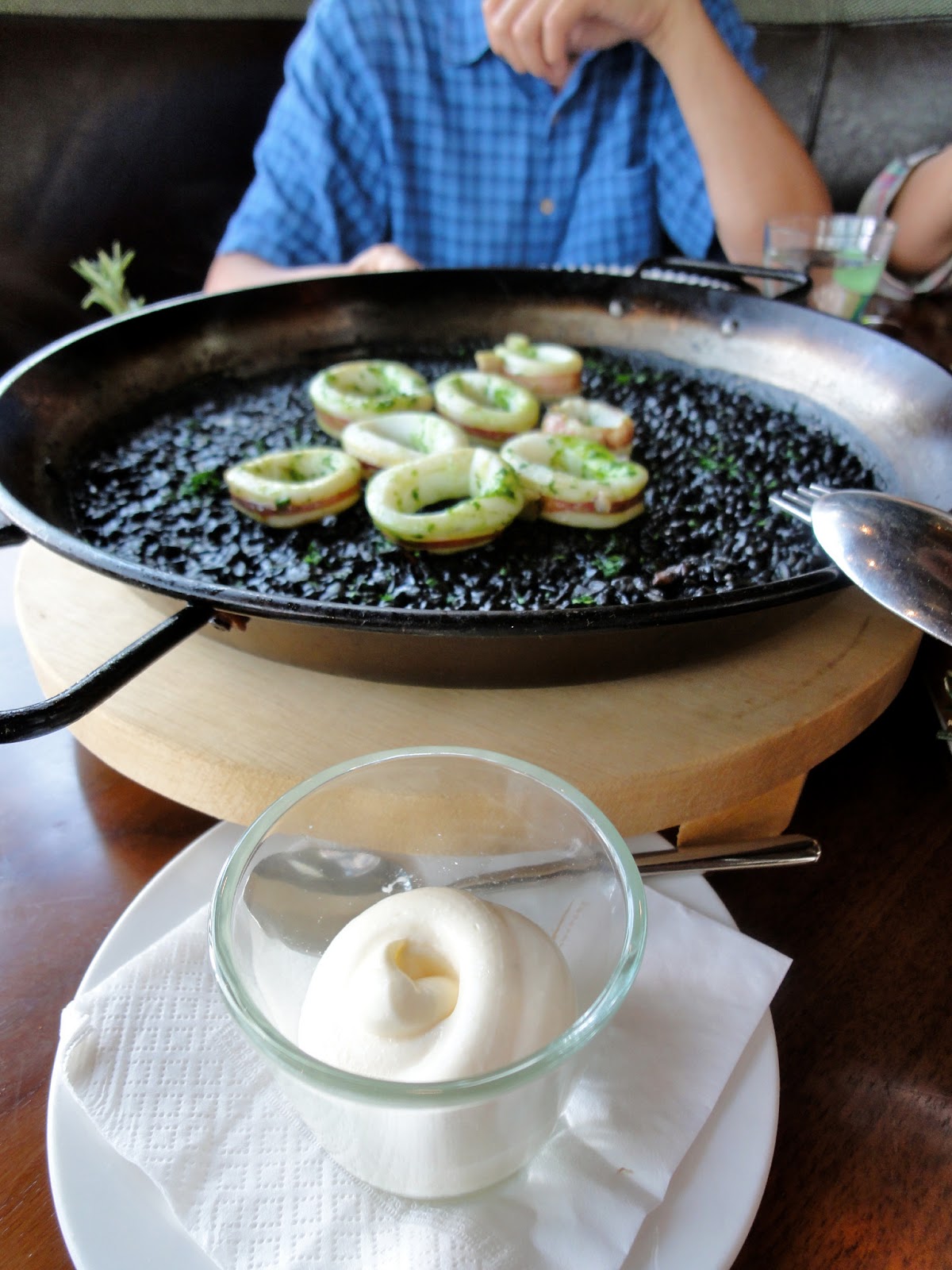 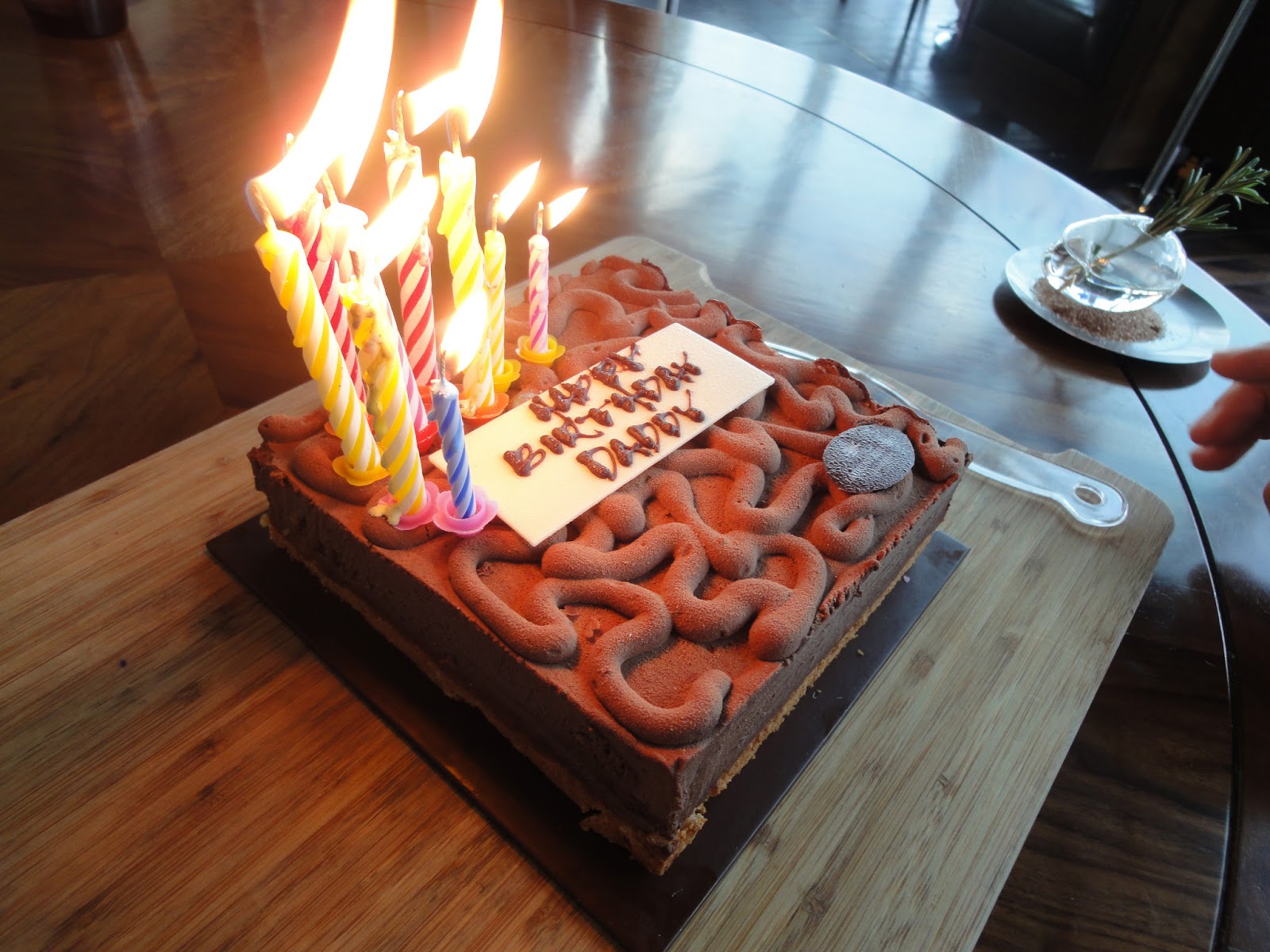 Overall, the pork may look small but it was a lot of food for us 4.  There is only so much pork that one can eat, despite the deliciousness of it.  Surprisingly, the roasted suckling pig had a bit of a strong smell to it, which made us wonder whether it’s a male piglet.

The view from the restaurant is quite gorgeous so do make a reservation in advance and request for a table near the window in the evening.  For lunches, stick to somewhere further inside, unless you enjoy the greenhouse effect.

In terms of prices, I think they give more value than Serenity, another Spanish restaurant at Vivo City.  The turn off, however, would be the prices of some of their tapas and the fact that getting a dinner reservation means more than a week’s notice (sometimes).  Nonetheless, there are a few reasons why Catalunya has been voted one of the best restaurants in Singapore by IS Magazine.  If you do have the budget and the time, I’d say give Catalunya a try.

Previous postLast Day in Osaka (aka. Day 4) Next postMUST try dishes at Majestic Bay restaurant – Gardens By The Bay