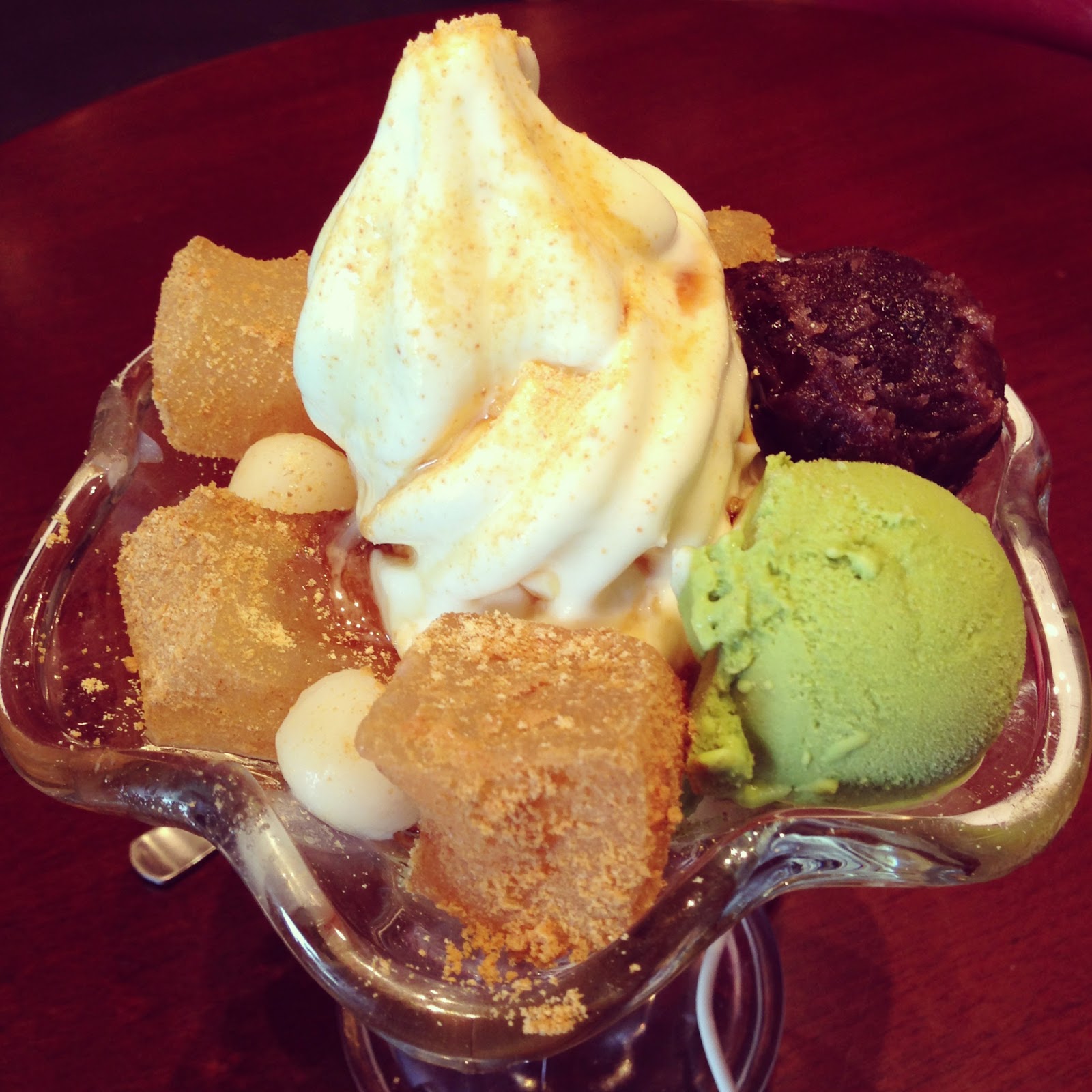 After lunch, bro suggested dessert and we were about to head over to Fruits Paradise but we chanced upon St. Marc Cafe at Vivo City.  This latest Japanese import is a cafe specialising in desserts and baked goods.  The first St. Marc Cafe was opened in Ginza in 1987 and true to it’s Japanese origins, the menu had delightful names for its desserts such as:

They also had various ice creams served in large waffle cones too!  I ordered their Kyoto Delight which is a sundae of vanilla soft serve ice cream with matcha ice cream, azuki beans, gyuhii and mochi on a bed of corn flakes and pound cake with a pool of black sugar syrup at the bottom.  All of which was sprinkled with soy bean powder.

This sundae represents all the stuff that I love in Japan.  Yum!! Discovering the corn flakes, pound cake and black sugar was the delight for me.  However, with the syrup all at the bottom, it was incredibly sweet towards the end and I couldn’t really finish it.  I’d like to have more matcha to balance the sweet though.

The signature product of St. Marc is their Chococro, which is a chocolate mochi croissant.  There were a lot of people in front of me in the queue who were buying it by the boxes so my bro naturally bought a couple of them.  Unfortunately, he and my mum started munching on them before photos could be taken.

I found it strange that St. Marc also calls the Chococro their daifuku, because it’s not something in a mochi but the mochi is in the croissant.  As for the taste, I found the Chococro so-so.  You can’t really fault it though.  The chocolate was smooth and reminded me of Nutella while the mochi was soft and gooey, and the croissant was buttery and flaky.  I guess it would make a nice tea snack or light breakfast with a cup of tea but I wouldn’t be buying it by the boxes.  Especially when those small little buggers cost $2.60 each.

Nevertheless, I like the vibe of the cafe and I wouldn’t mind trying other desserts! I have a separate tummy for desserts..lol!