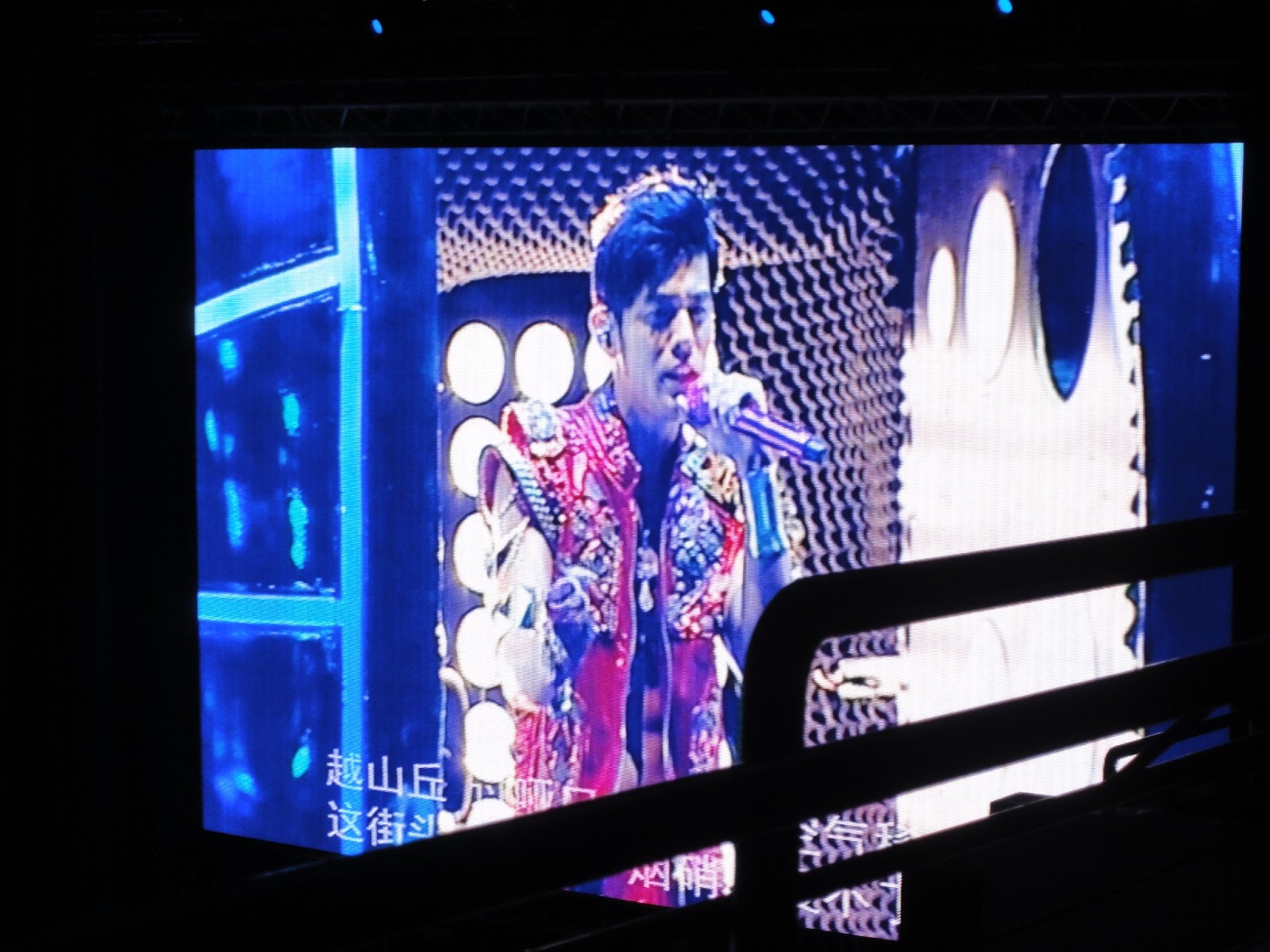 Tada…Mr Jay Chou is looking hotter than ever! He started the concert by teasing all of us with a view of his buff bod and six pecs!! *Wolf whistle* 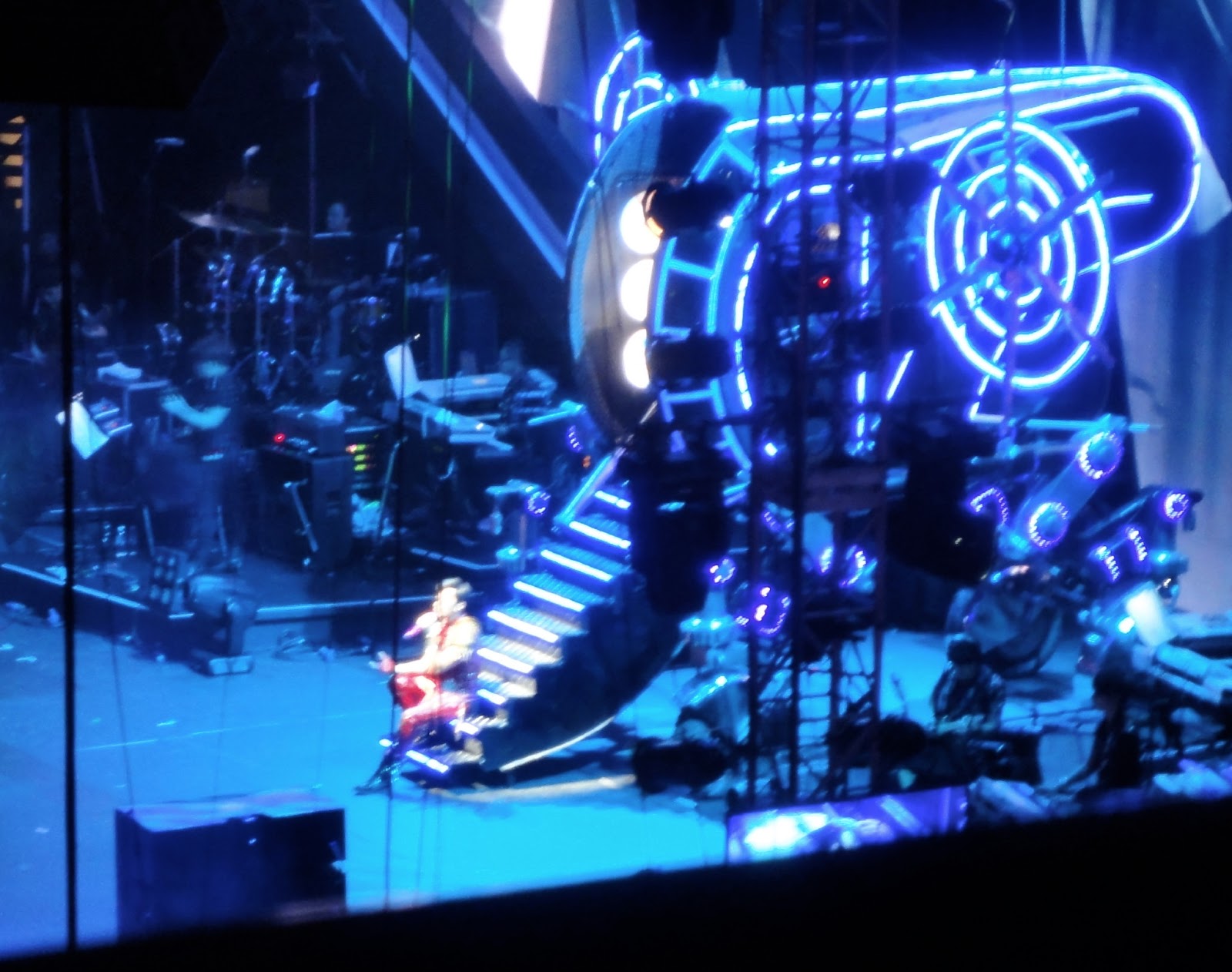 Jay started the theatrics with a full media onslaught and finally coming onto stage in that flight capsule.

Despite his futuristic outfits, Jay is best singing his old songs – ballads.  Below is him on the super elaborately decorated baby grand piano. 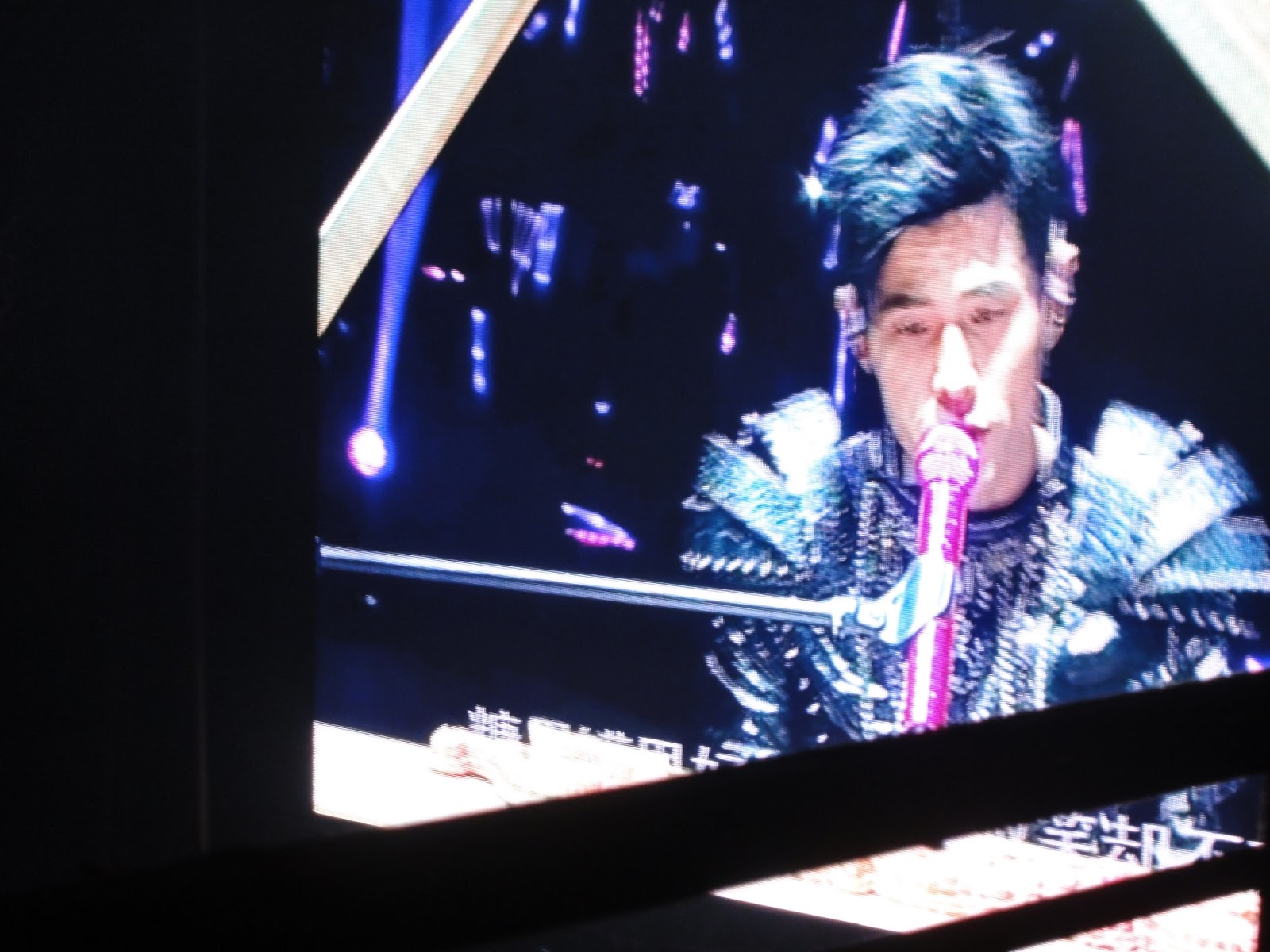 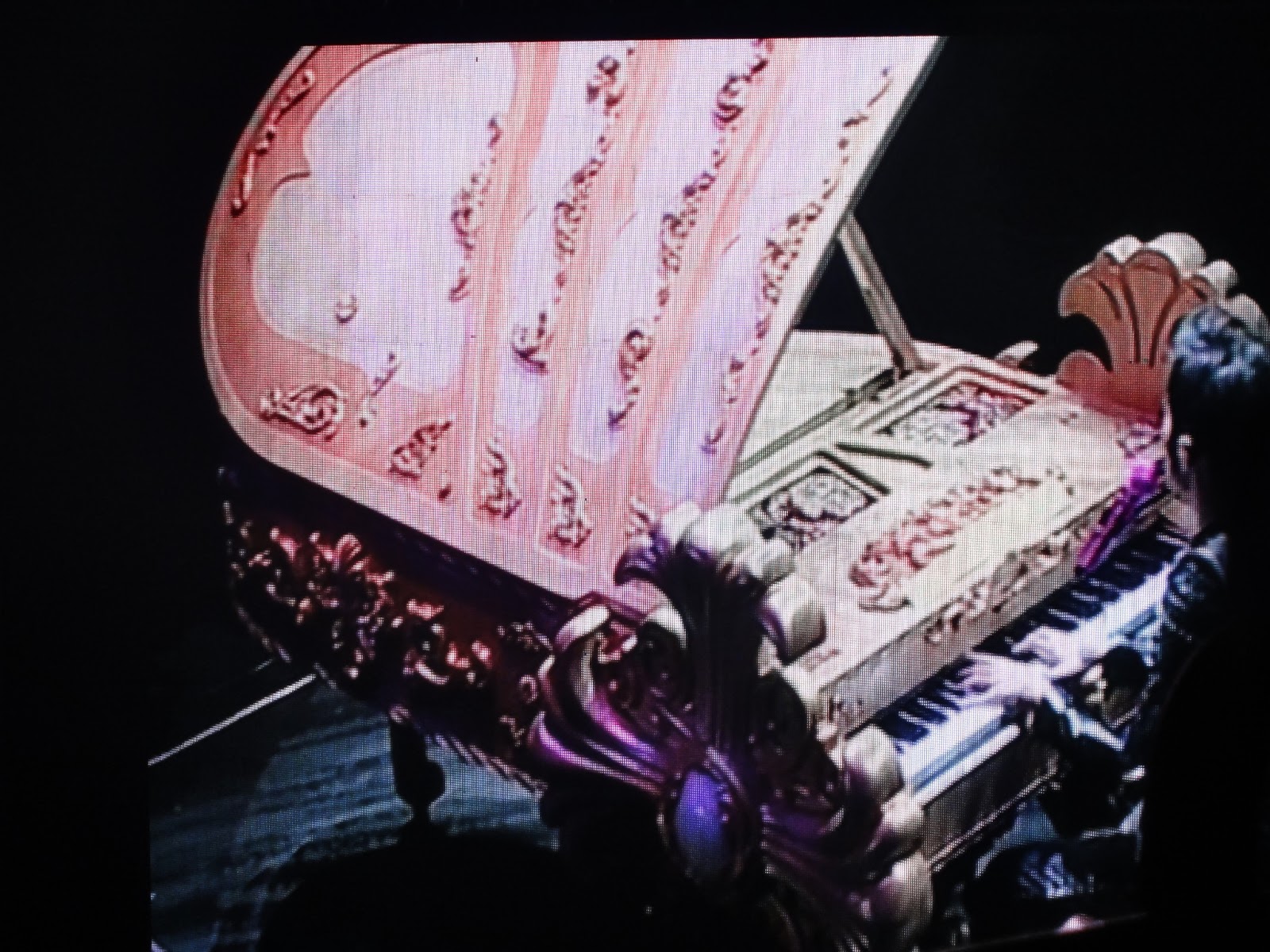 After that wonderful serenade, Jay just HAS to promote his new movie in which he self-directed and stars in.  The songs are also in his latest album, Opus. 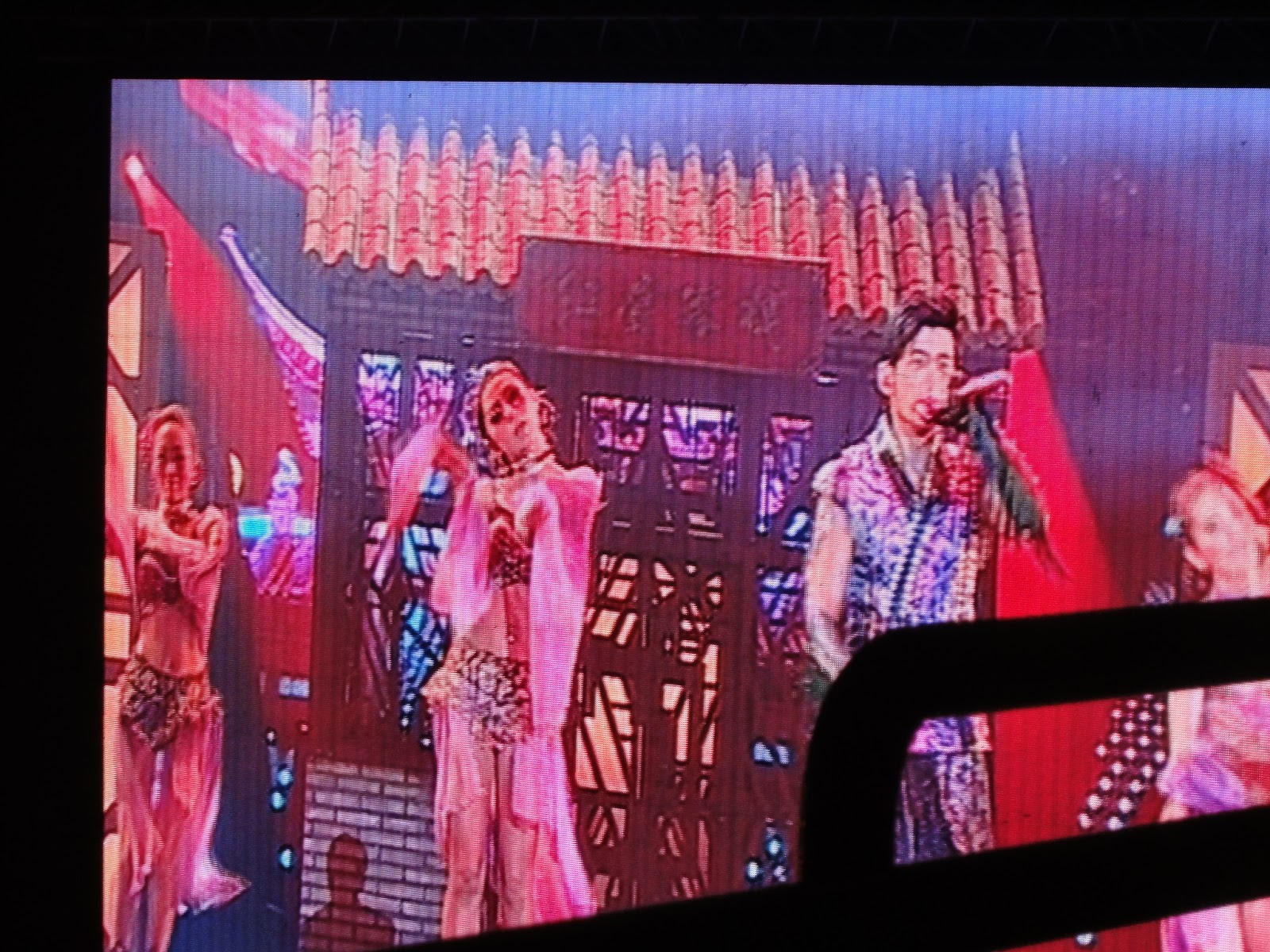 The crowd enjoyed his singing but you could tell that the reception to these new songs were relatively lukewarm.  It didn’t help that the filler before this set was a trailer of Jay’s new movie which was very surprising…in the bad way.  The movie trailer reminded me of Grease meets Baz Lurhman’s Romeo+Juliet.  It could be really funny as a comedy or go seriously pear-shape.

As you know, with most Chinese entertainers, there are a lot of costume changes and to facilitate this, a few fillers are required. 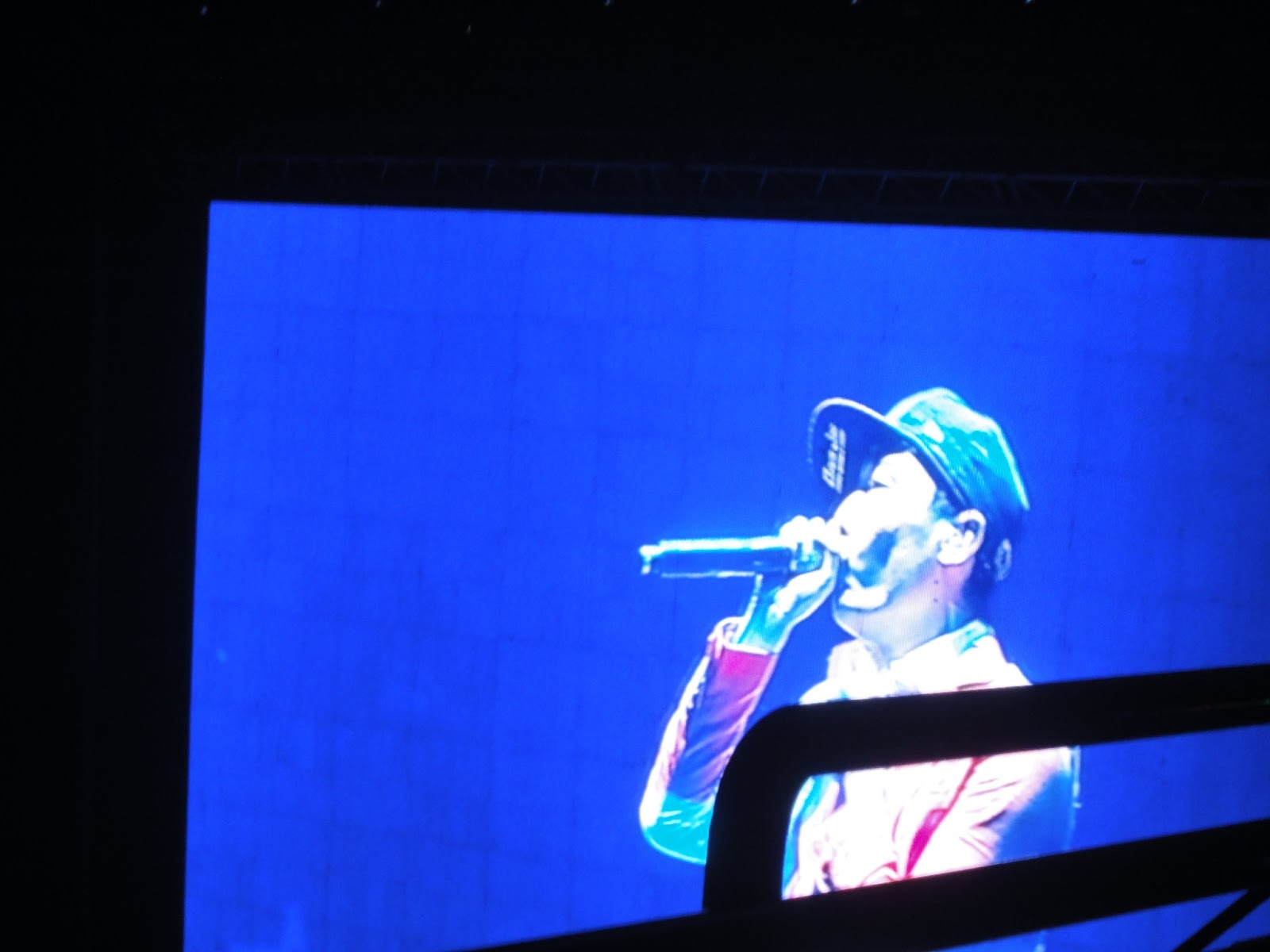 Above is one such ‘filler’ but he is THE most amazing beatboxer I’ve ever come across so far.  Simply AMAZING as to how he managed to make the variations of volume changes and he even beat boxed with the mike pressed against his throat to mimic being outside a club and hearing the beats.  I would’ve loved to just have him and Jay perform alone.

This transitioned to the acapella version of one of his new songs which can be loosely translated as ‘Stupid Ole Clock’.  This version was much much much much better than the album version.  Loved how the beat boxing added that R&B/Hip hop edge to it too. Jay – please sing more songs acapella! 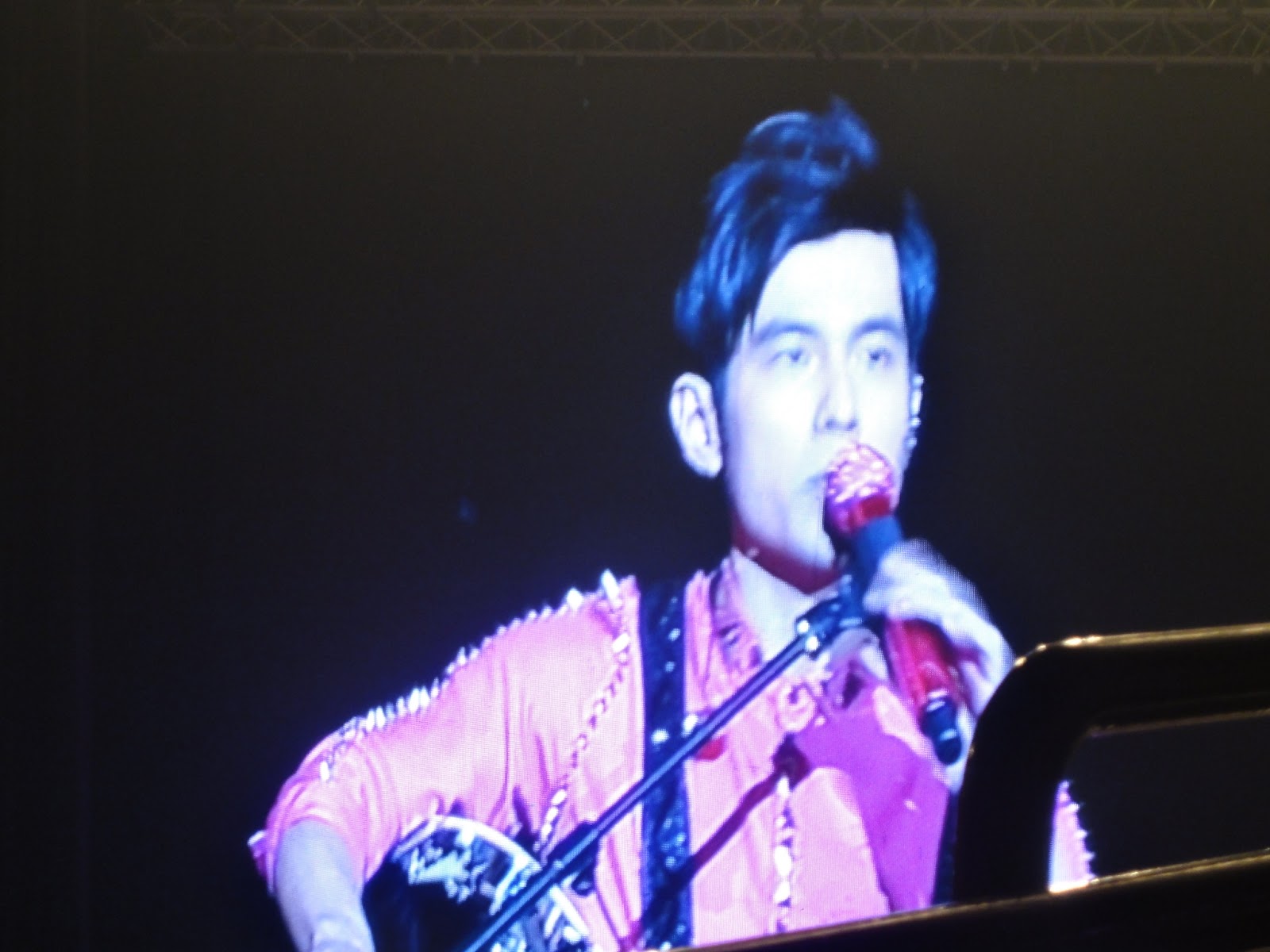 The next best way to enjoy Jay’s performance is really just him and a musical instrument.  Above would be him and a guitar.  Simple but yet so soulful.  Don’t mind the garish hot pink shirt which matches his hot pink mike.  I want his mike though.

The performance that I really enjoyed in terms of theatrical effect was when the lights were all turned off and the audience was also asked to switch off all of our light sticks.  It then proceeded with him and his dancers performing the song ‘Hey Girl’ behind a light screen where it dispelled ‘reality’ for moments and there were multiple Jays together with the real Jay on stage.  Shooting stars completed the romantic R&B song and mood.  It was really quite a beautiful show.

As usual, Jay ended the concert on a high note with a fast-paced Hawaiian-themed song. 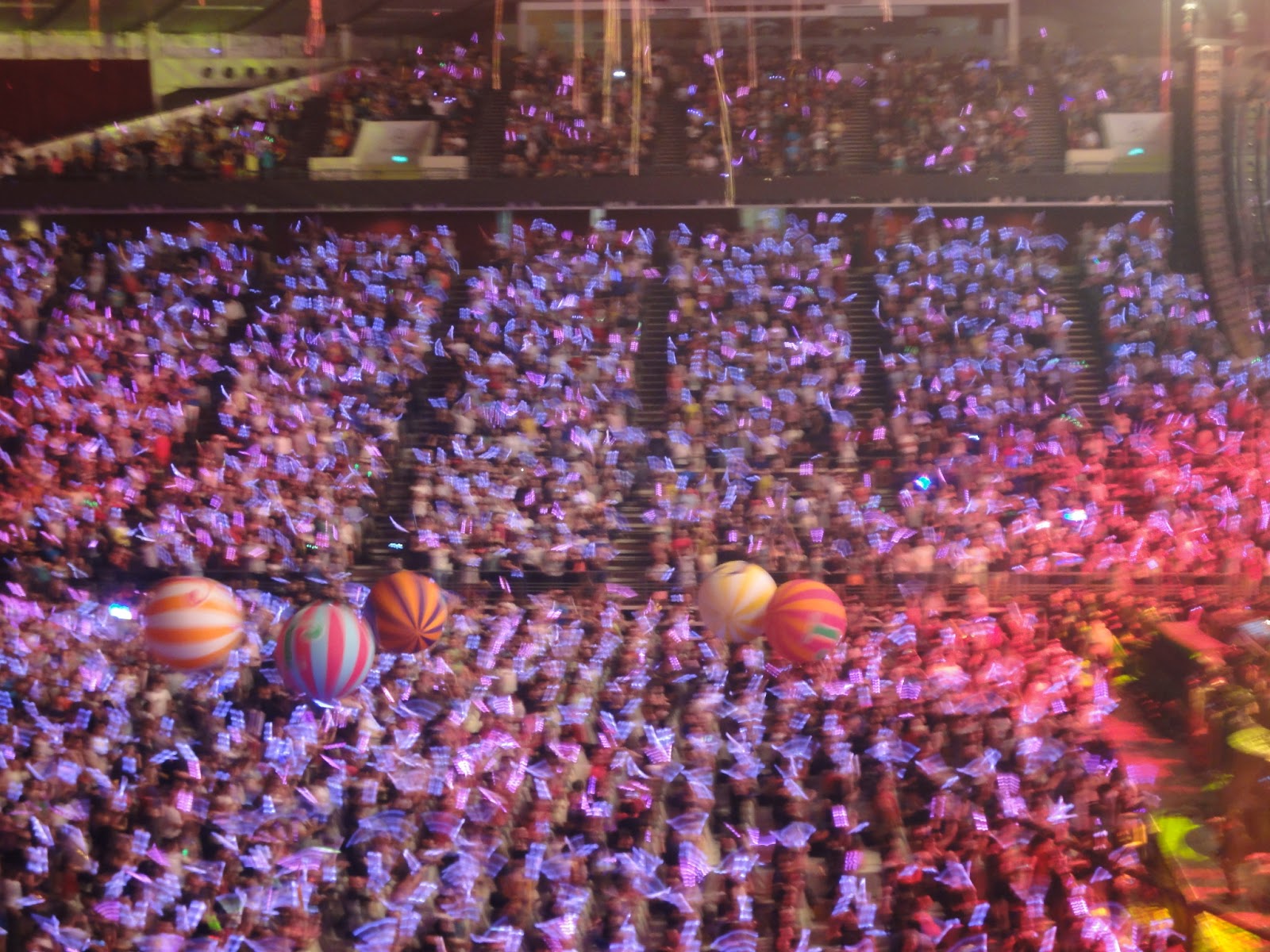 Huge ‘beach’ balls with the letter ‘J’ were thrown into the audience and this was bounced around throughout the whole song.

It was such a shame that I went to his opening concert so there was only 2 encores, which were already planned.  He didn’t come out for another encore and the audience was already happily leaving the stadium when the lights came up.  Alas, practical us had work the next day. 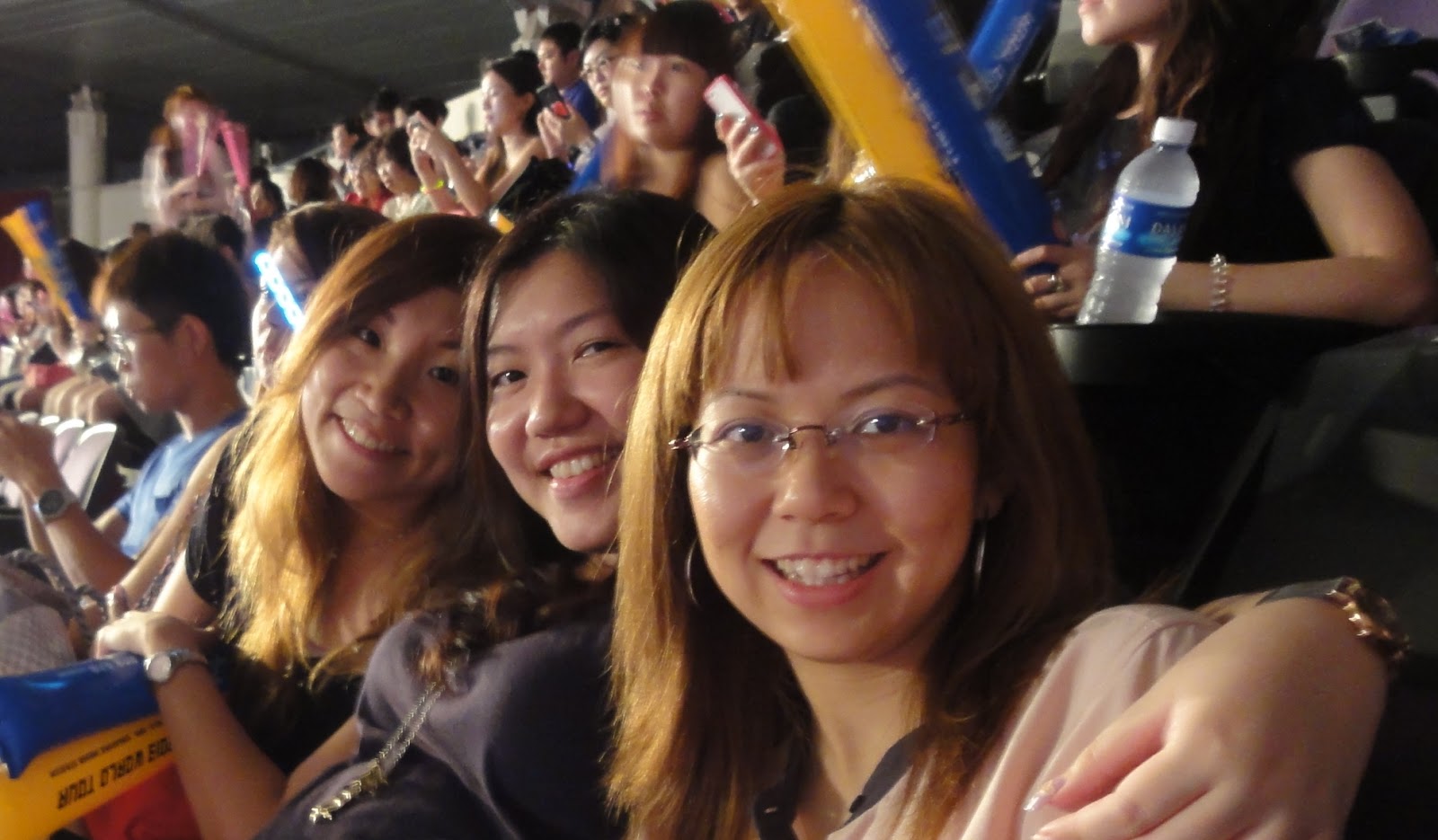 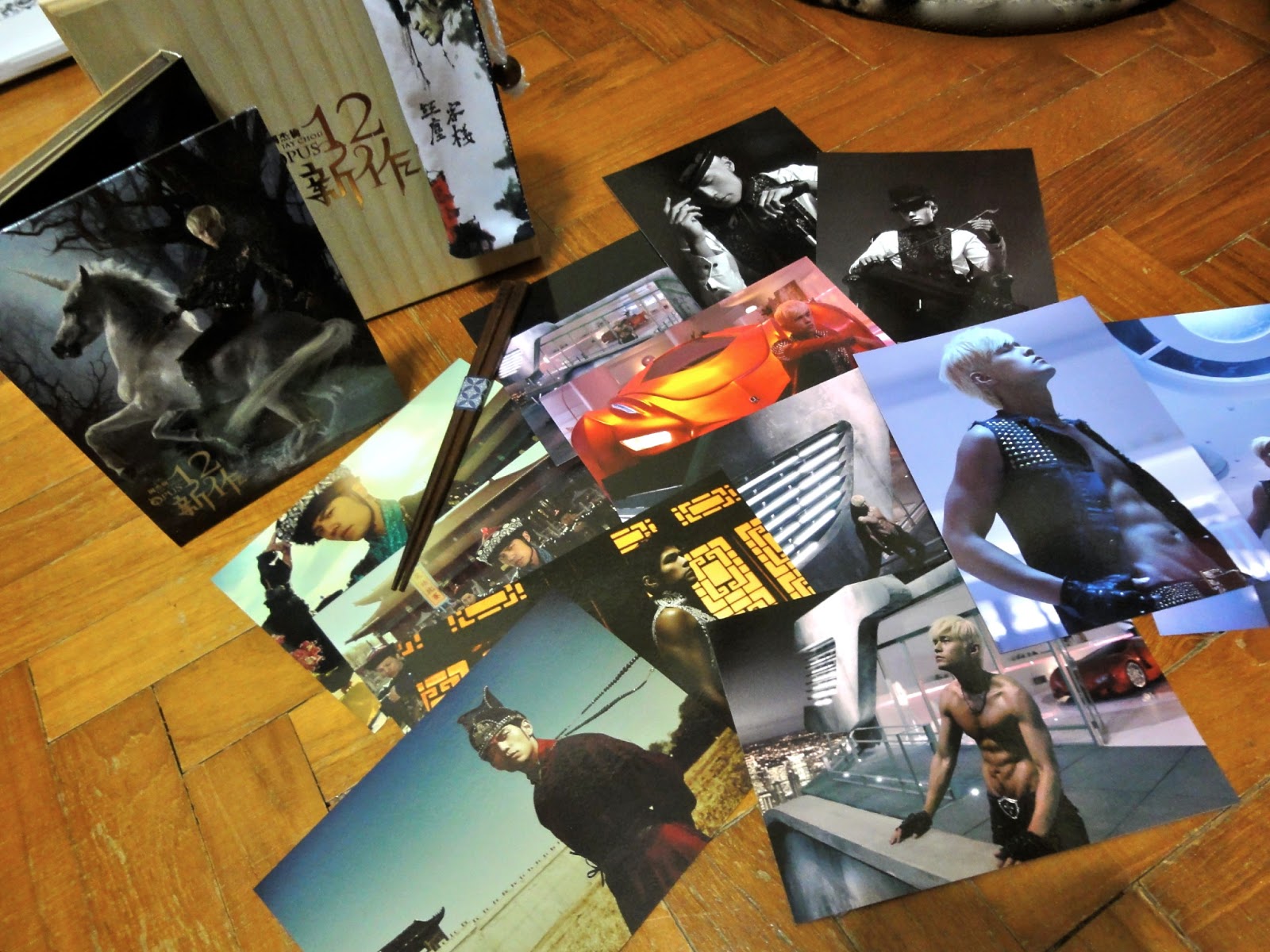 I caved in that day and bought the limited edition Opus which came with 12 poster cards (cue drool for hardcore Jay Chou fans), a DVD with 3 MVs, a pair of chopsticks and a special Jay chopsticks bag.  All for the grand price of $40.  Of course it includes the actual album…so I must say that I am quite pleased with the purchase although the chopsticks were a bit “hmmm….”

There are quite a few concerts happening within a short span of each other…we’ve got Mayday, GDragon….who else?  Gah…thank goodness I’m not huge fans of some of these acts.  Otherwise, I’ll be bankrupt.  Nonetheless, I’m looking forward to my next concert!!