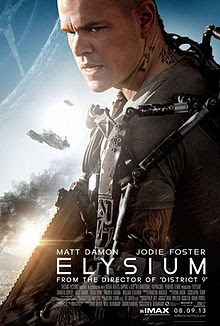 Matt Damon, Jodie Foster, Sci-Fi action flick…quite a no-brainer as to why I watched this movie in the first place.  In fact, I felt more compelled to watch this than ‘Pacific Rim’, although both are supposed to be on par in terms of visual effects.

So, I walked into the theatre only knowing the gist of the plot, which is – Earth is so polluted that the wealthiest of the world built a habitat in outer space where everyone is healthy and everyone has a med bed which cures all diseases.

Naturally, this film touches on the socio-political issues between the haves and have-nots.  Where the poor are forced to remain sick or are denied access to medical care, simply because they do not have the wealth to become a citizen of Elysium.

Enter Jodie Foster’s character, Jessica Delacourt, who is the Minister of Defence and also known as Class A b**ch in the movie.  She takes the hardline against illegal immigrants to Elysium and doesn’t bat an eyelid to using forceful methods and illegal agents on Earth.

Matt Damon plays Max De Costa, an orphan and an ex-con, who gets a lethal dosage of radiation during work one day.  Given only 5 days to live, he decides to go to Elysium at no matter what cost/price.

I’m not going to reveal any more because, it would then read like Wikipedia or a blow-by-blow account of the movie.  Overall, I felt that the movie was touching and rather entertaining.  However, the starting was a little long drawn and the director obviously has a penchant for showing blown up body parts.  Gross.  There’s not going to be any explanation on how these med beds were invented, how it is possible to create Elysium and science buffs will question how it is possible that Elysium has an atmosphere.  But yes, suspend all logical theories and just enjoy the fight scenes between the ‘good guys’ (ie. illegal but poor folks) and the ‘bad guys’ (ie. the government of Elysium plus that psycho agent).

Previous postThe Day the Pigeon Decided To Be Part of Mass Next postMovie Review – Mortal Instruments, City of Bones