The Day the Pigeon Decided To Be Part of Mass 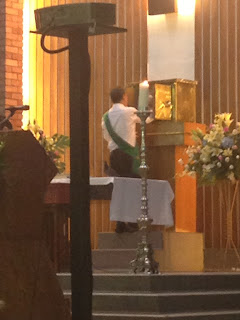 If you look very carefully, there’s a grey little pigeon on the altar, right where you can see the minister’s trousers. 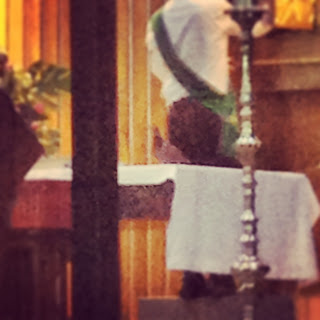 Not a very clear photo but it’s the best that I could do with my phone camera from the pew that I was sitting at.

This happened during Holy Communion, just before we sat on our pews, waiting to queue up for Holy Communion.  From the side of my eye, I saw something flashing towards the altar.  At first, I thought someone was running to the altar but I later saw that it was a pigeon!

The pigeon was happily perching on the altar, walked a few steps and even walked ONTO the Bible.  It stayed ON the Bible throughout the whole time that the congregation was queuing to receive Holy Communion.  It didn’t move from that corner, even when the minister went to keep the remaining communion wafers!  It only flew off onto the rostrum when the priest went back to the altar.

Funnily enough, it seemed to be very happy at the rostrum and I could see its head bobbing along.  The lector was very amused and was smiling to herself as she approached the rostrum to make the announcements.  It was only then that the pigeon decided that enough was enough and flew off to one of the air-conditioners.

Goodness knows when this bird flew into the church as the doors were all closed.  Hmm…religious bird?