I love the Singapore Zoo

I used to go to the zoo with my parents when I was a child and the last time I went there was at least 20 years ago.  With the reason of going to see the Giant Pandas in the River Safari, I decided to go to the Zoo as well since a 2-park-in-1 ticket was only S$39 (highly recommend you guys to buy this online and skip the queue).  The great thing about purchasing this online ticket is that you get the zoo tram ride included.  Otherwise, be prepared to fork out another S$5 for the tram ride…which is obviously overpriced.

As per my earlier post, Siew Mai and I had spent half the day at the River Safari before going off for lunch at one of the stores (worthy of a rant post…but I shall refrain from doing so).  Another recommendation: pack your lunch to the zoo.  There are several pavilions and a picnic area in the River Safari to enjoy a meal and there are plenty of benches in the main zoo to have your lunch.  Again, this is to skip the horrendous queues present at KFC/Ah Meng Cafe/ other restaurants/cafes.  Allows you more time to commune with nature too. 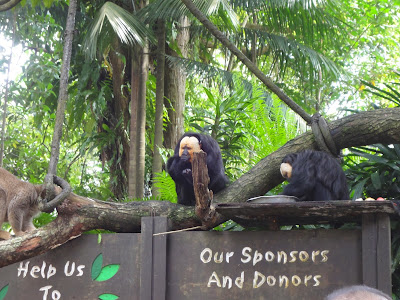 The Singapore Zoo is well known for their primates, many of whom are free roaming within the zoo.  If you enter the zoo at about 2pm, you’ll be right on time for one of their feeds, which explains the perched White Saki Monkeys chomping on bananas and a lemur (slightly hidden on the left).

The zoo is now divided into several sections based on country of origin as well as animal type.  Must sees include the white tiger and the polar bear, Inuka. 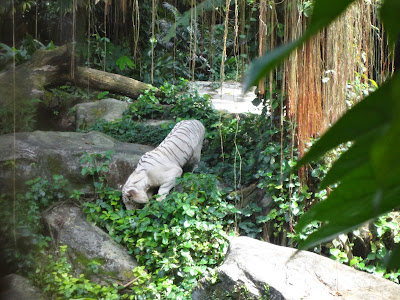 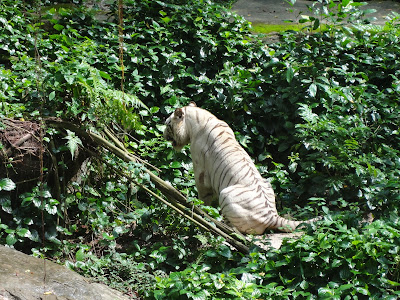 I love the white tigers and we were very lucky that we were in time to see their feeding…or actually, just them in the enclosure because the zoo is doing some work on the tiger enclosure and would shoo the animals back to their dens at 4pm. 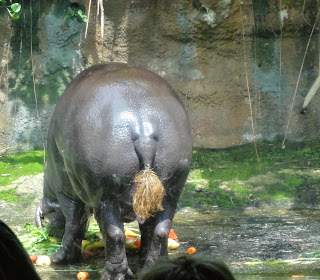 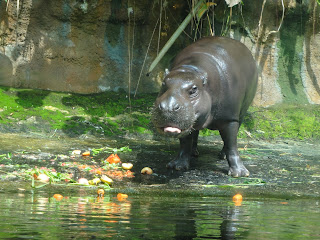 Above are Pygmy Hippos, so-called because they’re the smallest hippos in the world.  They’re 10 times smaller than your regular hippo but they’re just as messy eaters as their larger counterparts.  Their diet in the zoo looks pretty yummy – watermelon, cabbage, carrots and apples. 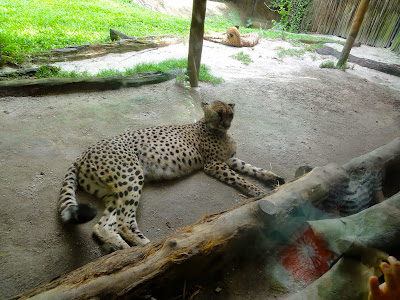 I love how this cheetah was just posing and gazing into everybody’s cameras.  I reckon it knows how beautiful it is. 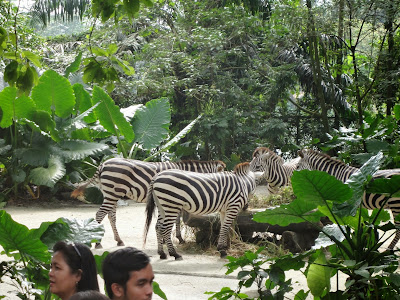 These zebras were eating non-stop from 3-6pm.  We knew this because we walked past them several times within those hours and their heads were all stuck in the food trough. 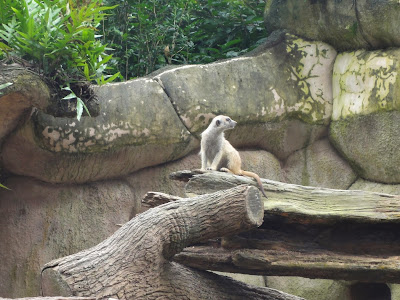 I was so thrilled to see meerkats! I find them so adorable and I’m always amused at how they like to sit and then stare off ahead, as if there is something fascinating.  Reminds me of this commercial in the UK too. 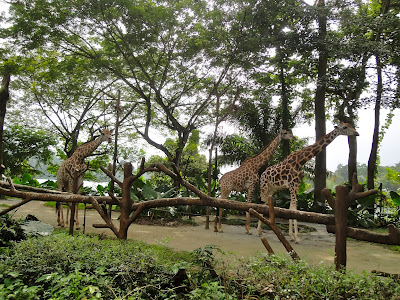 You can feed these giraffes at S$5 at 3.30pm (if I remember the time correctly).  Please bring exact change because the keepers do not have change. 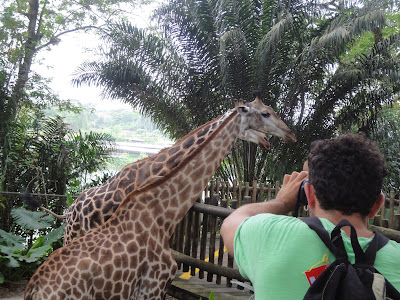 These giraffes were so desperate for food that it was really quite hilarious.  They’d stick out their long tongues to whoever was nearby with their plate of fruits.  One of them was quite the bully and would steal food that was meant for the others.  Sometimes, their desperation for the treats would result in them sticking out their tongues for quite a while and we could see the looonnng string of saliva.  Glad that I did not get any saliva on me. 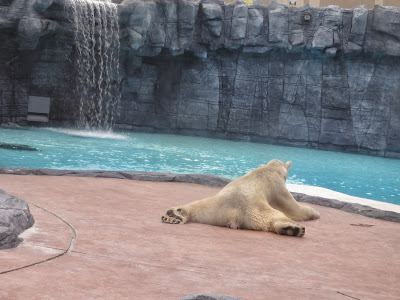 At 4pm is Inuka’s feeding time so we headed to his new enclosure and pool.  I remember his old one, which is approximately one-third of his current place. 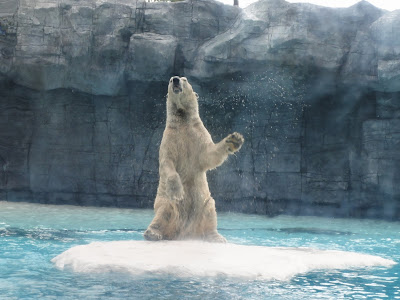 Inuka demands food.  He claps his paws to tell the keepers to keep them food coming. 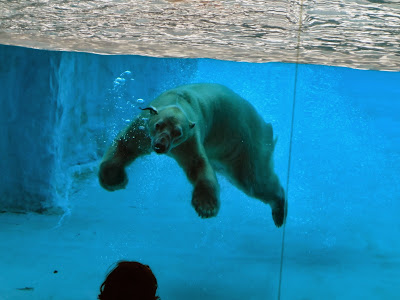 Naturally, when the fish gets thrown into the pool, he has to dive for it.  He’s quite an adorable bear and I think he ought to have a partner, especially since his mum passed away.  So proud of our first polar bear ever born in the tropics.  Don’t feel sorry for him because he has already acclimatised to the weather AND you’d be surprised to know that summer in the Arctic can reach 35 deg C sometimes! 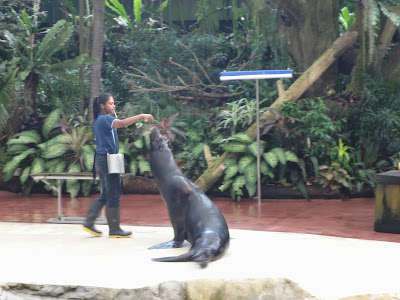 Do make time for the Splash show featuring the adorable and intelligent sea lion.  They were not kidding when they called this the SPLASH show.  If you want to stay dry, sit from row 4 onwards.

I have tons of other photos of other animals but I shan’t bore you with them.  These are just some highlights that I feel you must see in the zoo.  Although the zoo allows visitors to continue their viewing slightly after 6pm, it’s really best to try and see all the animals before then.  Why? Because animals that have dens to sleep in, besides their enclosures, will be ushered to their dens at 6pm.  In other words, you won’t be able to see them.  If you don’t mind looking at sleeping animals, then visit the zoo in the afternoon like what I’ve done.  Otherwise, you might want to go in as early as 9am just to catch the morning feeds and to see the animals when they’re a little more active.  Remember: afternoon=siesta time.  Of course, to see the animals really awake, go to the Night Safari.

Don’t be ambitious and try to do 3 parks in a day.  Your feet will die of exhaustion.  Singapore’s really humid too so you’ll be sweaty and stinky the whole entire day.  The pass allows you to visit the parks at any time within 30-days of the visit date that you’ve entered in the ticketing system.

In all, I had tons of fun being a kid again and looking at all these animals while learning about conservation, environmental issues as well as facts about the animals.  While looking at them, I can’t help but also think that being a zoo animal is really a good life.  I really don’t mind being one.  LOL.

Previous postMorning Adventure At River Safari Next postGoals for 2014