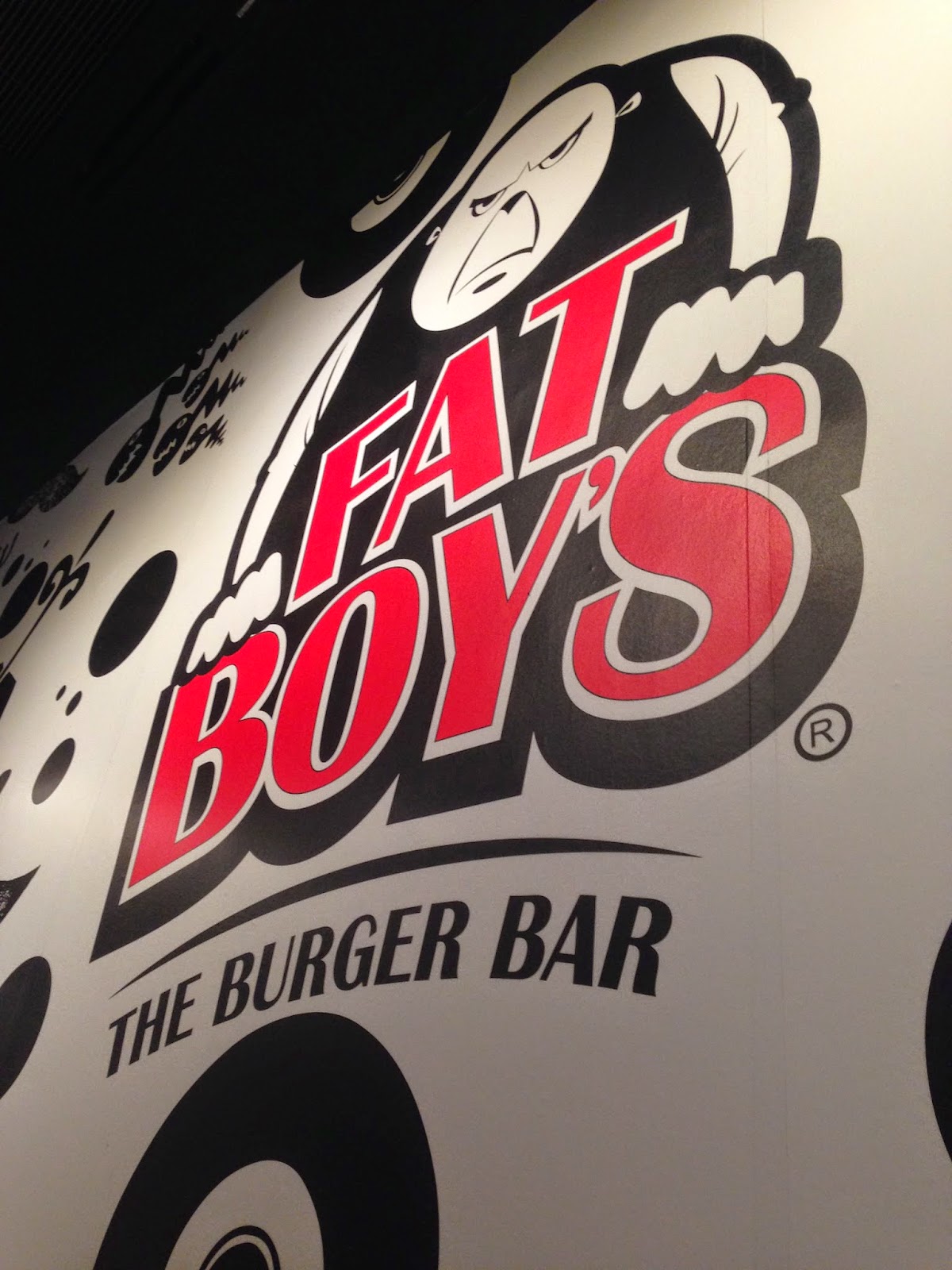 With a name like “Fat Boy’s”, you know that you need to keep your trip to this joint a secret from your cardiologist. Just as the name suggests, chuck out your diet and just enjoy a burger. If burger isn’t your thing, there are other ‘healthier’ options such as salads (expect the meat toppings) and some other mains such as salmon and chicken and waffles (was sold out when I went). 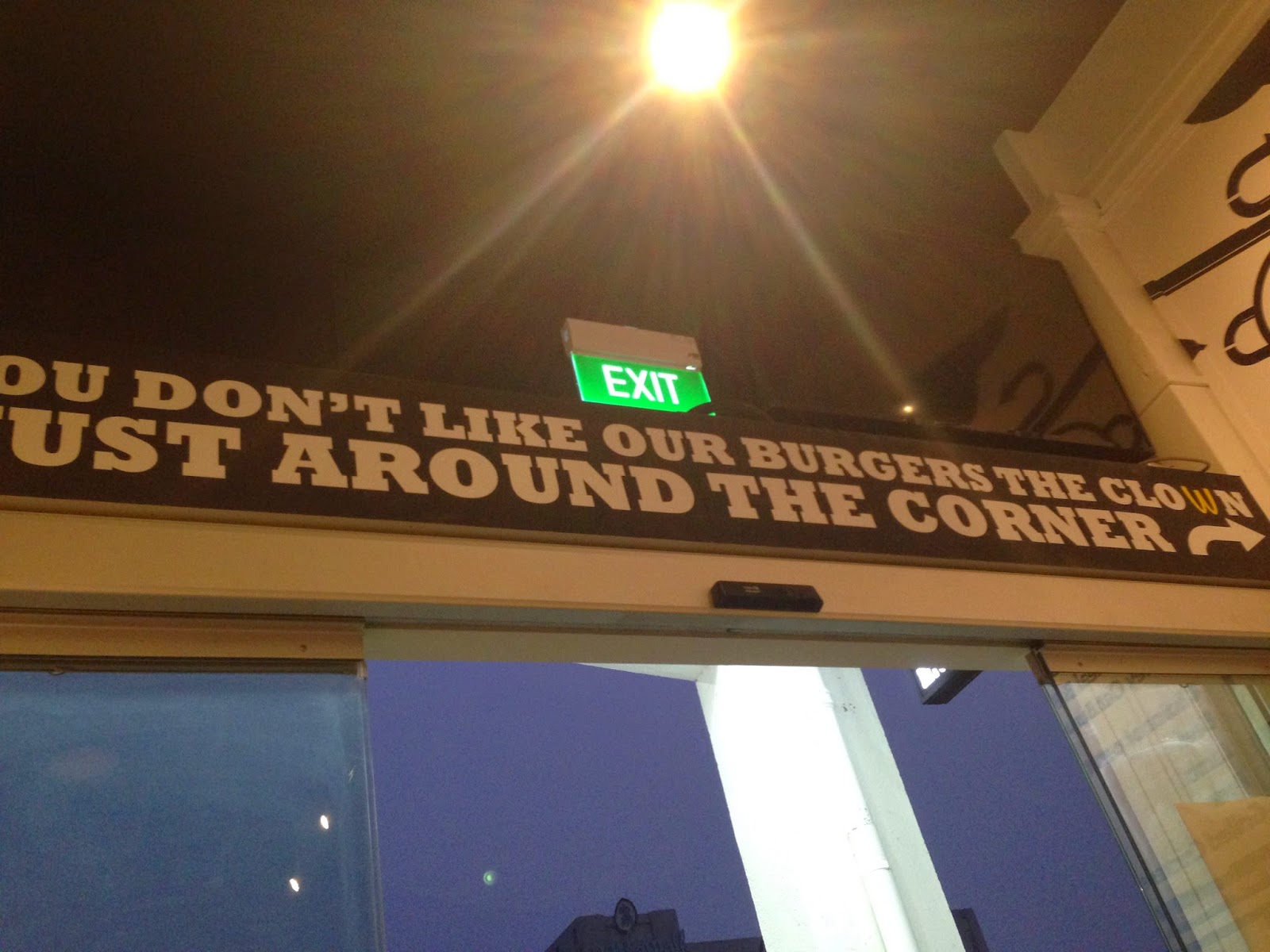 I love the sense of humour that surrounds the whole place. The sentence above the exit reads, “If you don’t like our burgers, the clown is just around the corner”. On a wall, there was the phrase “Fries are vegetables” too! They had a very tongue-in-cheek sign at the window which played on typography and in huge upper case lettering, you would’ve read it as “Naked Girls Work Here” but it’s only when you’re right in front of the sign would you see the smaller print which were talking about their naked burgers or something along those lines. Hilarious! 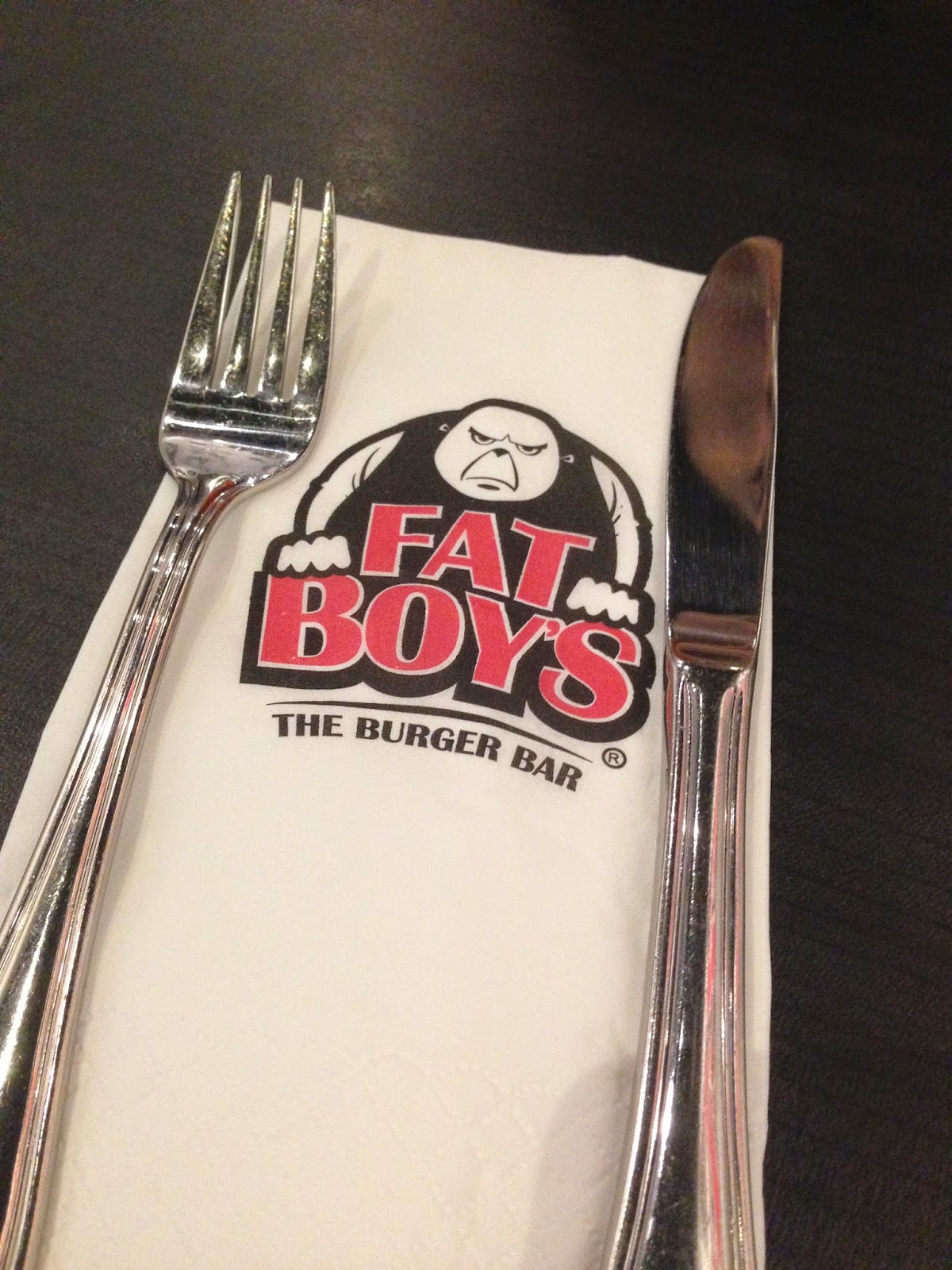 “Fat Boy’s – The Burger Bar” was opened by the brothers Kennie and Bernie Tay in 2009 and their first outlet was in Katong. It has now expanded to Malaysia and even China! I went to their less well-known (it’s not even listed on their website) in MacDonald House, located next to Plaza Singapura. The decor of this branch is laid back and in the typical black, white and red colour scheme. Reminded me a lot like an American diner and the pop songs from the 1960’s – 1970’s playing in the background certainly played a part in it. 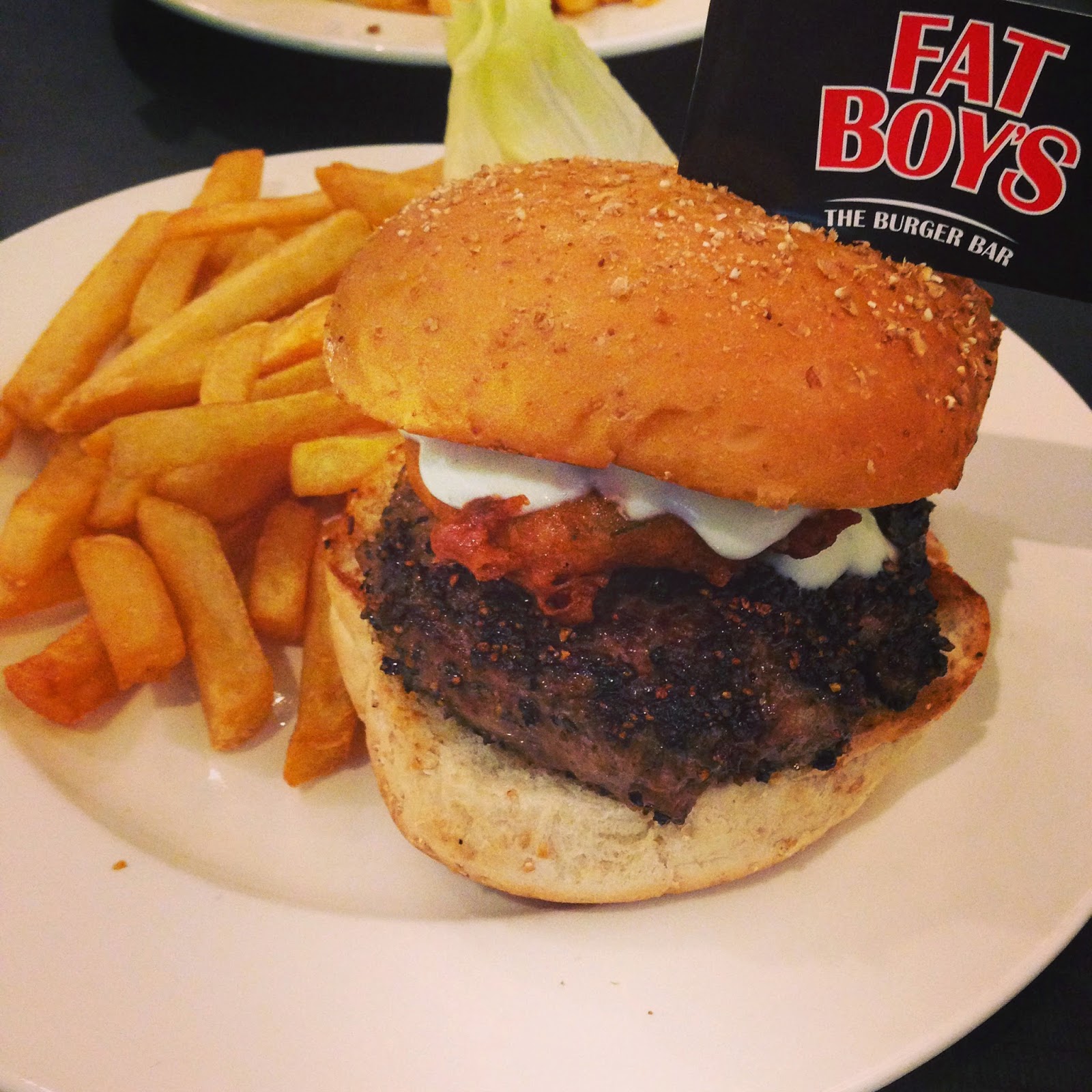 I ordered the Bleu Peppercorn burger (S$11.50+) and it’s a beef patty coated with crushed peppercorns with a fried onion ring topped with blue cheese sauce between a wholemeal bun. I must say that it’s simple but yet really satisfying. I loved that the distinctive taste of the blue cheese was not overpowering but helped add flavour to the burger. I like thick fries so the fries here were of a nice thickness although I couldn’t help but think that they need to fry them a little less because they were strangely not very fluffy when you bit into the centres. 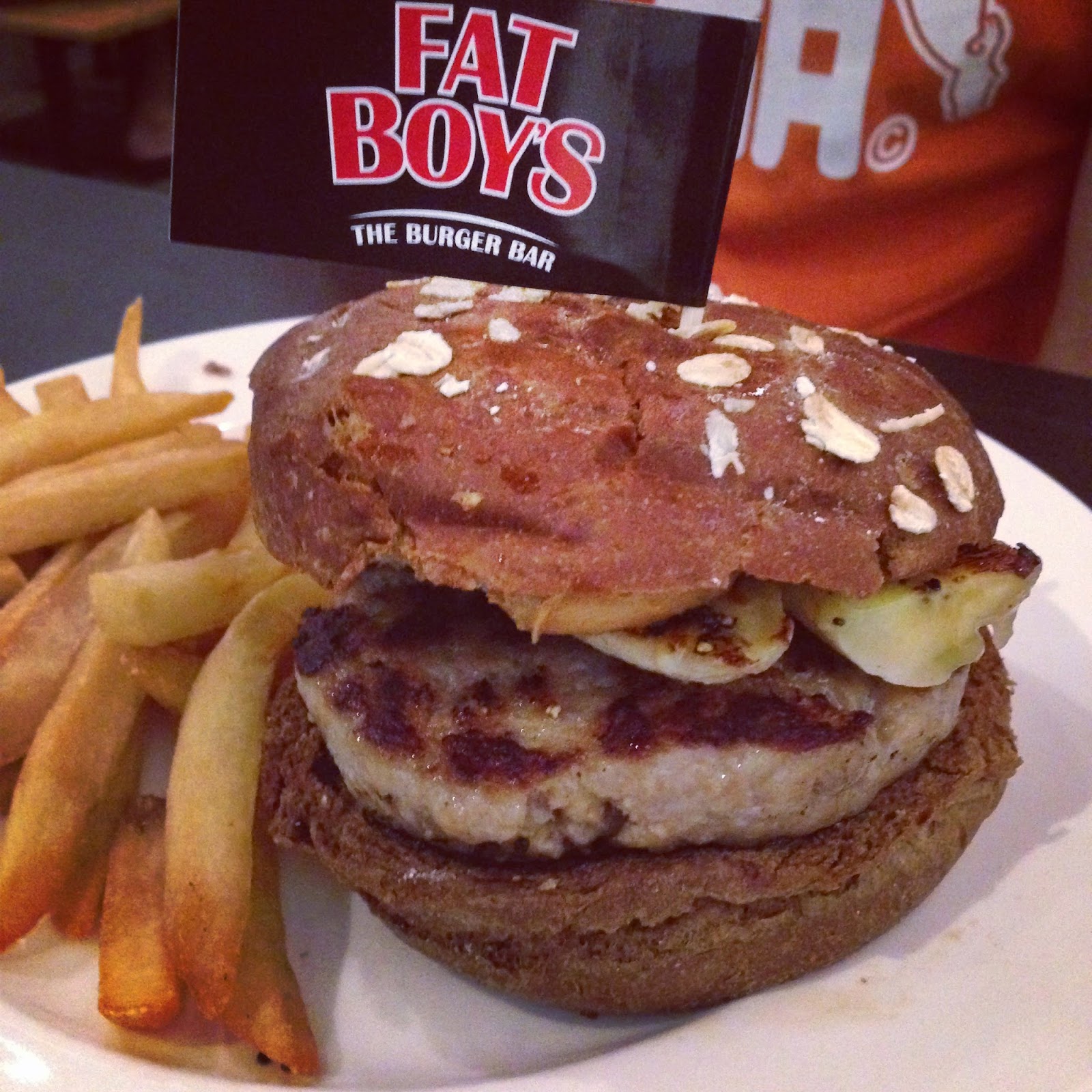 My friend ordered the Elvis (S$10.50+) which is so-called because of the King’s love of peanut butter sandwich with banana. Thus, this burger is a bacon stuffed pork patty topped with a browned banana and peanut butter spread. Verdict from my friend – interesting, in a good way. He described each bite as a mix between savoury and sweet, where each ingredient had its distinctive taste. Individually, the peanut butter was really good. Would he eat it again? He said that he would. As for myself, I think I’d rather take a bite off his plate and let him have the rest of the burger. 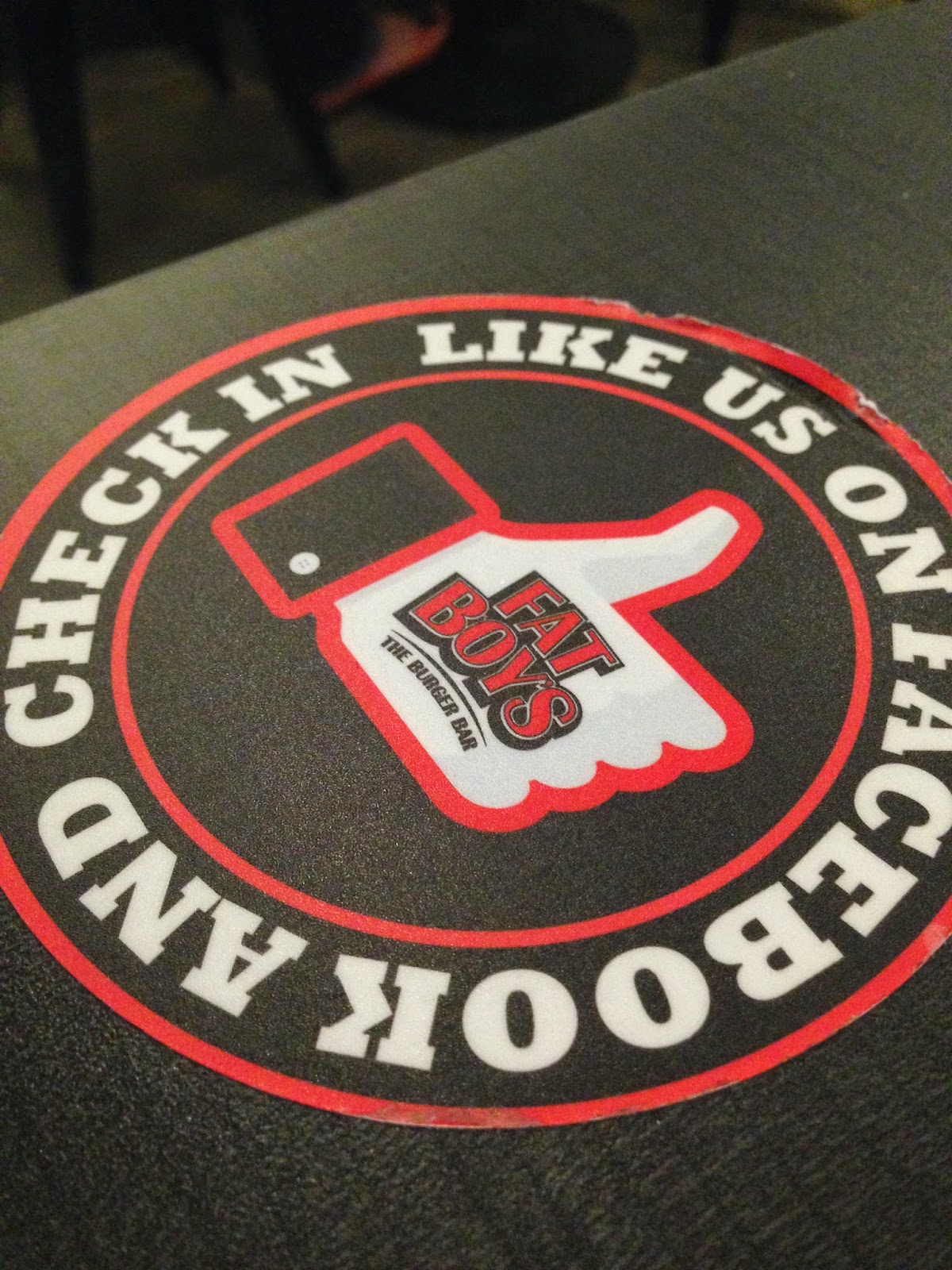 There were a lot of other interesting types of burgers, one that I remember off their menu being the Mahalo burger and it’s Hawaiian-themed (surprise, surprise) and it has a grilled pineapple ring in it. If you aren’t in the mood for any of the burgers on their menu, build your own! There are 4 types of patties, 25 types of toppings, 11 sauces and 4 types of buns for you to choose from. Fat Boy’s have done their calculations and that’s 4,400 combinations to try every permutation of patty/sauce/topping.

All in all, I think that the prices of their burgers are quite reasonable considering the quality and when you compare it to Carl’s Jr. It isn’t pretentious and just like that sign above the exit, if you don’t like it…you can go to *censored company name*.

They have outlets in the following cities:
Singapore
Kuala Lumpur
Johor Bahru
Beijing

To find the nearest branch near you, do check out their website www.fatboys.sg. That said, do note that the outlet that I went to is NOT listed on their website. If you noticed, I only put 1 plus sign after the prices above as Fat Boy’s does not charge the 10% service charge but only the 7% GST.