My Birthday Dinner @ The Clan Restaurant 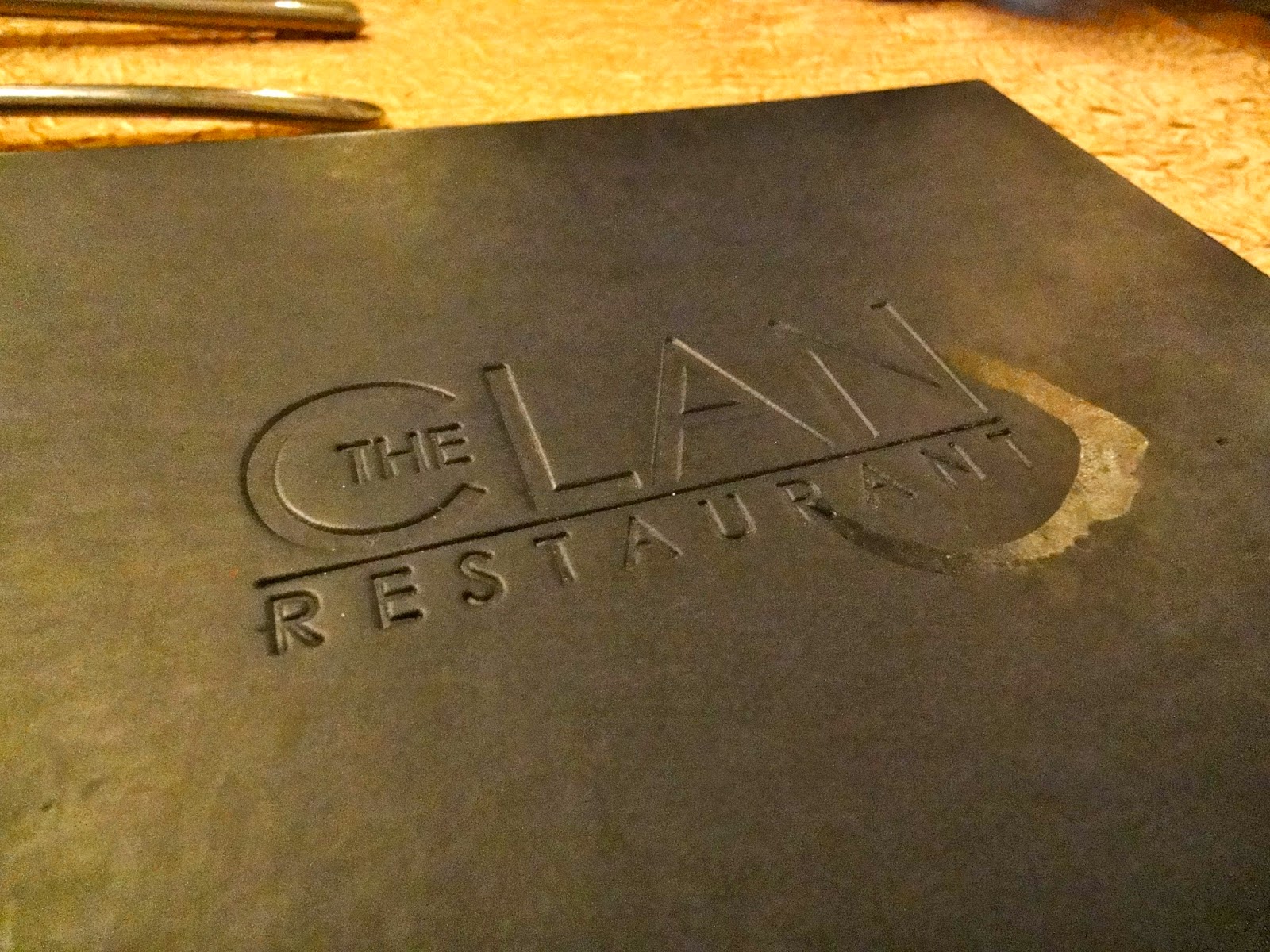 I searched online for quite some time and read tons of reviews before choosing to celebrate my birthday with my family at The Clan Restaurant, located at the quiet Bukit Pasoh. +ladyironchef rated it as one of the top places to bring your date without breaking your wallet and thus, I thought that this would be the perfect place to not spend an exorbitant amount of money while still enjoying fine dining. 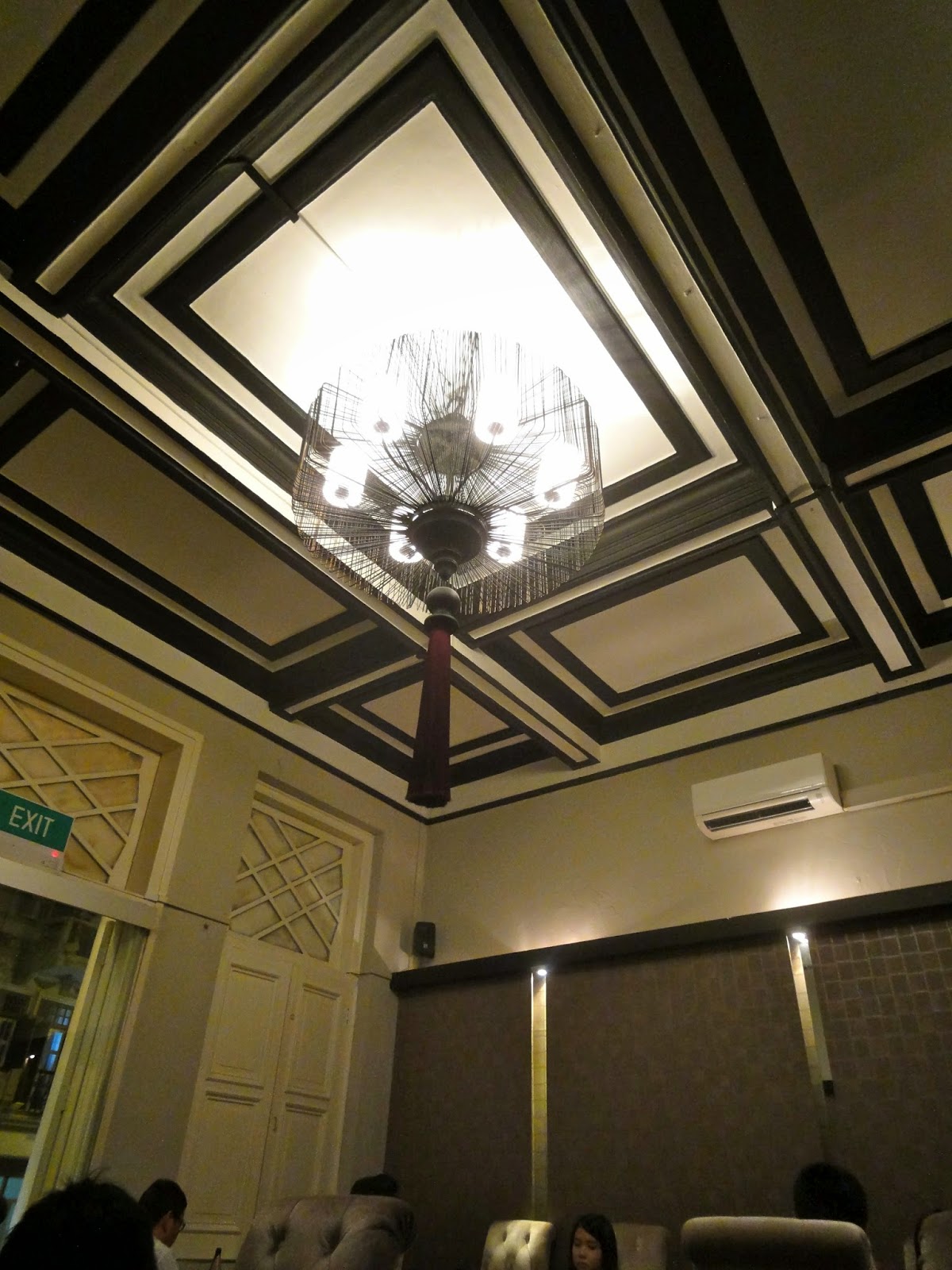 Nestled within the CBD but yet is in an area rich in heritage, The Clan’s decor is modern Asian Chic with the monochrome colours of black, white and greys. The restaurant has a cosy atmosphere and it’s nice to know that we were dining in a building that is over a hundred years old.

The glass window facing the street is often mistaken as the entrance and that is why the restaurant has placed a velvet rope in front of it. The entrance is just on the right, through a nondescript door.

There is no such thing as ala carte orders at “The Clan”…unlike what is mentioned on their website. We could only choose what item per course you prefer in their set meals. For our 6-course dinner, it was S$64.90++ and do note that this price is subject to variation because they may amend certain items on the menu. 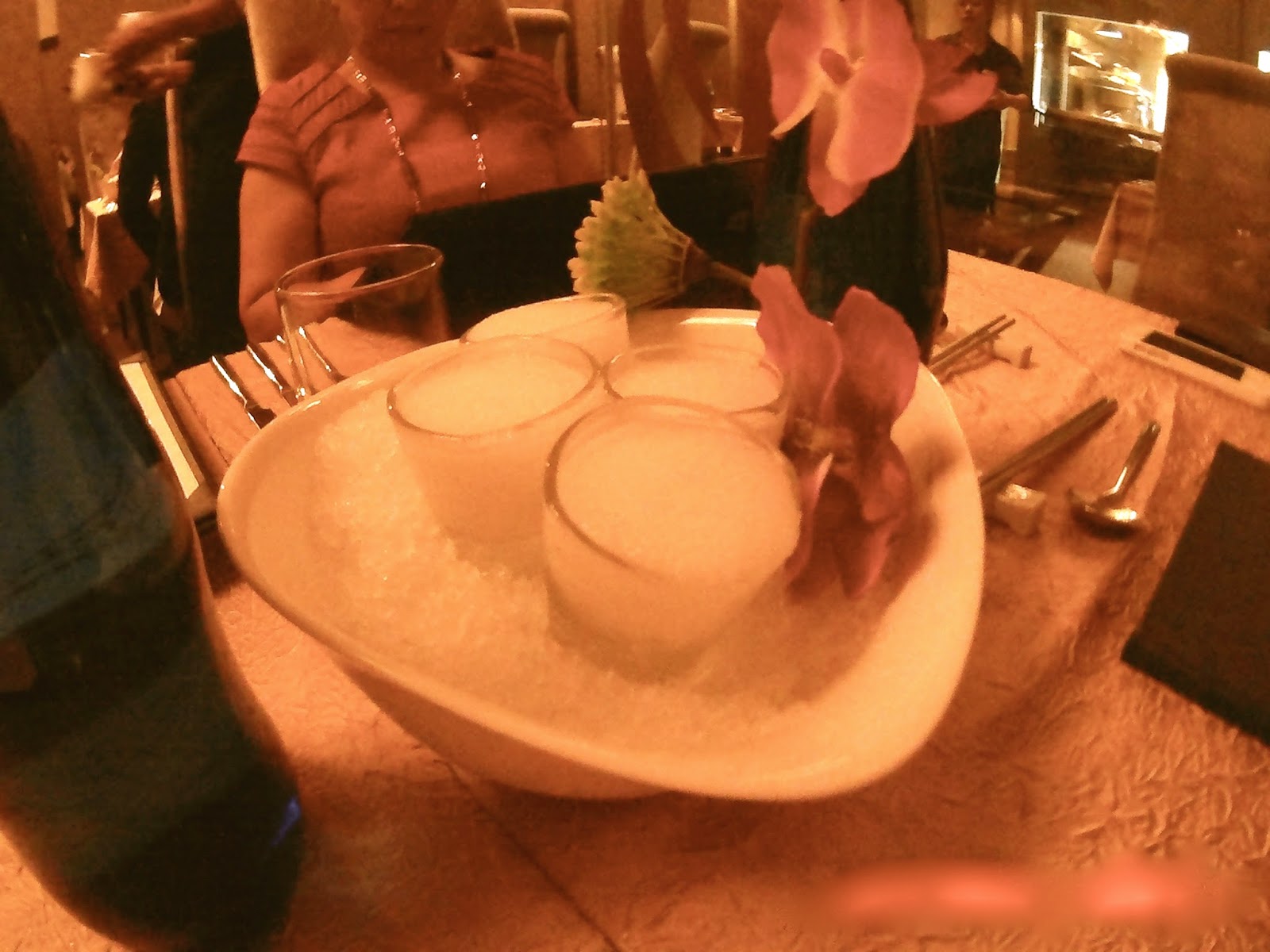 We were first treated to a starter of Lime Sorbet, which was very tasty but my bro and I felt that serving this right at the start was a little weird because normally, lime sorbet is served as a palette cleanser but we had yet to eat anything. Anyway, here goes the 6-course meal: 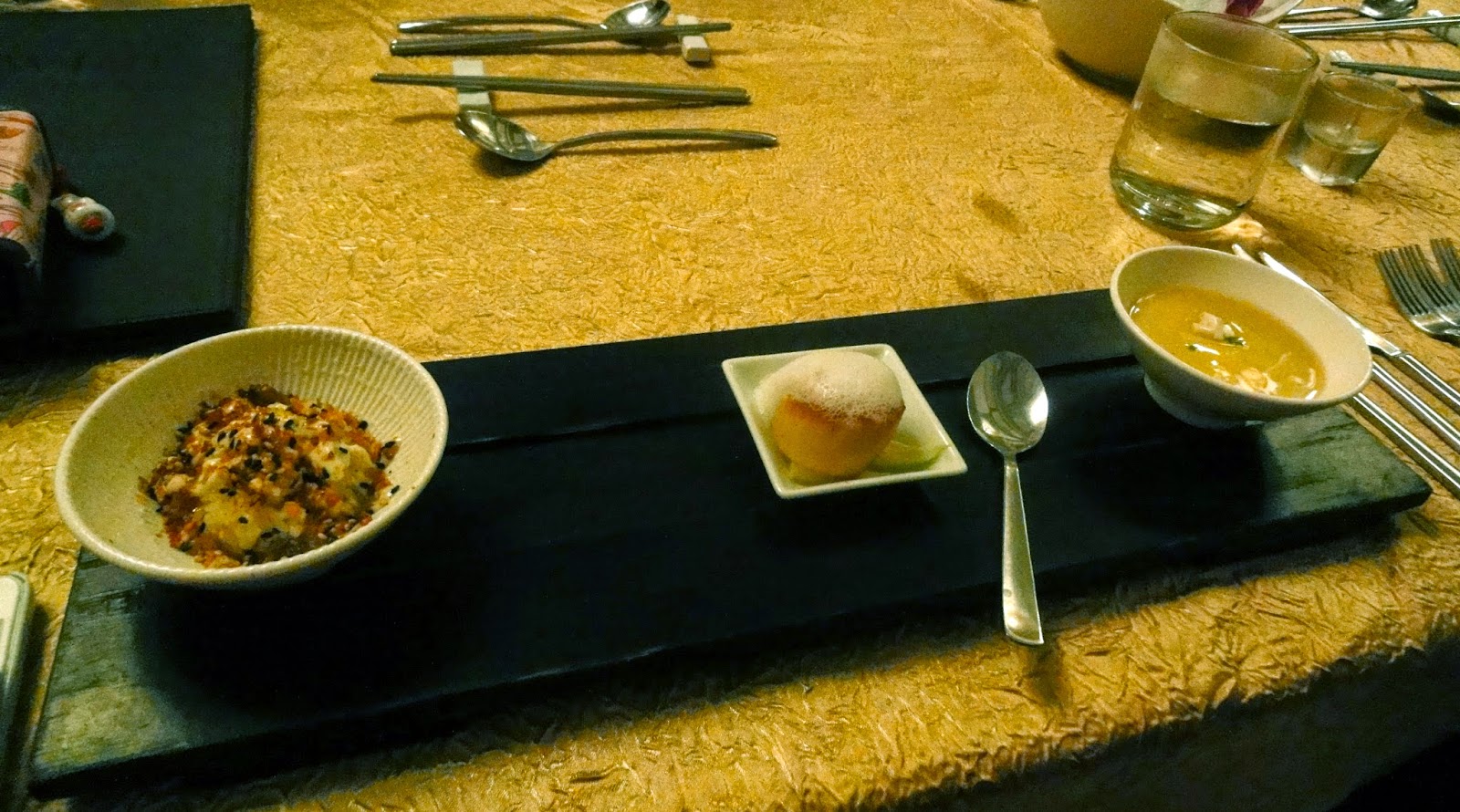 One – Chef’s Appetiser
Similar to an amuse bouche, this is the chef’s starter for the day. For this meal, we had (from left to right) prawn sushi, seared scallop with truffle foam and foie gras chawamushi. The waiter suggested that we start with the scallop, followed by the chawanmushi and lastly, the prawn sushi. 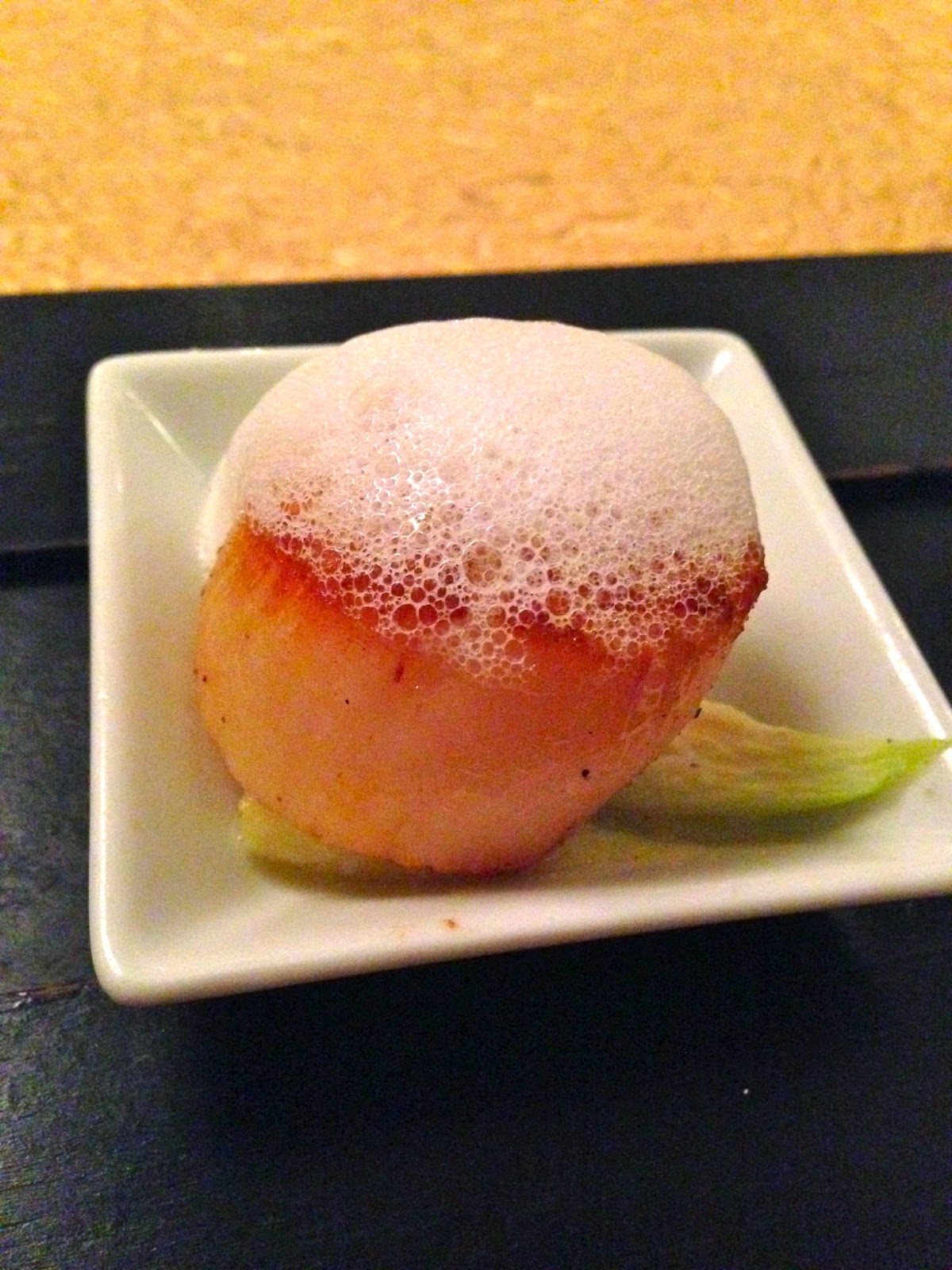 The seared scallop was very good although I felt that the truffle foam was a little pretentious. Nonetheless, I love scallops and I love truffle. Combining these 2 together made sense. 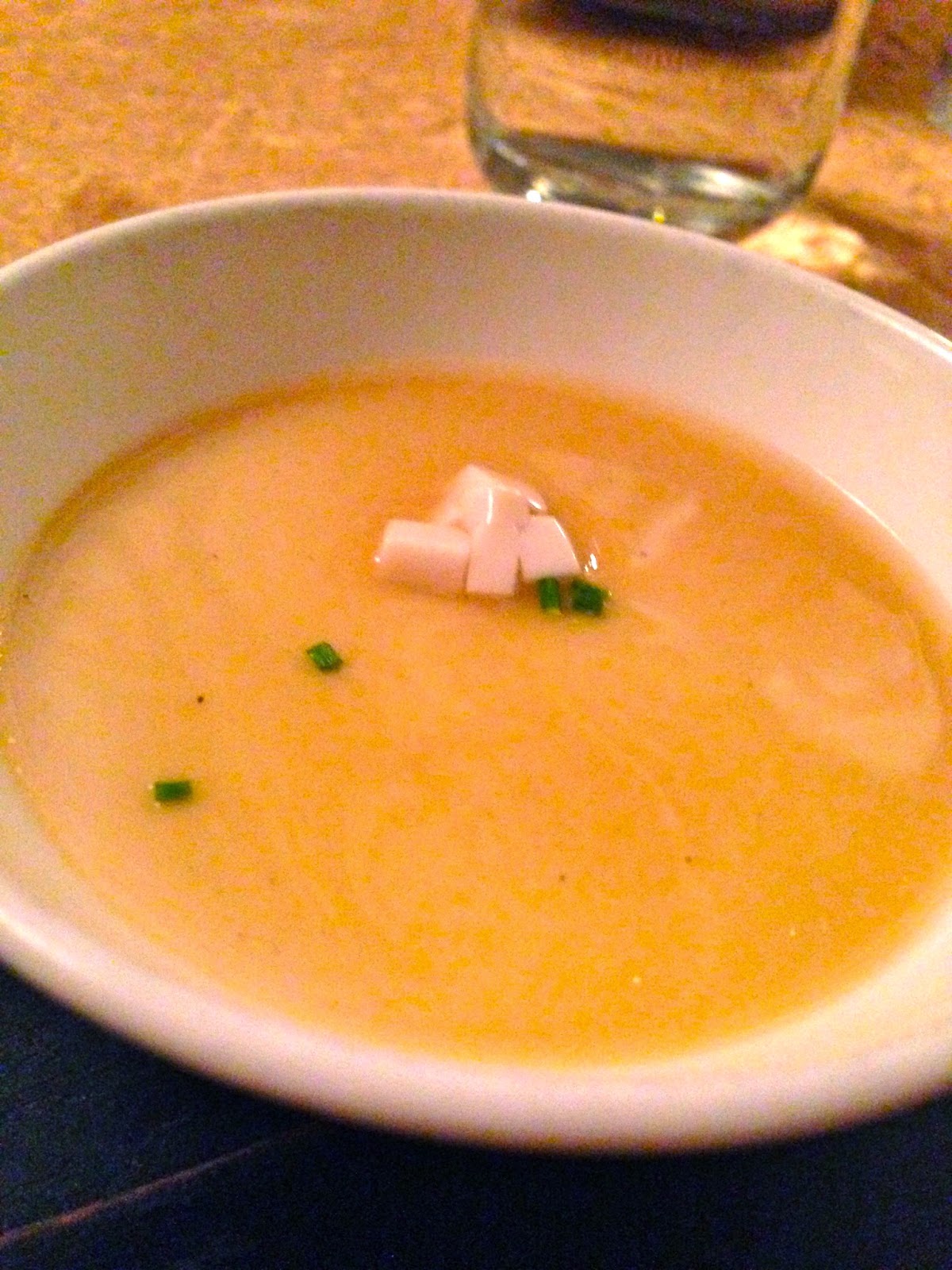 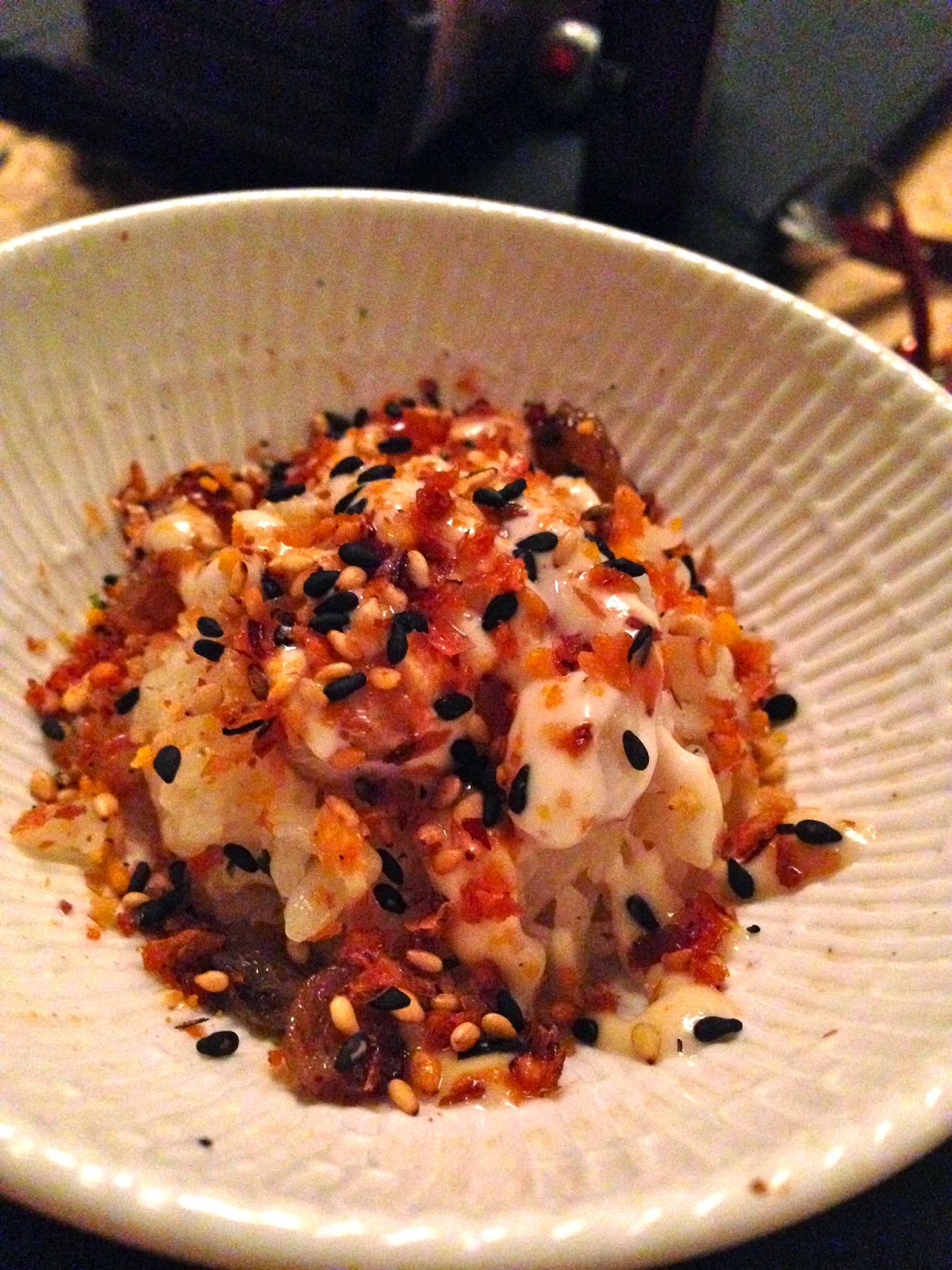 This is a deconstructed prawn sushi as the rice was in a ball with the prawn (I’m not even sure if it was a whole prawn) on top of it and drizzled with a bit of mayonnaise and tons of sesame seed and dried bonito shrimp. I wasn’t too crazy about this. 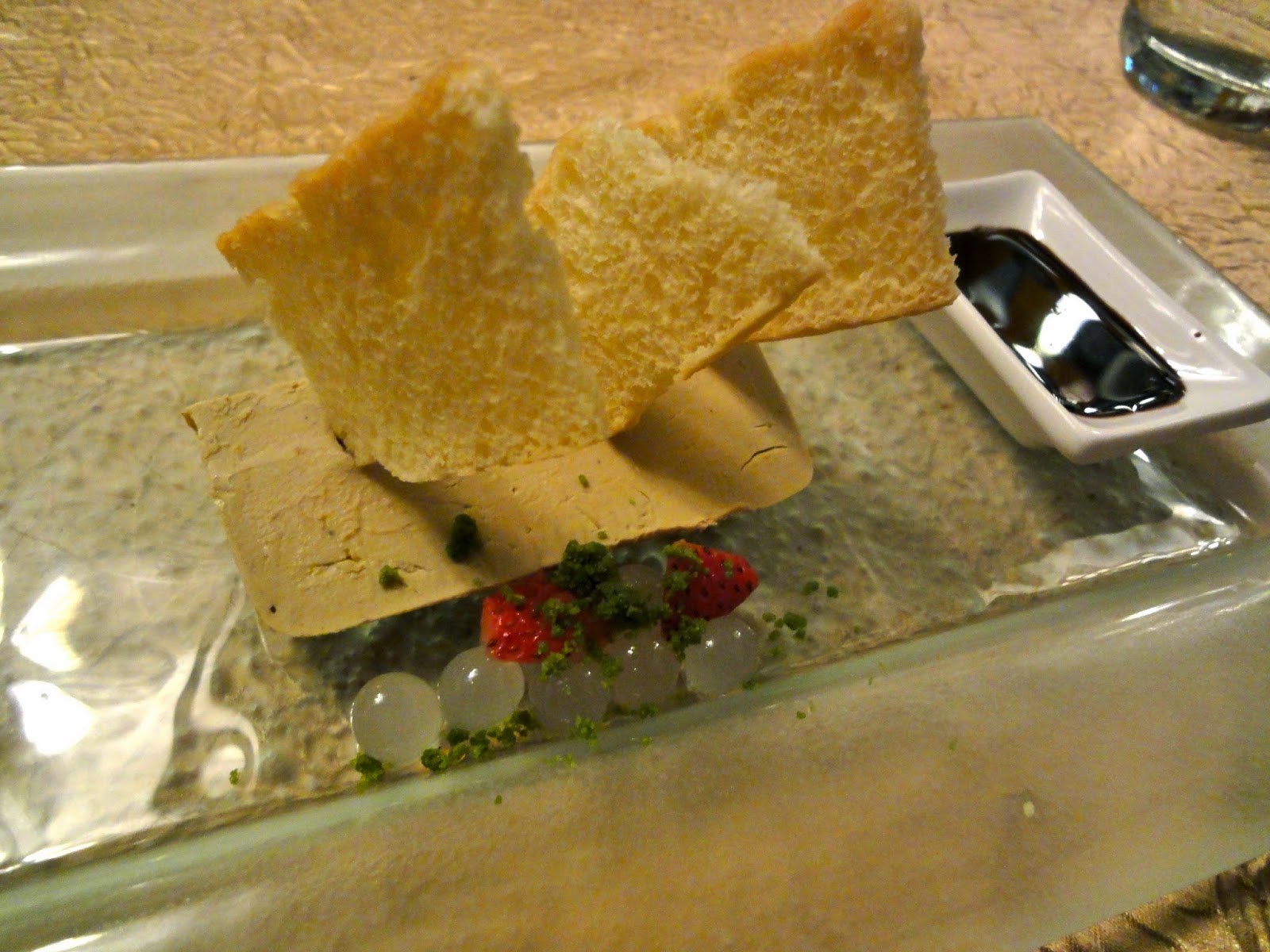 Two – Cold Dish
I ordered the Foie Gras Terrine with Foccacia & Lychee Crumbs. I was expecting lychee fruit but the ‘crumbs’ are actually little balls filled with lychee juice. Again, I was not very impressed as the foie gras terrine could’ve been easily passed off as a simple pate although it was a little milder in taste than one. That said, the lychee went extremely well with the terrine. 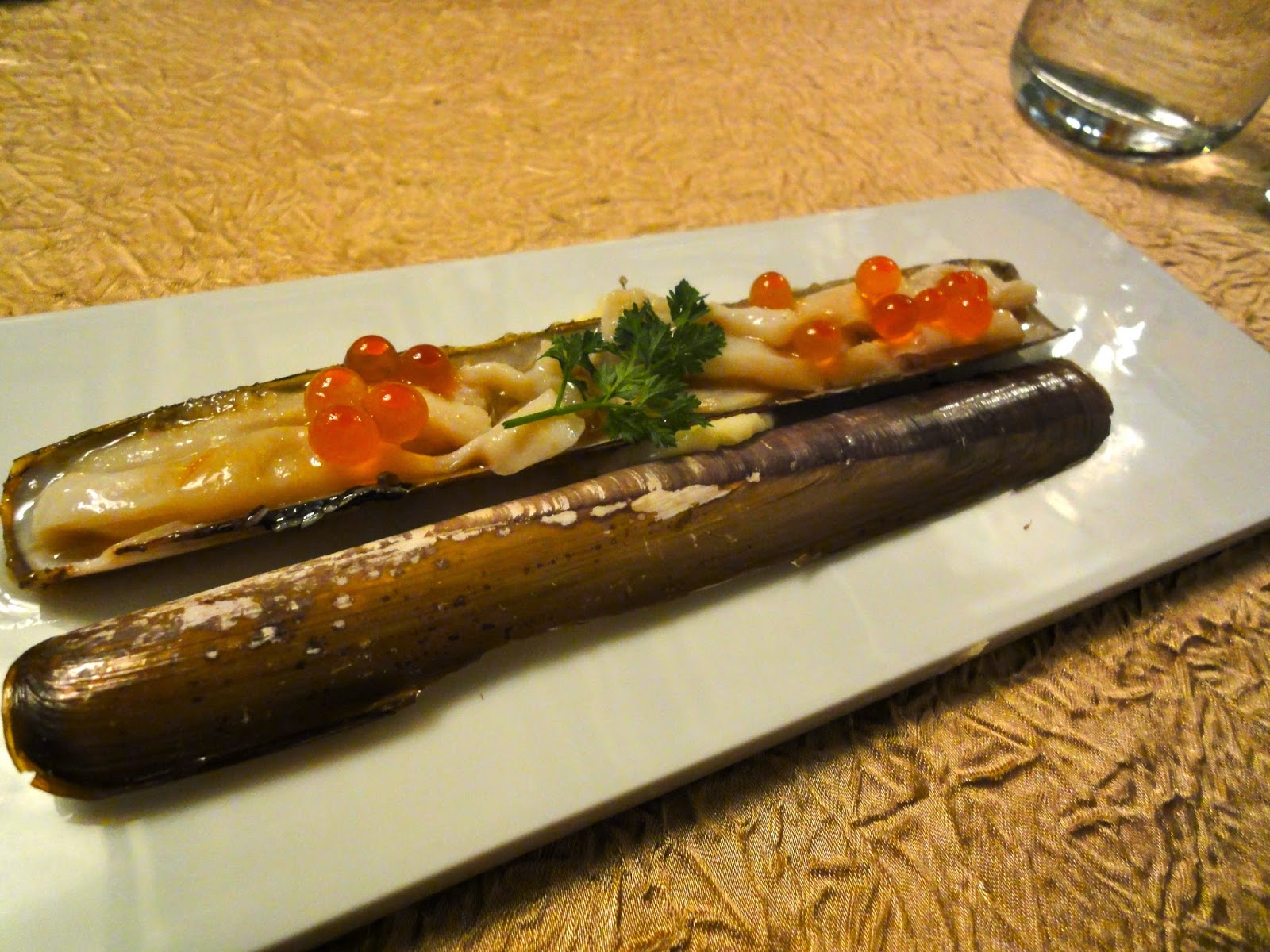 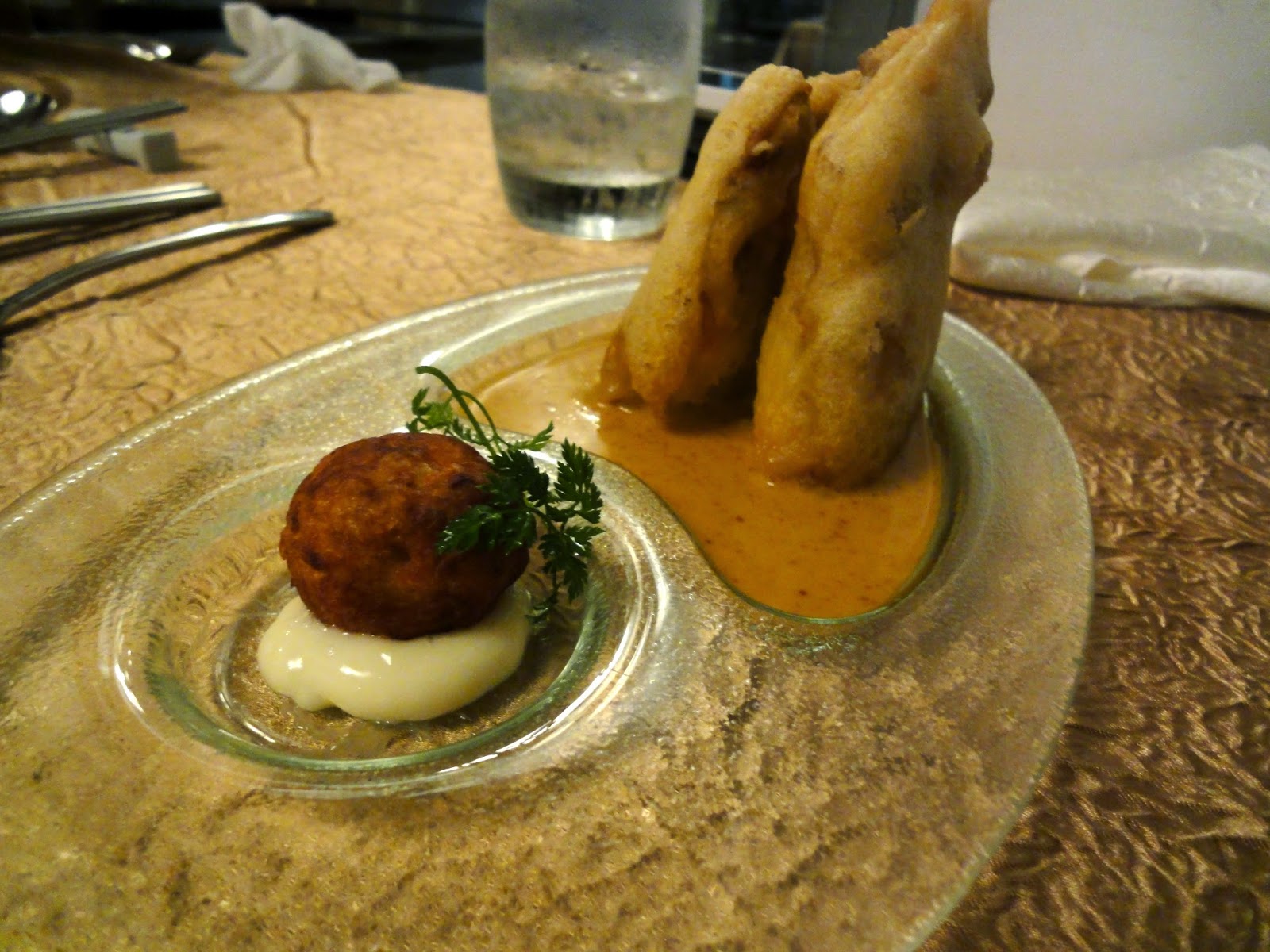 Three – Side Dish
I ordered the Steamed Razor Clam with Salmon Roe in Japanese Sauce (top) while my bro ordered the Tempura Soft Shell Crab with Homemade Citrus Sauce (below). I really liked the razor clam as it was delicate and steamed perfectly. With regards to my bro’s side dish, I was impressed that they gave the whole soft shell but there was a little too much batter. I was a bit puzzled by the ball at the side and we concluded that it tastes exactly like takoyaki. 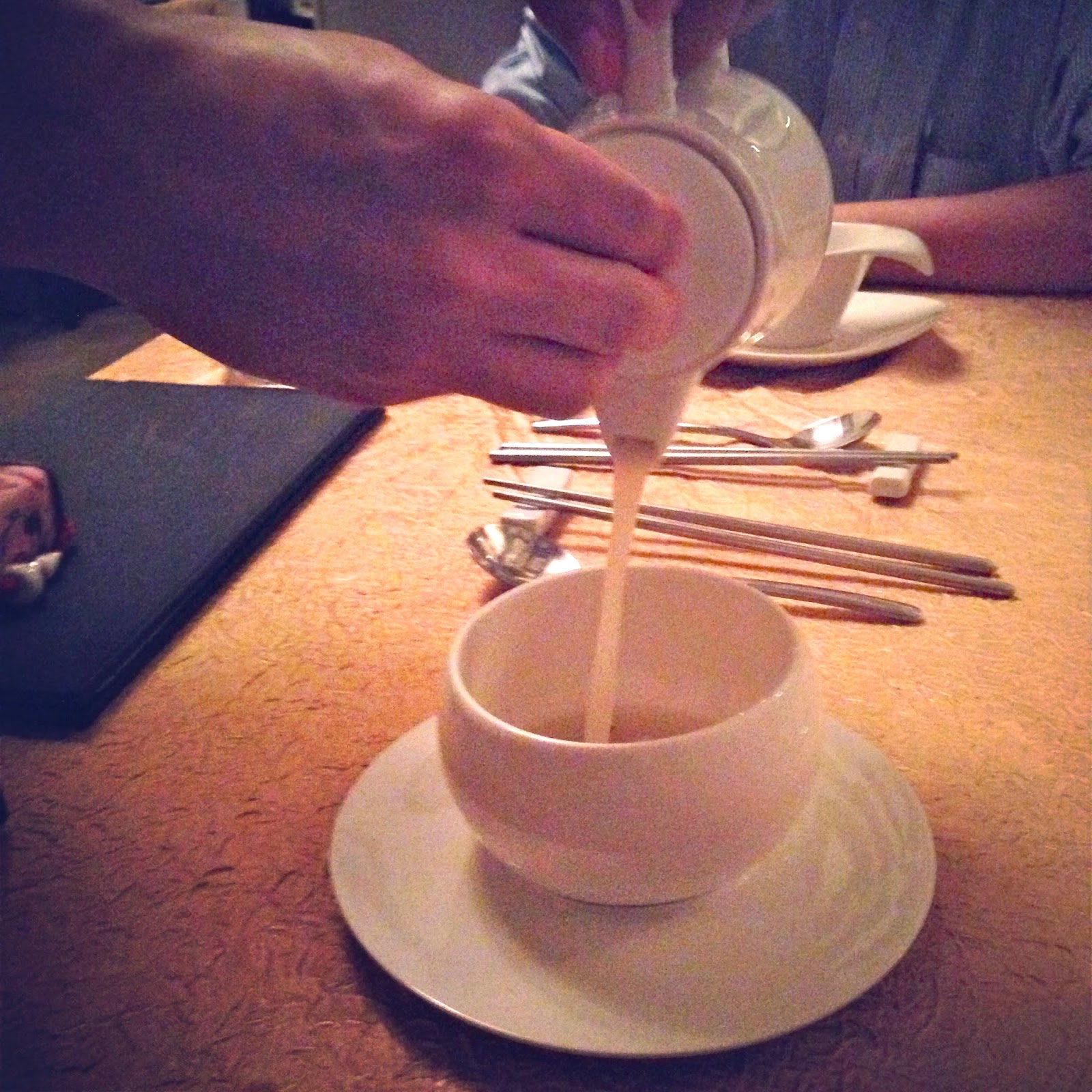 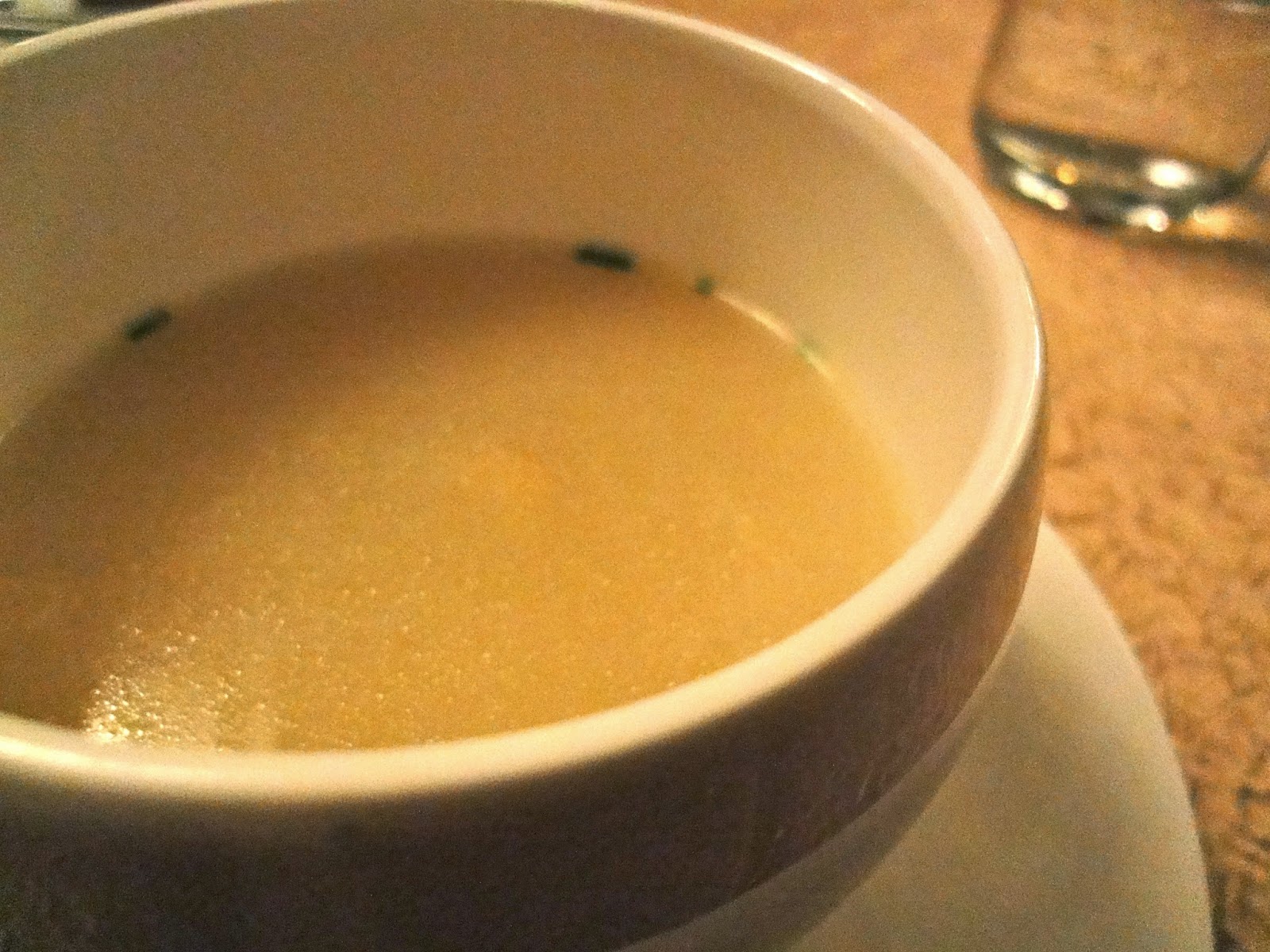 Four – Soup
Opting for something a little light, I went for the Ginseng Chicken Consomme which was delightfully poured into a bowl at the table. The clear broth was rich with chicken flavour but sadly lacking in ginseng. Maybe I enjoy herbal soups too much.

Dad had the Seafood Soup which reminded all of us of Lobster Bisque. A slightly more watered down and non-creamy lobster bisque. 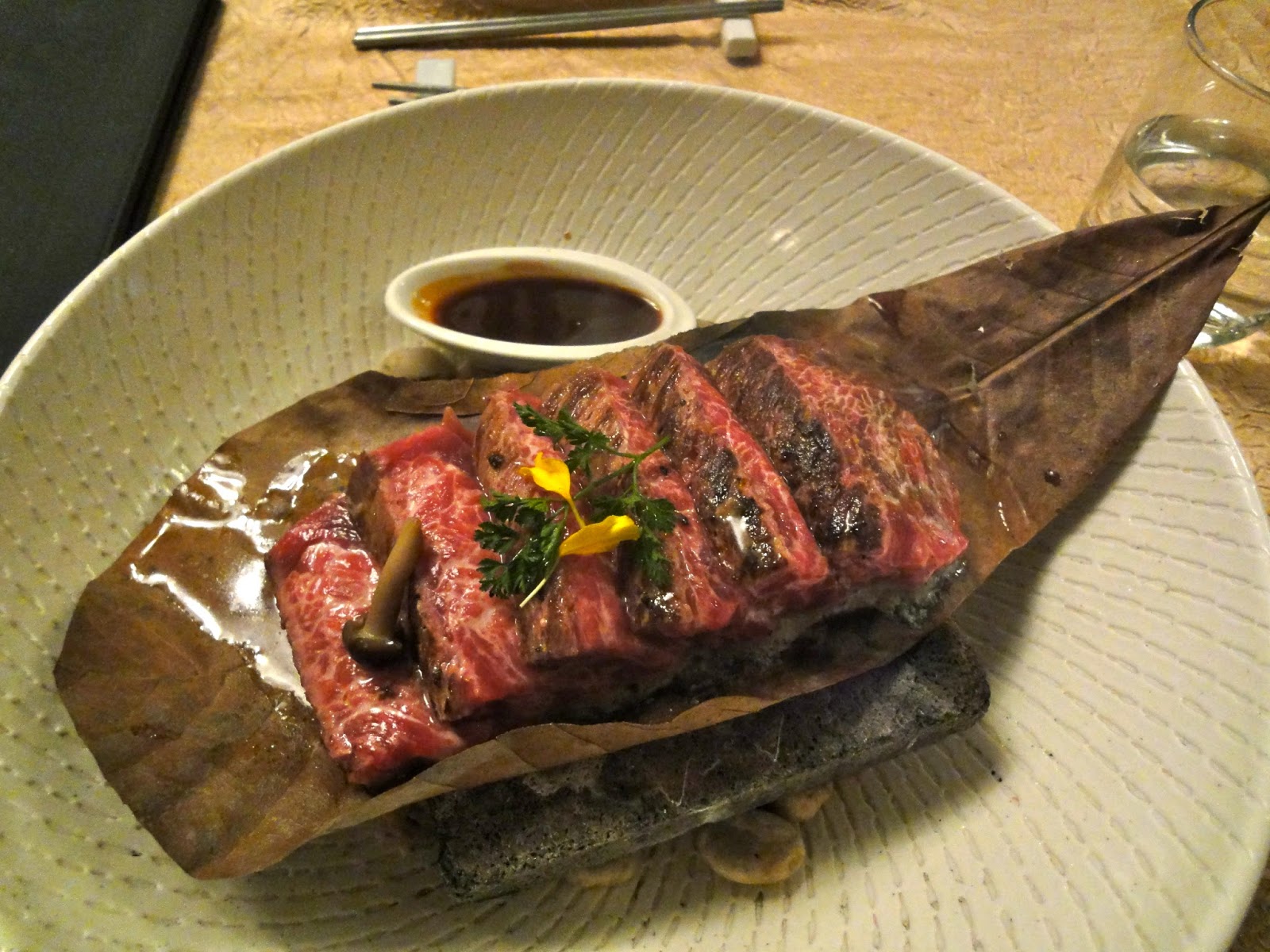 Five – Mains
The lady at the table beside us ordered the beef when we arrived at the restaurant and thus, I was influenced to order the same thing – the Prime Beef Short Ribs on Hoba Leaf with Peppercorns and served on a lava stone. I ended up smelling like barbequed beef but honestly, this was worth it. The beef was really tender and you choose your beef’s doneness by shifting it along the hot stone. However, the Hoba leaf was slightly burnt by the stone and stuck to the beef as well but a little extra cellulose (albeit burnt ones) is still alright. 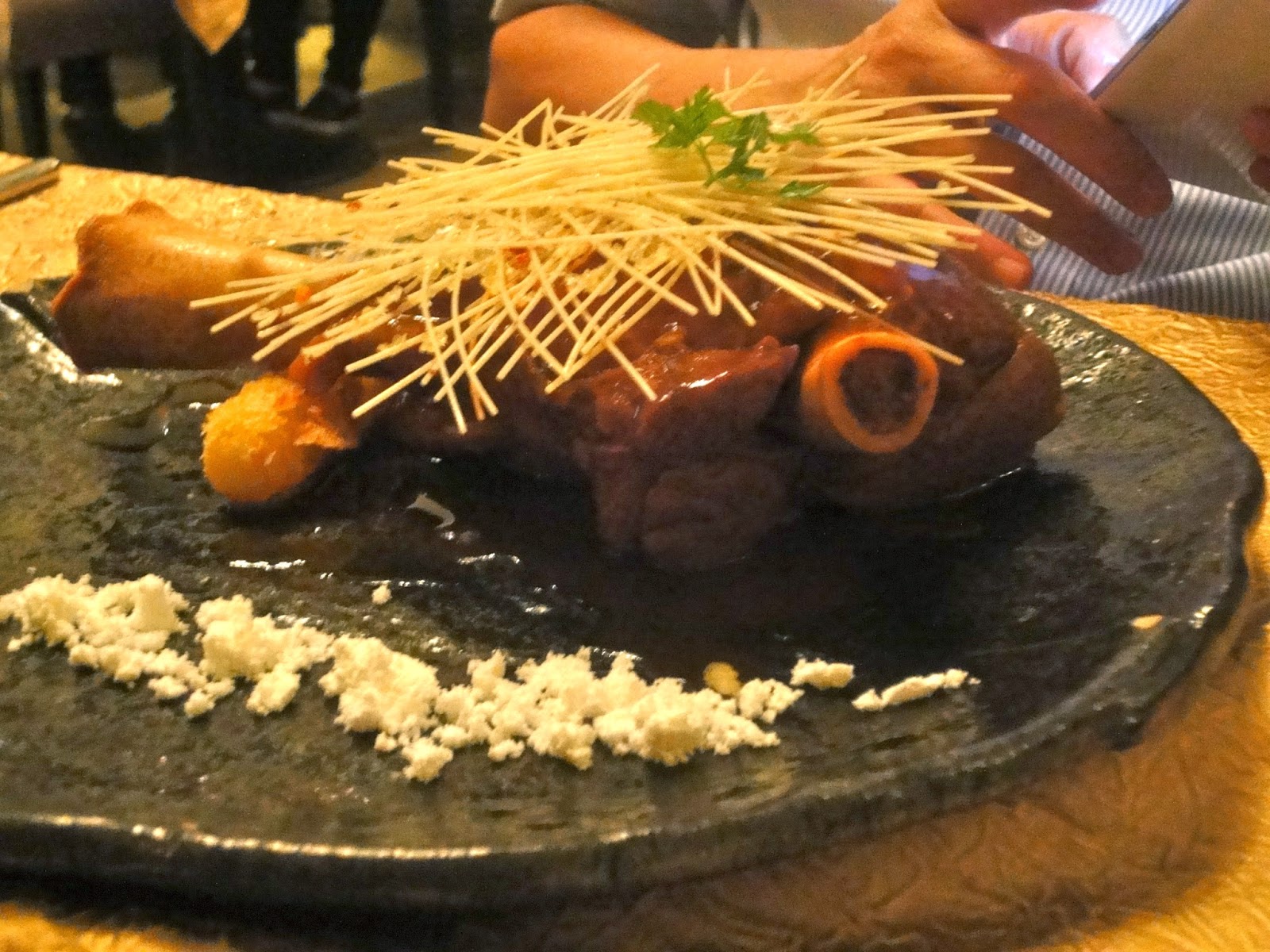 Dad ordered the Spiced Braised Lamb Shank with Potato Panko & Extra Virgin Olive Oil Powder. My dad left the plate clean, which is a testament to the dish. 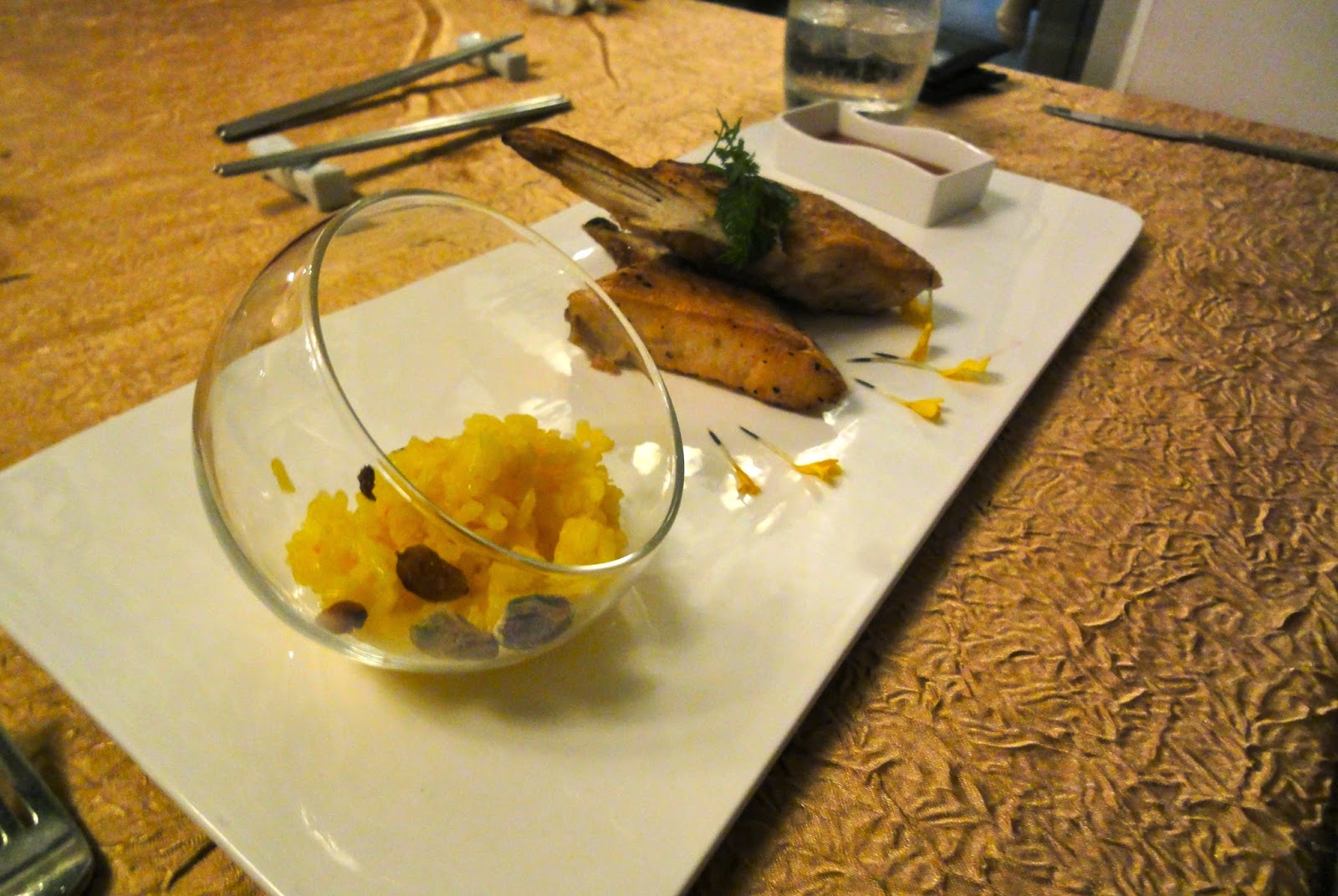 Bro ordered the Sea Salt Grilled Hamachi with Ponzu and paired with Saffron Rice. I quite like the Saffron Rice but my bro was full by now and could only finish half of the swordfish. His verdict was that this dish was rather normal. 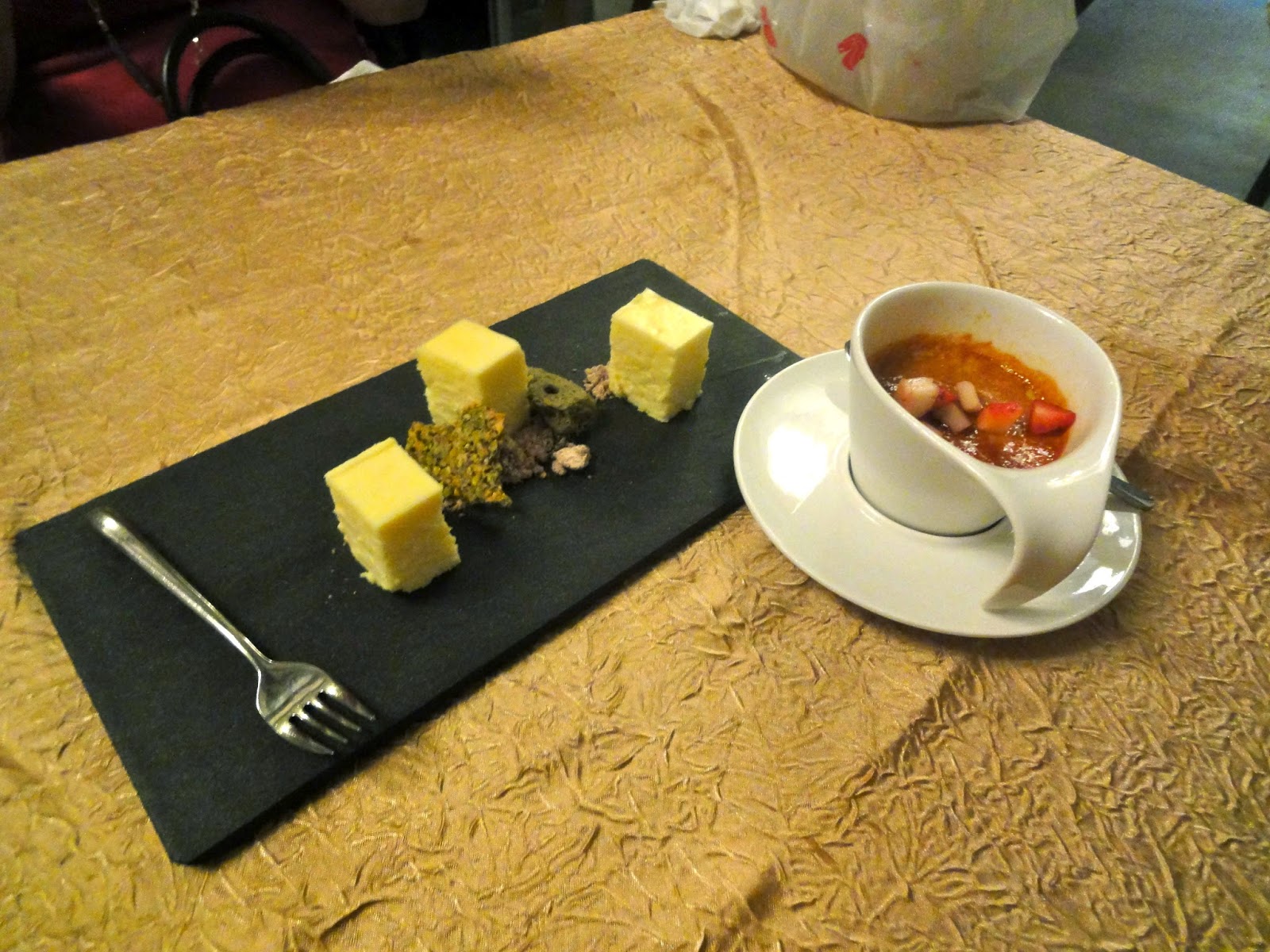 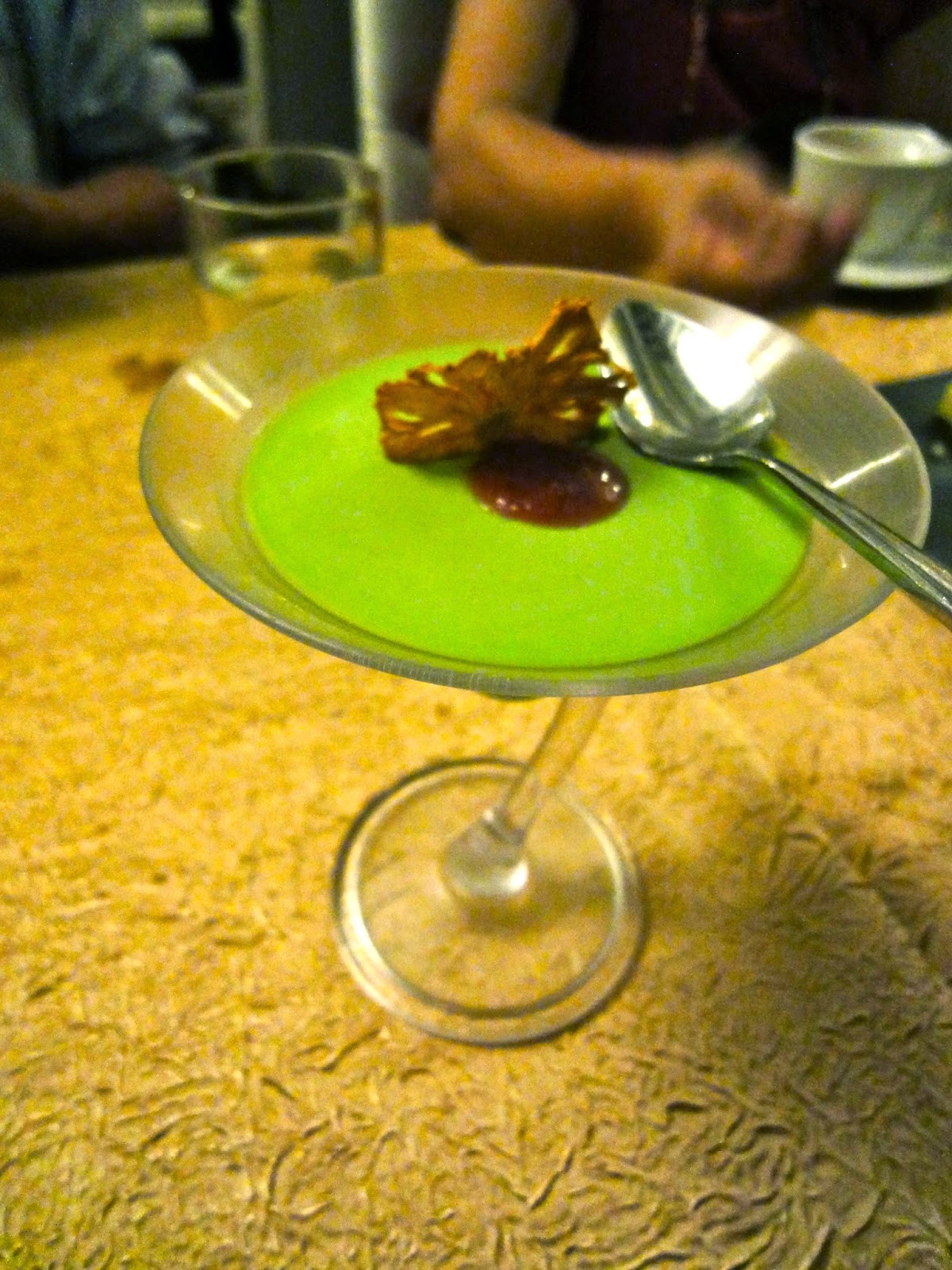 Six – Dessert
Top photo would be the Homemade Cheesecake with Pistachio Sponge (left) and the Triple Espresso Creme Brulee (right) ordered by my mum and bro respectively but they decided to share. The bottom photo is my dad’s Green Tea Panna Cotta with Mixed Berries Compote. 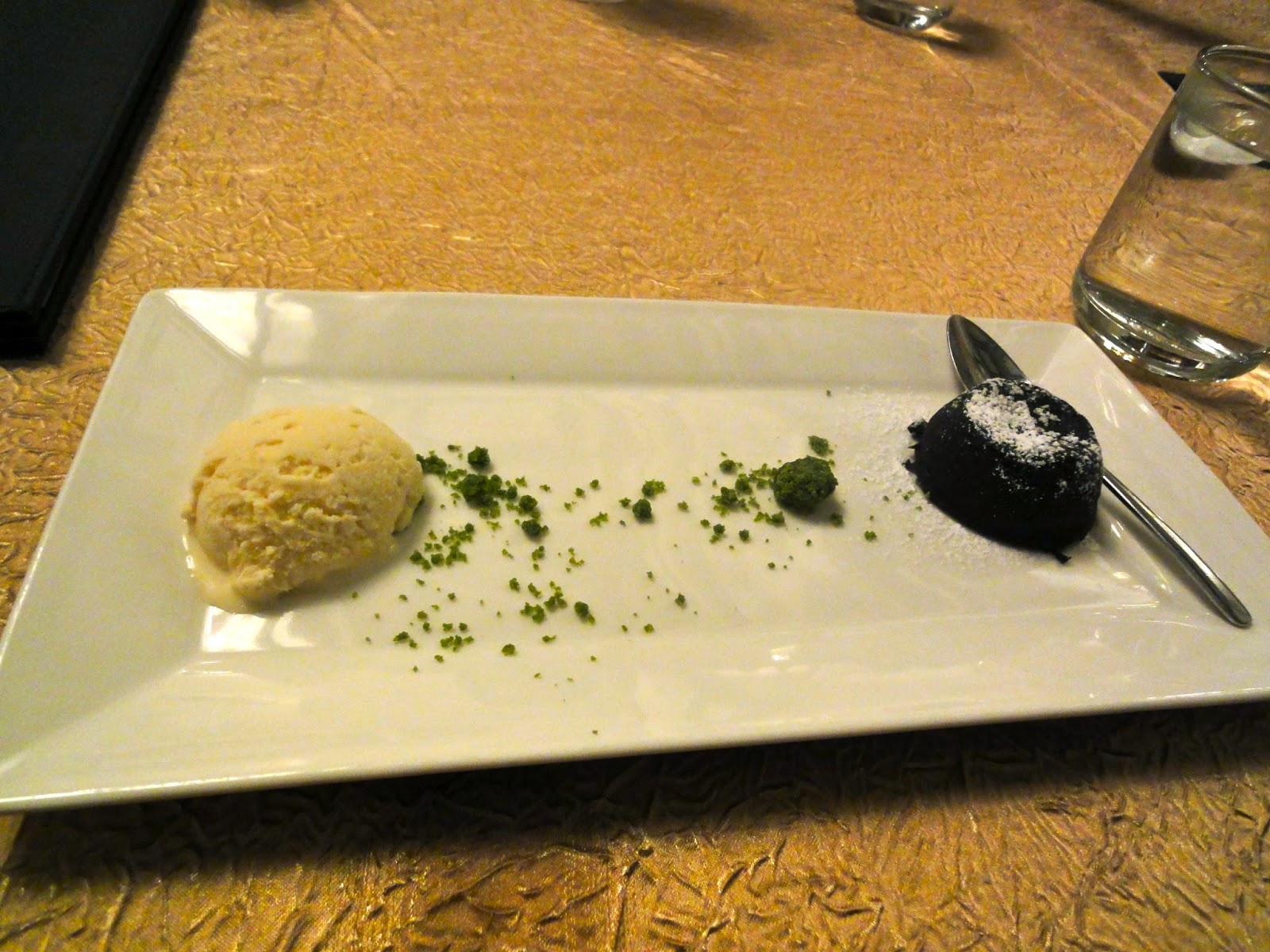 For my dessert, I opted for the Chocolate Lava Cake with Homemade Gelato. Slightly predictable but I was had at the word ‘gelato’. 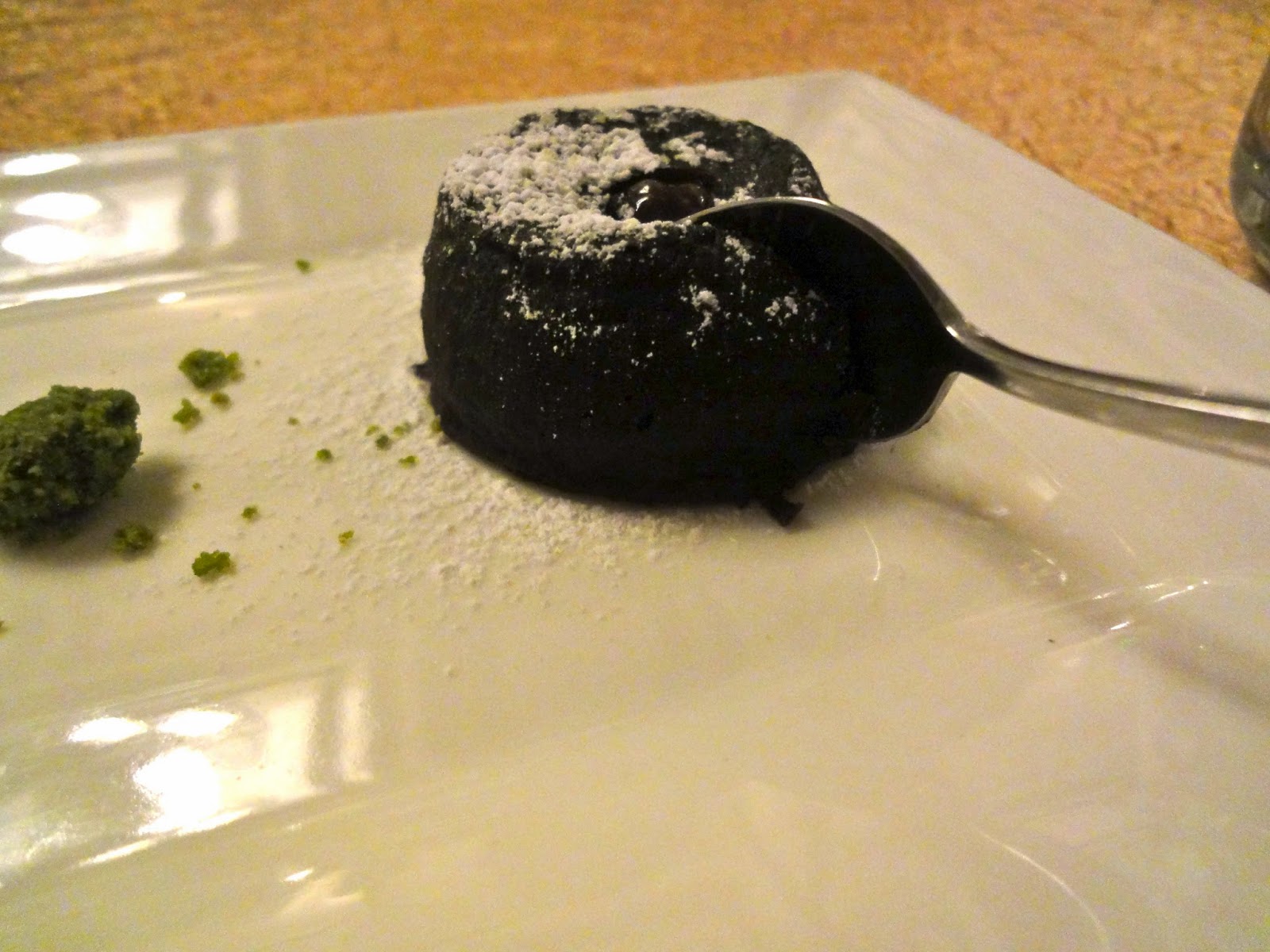 Making lava cake isn’t easy and it’s the ooze of chocolate that’s the most important. It wasn’t very oozy but it’ll do. However, I’m more impressed with the gelato. The vanilla was really good and you could tell that it didn’t come from a bottle of extract. 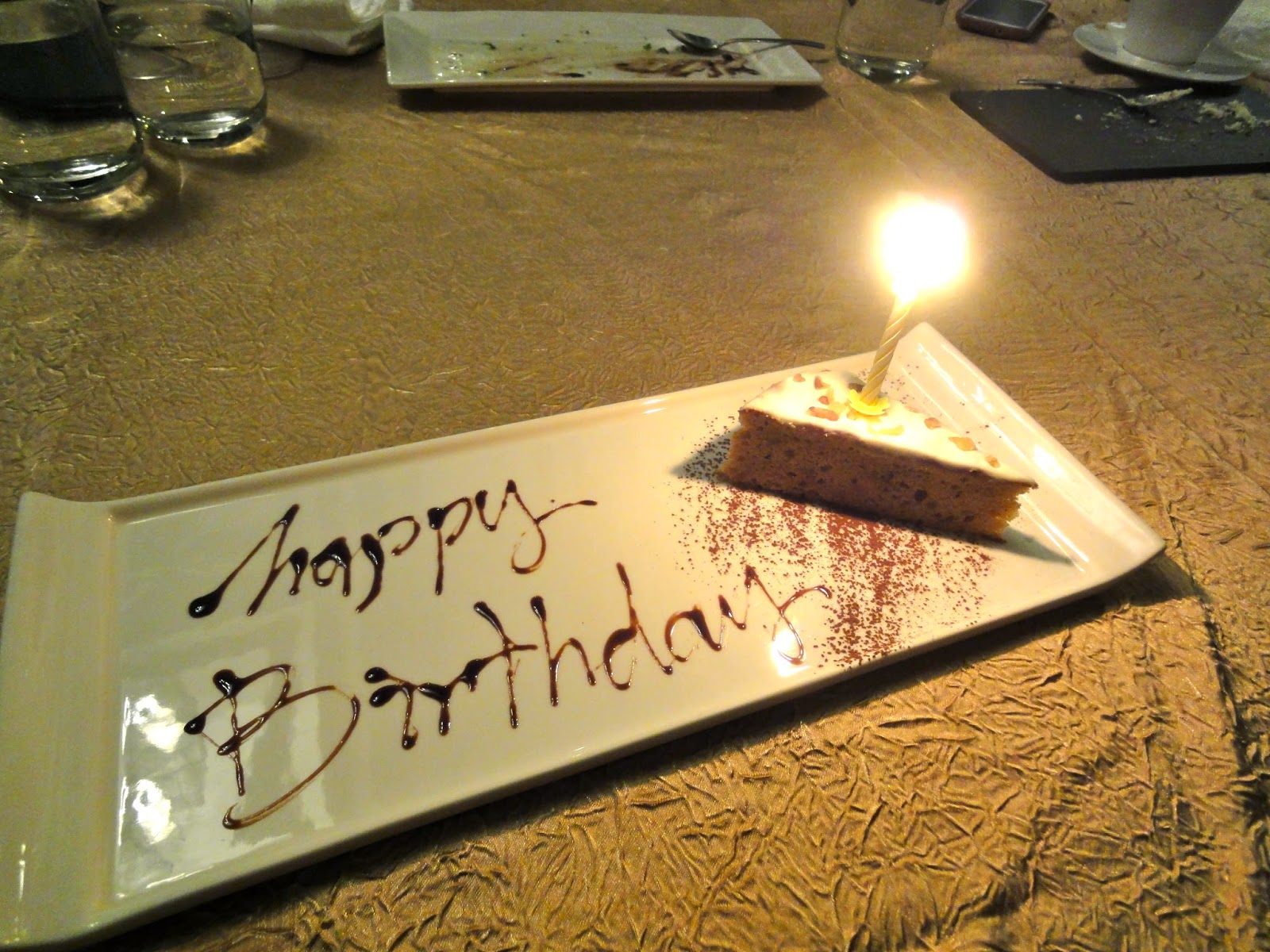 Complimentary carrot cake!! Hur hur…I was actually hoping that my parents or bro told the wait staff so that such things were arranged but alas, it’s always me. I did get slightly jealous when two similar plates went to two separate tables during the course of our dinner. Doesn’t help that it’s a bit weird to have two other people share your birthday to celebrate it with their boyfriends in the same restaurant. 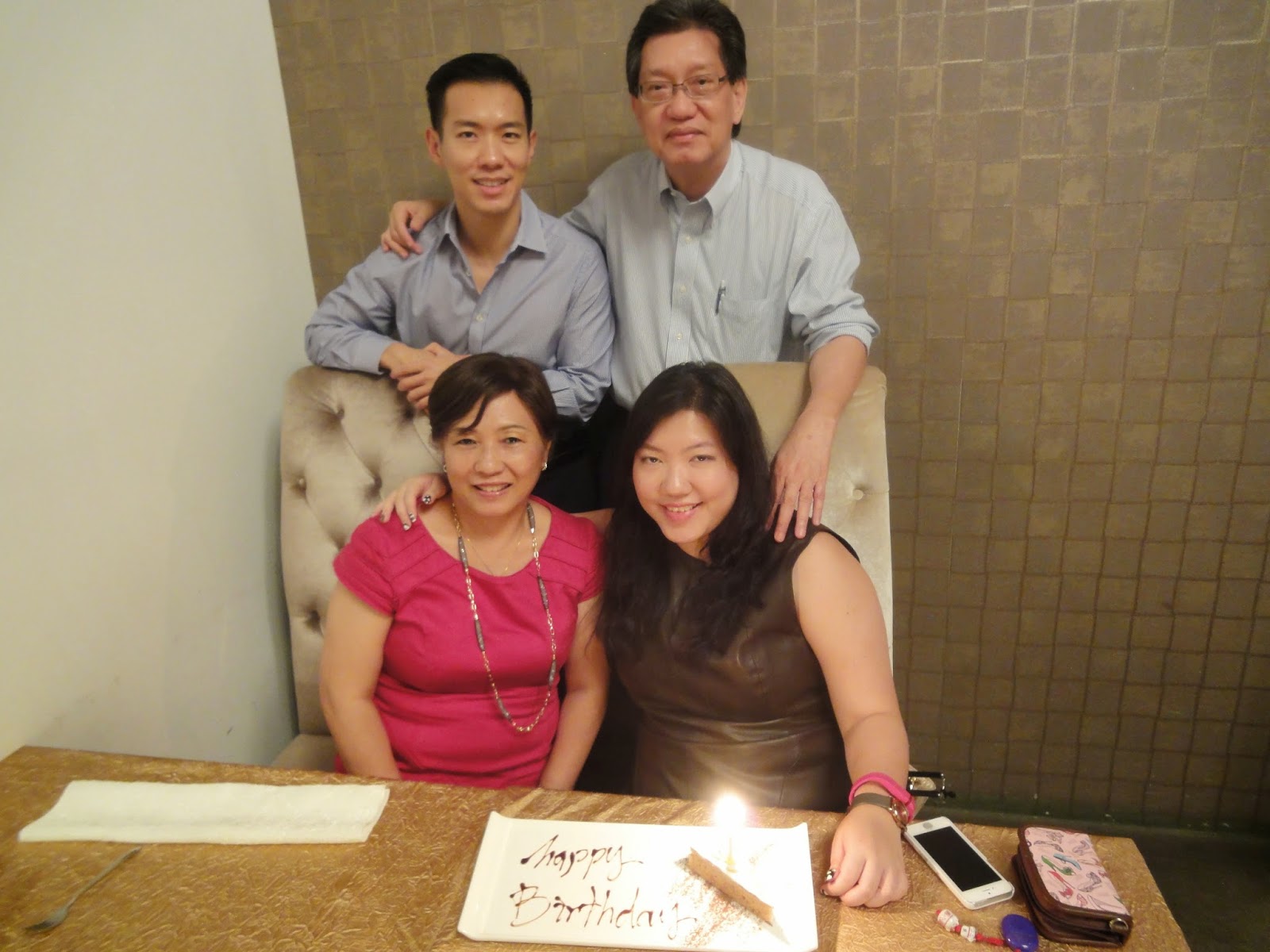 What I do like about The Clan is that it doesn’t feel too ostentatious and unfriendly. The wait staff aren’t intimidating, unlike some other high class establishments, and they’re quite easy to talk to. I reckon that the price is really value-for-money because the quality of every dish is very good.

I liked how the chef did not try to fuse different cultures of food into a plate but rather, to fuse flavours that worked most of the time. I thoroughly enjoyed eating at The Clan and similarly to the Lady Iron Chef’s review, this is a good place to bring your date if you don’t want to break the bank and she’s the sort who does not like pretentious squares of food that do not fill you up. Seating is limited so reservations are recommended.

Latest as of 23 July 2015, The Clan Restaurant has since moved to the following address: