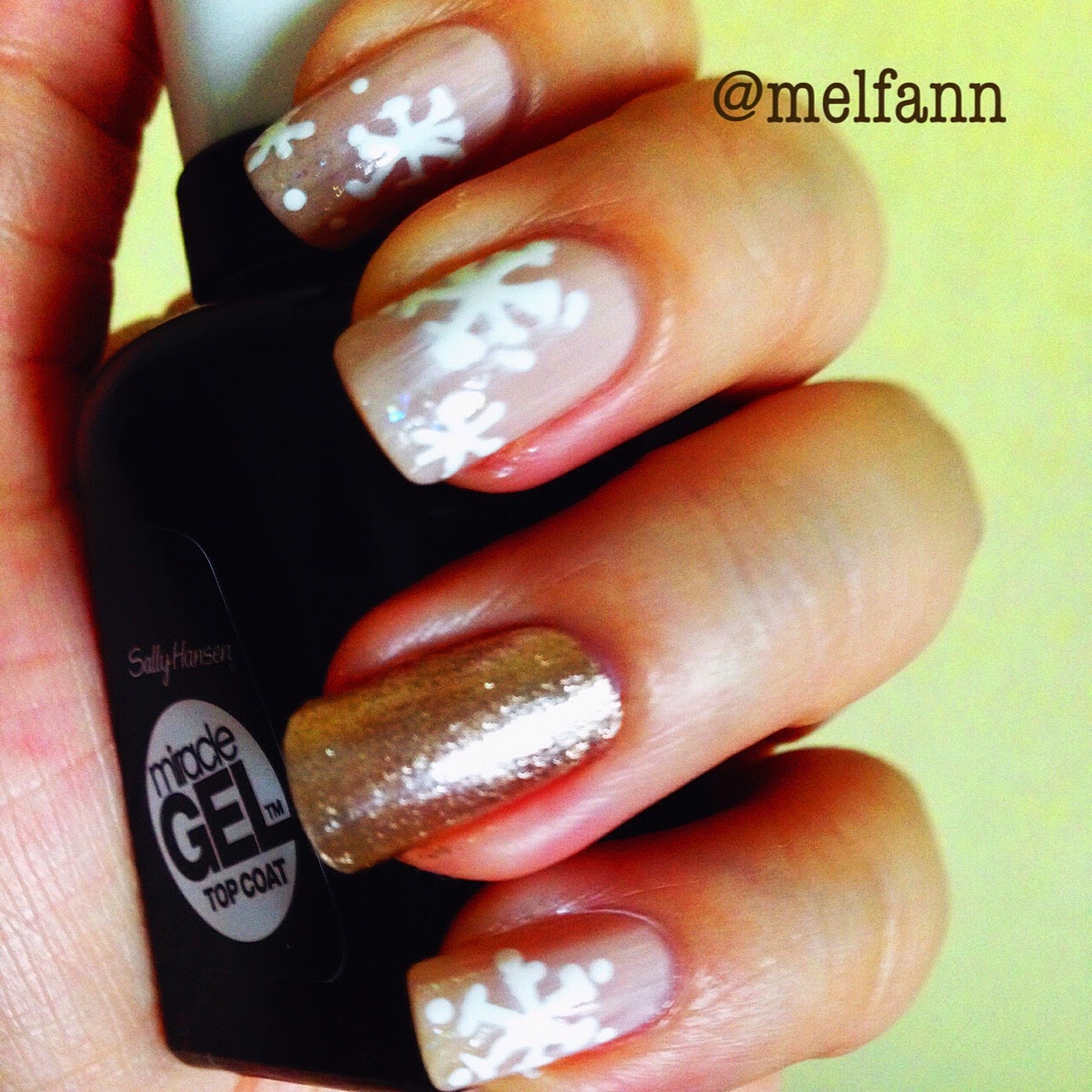 It’s December so the Christmas themed nails are going to come out! I decided to use this opportunity to try out Sally Hansen’s latest Miracle Gel series which is supposed to last a lot longer than normal polishes and it does not require any UV/ LED lamps to cure the nails! Moreover, the instructions state that two coats of colour are needed before topping it off with their Top Coat to ‘cure’ and seal in the colours.

In my above design, I used Birthday Suit 110 (the beige one) as well as the gold Game of Chromes 510 while the white snowflakes were drawn with The FaceShop’s white nail art pen. 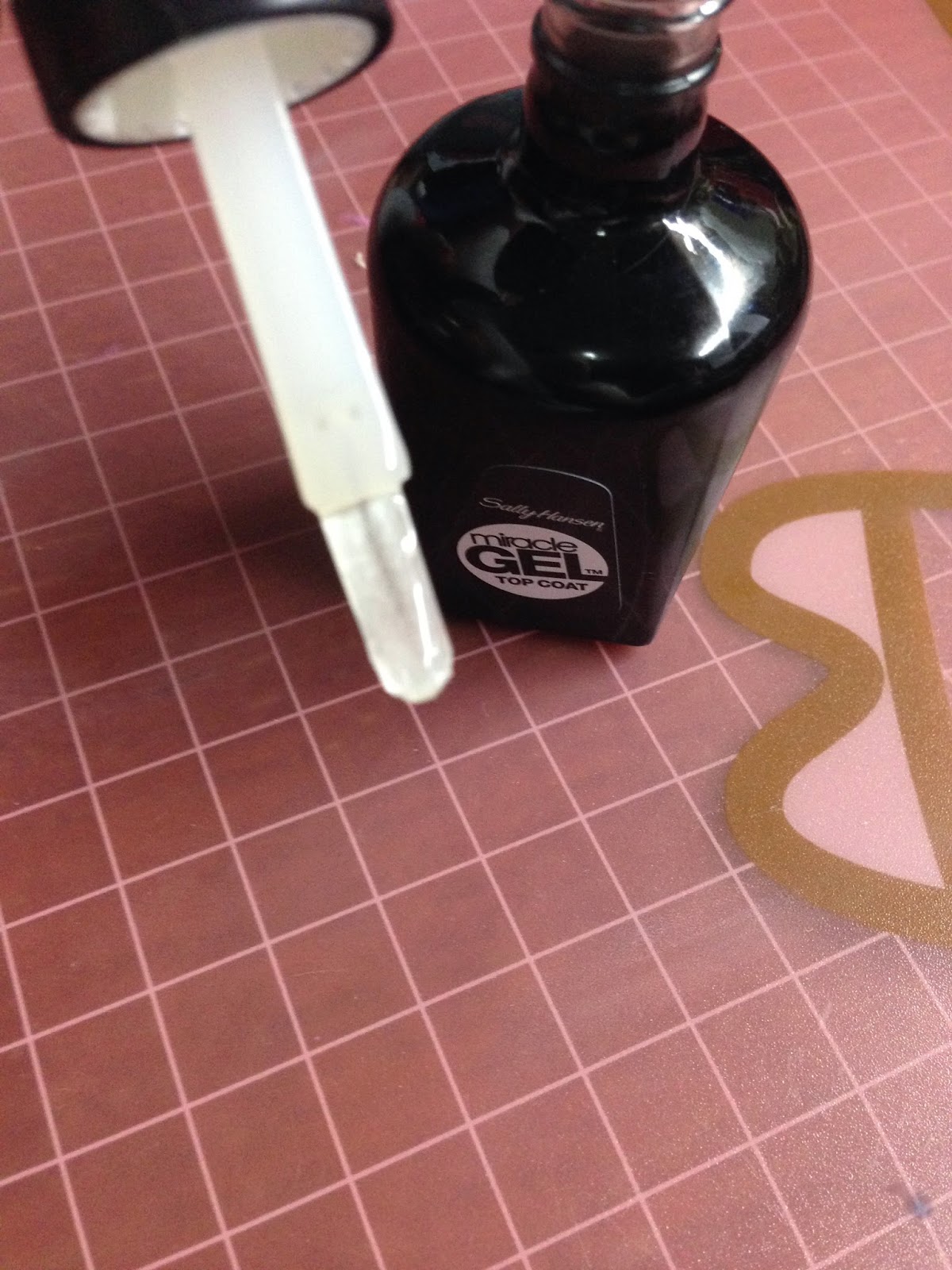 First thing that I noticed about Sally Hansen’s Miracle Gel polish was the brush head. Not sure whether you can see it clearly from the photo above but the brush head is round, unlike the usual straight bottom ones. This makes a HUGE difference when you’re painting your nails near the cuticles because it curves to the round shape of your cuticles! Now…why didn’t anyone think of doing this earlier? As you can tell, I was already super happy with this superior polish brush and needless to say, this is one of the few times where my polish did not have any weird smudges on my cuticles.

Secondly, the instructions state that you need not put on any base coat and I was a little sceptical when I read this. However, it continued to surprise me because it did even out a bit of the nail ridges. Ok Sally Hansen, you’ve won another brownie point.

Now, onto the colours. I was not very impressed with Birthday Suit 110 because it was a bit of a trial and error trying to get the opaque beige polish onto my nails on the second coat. It felt as if the first coat became tacky really quick and that I should’ve waited for it to dry completely before putting on the second coat. For Game of Chromes 510 however, I was thoroughly impressed! I was expecting it to come of a little less glittery/chrome but it did! On the first coat! The second coat merely made the colour more metallic and pronounced. So happy with this because it’s EXACTLY what I was looking and hoping for!

Now I know why the polishes are flying off the shelves. I highly recommend buying their colour + top coat set (S$16.90) because it is essentially buying 1 and getting 1 free. Their normal colours in this series cost S$16/bottle and is their most expensive range. You can find them in Guardian, Watson’s and John Little (where I bought mine) but no guarantee on stock.

It has been 3 days since I’ve polished my nails and I normally redo my nails every week due to paint chipping so let’s see whether this design will last longer than my usual 1 week!

Update as of 12 Dec 2014:
I am thoroughly impressed. It has been more than a week (I did my nails on 4 Dec) and there isn’t any chipping of the paint! Also, it seems to be preventing my infamous third fingernail on my right hand from peeling and breaking. Now I feel less compelled to remove the design off to put on a new one. But…I also want to change the design on my nails. Decisions, decisions.

Anyway, conclusion is this – if you like your nail polish to last really long without paying exorbitant prices, go get Sally Hansen’s Miracle Gel series. It’s worth the money.