Toasting The Macallan For Years To Come

The first time I ever consciously knew that I was drinking a Macallan whisky was last year, when we opened 2 bottles of it during a colleague’s (now ex-colleague) leave-do. Fast forward a year later and here I am at the “Toast The Macallan” event held at Marina Bay Sands Convention Hall. I went to the 12.30pm session on Sunday, 18 Jan 2015. 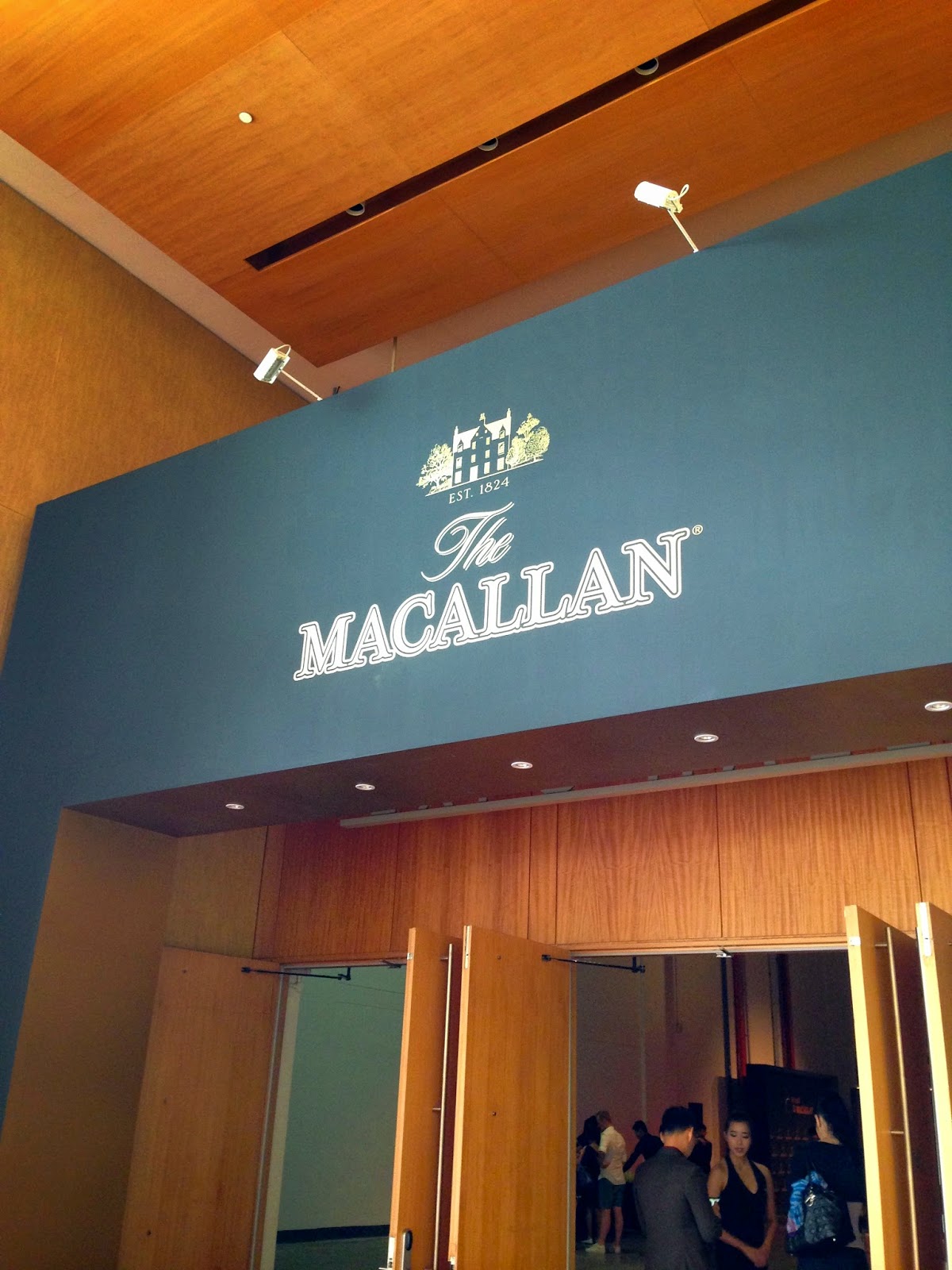 Thanks to Weekender, I won for myself a pair of tickets (worth S$38 each) to this interesting event that walks you through how a Macallan whisky is made as well as a whisky tasting session. You’re first greeted by a Macallan ‘model’ dressed in a little black dress with The Macallan logo and their hair done up in a French twist. Every attendee was given a complimentary whisky cocktail – The Macallan Gem Sour: 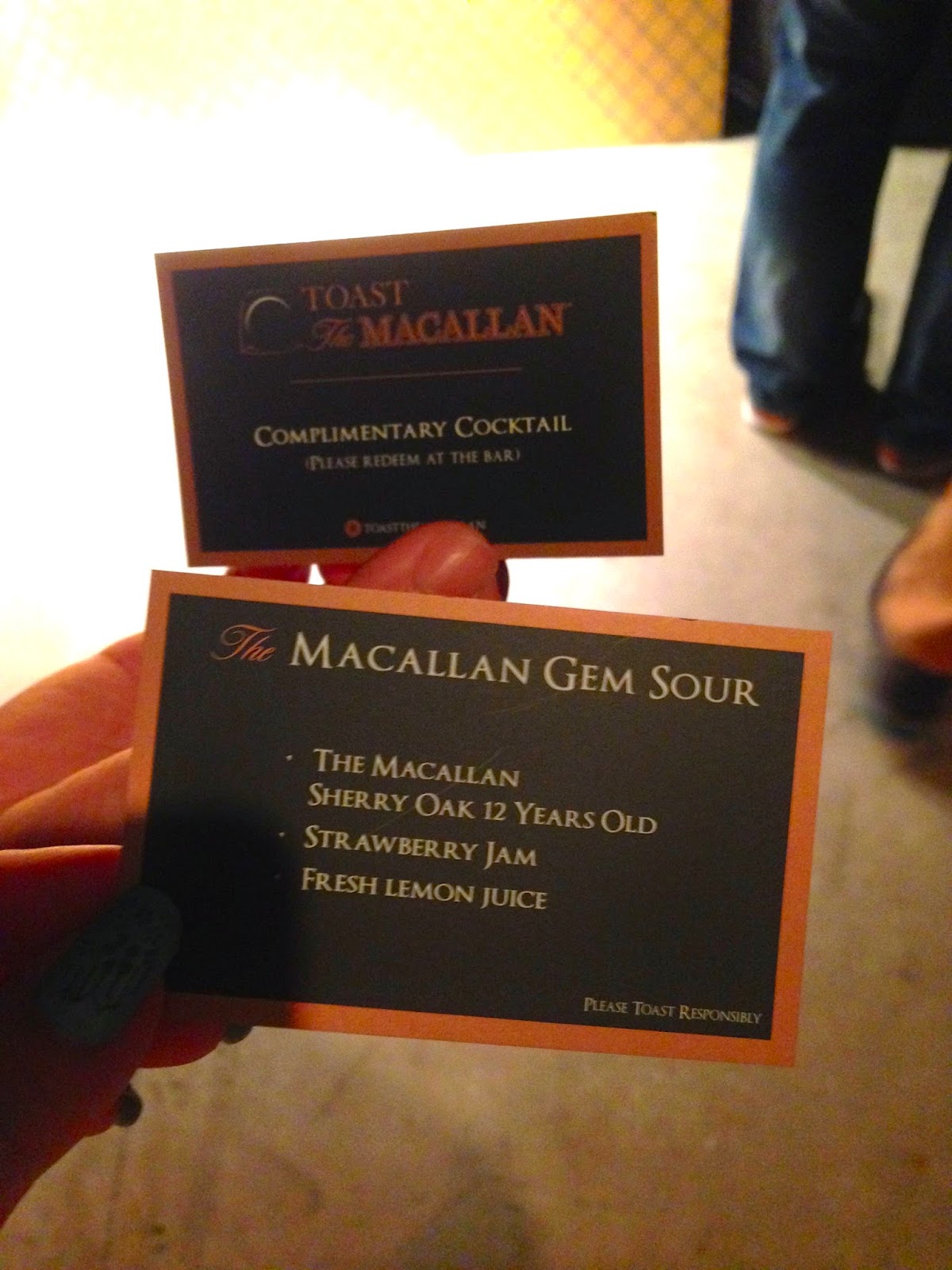 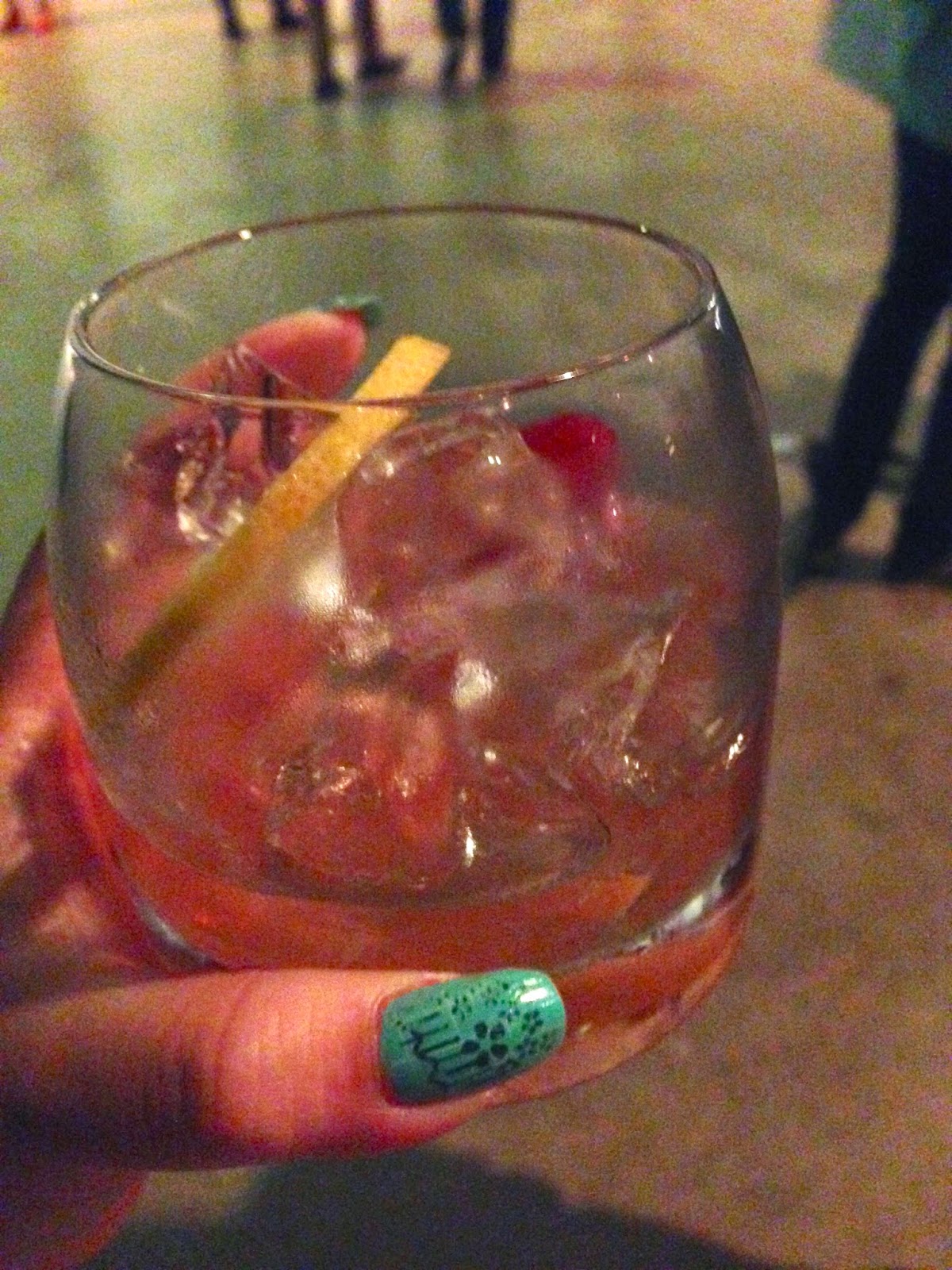 That is how much I was given and I was really bummed about it because the others got more. They said that theirs was more simply because the ice had already melted but my cocktail tasted a bit diluted so…blah. That said, the Whisky Gem Sour was good and I think I might try to replicate it at home one day. 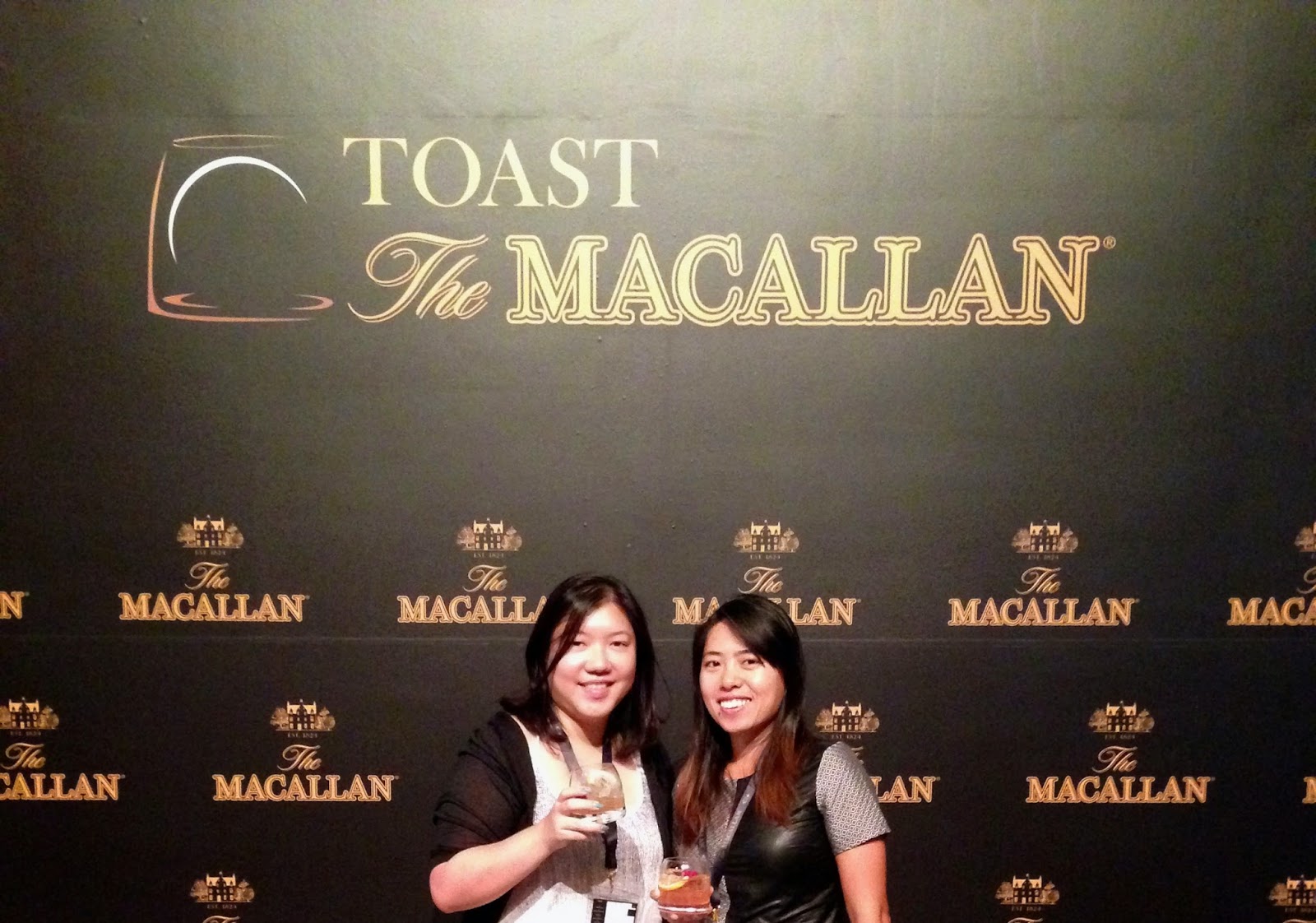 The highlight of the whole event has got to be the whisky tasting session so I’m going to jump straight to that. 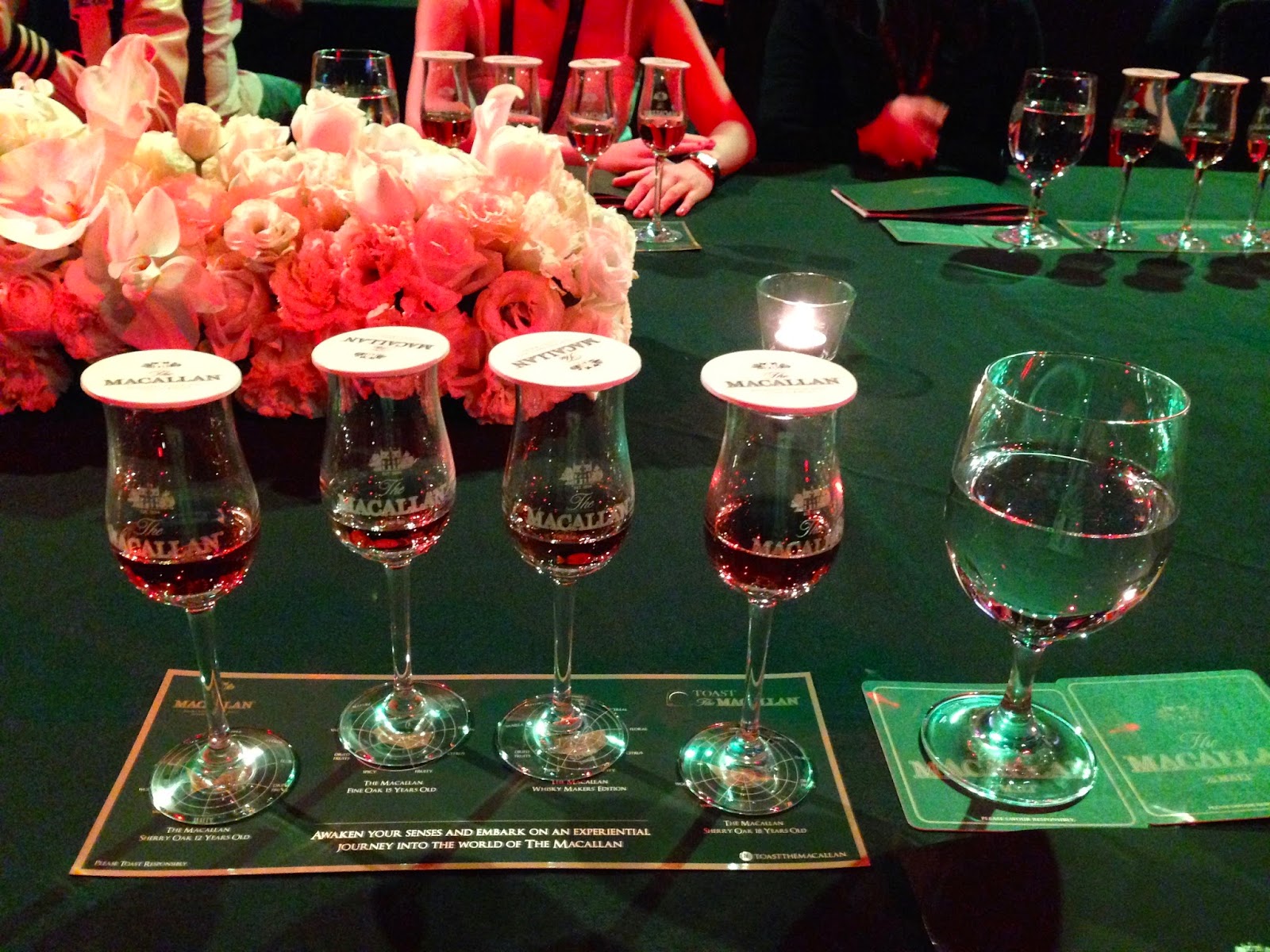 We were led to another section where there were several tables with 4 small drams of whisky and a glass of plain water. I was immediately impressed by the set up and had to mentally tell myself NOT to calculate cost of the whole event (guesstimate is 100k). 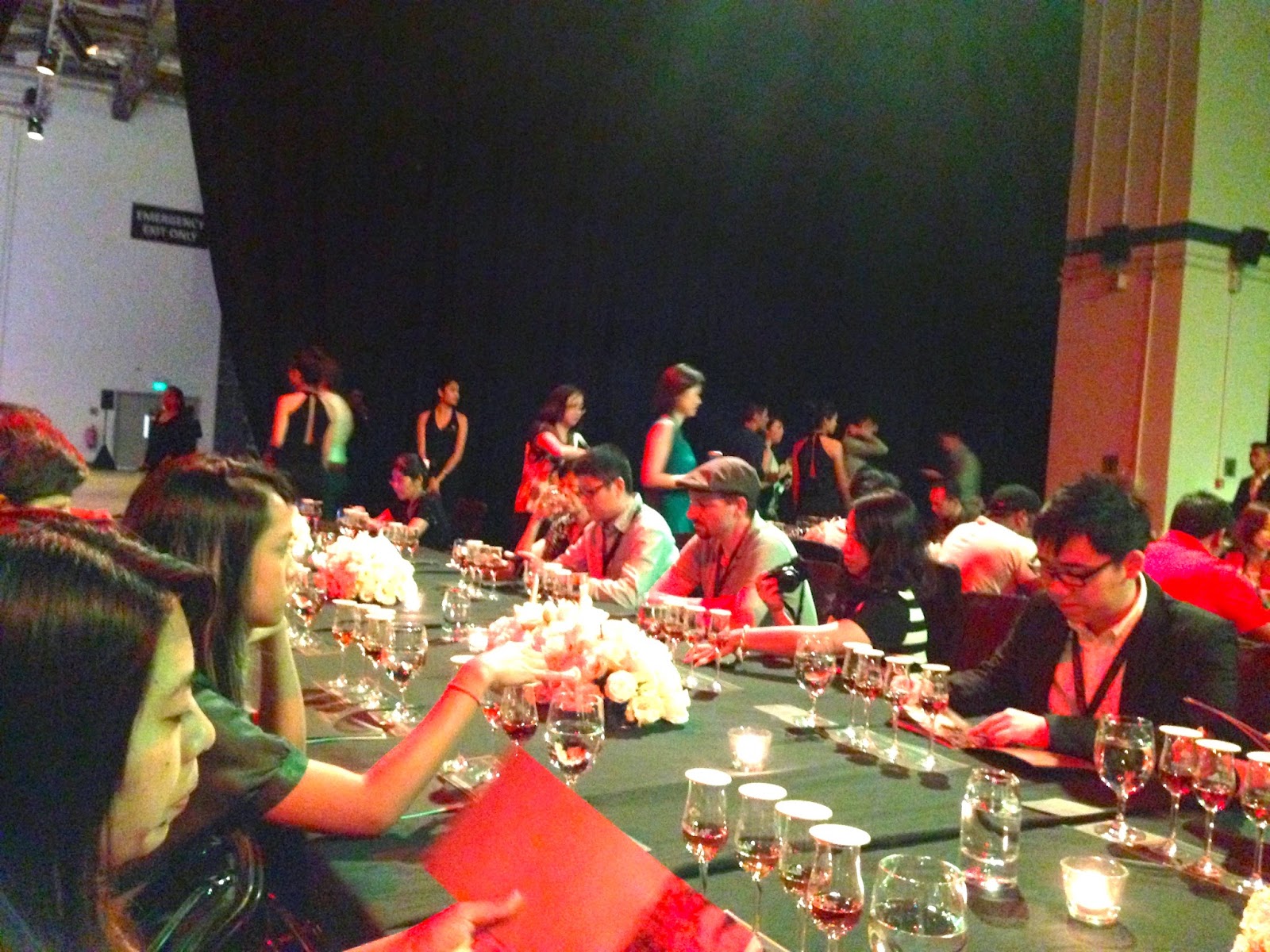 The hosts for the evening were Randall Tan and The Macallan Brand Ambassador, Kieron Elliot, who was really hilarious! 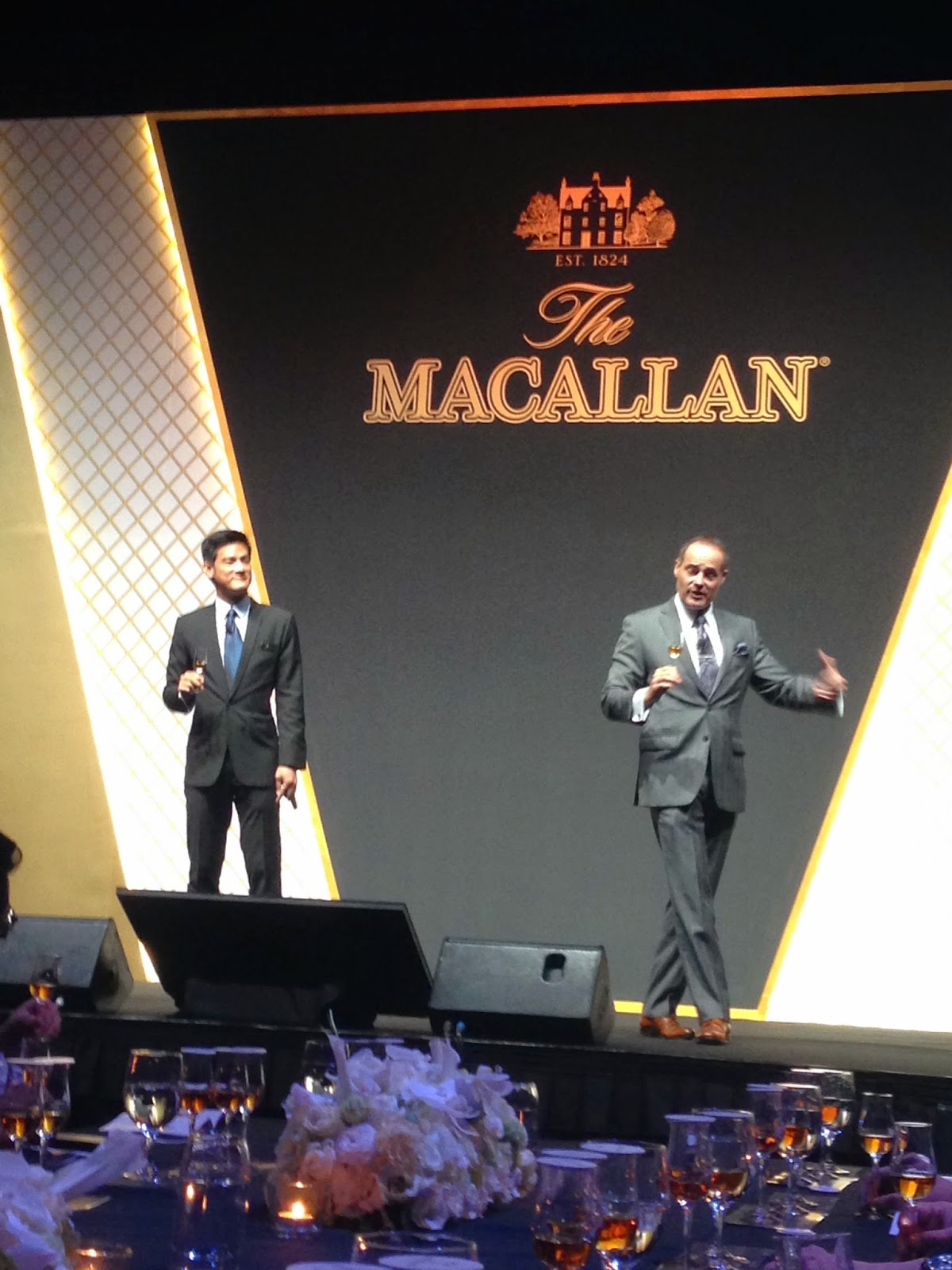 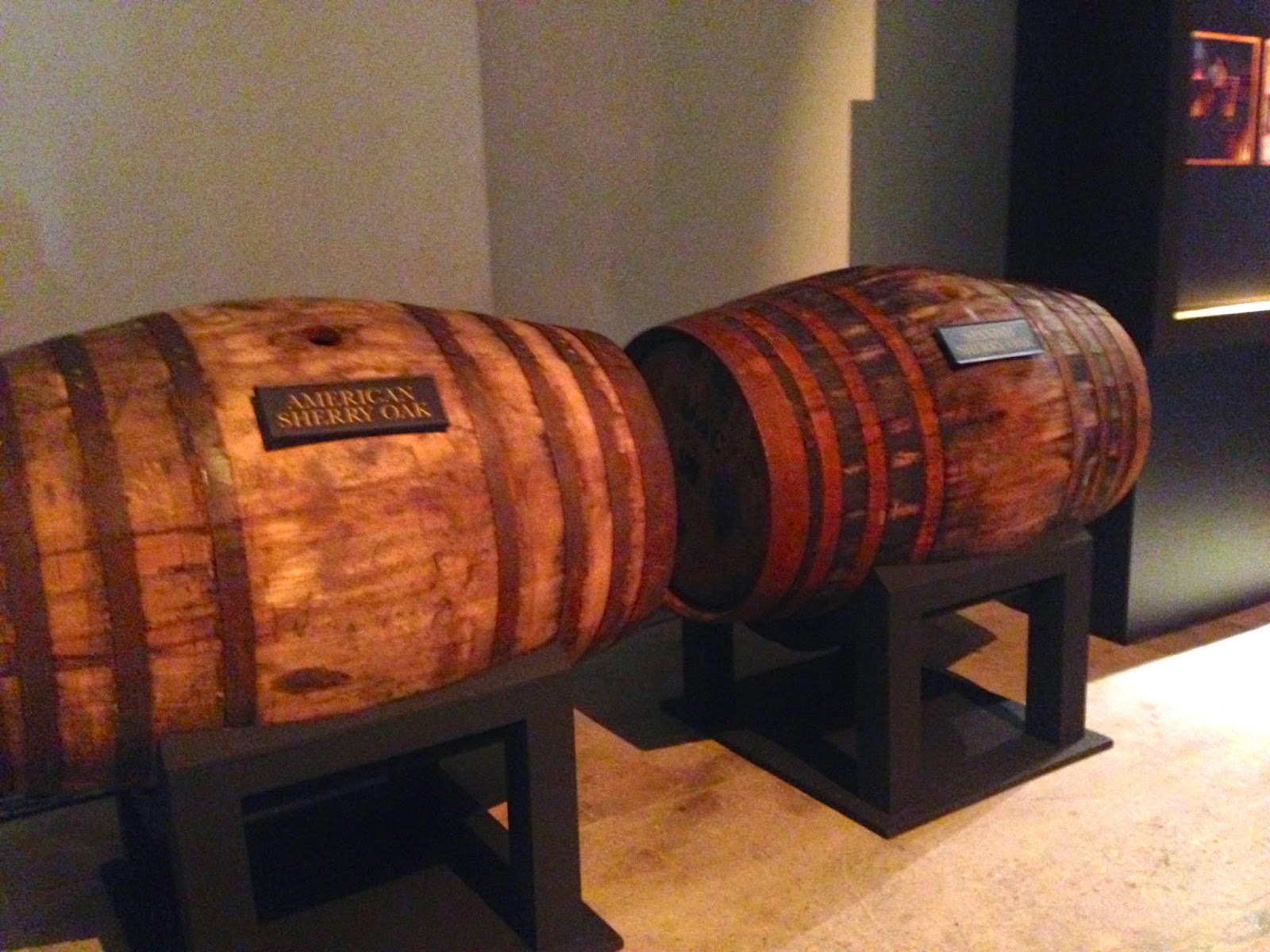 Every good whisky, we learn, starts right from the type of barrel used and for The Macallan, they highly regard the Sherry Oak used in their handmade barrels. We managed to see 2 actual barrels and even sniffed it! The oak trees take about 100 years to mature before they’re felled so if you think about it, the journey of good whisky is more than a century! 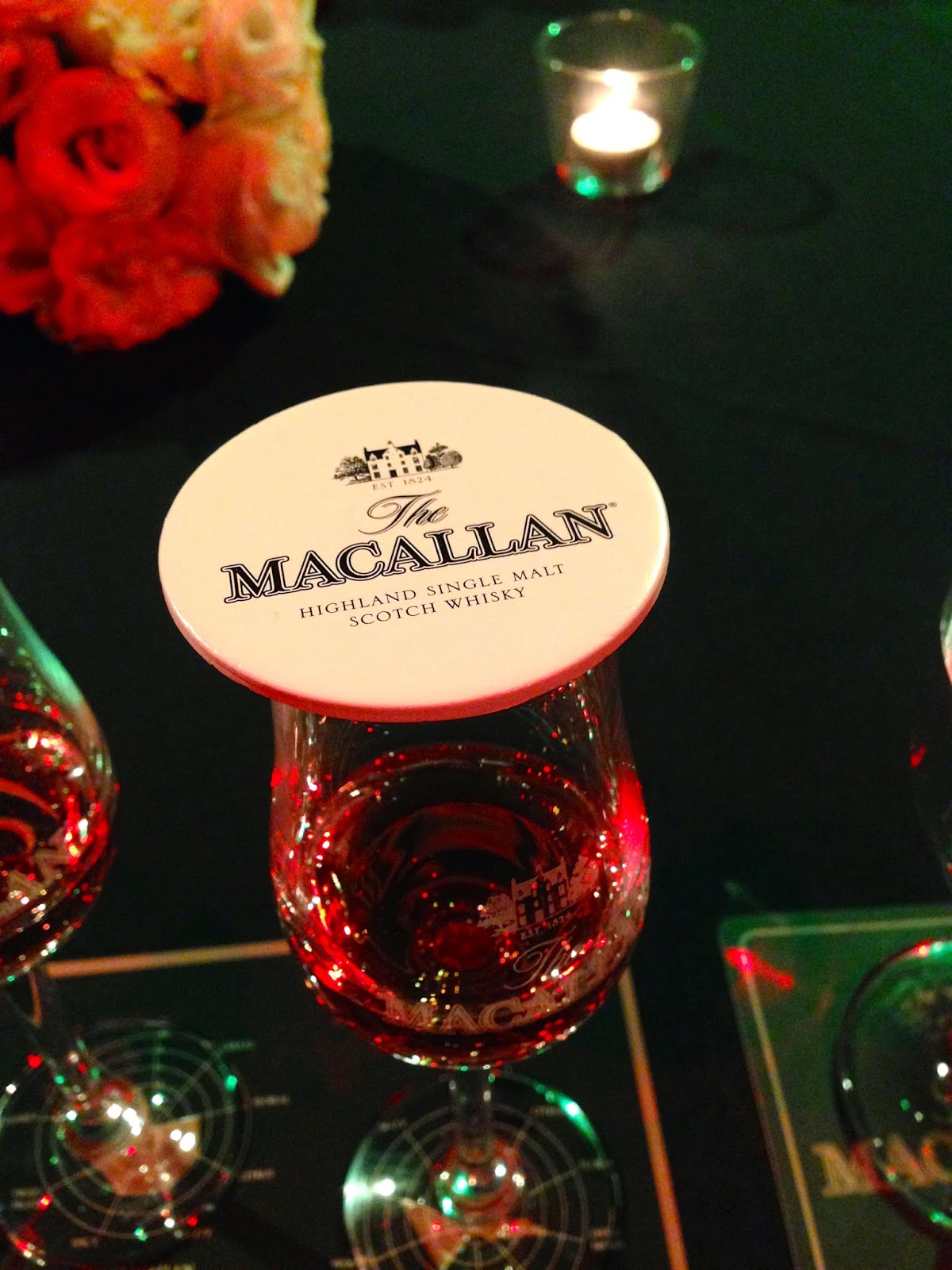 First up was The Macallan 12 Years Old whisky, which we learnt that all Macallan whiskies are naturally coloured from the oak and has no added colouring, unlike some other whiskies. Also, the darker the whisky does not mean the longer the whisky is aged because it depends more on oak barrel and how much sherry it absorbs during the sherry process. 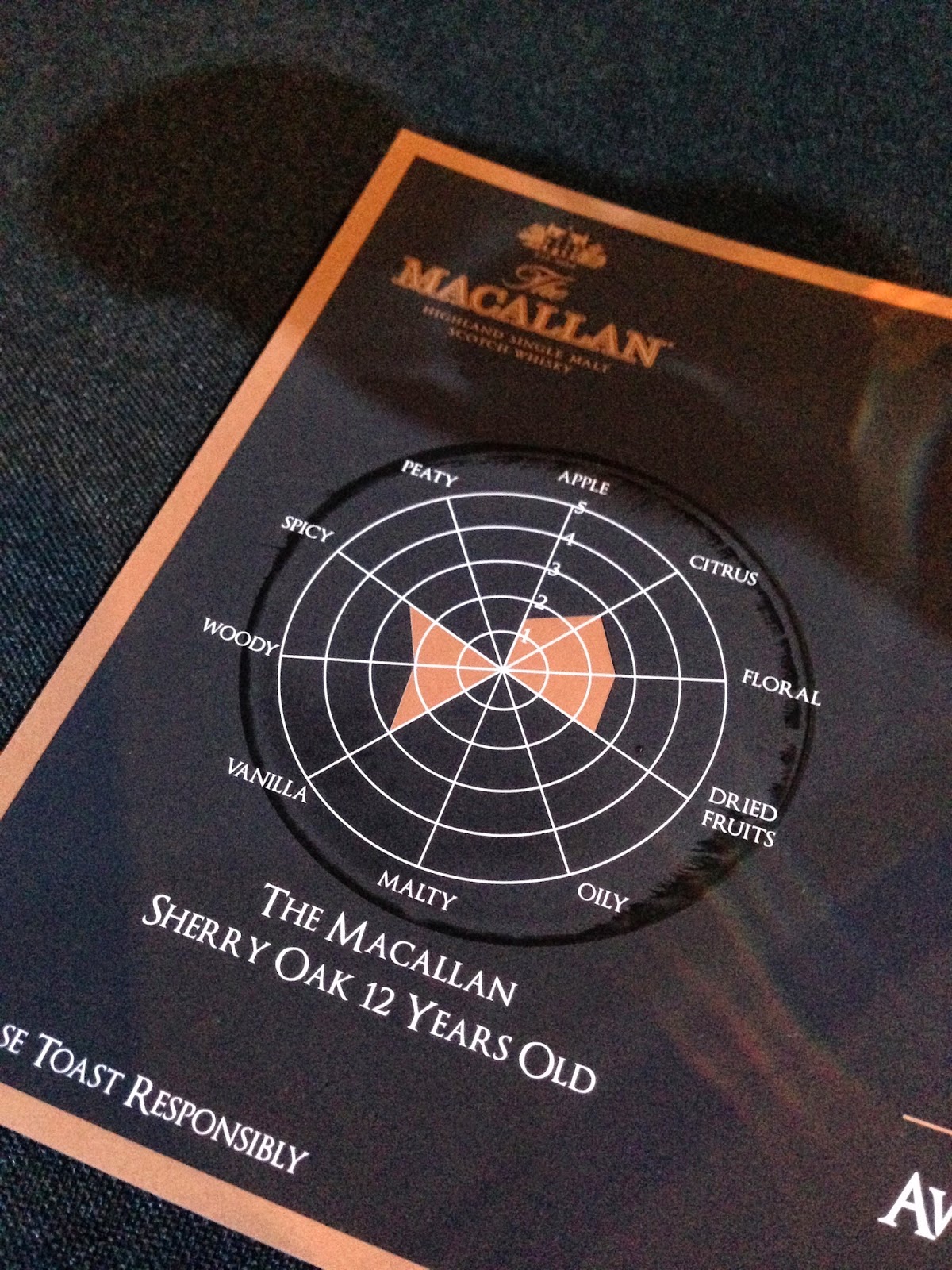 I really liked the thoughtfulness of this diagram. It tells you basically what taste notes to look out for and its respective intensity. The though went through the organisers’ minds when planning the flow could also be seen from the ‘scent bar’ located in the main exhibition area where attendees could smell the various scent notes and then be able to accurately tell the taste notes as described above.

We were also taught that unlike wine, one does not swirl whisky because the alcohol content of whisky (usually 46% abv) is enough for the scents to evaporate in room temperature. Instead, one should first hold it near one’s chin to get the first whiffs before sticking your nose and smelling in the other scents. 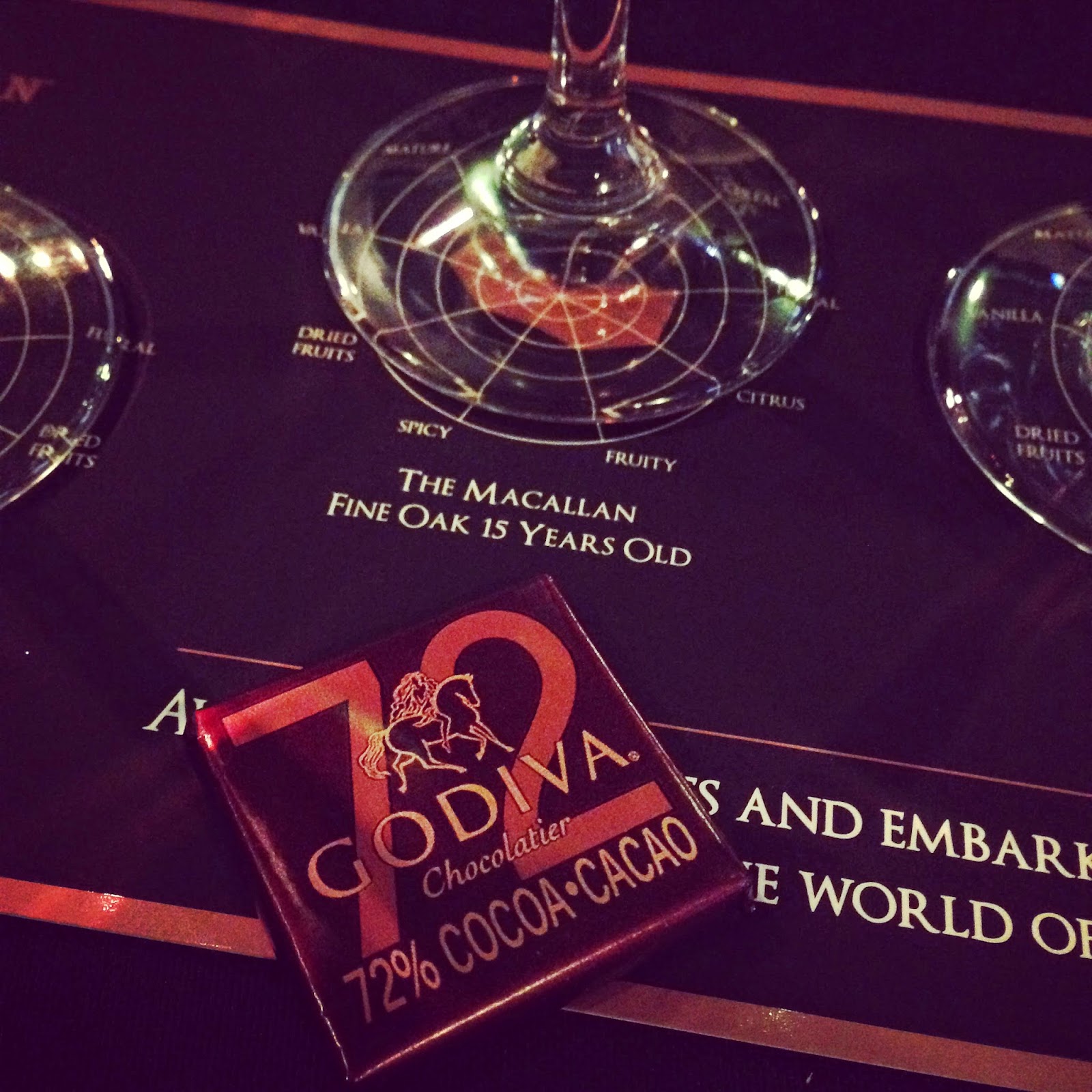 We were later each given a piece of Godiva chocolate and this was then paired with The Macallan 15 Years Old. I was really pleased with this pairing because the fruity 15 year old went really well with the chocolate and when I tried to pair it with the 12 Year old, the 12 year old Macallan tasted like straw. The 12 Year Old is the palest of all 4 whiskies and like how white wines tend to be, this whisky was significantly fruity and floral compared to the 15 Year Old. 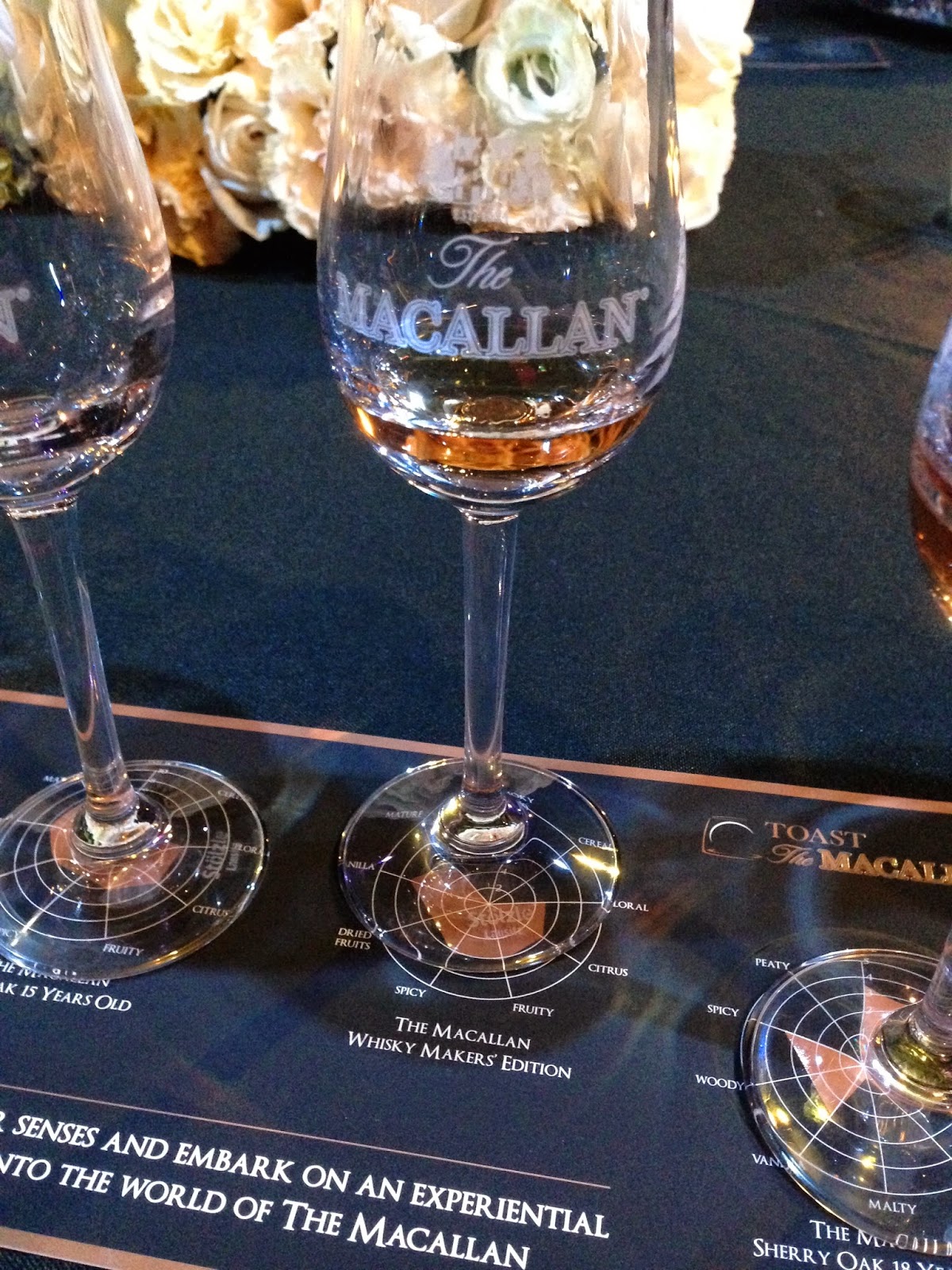 My favourite whisky of the afternoon was the Macallan Whisky Makers’ Edition. This is a special edition whisky that’s only available in airports…so anyone flying into Singapore soon? Also, as the name suggests, it’s a whisky that Macallan’s distillery manager made to his palate and is a mix of whiskies from sherry and bourbon matured oak. The result is a delicious smooth whisky that is a bit spicy and sweet without it being too fruity. 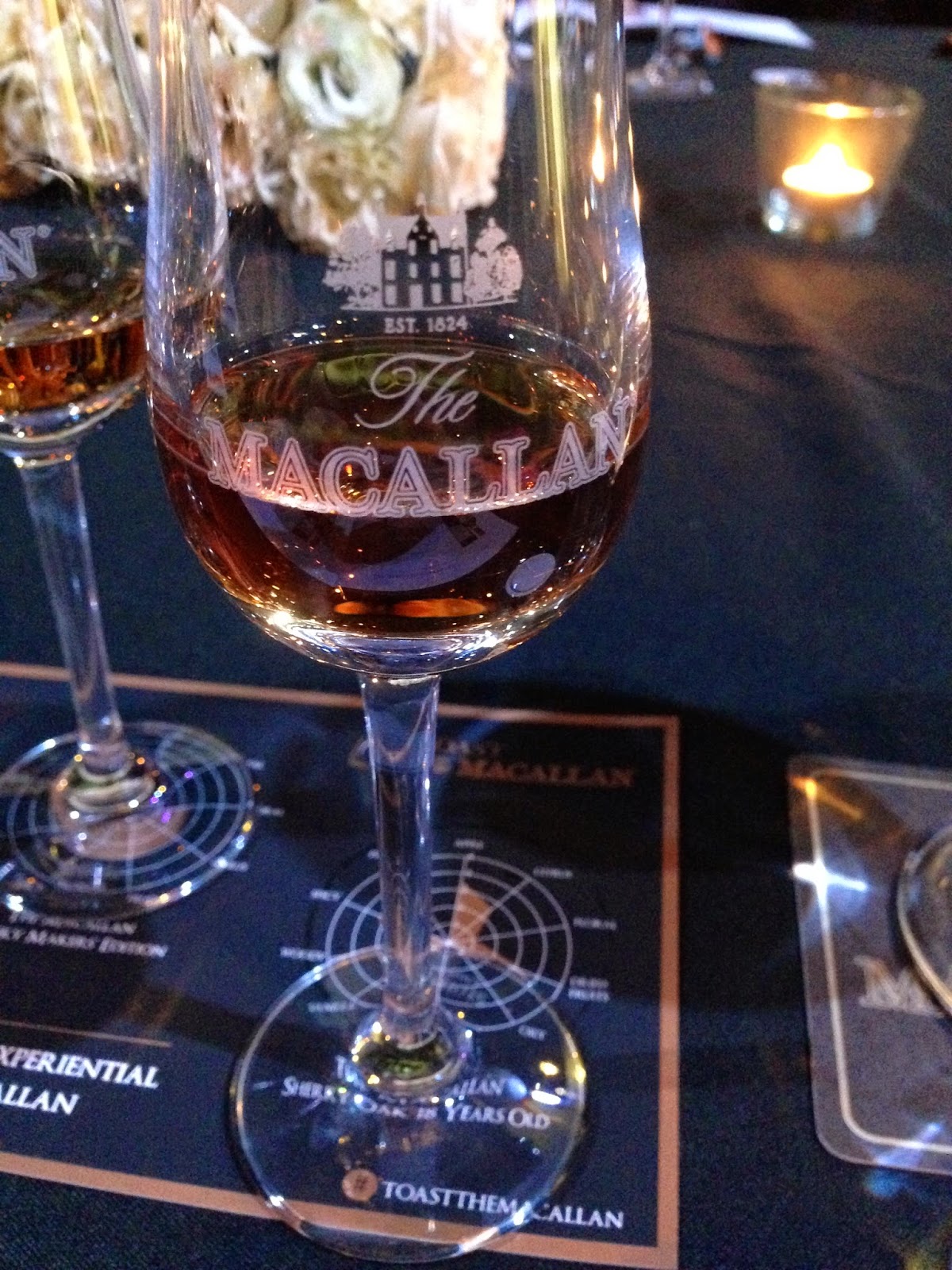 Last up was the Macallan 18 Years Old. It is distinctively the darkest of all 4 whiskies and Elliot told us that this is from the oak as the distillery manager would choose the darkest oak barrels to house the 18 Year Old Macallan. 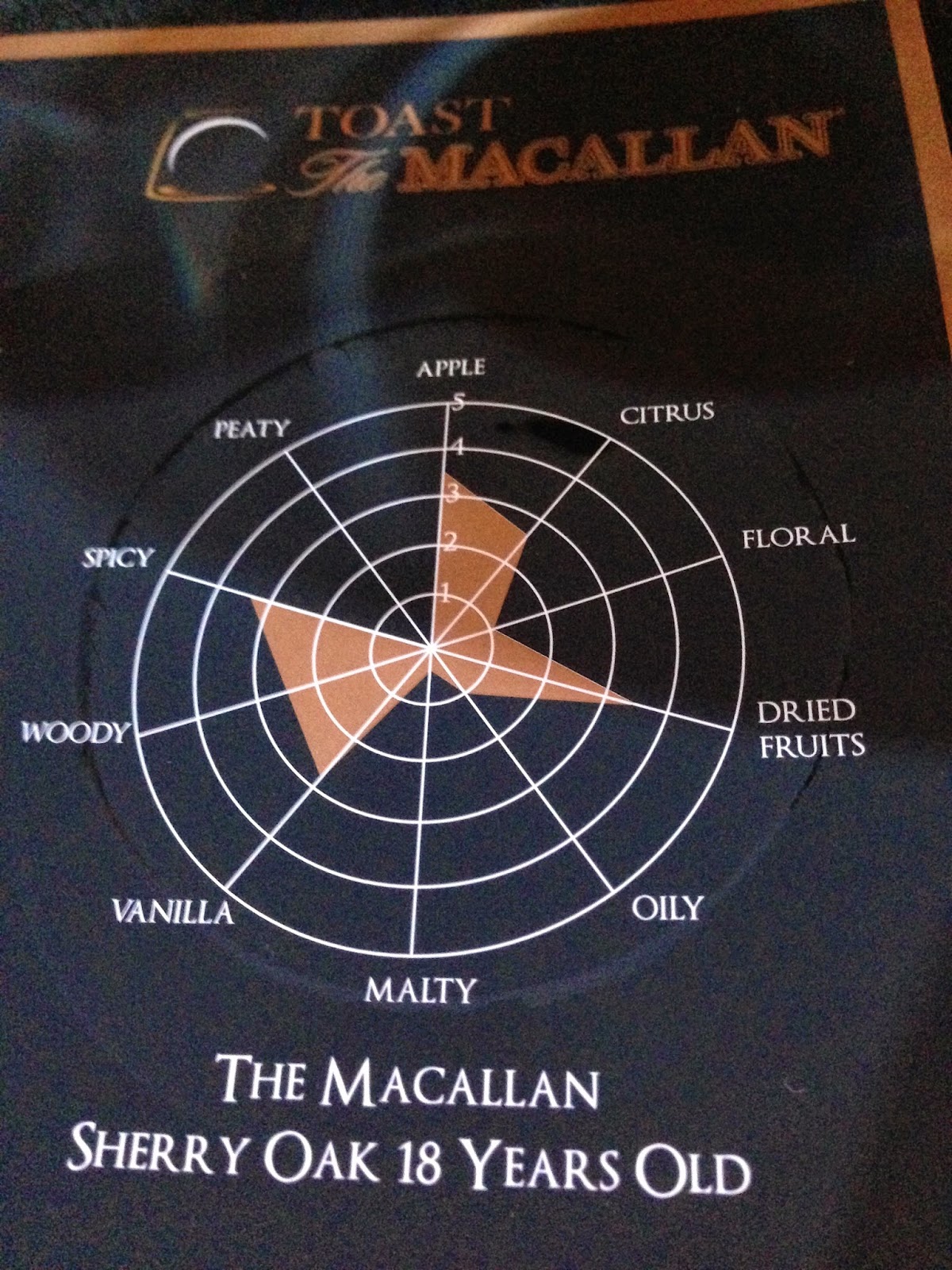 Compared to the other 3 whiskies, the 18 Year Old was mellow and full bodied. It swirled a lot better on the tongue and was the most interesting to taste. Although I still prefer the Whisky Makers’ Edition. However, I’d drink this in a heartbeat. 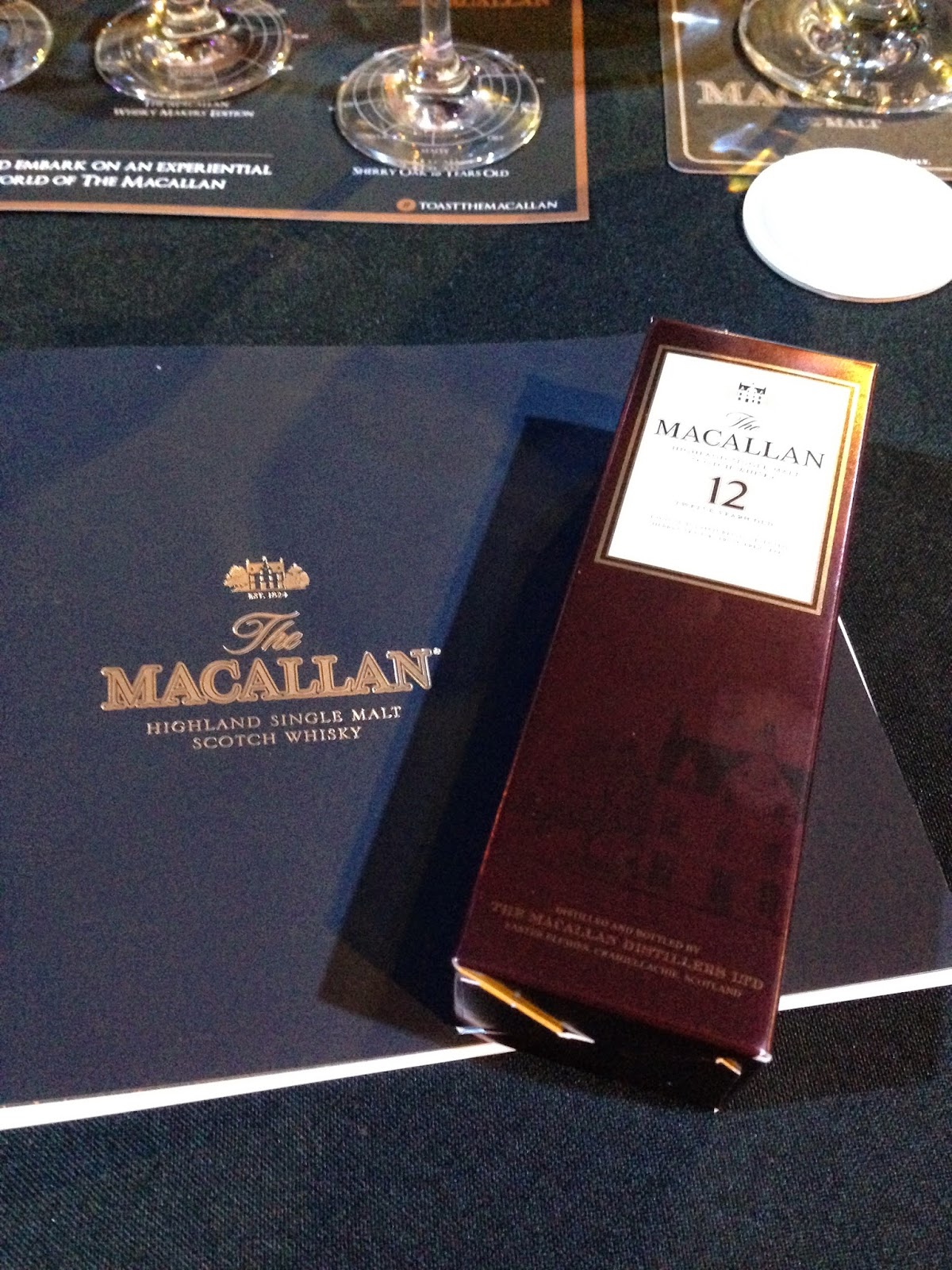 As a door gift, we each received a 5ml bottle of Macallan 12 Years Old (S$10) at the end of the tasting session. We were ushered off to the gift shop and bar where we could ogle at the bottle of the world’s most precious (ie. expensive) whisky: 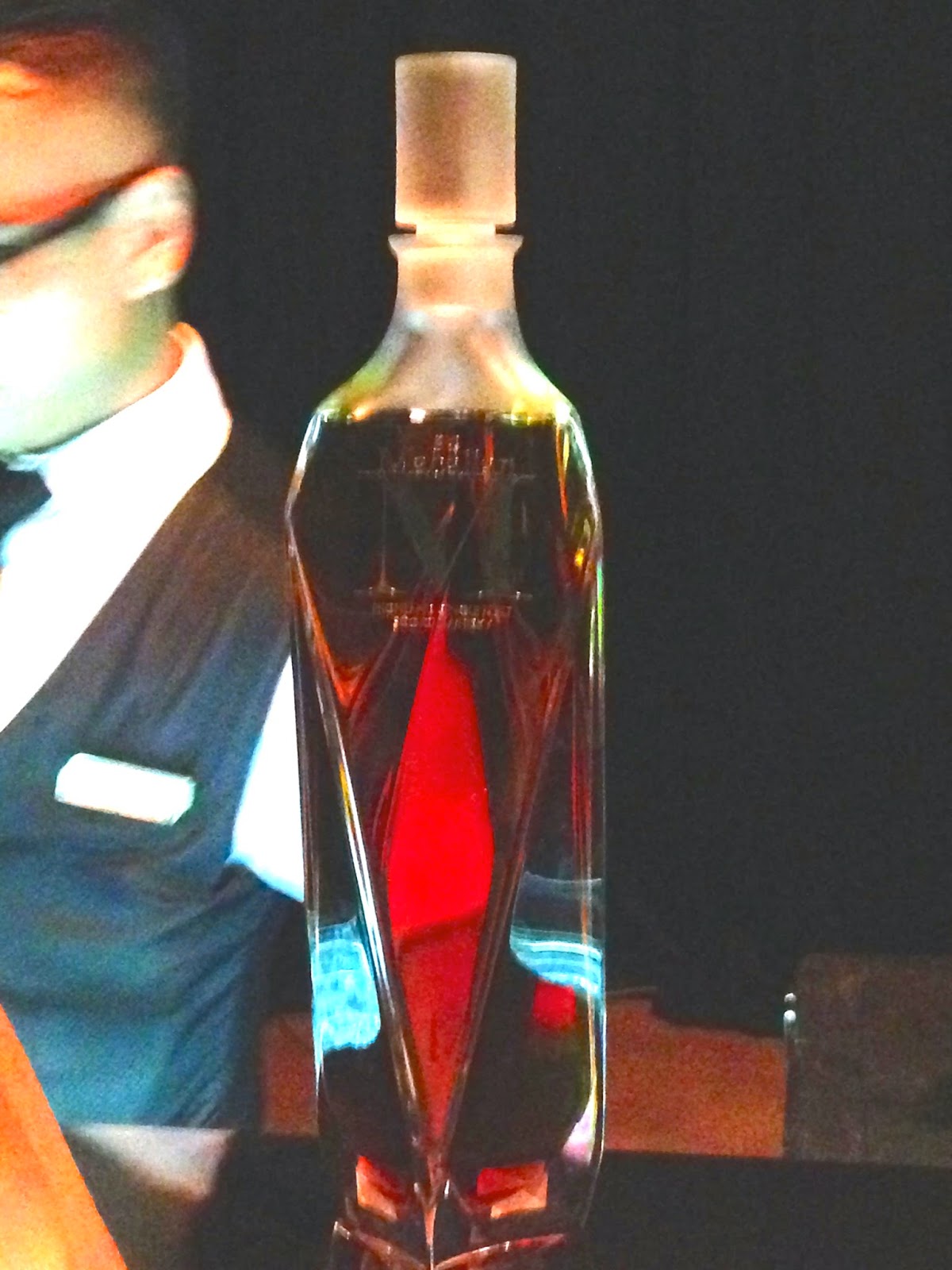 A bottle of the ‘M’ was recently auctioned off for US$628,000 (it went to charity) and a dram was selling for S$250 that day…and that’s the “special” price. In case you’re wondering, a dram is 1/8 ounce but for scotch, it is about a finger of whisky. I joked to my friend that one day, that M is going to stand for Melissa. LOL. 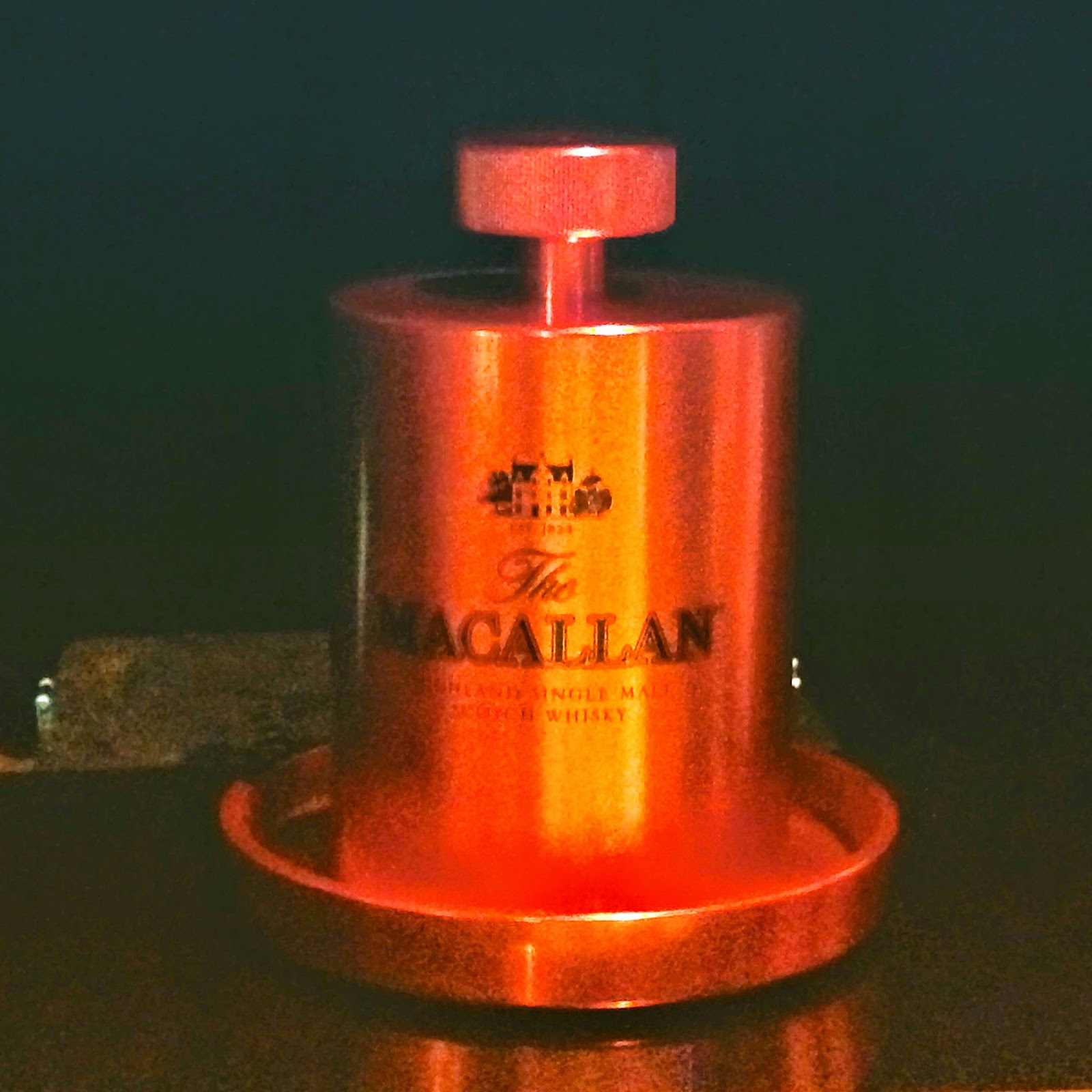 The ‘toy’ that I was really interested is this full copper thing in the image above. It’s the Macallan Perfect Sphere. The Japanese created the carving of a spherical ice to drink with whisky with the idea that a ball has the least surface area touching the whisky and thus, will not dilute the whisky while still keeping it cold. However, not all of us are able to carve balls of ice from a cube. Thus, this contraption was created. It’s a heavy full copper bell-like instrument that uses pressure and gravity to press/shape a cube into a sphere. Pretty cool huh? It comes with an equally cool price tag of S$1050.

Overall, it was a well-organised and well run event which was fun! It really helped with the branding of Macallan and does set it apart from others as it showcases its unique qualities while showing that it’s a premium brand that is still attainable by us mere mortals normal people.

Oh…if you’re flying into Singapore…do let me know how much a bottle of the Whisky Makers’ Edition costs! 🙂