Night Out At Singapore Art Museum

Did you know that entry to the Singapore Art Museum on Fridays after 6pm is free for all? Singapore citizens and PRs get free admission whenever. Just found that out last Friday as Moon and I joined a singles’ event there. Well, don’t expect a blog post about the event because I was really more interested in the art in the end. Below are a few choice pieces that really spoke to me. So…onto the art! 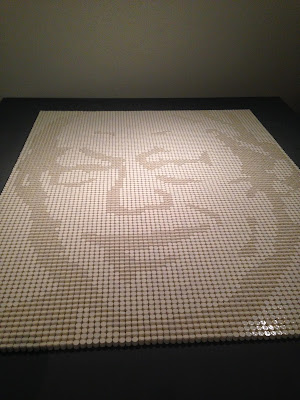 There were 3 ongoing exhibitions and the 1st one that I went to was entitled “Once Upon This Island” so it was about Singapore. I was really impressed with this portrait of our late Lee Kuan Yew simply because it was made totally out of shampoo bottle caps! 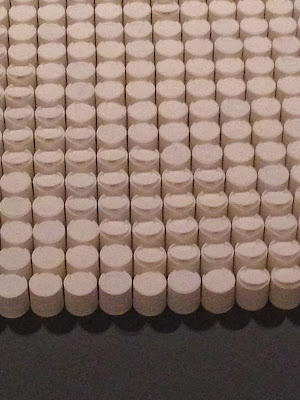 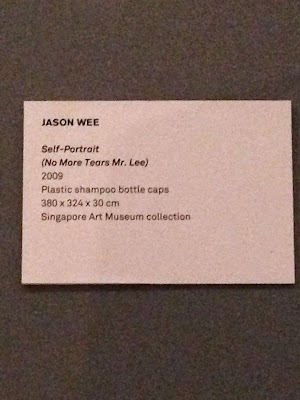 The ‘darker’ shade that made up Mr Lee’s outline was merely from the open bottle caps. And why the title “No More Tears Mr. Lee”? The artist used Johnson’s & Johnson’s baby shampoo bottle caps for this artwork and it is also alluding to how Lee Kuan Yew cried upon announcing the news that Singapore was separating from Malaysia. This piece is particularly poignant considering that Mr Lee just passed away this year.

I like interactive art. Especially if it’s really meaningful, so I really enjoyed the below piece where you get to decorate the front of your HDB flat with stickers! 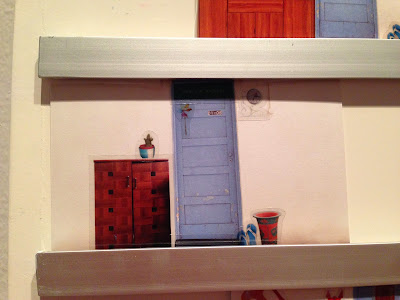 That’s my personalised one! Too bad there were a lot of missing cards and I found it very interesting that in the sticker book, there were tons of Chinese altars and burning urns left unused. Not surprising, considering that most people who do visit our museums are actually tourists. 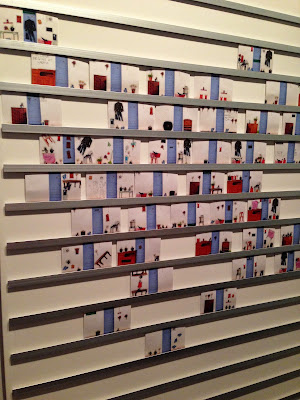 Anyway, you then add them to this whole wall slot area and I reckon that it is to look like the whole HDB block? Pretty cool art work where it allows the viewer to be the artist too! Now…refill those cards! 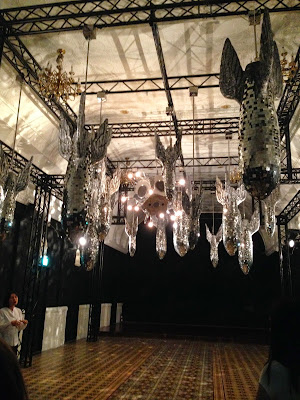 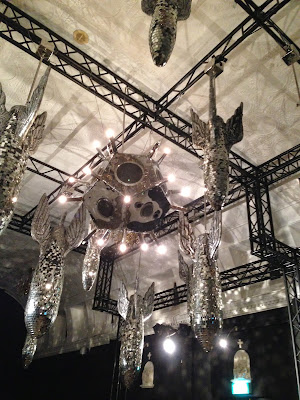 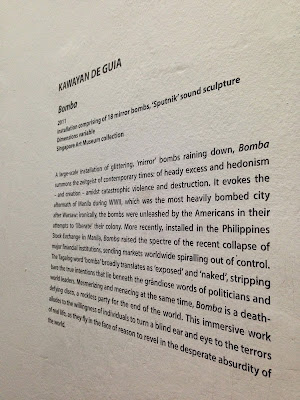 I love big bold pieces of artwork at times and this huge installation entitled “Bomba” was placed inside the chapel (for those who don’t know, the Singapore Art Museum is located at the former St. Joseph’s Institution) and it was so obvious why that place was so apt. Beautiful irony and meaning, considering how it was a statement about World War 2 and the bombs raining down. But it’s peace now and the mirrors on the bombs give it that disco ball effect. All of this in a chapel where it is considered ‘holy ground’ and a place for prayer and peace.

This installation only brings to mind how art is also contextual and when Guia conceptualised this artwork, he was not thinking about THIS particular chapel to showcase his artwork but the curators did give this piece sufficient thought. 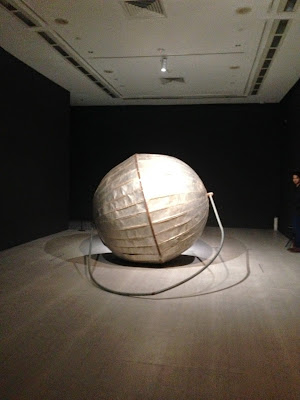 This gigantic metal ball was rolled and pulled along by the artist from Siem Reap to Phomn Pehn. It was his expression of the hardship faced during the war and personal struggles of the people then. 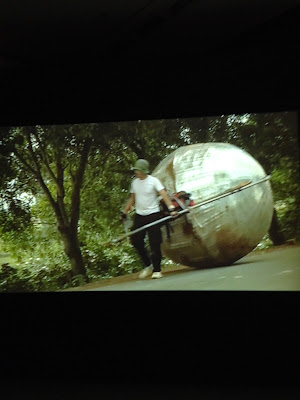 The ball first started off as smooth and round but along the journey, it became dented, dirty, rusty and lost a few screws. You can only imagine how tiring it must have been and his motivation was purely coming from within because I bet you that most people who saw him dragging this ball along the road must’ve been thinking, “Crazy man. Nothing else better to do?” Nonetheless, the end result is powerful and does make you think about how we too are like the ball, getting knocked and dented along the way but we still move on. 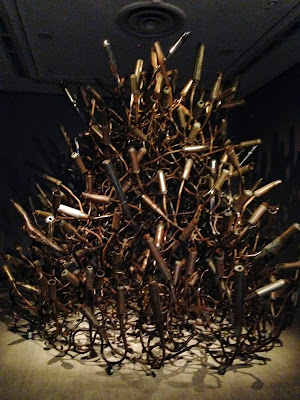 I love chandeliers and I love this piece! It’s made with car exhaust pipes and entitled “Air Pollution” but it’s strangely beautiful. I can totally imagine it as a small chandelier in somebody’s living room/ grunge loft. Probably not the artist’s desired effect but…hehehe. 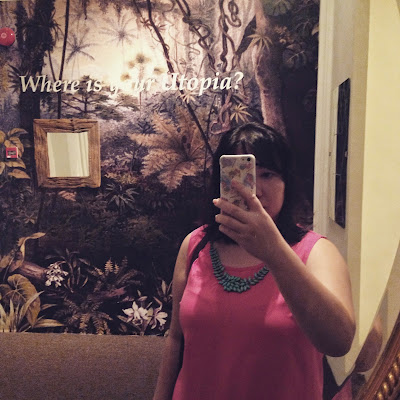 #WhereIsYourUtopia? There’s another exhibition named “After Utopia” but I was more intrigued by the museum’s own interactive mirror and art rather than the actual art pieces that were part of the exhibition. If it’s not clear, I’m actually taking a selfie from the mirror. That means that the words were printed in reverse!

Do check out the Singapore Art Museum (SAM) when you can and do make trips there whenever the exhibitions change! Should be quite fun and I will make it a point to go there periodically! 🙂