Remembering To Count My Blessings 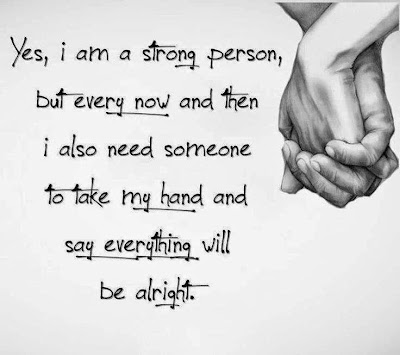 I’m usually the one whom friends come to whenever they need a listening ear, advice or referee. However, in the last month, I experienced a mini meltdown and if I had not recognised the signs, I would’ve probably gone into the super troughs of depression or gone into an anxiety attack.

Why? Simply because I was too stressed out although I am the sort who is able to handle a lot more stress than usual. Post-meltdown, I realised why it had happened in the first place. It wasn’t because I couldn’t handle stress nor was it because I took on too many projects voluntarily. It was an accumulation of deadlines and demands from several parties, pulling me at all sides and I had no control over the pace of my work and work trolls were not helping.

Like a volcano, the eruption happened and I did a rare rant to my boss followed by me just walking away before I broke down in tears in the office. What made things worse was that my period came 3 times within those 3 weeks. Meaning that I was really under Too. Much. Stress. At the end of the day, I simply felt like doing this:

Sometimes you just want to take your teddy bear into the pool and drift away from all your troubles.
Posted by Ramona Humane-Society on Saturday, 28 March 2015

I needed comfort. I didn’t really need someone to hold my hand and say that everything will be alright because I know that I’ll eventually sort things out. I needed to just feel a lot less lonely when I was experiencing that mental state. I needed to motivate myself before I crawl into a dark pit.

And also, to warn people that I wasn’t in the best of moods, I thought about it thoroughly before posting the following on Facebook and Instagram:

On the verge of a meltdown and wanting to escape really bad. Took a moment to be quiet and be by myself, alone with my thoughts. I think I need more time. I have to keep telling myself that “This shall soon pass” and that it’s a matter of circumstances. I need to reset and focus in order to leverage on my strengths.
A photo posted by melfann (@melfann) on Apr 22, 2015 at 9:44am PDT

I was really surprised at the response that I received after the posting was done! 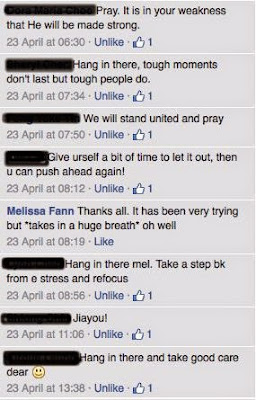 An ex-colleague privately messaged me via FB asking me what happened; my JC friend whatsapped me from the hospital as she visited her new nephew asking me how I was; the topper was a colleague who passed me a mixed tape CD of songs in the morning to help me get through the day. Really brought a smile to my face because I could also remember those days when we painstakingly made mixed tapes but nowadays, it’s just drag and drop…nonetheless, it’s the list of songs that were super thoughtful.

Sing treated me to a foot massage that Sunday and then we had a Sunday roast which I treated her to. For the longest time since I’ve ever remembered, both of us just hang out as 2 friends and chit chat. No babies, no husband of hers and no rushing around.

After this meltdown and receiving the response that I did, I can only conclude that I am so grateful and blessed to be surrounded by people who love and care about me. It’s often easy to know that but to actually feel the love is really not easy and just like how you wouldn’t know what light is without the dark, I wouldn’t have known the extent of my friends’ warmth and how many of these precious human gifts God gave me if I didn’t experience this low. I’m really quite bad at showing how much I love my friends and I hope that they know that I do (eg. I do think about the presents that I buy for each and every one of you so that it’s not a *ahem* photo frame).

Another conclusion? This whole incident (I still do not like to think of it as ONE incident as it’s really a pile up of circumstances) has also cemented my resolve to take steps such that my life is moving at MY pace. Another sign from above was when I came across this article on Yoga and how it taught the writer that it does not matter whether you can do all of the poses or even how well you can do each pose. It’s about being joyous in the moment of doing the pose, no matter how perfect/imperfect it may be. As long as you keep on practicing, you’ll eventually get stronger and better! Life is a bit like a long marathon but it’s not a race. Run at your own pace. Speed up or slow down as per what is suitable for YOU.

I keep going back to last September where I took the whole month off because it was during that period of time where I felt that I was returning to the real me. Where my body was healing itself and going back to what it should be. I was happy.

How apt it is then that my friend and I have planned WellnessYogi RESET. When we planned it, both of us were mere sleeping volcanoes and I had not expected myself to have erupted but I have. I definitely need to reset my mind and body so as to please my soul.