When you’re in New York, you have to watch a musical or a play. Unless you hate either. Otherwise, either go online to book your tickets or stalk the TKTS booths in Times Square for discount tickets. I chose to buy my tickets online because I wanted to be ensured of tickets to “The Book Of Mormon”. Why this musical? Because it’ll never come to Singapore due to our religious harmony act/rule.

Stalking the website Theater Mania for a week, I managed to get the tickets slightly cheaper than its usual price. The discounts aren’t as deep as those in London’s Westend but we still saved about US$20/ticket.

Tip: only buy your tickets online a week prior the performance date. You’ll get the better seats for less. 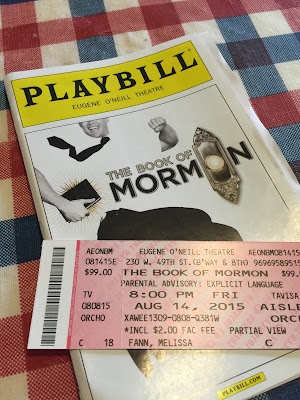 “The Book Of Mormon” is the first musical by South Park creators Trey Parker and Matt Stone. It’s a religious satire where the storyline revolves around the young (and most promising) Elder Price and his partner Elder Cunningham (the ‘outcast’ overweight nerd) who are sent to Uganda on a missionary trip. In Uganda, it is where both Elders had to face their personal flaws and convictions about their mission/religion amidst a village that has been plagued by poverty and attacks from a warlord.

The whole musical was done very South Park style – full of vulgarities, sarcasm, irony and seemingly one-dimensional characters based on loads of stereotypes. I’m quite sure that a lot of Mormons will find it extremely offensive. However, no matter how rude it was and how they made fun of Mormonism being a made-up religion, I liked that their main message at the end of it all is this: it may not really matter if the theology of a religion is made up, so long as they’re helping people, bringing peace and making the world a happier/better place. Sounds really ideal but in a lot of ways, I think Parker and Stone were not trying to tackle a complex issue on religion but to tell people to step back and think about these issues within ourselves and to judge for ourselves.

I thoroughly enjoyed myself and so did my friends although Ken thought that it was dragged out a little too long. I beg to differ. For a first musical, I think that “The Book Of Mormon” was really well done and it’s no wonder that they won the Tony award for Best Musical of the Year a few years back and has been running full shows ever since it started. To me, it’s up there with “Avenue Q” where I was laughing really hard. So, if you ever get the chance, do catch it!