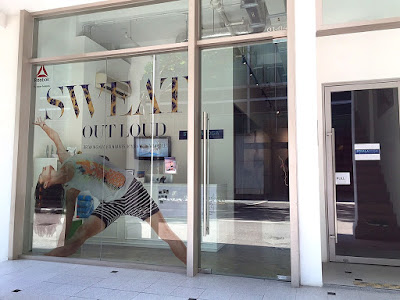 I visited Strala to discuss about Pásshen’s upcoming Beauty Week and Jo was nice enough to invite me down for her Core Strengthening yoga session! I like how bright and cheerful the front of shop feels and when I went upstairs to their “Nice” studio, I was glad to know that they’ve got an outdoor deck where they have outdoor yoga sessions! Too bad the haze forced them to cancel them for this month. 🙁

Strala Yoga started in New York in 2008 by Tara Stiles, a model who is now a renowned celebrity yoga guide, who has been named as the “Yoga Rebel” by New York Times, and has been voted as the “Coolest Yoga Instructor” by Vanity Fair and “Top 100 Most Influential People in Health and Fitness” by Greatest. I found out why during my session as Jo explained that at Strala, they don’t do chanting, nor light incense (although they have essential oils purifying the room) and they play contemporary music throughout the whole session.

So while we were doing the yoga session (which was really intense btw) and I was struggling with some of the poses, we somehow talked about how yoga isn’t about comparing oneself to the other person in the room (although there were none that day) but about self growth. 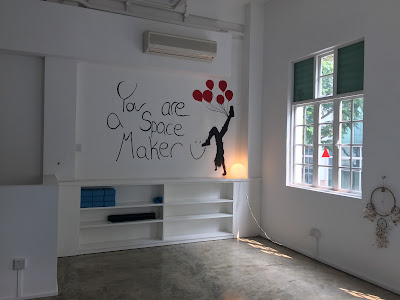 In my year of practicing yoga, I’ve seen so many instructors and they come in all shapes and sizes. A few of them even have muffin tops over their pants! However, all of them are strong, flexible and can out last a lot of cross-fit folks whom I see attempting yoga in my classes. Even for weak old me, I can hold certain poses longer than some people who go to my yoga classes although you’d clearly think that they’re fitter than me when you see their well defined, muscular arms.

No judgement. Everyone is different and my take on it is that in modern society, we are caught up with what the ideal athlete should look like – lean and with as little fat as possible. Doesn’t help that with social media, loads of photos with people doing incredibly difficult poses #yogaporn are popping up everywhere.

However, the aim of yoga is really about knowing your body better and just working towards making yourself stronger and healthier. You create your own objective and ‘space’ as seen in the photo above. That’s also Strala’s philosophy in yoga, where everyone is allowed to feel free, creative and inspired throughout the whole session. Jo kept telling me to feel free to sway from side to side, which was very different from all other yoga sessions that I’ve attended previously.

Do what’s comfortable to you and learn when to stop. As I was recovering from a bout of stomach flu, I got really dizzy at the end and had to lie down. Jo then helped massage me a little and even used some essential oils to help me recover. She said that in Strala, they are also trained in massage and that makes sense because asana (or poses) actually translates to “to sit” and yoga was formed to train students/warriors on how to comfortably sit for long periods of time. If you’re at the limit, don’t stress out and just admit that you’ve hit your limit and then work towards pushing it.

Constantly evolving. We also talked about how Strala Yoga has incorporated some Taiji movement into the poses. I think Master Sim from Wu Tu Nan would be quite glad to know that! Hence, Strala Yoga does throw in a bit more arm movement and ‘swaying’ from side to side whenever coming into certain positions. Fusion of 2 ancient exercises! That’s something really exciting to discover and also goes to show that we too, must constantly evolve and learn.

Gratitude. Know how some right wing religious folks believe that one shouldn’t practice yoga because of religion? Although we can argue with their ignorant view on the exercise, they’ll probably be glad to know that Strala doesn’t do any chanting. That said, I happen to know that ‘shanti’ means inner peace. So chanting it is just about bringing inner peace to one’s self and to those around you. Many instructors also ask you to think about ‘dedicating’ or having an ‘objective’ for that particular practice. I’m usually just grateful to have survived each one, especially if it’s hot yoga! Haha. Jokes aside, I’m always grateful that although it’s not noticeable to many, I have grown stronger in the course of 1 year. I have managed to turn 1kg of fat into 1kg of muscle. I am feeling a lot better about my health AND when my muscles ache due to over-walking etc, I knew exactly how to stretch them out and ensuring faster recovery.

Some people find belonging only when they’re on the mat, practicing yoga. Some have found their sense of community in this niche group. Others are just rocking the fashionable studio gear and others have grown businesses from yoga.

No matter what, we’re all on this journey called life. Let’s keep growing and doing more of what keeps us healthier and stronger!