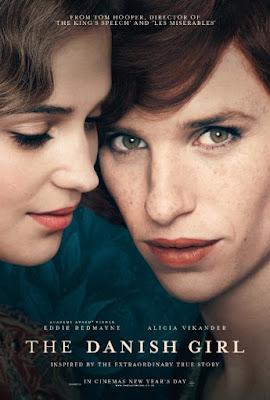 I treated Ming to a screening of “The Danish Girl” and the movie was his choice. I wasn’t surprised that the topic was about transgender and the film tells the remarkable story of Einer/Lili Wegener (played by Eddie Redmayne), the first transgender person to undergo reassignment surgery. The movie is based on a fictitious book by David Ebershoff which was loosely inspired by the lives of Danish painters Lili Elbe and Gerda Wegener.

The film was very picturesque, alluding to the whole idea of a painting and it seemed like there was a constant filter throughout the whole movie. I’m quite sure that this movie will produce some awards this year as Eddie Redmayne as well as Alicia Vikander put up very strong performances as the leads.

I’m very impressed with Redmayne and how he was able to subtlety portray the confusion, then distress followed by determination as he went through the acknowledgement, denial followed by acceptance of how he has always felt like he is a woman. Some critics have slammed the movie for casting a non-transgendered actor in this role but I feel that these critics ought to shut up because it does not matter whether the actor is transgendered or not. What matters more is whether he can act and Redmayne did a splendid job.

It is easy to just see the film as a vehicle to support transgendered people, which is truly is, but what I found more interesting was about the complexity of human gender and sexuality.

In the beginning of the film, we see how in love both Einer and Gerda were, where Einer couldn’t keep his hands off Gerda. It was only revealed later that Einer’s fondness of dressing up as a girl started when he was a child but this was obviously suppressed by his family and society. However, the love between Gerda and Einer/Lili did not falter throughout this whole transition. Sure, it evolved from romantic love to something else but it definitely was not pure platonic love.

That is the thing which kept me thinking. There are so many transgendered people who have married and have children, while still loving their spouses or ex-partner once they’ve transitioned. But I could not understand was, assuming that these transgendered people were ‘straight’, how could they marry someone of the same ‘sex’ , love their spouses romantically and have children? I would understand if this were 50 to 100 years ago where arranged marriages were common but we’re talking about people like Caitlyn Jenner.

To make the whole idea of sexuality more complicated, there was one episode of Oprah that I watched where she interviewed transgendered people and there was a transgendered woman who had been always sexually attracted to women so she concluded that she’s lesbian.

Then that brings me to another stream of thought: would you accept a transgendered person as your partner? I asked Ming (who is gay) whether he would accept a transgendered man who is gay. His reply was, “Not really. It would still think that I’m with a woman or lesbian or…” However, I did see a YouTuber who is a transgendered woman and she has a boyfriend who is straight. As for myself, I’m really not sure because intellectually, I think transgendered men would probably be more emotionally vested than straight men but when it comes to raising a family, having a relationship with a transgendered man would mean that I’ll not have his biological child. I think to some, it isn’t a very big deal but…I can’t say that I have very strong opinions/feelings about this.

As you can tell, the movie really got me thinking about how gender/sexuality is actually a spectrum rather than dual but this spectrum is definitely not linear. Regardless, the film’s important message was that what was more important is about being true to ourselves and having supportive, loving relationships.

Previous postBook Pitch – Are You Stressed At The Spa? Next postSick of Valentine’s Day?