Going With The Flow Through Kalari Yoga

That’s Amanda, the yogi from Real Yoga who has introduced Kalari Yoga to Singapore, and it is also the highlight of WellnessYogi RESET on 11 July! So, being good event organisers, we naturally have to attend a session of Kalari Yoga before declaring it our “highlight event”.

What is Kalari yoga, you may ask? According to the description that Real Yoga gave me, it read:

Kalari Yoga is a rhythmic yoga flow that pulsates with the energy of the sacred circle.
It is as gentle as it is strong, calming as it is energising, and as uplifting as it is grounding.
Kalari is the journey of learning, being wholly present, finding groundedness in flight and tranquility in flow.

If your reaction was “Huh?”, you’re not alone. When we asked Amanda though, her reply was that Kalari Yoga is going back to the more organic form of Vinyasa Flow yoga. Don’t fret if you have more question marks above your head. We too had them. But first, let’s explain something – there are as many schools of teaching and beliefs in yoga as there are denominations in the Christian church…no need to fret over the different types. Just go with the (no pun intended) flow and what feels comfortable to you.

Kalari yoga isn’t new. It has been practiced in Kerala, India and was part of the training of the warriors in the ancient martial arts. Amanda did tell us that Kalari yoga is gaining popularity in the world now because a lot of practitioners are looking for something that is more organic.

There’s the word ‘organic’ again. Just what did Amanda mean? Didn’t know until we actually hit the mats in Real Yoga’s studio.

I don’t like to bang out yoga poses abruptly, or snap forwards and backwards… i like vinyasa that is fluid, transient and graceful. My vinyasa is an affirmation of my strength. My vinyasa is an expression of my grace. My yoga is physical meditation and our practice is a celebration of our yoking, as a community, one in breath and spirit. World Yoga Day is this Sunday! See you on the mat!
A video posted by Amanda Koh (@amandakohkalariyoga) on Jun 17, 2015 at 8:13am PDT

Just like the caption in the above video, Kalari Yoga felt very natural. The meaning behind ‘organic’ hit us throughout the whole 1 hour. The transition from one pose to the next was really fluid and I was amazed at how effortless it felt to move from a half bend, into a crouch and then into a 3-legged dog before going into wild thing. I was even more impressed that I did the 3-legged dog perfectly without feeling any strain because most of us are so used to this sequence: 1. plank 2. downward dog 3. 3 legged dog.

Trust me. It had nothing to do with me getting stronger because I had just recovered from 1 week of flu and another week of hives (ie. no yoga for 2 weeks).

Some of the poses were challenging – I still can’t do a full crow (only able to lift 1 foot up) and no way are my abs ready to do a shoulder stand immediately from a laid down position nor can I do a proper plough pose without using momentum. However, the sequences of the poses felt like how a novel reads, where there’s a calm introduction (breathing exercises) before a build up to a climax and then going back down into a savasana (full relaxation).

We really liked how Amanda’s calming voice added to the chilled out experience, which isn’t something we expected considering how boisterous and fun she is to talk to outside of the yoga session.

Now, imagine how it would be during WellnessYogi RESET itself:
Fireworks go off at 7.30pm as part of the NDP rehearsals. As it dies down, the dome tent is dimly lit with mood lighting and Shamanic Music is playing in the background. Facing the view of the Marina Bay Waterfront, we will go through Kalari Yoga together as a group.

I’m getting excited thinking about the whole thing! Of course, we do hope that you stay with us after the Kalari Yoga session as we go into a chillax after party mode! 🙂 Good news for Amanda’s followers/students as well as members of Real Yoga! You guys get special discounted tickets to our event! Do bug Amanda and check your mailbox for the promo code. 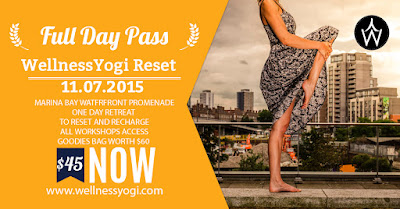